I’m a coffee snob.  I may also be a music snob, a boot snob, and a guitar snob.  I am not, however, a beach snob.  I have friends who think South Carolina beaches are crap.  I have friends who think the Myrtle Beach area beaches are dirty and gross.  I understand that I do not have to agree with them to be their friend or to respect them.  I’ve been to beaches on both sides of Florida and the panhandle and their beaches are nice.  There are probably not many beaches I wouldn’t like.  The beaches at St. Augustine are pretty good.  The sand is white and fine and the beaches are very wide.  One difference from the beaches here is the long distance one must walk to get to the beach.  St. Augustine has wisely protected a wide area of dunes between the beach and the residential areas and this creates a cool little ecosystem in that space.  So while you may have to carry a bunch of beach stuff farther and across a long boardwalk, you may just see tortoises, snakes, and rabbits along the way. 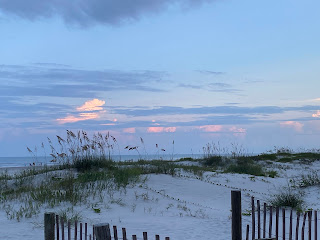 I woke up a little after 8:00 am on Sunday and after my run we drove into town to eat breakfast at a little place we had never tried called The Blue Hen.  It was a tiny, cool little place in the historic district and the breakfast was good.  We stopped by the grocery store to grab supplies for the week and then we went back and got ready to bask in the sun.  This was the last day of the heat wave and the temperatures were expected to be in the mid to upper 90s.  I found some breeze and some cooler air on the beach and after about an hour in the sun, I spent the rest of my afternoon in the shade of the umbrella.  Now I was really in a show about nothing. 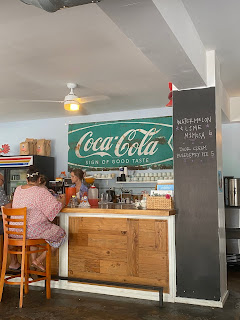 Violet and I needed beach sunglasses.  You can’t use your regular sunglasses for this.  Beach glasses are disposable.  They’ll be scratched, covered in sunscreen, and lost in a few days.  The coolest pair I ever bought were $10 last year and I wore them 20 minutes before they were lost at sea.  I’m not certain Violet feels as strongly about this as I do, but she saw an opportunity for new sunglasses and we jumped in the car after cleaning up from the beach and headed for the local crappy beach store.  We tried on most every pair available.  The idea with beach glasses is that they have to have personality.  These are glasses you wouldn’t wear in regular life.  With some laughter we settled on two pair and headed off to pick up Thai food for dinner.  We attempted to walk on the beach that evening but a huge scary cloud drifted up and the lightning started about the time we started walking.  But there were plenty of sweets in the room so we just started dessert time early. 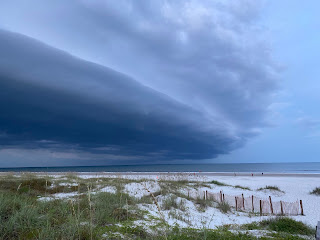 Monday after my run, I ran with Violet.  After that I walked a bit while keeping an eye on Blue when he ran separately.  Monday was cooler and such a beautiful day.  I stayed on the beach most of the day alternating between sun and the umbrella.  The big story of the day was watching this guy near us.  He was my age or older and clearly Scottish.  He talked to several people around him and was very nice.  The cool thing about him, though, was that he had a raging bull tattooed on his nipple area.  The face of the bull was right at the nipple and his nipple was pierced with a ring, making it look like the bull had a ring in it’s nose.  It was kind of great.  The beach was so quiet and wonderful that eventually I fell asleep in my chair.  I didn’t wake up when the tide started kissing my feet and there was a brief moment I was aware that a wave had gone under my chair getting my butt wet.  Soon I sensed someone was near me and I jumped awake.  It was the bull tattoo guy.  He was bent down rescuing my sketchbook from the waves.  He picked it up and was trying to place it on my sandals to keep it from getting wet.  He apologized for waking me and messing with my stuff but I told him how grateful I was that he was trying to help.  Sorry I don’t have a photo of the tattoo.

We ended the day by walking through the old town.  If you’ve never been, it’s definitely worth putting on your list.  The oldest continuously inhabited city in the US.  Lots of parks and historical things and some really good food.  We ate at a place called Burger Buckets and it was really good.  We also got some Hyppo pops and Blue and I grabbed milkshakes at Cousteau’s.  Cousteau’s is worth the drive to Florida on its own.  They only sell waffles and milkshakes.  What a dream come true.  They’re all specialty mixtures and all very good.  The restaurant is themed around the movie “The Life Aquatic” and Jacques Cousteau.  Very cool.  Highly recommended.  It was a good day. 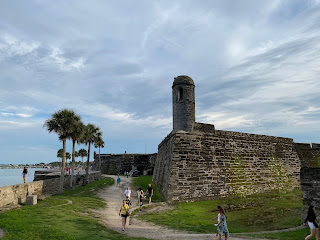 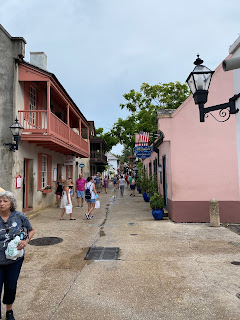 By Tuesday the days started to blur on me a little.  I was getting in the vacation groove.  I’d watch a bit of the Olympics at night and sleep a little later each morning.  I ran, and then usually ran again with Violet.  I made coffee and made my way to the sand to sit and watch people.  Blue was looking forward to going shopping at the outlets in town.  The afternoon was a bit rainy, so we drove to the outlets and walked through.  I wasn’t very excited about this and we did have a bit of a moment when we drove a short distance in search of a Journey’s store that apparently no longer exists.  We followed the map and kept walking by the “x” designated as the destination, but we never found the store.  This was mostly forgotten when we got to eat exceptional BBQ at Mojo’s on the way back.  This was also the night we tried to go to the torture museum.  I know that sounds sort of terrible, but we saw signs for the museum the previous night and decided it would be cool.  When we tried to get tickets the little goth dude inside scared us away by saying that it was strongly recommended that kids under 18 not be admitted and that it wasn’t legal for him to even describe some of the exhibits inside.  Fine.  We left.  But maybe they should reconsider their marketing plan. 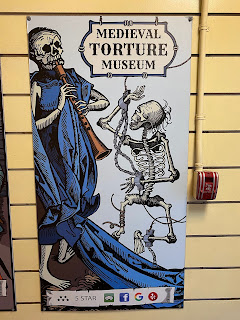 Wednesday was a dreary looking day.  I dodged a bit of drizzle on the beach by scooting under the umbrella a little more.  When the skies got darker, I opted to gather my stuff and head inside.  As soon as I got inside it started pouring.  I napped while the rain slowed down and when I woke up, Violet and I decided it was time to explore the lighthouse.  The last time we were in town Blue and I climbed the 219 steps to the top but Violet didn’t meet the minimum height requirement.  This was her year.  I’m afraid of heights but I love looking out from high places.  Maybe that’s weird.  I don’t like looking down, just out.  Violet waited until we climbed all the way out onto the observation deck to tell me that she was also scared of heights.  We hugged the bright red wall all the way around as we looked out.  The view was amazing.  And though we were both terrified, it was exhilarating to be up there.  It was starting to rain again and we were VERY careful as we climbed down the 219 slippery cast iron steps with our wet feet.  We went through the various museum exhibits and just when we walked in the one farthest from the parking lot, a downpour opened up on us.  We tried to wait it out but it was 6:00 pm and one of the workers came to lock up.  We were soaked by the time we got back to the gift shop. 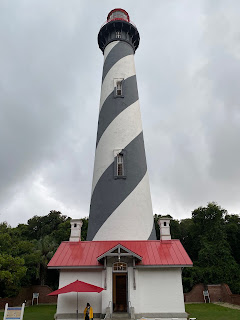 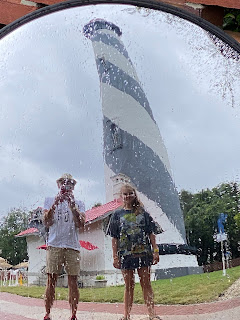 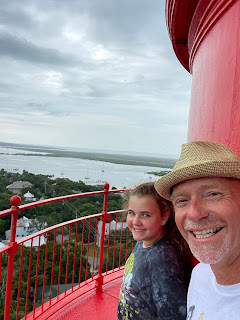 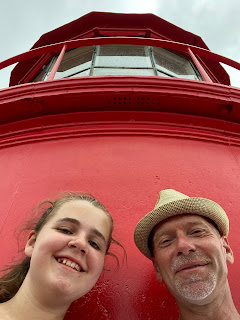 With half of the car riders soaked to the bone now, the four of us tried to go to one of our favorite restaurants and found it closed with a lot of irritated people sitting in the parking lot.  We shifted to another favorite restaurant in town and we may have bought some warm, dry clothes at Marshall’s before returning to the room.

Thursday woke us all up with the realization that vacation was almost over.  We got breakfast at a local diner and then hit the beach.  It drizzled a little but I didn’t care.  I finished my David Sedaris book and had a beach nap.  I may have went inside in the afternoon and had a second nap.  We tried the closed restaurant again and it was open this time.  We drove around a little seeing things we missed on previous visits and watched lightning in the distance.  We ended the day by visiting the Publix bakery and grabbing desserts.  Oh, and I caught a vintage Tom & Jerry cartoon before the Olympics were back on.  That was nice. 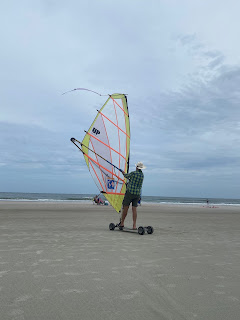 Friday was “go home day”.  It’s always the worst of the vacation days.  We did two runs that morning and worked up an appetite.  We kept seeing this place called “The Kookaburra” in our restaurant searches.  There was one right across the street from where we stayed.  Their coffees were famous and so were their Australian pies…whatever those were.  We decided we needed to know so while we were on our second run, G ran over and got coffees and pies to try.  Dude, these things were excellent.  It was like a little breakfast pie with eggs, cheese, and meat.  The coffee was great too.  I mean, not as great as mine, so I followed my bought coffee with a homemade one.  We all went out for some final beach time and I stayed as long as I could.  Violet and I finally went inside around lunch time, showered, and packed the car. 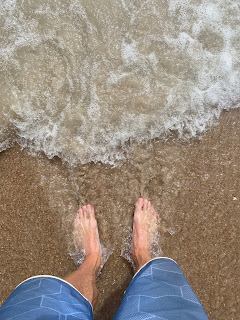 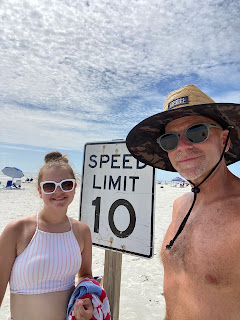 We checked out and drove to a mall in Jacksonville on the way home.  There was one or two stores we needed to go in briefly and we also needed a late lunch.  We shopped fast, hit the food court, and were back on the road pretty fast.  The drive home was pretty easy, though I did make G drive the last hour because my butt was cramping up.  We were home before it was too late and the dogs were very happy to see us.  The car was unloaded and we scavenged the pantry to find sweets before bed.  The credits started rolling on this delightfully boring episode.  Would this be our last adventure of summer?
Find out when part 6 is posted....
Posted by e-sketchbook at 4:28 PM