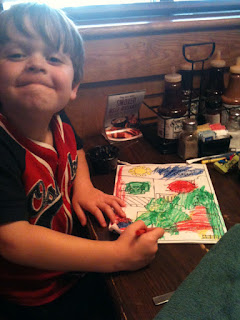 That's right, Blue's first public exhibition of 2D work in a regionally juried art show is now on display for your enjoyment. He was so proud that his colorful page was selected to be hung on the wall. If you'd like to see it just visit the Sticky Fingers restaurant on Woodruff Road in Greenville. You'd better hurry though. I'm not sure how long the scotch tape will hold up. 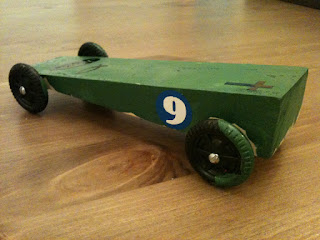 And Blue has masterfully covered both 2D and 3D areas of creativity lately. This is his pinewood derby race car that he created this week in Vacation Bible School. I'm not sure exactly what this means yet but he was the only child in the entire church to paint his car green.

Posted by e-sketchbook at 8:43 PM No comments:

Way back when I was in high school there was an old farmhouse on highway 9 that I passed every day. The house was pretty much falling in on itself and when the folks moved out they proclaimed their departure in an unusual but clever way. With a can of black spray paint, one of them printed in very large letters all the way across the front of the house "WE HAVE MOVED".

I guess that's one way to do it.

These days we are logging on to websites and filling out forms at the post office to declare our exit from our home of 16 years.

We loved our old house. We were less than a minute from the Waffle House, the Bojangles and the grocery store. I had a paved and scenic running track that was exactly 3.1 miles in one lap. I had a lawn I could cut in less than an hour.


But life on the plantation is good. We have to wait 9 extra minutes for Waffle House and more like 15 minutes for Bojangles and the grocery store. My running track is all grass now which is easier on the knees and it takes 5 laps to reach 3.1 miles. The yard takes 12 hours to cut and well, there's just no way to make that sound positive.

But the view from the front porch is nice... 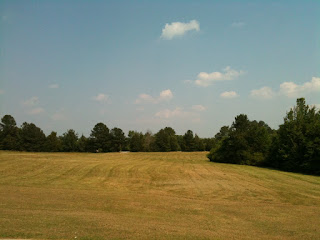 What if I told you that one of these guys just released an album of ukulele music? 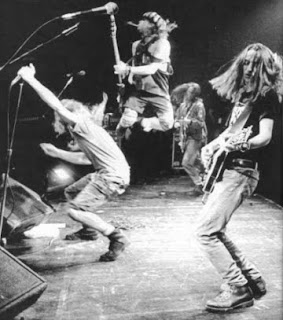 Well it's true. The one on the left is Eddie Vedder and in this photo his is rocking out as lead singer of Pearl Jam. In the early 1990s Pearl Jam was huge part of the Grunge music scene. If you were not around in the 1990s or if you were too cool for these punk kids and their music back then, just know that the music was loud and aggressive. Sometimes you could make out the thoughtful lyrics over the overdriven amps and sometimes you could not. If I'm remembering my college years correctly Pearl Jam featured 3 electric guitars for that multi-layered guitar sound along with an electric bass and a frenzied drummer.

I was not the biggest Pearl Jam fan back then. Call me an old man, but I always gravitated toward their quieter songs. I realize the loudness was part of the experience and it had much to do with the type of emotion being communicated to the audience. It's just that if these guys had gone to great lengths to write meaningful words I really wanted to be able to hear them.

Around this same time MTV began promoting their "MTV Unplugged" sessions. Typically artists from electric bands were invited in to a recording studio and given acoustic instruments and asked to kindly leave the electrical outlets alone. (Clapton's set is still one of the best in my most humble opinion) These sessions were a huge success in part because when the noise was cleared away the real beauty of the melody and lyrics were revealed.

(A related side note: This was also the time period when REM released their acoustic mandolin hit "Losing My Religion" followed by the acoustic heavy album "Automatic For The People" which featured the song "Nightswimming")


In the years since Grunge was grungy and loud Eddie Vedder has gathered some years. He became a father and has fostered some powerful charitable causes. I don't want to say he's grown up because that seems an insult at best. But it is fair to say he's grown. 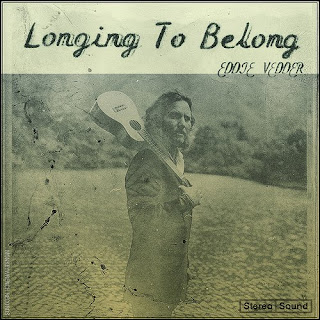 The album is titled "Ukulele Songs" and it is a beautiful thing. From the first note there is a feeling of almost raw tenderness and honesty. Far from the feeling of a large concert venue, this feels much more like Mr. Vedder sitting in one of your dining room chairs staring out the window while whispering some new lyrics over the ukulele he's strumming. All this while you paint the walls in the next room.

Of course, if you don't like ukulele music, you probably won't like this album. It's 16 songs of Vedder's baritone voice and the pleasant meandering of the ukulele. I've enjoyed it while tearing down wallpaper and painting room after room. The songs linger in my head long after the iPod goes quiet. Also lingering there is the notion that age and experience may have allowed Vedder to make this album. It seems that musical artists eventually make their way to a more simple and stripped down means of communication. (I do realize that Bob Dylan moved in the opposite direction and shocked everyone by going electric at the folk festival all those years ago. Still, if you check the vaults Bob has his own MTV Unplugged session on tape indicating that he does bother to check in on the simple side every now and then.)

Is this an example of shedding the unnecessary? Could it be that Eddie Vedder has economized his creative production and stripped away everything that was cumbersome? Maybe he has simply had the privilege of living a life that has allowed him to pursue beauty in expression and he's followed that through to this album. 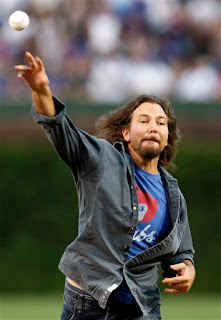 *In the interest of full disclosure I must tell you that Eddie Vedder is a lifelong Cubs fan. This means he has taste, he has patience and that he knows what it's like to experience pain....year after year after year. It also means he is a man of exceptional character. Go Cubs! (next year)