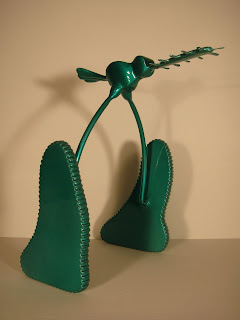 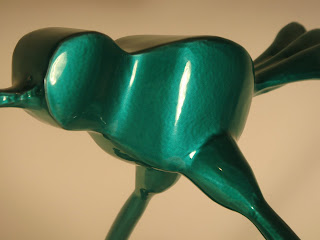 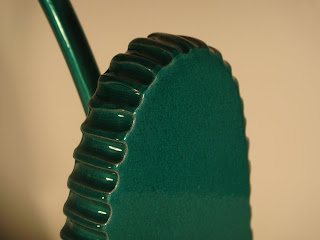 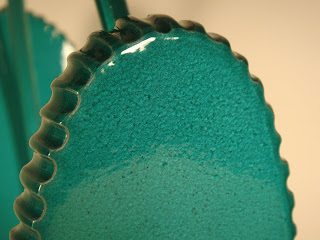 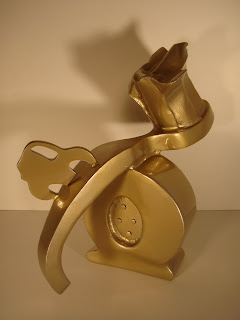 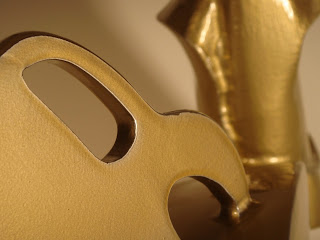 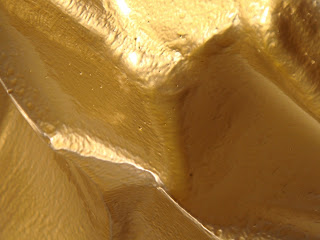 you may ask yourself

You may have been wondering lately.....I thought this guy was some artist or something? Where's the art?

But I have recently finished some new work. Here's a photo of my latest sculpture: 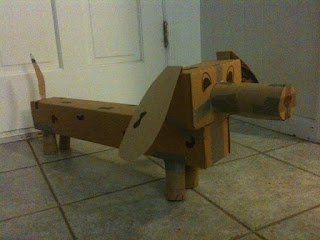 Ok, technically that's just a joke. I did make the recycled cardboard dog with a little help from the 3 1/2 year old but it was just a project for his class as they studied about Earth Day. If I were a good father I probably would have painted it or something but since we were already a day late the Sharpie spots had to suffice.

But seriously I have 2 new sculptures that I'm a little bit excited about...but I just got them home today so you'll have to wait for images.


In other news....
Tonight was the opening reception for the Senior Exhibition at Winthrop. The year-end awards were given as well and and the illustrious Molly Wise won the Outstanding Student in Sculpture Award. Almost four years ago Miss Wise entered my 3D-1 class as an Illustration major and now she is the undisputed queen of all things 3D. Nice work Molly. Here's a photo of her 2 new sculptures created for this show: 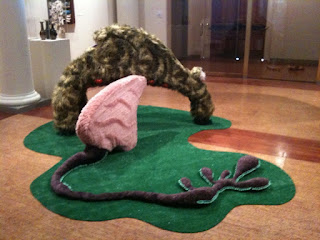 Former and current student Lila Shull took home the award for Outstanding Student in Drawing. I'll post some images of her drawings when I get them from her after the semester is finished.

Congratulations to these three talented ladies and all the other award winners.
Posted by e-sketchbook at 7:03 PM No comments:

photo of some deceased animals below...you may not want to view...but there's so much going on here and it's such a rare find....I needed to save it 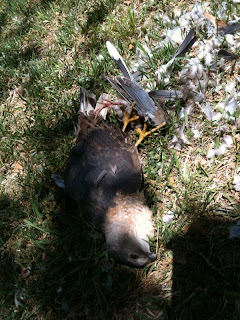 I'm not that old.


Or at least that's what I keep telling myself. My wife tells me this too. It's sort of an unspoken agreement that we have - when we see people we have not seen in a while and they look particularly haggard or aged - one of us will ask the other, "I don't look that bad do I?". And I honestly do not think we are lying when we always answer "No."

*note: if I have run into you after not seeing you for a long period of time, I am most certainly not referring to you here. Honest. It's someone else.


For whatever reason, I'm not sure how a middle aged father of 2 is supposed to feel, so I keep thinking I'm just an overgrown young adult who still likes cool things and still feels young.


Yet there are times when my actual age is difficult to ignore. Like the days I realize that my feet hurt. Of course, this is most likely the result of running 3 miles the previous day, but when I ran years ago my feet did not hurt the next day.


Or like the times when my students point out my age in alternative and unintentional ways. Take Wednesday night for example: A certain student began telling a funny story involving a concert. When she came to the part that included a scene in the "mosh pit", she paused and then said to me, "Wait. Do you know what a mosh pit is?" As if mosh pits were invented in the last couple of weeks. Or, as I took it, I'm so old and out of touch with concert going that I would surely never have witnessed, let alone participated in, a stage-front surge of humans. Dude, I've moshed on several occasions. I laughed at the absurdity of the question.


Then Thursday came and stole my laughter.


I was presented with the very convenient offer to go see Sequoyah Prep School play at a college about 10 minutes from my house. This is a great local-ish band you should look up and then maybe purchase an album from them on iTunes. I really wanted to go. But I have 2 kids and you'd be shocked at just how little time there is in an evening after dinner is served, baths are given, PJ's are put on, and teeth are brushed. So what did I do?


I went to the concert.


OK, not that concert, but we did go to a concert. First we enjoyed a selection by Blue... 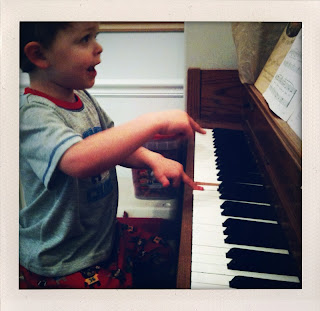 And then we made our way downtown for the lead act, Dr. Thomas Moore... 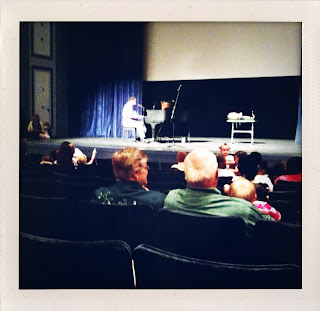 Dr. Moore is a writer and performer of kid themed stories and songs... 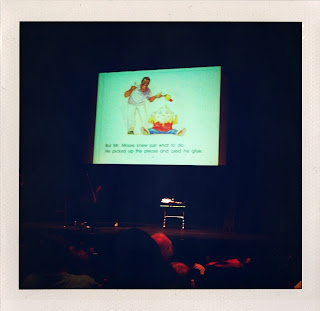 He is depicted in cartoon form in the projected image and if any of you illustrator types notice the little inside joke...well, then that would mean you're at least as old as I am. And you used to listen to really bad hip hop music. 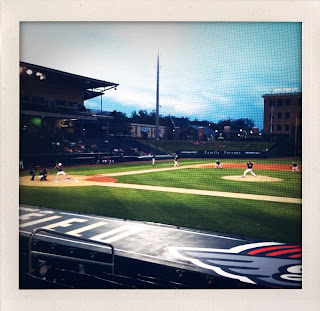 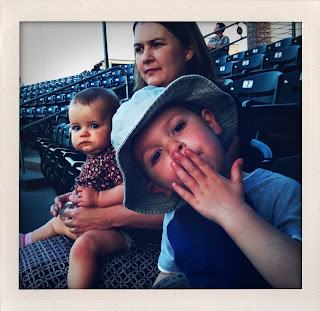 My nephew's team won the championship
. 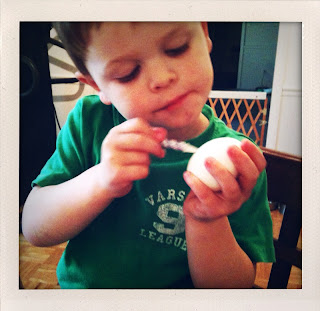 Decorating with the invisible crayon
. 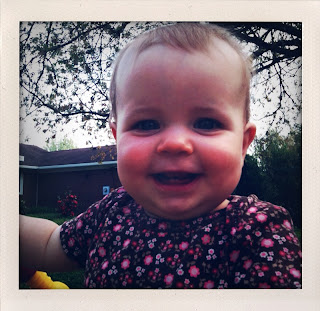 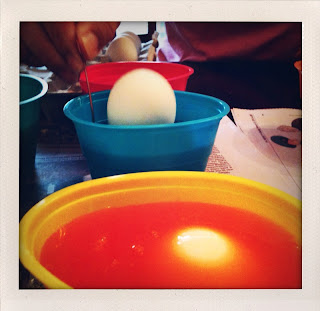 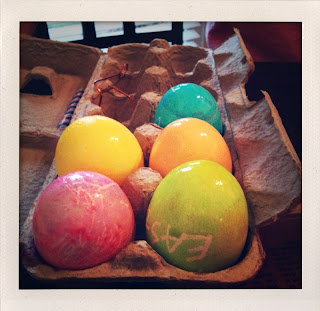 Now that the season of Lent has come to an end I face a rather difficult decision. I mentioned in an earlier entry about my non-traditional approach to Lent and explained how I was essentially giving up saying negative things about people for the 40 day period. I bet you're just dying to know how that went, right?


One of the first things I noticed in my struggle to retrain my words was an increased amount of laughter. Of course, I laugh a lot to begin with, but with this new set of rules of engagement I found myself encountering some awkward conversational moments. Perhaps I'd be talking with my wife and the door of opportunity would open. There it was...just sitting in the air like a hanging curveball just waiting to be smacked. Normally I would have taken a shot, said something negative and the conversation would have seamlessly moved along. But not this spring. For the last few weeks when this type of opportunity has presented itself I've had to literally stop talking. This pause almost always stopped the conversation and for the first couple of weeks it really irritated my wife. In those moments there was nothing I could do but laugh.


Eventually she started laughing at the situation too though she remained irritated about my inability to tear into someone who was so obviously asking for it. One of the things I'd say to remind her of the reason I was abruptly changing the subject was, "I can’t talk about that until after Easter". Then we'd laugh and move on.


The laughter also made its way to the highways. Since I spend a fair amount of time on the roads I have a high chance of encountering roadway mayhem. I saw a lady driving 70 mph on I-85 taking up both regular lanes and the emergency lane while she held her arms through the steering wheel and texted furiously with both thumbs. Several people turned across lanes and nearly swiped my vehicle. One trip to Rock Hill last week I had 4, count them, 4 people pull out right in front of me in the fast lane. What could I do? Laugh. It was my only option. Usually after laughing I'd remind myself that I should be positive and welcome them to pull out in front of me or use my portion of the road because I had no idea what sort of traumatic experience they might be going through. Sure they may have looked like punks who couldn't drive, but they may have been on the way home from a particularly depressing divorce proceeding or from a terrible doctor appointment. They may have more on their minds than not making Doug angry.


The interesting part was when my laughter and attempt at positivity began to be contagious. I noticed this a couple of weeks ago on the way home from work. I drive through some serious country roads on that trip and at one point this lady in an SUV made a very, very wide turn because of driver inattention. I saw it coming (one of the added perks of this endeavor) and I stopped well short of the intersection to allow her the right of way. She quickly corrected back into her lane and by this time I was sitting there near the cows just laughing out loud at the situation and my inability to negatively comment on it. The lady saw me laughing and she slowed down, smiled and waved the international "I'm sorry" wave. I'm sure I've heard somewhere that bitterness breeds bitterness, so I suppose the converse is also true. Perhaps positivity breeds positivity.


The other thing I learned was that when faced with the potential for negativity, I do have a choice. I am not obligated to respond to ignorance with negativity. Sure it's sometimes funny and often convenient to do so - but is it wise? During this time I had a particular opportunity to completely level someone over an immature act. In years past I would have launched into a vicious personal attack and I would have used every single resource available to rain down fire and brimstone on such a person. But while I was angry for a short time I soon found that the initial flame of anger subsided when I refused to pour gasoline on it. With no fuel, the whole thing just died out. And now it's just kind of funny on a lot of different levels. I may not have laughed at first, but I continue to find humor in it now. Too often we fail to realize that things like this just take care of themselves. It's not my job to take people down. I'll leave that to Chuck Norris.


With Easter behind me would I be free to take up the list my wife has made for me? She's kept a running tally of all the things we need to remember to talk about after Easter. I think our friend Ginger may also have such a list. So do I walk away from this experience and toss out the things I've learned along the way? I suppose that would be foolishness. Maybe it's not a good idea for everything to be brought back to life.
Posted by e-sketchbook at 6:01 PM 3 comments: