L to R: SandySingletary, Elizabeth Snipes, Tom Pitts, Jim Slagle, Linda Neely, me & jon holloway
We baked Professor Slagle a bacon cake for his birthday last week. No, the cake did not taste like bacon nor did it have bacon in it. It was merely sculpted and colored to resemble a huge, tasty slab of the delicious meat.
Posted by e-sketchbook at 7:29 PM 2 comments: 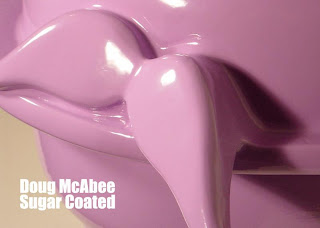 
The commute to work. A conversation with his wife. The funny thing his kids did this morning. This is where Doug McAbee's Sugar Coated ideas come from. His interest in the power of color, beauty, and humor in visual communication continues to inform his work. McAbee's artwork often dips into serious or sinister subject matter, but always does so with a sense of humor, a shiny color, and a spoonful of sugar. His drawings often incorporate graphite with color ink and can mix well-rendered images alongside more hastily sketched images. While each image used in a drawing or a sculpture holds a significant personal meaning to McAbee, he is interested in how these meanings shift when unrelated images are fused together. McAbee is even more interested in how these images and forms almost always take on new meanings in the eyes of the viewer.

Sugar Coated will open on August 15 at Greenville Tech's Greer Campus Galleries. The work will be on display until September 30 and can be viewed from 8am to 8pm Monday through Thursday and 9am to 5pm on Fridays. Doug McAbee will be on hand for a gallery talk on Wednesday, August 24, 4:30pm. The Greer Campus Galleries are operated by and for the faculty and students from the Department of Visual and Performing Arts at Greenville Technical College. The Greer Campus is located at 2522 Locust Hill Rd in Taylors, South Carolina. For more information call Gallery Director Enid Williams at (864) 250-3059 or visit www.gvltec.edu/vpa and click on Greer Galleries.
Posted by e-sketchbook at 1:56 PM No comments:

back in the ussr

An internet stroll turned into an image search which led to this very odd find. It was like finding a whole room of people talking about you while you were sitting right there in front of them.
I never new my work was about democracy and the "freedom of action within human laws".

American sculptor Douglas Macabi (Douglas McAbee) weirdo. Not only that, he writes in his biography, was raised by wolves like a balloon, in deep space. It also creates a painted steel sculpture unusual, resembling aliens, monsters, or well out of the animated film "Monsters, Inc.", which in their unpretentious simplicity reminiscent of children's crafts clay. But people, however, I do.


His artistic career began as Douglas Maccabi graphic designer and worked in this field for over 15 years. But at some point he realized that the call is still waiting for him somewhere else, and that the time for self-realization, there are fewer - and found a lesson for everyone. So, for now Maccabi is a professor of art at Lander University in the U.S., and creates its own unpretentious sculptural installations made of steel, to the delight of myself and the people for amusement.


Sculptures Douglas Maccabi resemble, as already mentioned, alien beings, but as for me, there are more similarities with the Soviet playgrounds that were built in parks and gardens in the distant 70th - 80th of the last century. You remember them, swings in the form of dogs, slides in the form of elephants, and other "attractions", created for children by unknown masters.


Although, if no kidding, the bright-color abstract forms, invented by the author, looks quite interesting and even pleasant, if not look for hidden meaning in them, and be perceived as another fad pretty weird creative person Maccabi Douglas (Douglas McAbee).


Comments
•
Dennis_Churaev 3/19/2011 8:33 p.m.
In my opinion, the general style of a few "children." Not bad would suit to decorate children's playgrounds. However, although I would hardly put it all in my apartment, some products I like ... More precisely only the trees on the latest photos. It is unlikely that I would have bought something like "a green tree on wheels. Well, I love crafts of iron, so thanks for the picture interesting.

•
charmik6 3/19/2011 9:57 p.m.
In fact the aliens are very suitable for children's playgrounds or parks. The child sees the figures in his imagination. It's very simple and unpretentious, childlike. The author really came down to us from the "deep space". I myself would have bought a couple of aliens (but only for a symbolic price) and would put them in the garden, somewhere near the bench.

•
SVENN 3/19/2011 twenty-nine past ten p.m.
Although I do not quite understand how the interior can be used for most of this design, but these glands I definitely like it.

•
luckshmie one forty 03/20/2011
but what have the interior? your home is worth a lot of sculptures?

•
Oxan 3/19/2011 10:33 p.m.
Find creative solutions that will attract the attention of modern society is very difficult. It seems that even the author does not aspire to complex structures, but rather seeking the simplicity of forms and ideas. Unpretentious metal sculpture reminiscent of children's creations, and it is close and understandable to everyone, even to buy and put them into your home not everyone wants.

•
luckshmie 03/20/2011 1:42
so what have your own house? :) It's probably for garden decoration, or for cultural and entertainment centers, restaurants, in general, non-residential premises.

•
bija088 [LiveJournal] 03.20.2011 six twenty-nine
Democracy, what is good, his freedom of action within the framework of human laws, too, in art, like a man this way of working, let them work

•
lyalyaka123 03/20/2011 10:42
but what no meaning here is, I think uverena.mne everyone in life has ever created such things as a child. just before their call was not accepted and art exhibit on display

•
maestro999 3.20.2011 1:19 p.m.
Cheerful)))
Very similar to children's toys)
I really liked this creation in its simplicity and originality. Not everyone is to conceive of such. I think that these sculptures will be very even to the point in children's institutions, venues and parks.

•
rustdotko 03/20/2011 4:38 p.m.
Every man to his own taste. As I duck these masterpieces are not very much, but as anyone. Although the work was carried out qualitatively and with a peculiar taste. 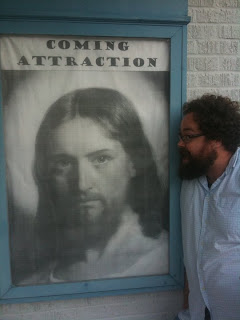 Congrats to newly minted Professor Donovan McAbee (he's the one on the right).
Here he is comparing beards with Jesus before heading off to start his job as a religion professor at Belmont University.
And before you ask, no, we are not related. He's from a different set of McAbees. They have hair.
Posted by e-sketchbook at 7:12 PM No comments: 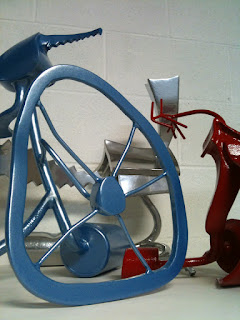 One new drawing and three new sculptures have been added to the website. Go on and have a look.
Posted by e-sketchbook at 2:04 PM No comments: