You have to have music for your summer and if you're looking for something good, allow me to make a few suggestions. Here's what's been in heavy rotation on the ipod lately:

And if you'd like to hear the Avett Brothers perform 3 songs live for NPR, just follow this link:

That little concert is also available as a free video podcast on iTunes if you're into that sort of thing.

The 'less than three year old' enjoys his music too. He likes to sit at his mother's piano and bang out tunes while making up stream of consciousness lyrics about anything in his immediate visual environment. Apparently he also thought the black and white keyboard layout was a bit boring and decided to add some color when no one was looking. 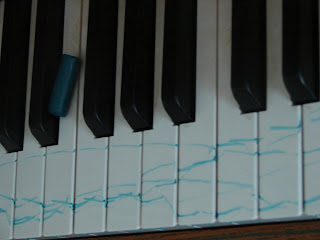 Please be washable crayons.
Posted by e-sketchbook at 7:05 PM 1 comment: 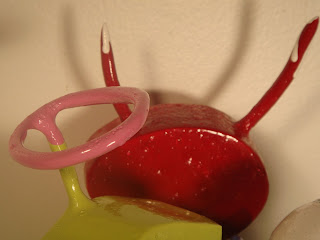 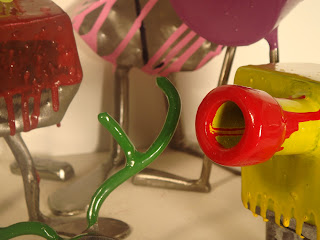 The Hooligans have arrived. 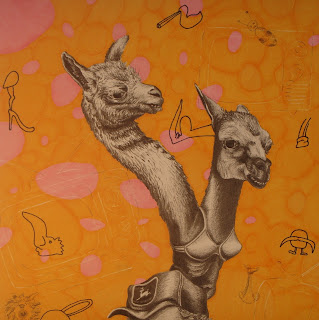 Along with a new drawing.
Posted by e-sketchbook at 12:59 PM No comments:

The Hooligans are coming.
Posted by e-sketchbook at 6:15 PM No comments:

Before reading that actual verbal exchange I'll bet you never thought of a squirrel and chicken nuggets at the same time. Those two images are not logically related based on our normal life experiences so when we are force to think of them together we may be at a loss for how to respond. The pairing is strange and the unexpected nature of such a juxtaposition may cause a reflexive laughing response. But what happens when you think further about the relationship between the two images?

For a 2 year old to connect the squirrel and the chicken nugget so effortlessly there must be bridge between them...at least on some level.

For a rational thinking adult it would seem absurd that a squirrel would eat food processed and prepared by humans for human consumption. Yet to the child this seems completely plausible. Squirrels eat food. Food is defined as the things I eat. I eat chicken nuggets. This series of facts leads to the natural conclusion that squirrels eat chicken nuggets.

OK, try this one: You tell a child that his toy doesn't make noise anymore because the batteries are dead. He understands and the next time a toy doesn't light up he says, "Daddy, because it's batteries are dead?". He's got it.
So when the family pet goes on to that great big doghouse in the sky where all great warrior dogs gather for their final feast, you try to explain that Mr. Sparky will not be coming back home because he has died. And without missing a beat the child says, "It's OK Daddy, we just need to get him some new batteries!"

Not quite as funny, but you get another great pair of odd bedfellows.

When I combine seemingly disparate images in my sculptures and drawings the relationship between the images may not be immediately recognizable. There is certainly a connection between the images...a logical or illogical bridge but a bridge none-the-less. The idea is that the viewer will not walk up to the work of art and immediately "get it" and move on to something else. The hope is that I have provided enough intellectual bait to engage the viewer into thinking more about the images and why they might have been used together. After all, these things may be funny at times, but they're not jokes.
Posted by e-sketchbook at 4:09 PM No comments:

No Art This Week

The new McKid has arrived and she has taken away my ability to think clearly. I was literally 30 minutes from finishing up a big sculpture project and about an hour away from finishing up a new drawing when I had to hurry away for more important business. Now I've lost my train of thought and can't even remember what I was doing. 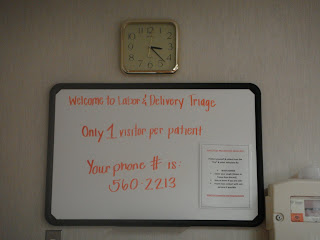 Photos from "Shared Delusions" the show at the Waterworks Visual Art Center in Salisbury, NC with Barbara Schreiber: 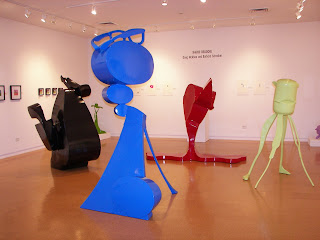 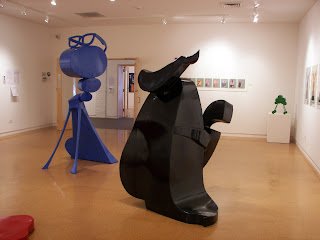 Barbara's work is very cool and if you've never seen it, check out her site at barbaraschreiber.com.
I was asked four times at the reception how long I had known Barbara and how many shows we'd had together. I had to tell all four people that Barbara and I had never even met. However, we did meet later that night and she's great. Our work deals with very similar ideas and we both chase after images that are intentionally vague.
The reception had a great turnout and those who came early were treated to an artist talk by Marge Moody. Marge's acrylic paintings are on exhibit throughout the Waterworks and it was very interesting to hear her speak about the idea of "thin places" and how she seeks to communicate those places through many of her paintings. "Thin places" refer to physical locations where the veil between the physical world and the spiritual world is very thin. These places feel special to us for reasons that we can usually not explain logically.
The exhibitions manager at the Waterworks is/was Sarah Leonard and she did a spectacular job at organizing, scheduling, and arranging this exhibit. I say "is/was" because the night of the reception was her last night as an employee. As she moves on to grad school the fine people at the Waterworks Visual Art Center will have some very large shoes to fill.
And one more thing.........
the hooligans are coming.
Posted by e-sketchbook at 4:05 PM No comments:

We don't spend a great deal of time thinking about how things get transported from one place to another. When you order the "catch of the day" at the seafood shack in Charleston you may not care to think about how that fish was not really having a delightful swim in the local waters just hours ago, but was actually raised in a dirty pond in South Korea and was shipped in a box of ice halfway around the world in order to land on your plate complete with two side items. You'd rather just enjoy the taste of the fish and think happy thoughts.


I'm guessing most people don't spend a lot of time thinking about how the paintings and sculptures get transported to the local gallery either. You simply go in, view the objects of beauty, and think about how crazy the artist must be to have come up with those ideas. I've mentioned earlier that making art is not exactly the easiest thing in the world to do. After spending months, weeks and/or hours perfecting a work of art you'd like to think your job is finished. The reality is you still have to get these objects of art to a location where they can be viewed by the public. And this is not as easy as it sounds.


Sure, you can take these things down to UPS or FedEx along with a huge wad of cash and have them pack the work up and allow them to take your retirement fund to cover the insurance that will be involved. If you want a good laugh, go ahead and scrawl "FRAGILE" across the box in bold letters. I'm pretty sure that's like painting a bulls eye on the box.....but then I can only speak from my experience with broken glass, ruined frames, and scratched paint.


Your best bet is to hand deliver your work. No one cares about your artwork as much as you do and this really is one of those situations where if you want something done correctly you must do it yourself. And if you happen to create very large steel sculptures this may be your only affordable choice. So do you just tie those puppies to the roof of your car and head out? Yes, if you want to ruin your car and your sculpture. Tie a rope around shiny paint and let it wiggle around in 70 mph winds and you're not likely to still have paint there when you arrive. Sculptures like the ones I create must be wrapped, padded, crated in wood, and then tied down for the safety of other motorists. And if you have 8 to deliver at once it might look a little something like this: 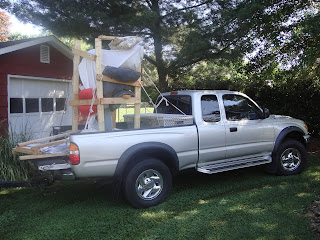 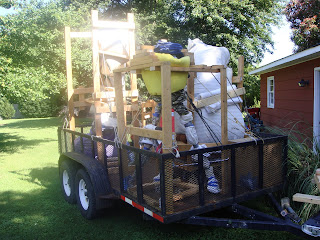 Yeah, I know. Hideous, right? Just imagine what all the drivers and passengers going by on the interstate are thinking. I've had plenty of people roll down their windows at traffic lights and ask me what the heck I've got in the trailer. I'm pretty sure my neighbors think I'm involved in some sort of odd smuggling ring. But, ugly as it is, this seems to get the sculptures where they are going without damage.

This load of 8 sculptures was delivered to the Waterworks Visual Art Center in Salisbury, NC last Saturday. There were 2 weekends devoted to prepping and crating and one weekend devoted to loading, delivering, and installing the work. Three of the four large scale sculptures have never been shown before and I was a bit relieved to see all of them together in the same room for the first time. The colors and forms work very well together and I think the show is going to be great. If you get a chance, go to Salisbury this summer and check out what I found to be a pretty interesting town and stop by the Waterworks to see some very colorful and interesting paintings and sculptures. You can read some well written descriptions of the exhibits by following the link below.