Spring semester is always so busy but it also provides some of the high points of the academic year.  One of those is, of course, plaster pouring day.  Plaster pouring day in 2020 was one of the last group things we were able to do before getting kicked off campus and into quarantine.  I honestly wasn't sure what it would look like this year with new considerations, but we were able to work things out just fine.

There was one glitch, though.  I'm only teaching one of our three freshman design courses.  I had planned to ask if I could help out on plaster pouring day like I did last year.  Before I could ask, my colleague was forced into quarantine and unable to be on campus for the big event and asked me to fill in.  I was happy to do so.

Here's the summary in photos... 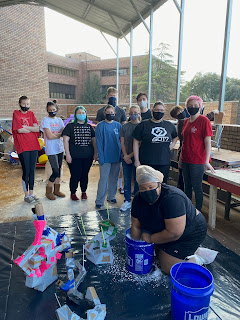 The "before" photo of the morning class featuring Asia, who just loves to come help out every year.  I love her. 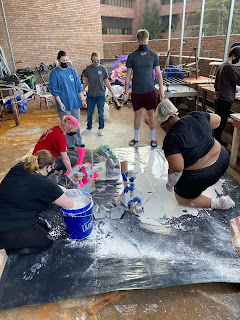 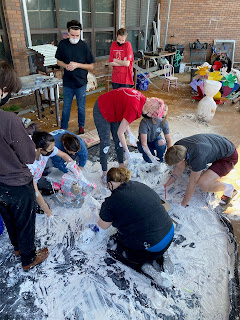 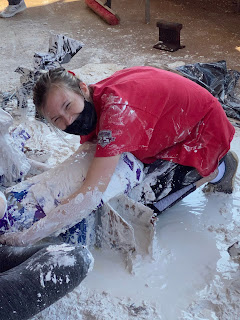 Sometimes you just have to jump in and hug a leaking mold. 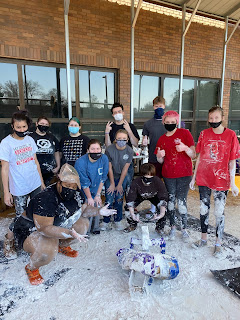 The "after" photo.  Much better. 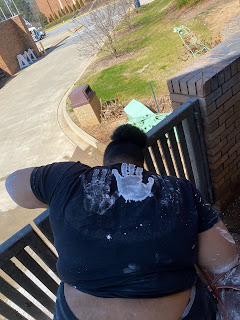 Asia deserved a pat on the back for her outstanding efforts. 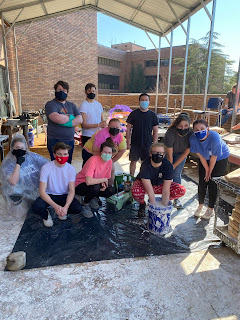 The afternoon class
"before" photo. 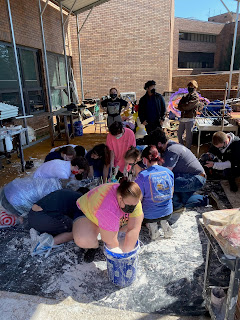 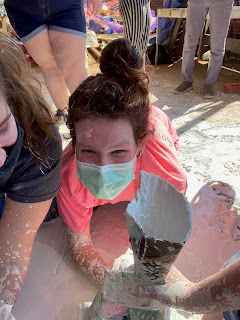 Smiles amid the chaos. 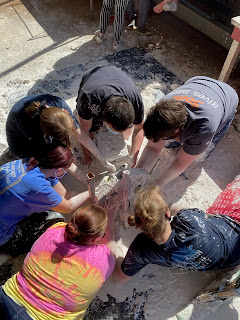 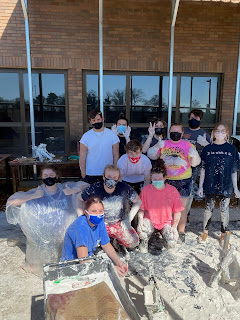 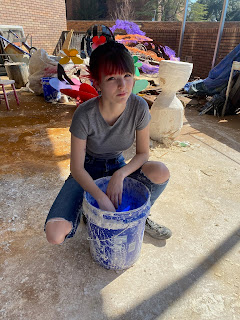 Jocelyn was there to spectate and we were able to recreate her photo from 4 years ago. 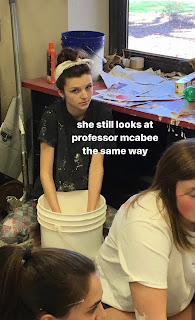 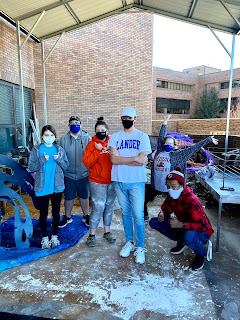 Then it was time for my class.  The "before" photo. 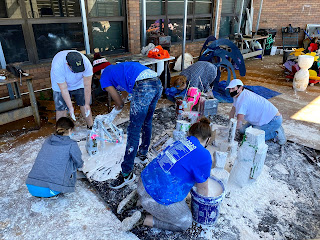 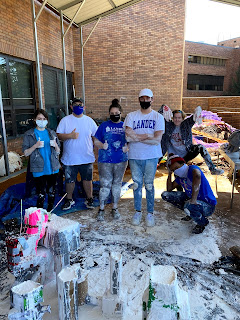 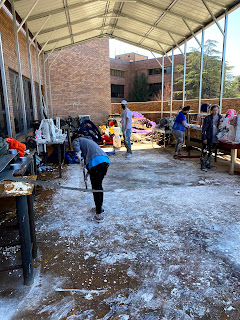 We were lucky to be able to work outside this year but the sculpture deck still hasn't fully recovered.
Once again I was able to watch students come out of their shells and begin to work together as a team.  The sense of community was much stronger after this experience.  Long live plaster pouring day!
Posted by e-sketchbook at 5:53 PM No comments:

you don't even know how to pronounce his name

I need to get this off my chest:  Theodor Seuss Geisel was not a racist.

Additionally, his children’s books are not racist, morally corrupt, or downright evil. 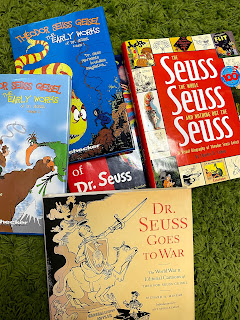 Let’s start with my biases.  I am a major fan of Theodor, the artist who took the pseudonym “Dr. Seuss” as both a joke and a marketing move.  I’m also a middle aged, white, male so admittedly, being sensitive to the most current racial and regional stereotypes is not a strength of mine.  Neither of these facts, however, prevent me from making a few objective observations.

A few weeks ago I noticed some internet outrage that literally stated “Dr. Seuss is racist”.  Most of these were connected to teachers of small children who were seeking to remove books from their school libraries that they deemed insulting to various cultural groups.  You know how the internet works.  If you saw it online it must be true.  No need to verify anything.  I noticed that the Dr. Seuss estate had issued a statement about the accusations and presented evidence that not only was Ted Geisel not a racist, but he intentionally created fun books for all children designed to help them with reading skills and to provide positive life lessons.  Another day of internet accusations went by and I saw more people on the cancel bandwagon, so eager to dismiss a man’s lifetime of work because of sensitivities that did not exist in 1937.  Next the estate removed 6 books deemed offensive from publication including “And To Think That I Saw It On Mulberry Street”.

I realize that many people think that Dr. Seuss is only the books they had when they were kids.  Fewer realize he worked in advertising, served in the US Army, created fine art paintings and sculptures, and once penned a very “adult” book as a joke to his friends.  Fewer know that he was a liberal Democrat with very progressive ideas.  Or that his wife committed suicide, leaving him distraught in his 60s.  Or further, that people have been writing articles and dissertations about misinterpretations of his work for decades.  Maybe the most important thing for people to know about Dr. Seuss these days is that he was continually updating his classic books and their illustrations as he became more culturally aware.  He was evolving with the times and learning.  He was changing.

Do you remember that time you said or did that really bad thing?  I mean, you were young and you were with that group that made it feel like it was not so bad.  Maybe you said something really hurtful to someone.  Remember the look on their face and the pit that opened up inside your chest when you realized what you did was terrible?  Should that thing you did be held against you forever?  I mean, maybe if you kept on doing it, but what if you never wanted to feel like you intentionally hurt someone again?  What if you worked the rest of your life to not repeat that mistake?  Wouldn’t you want people to allow room for you to grow?  Don’t you deserve to be able to change?

Those 6 Dr. Seuss books contain images that are culturally insensitive in 2021.  Some of those books had already been updated over the years.  I would imagine that if Ted were able to draw posthumously, he would have continued to edit and update his books because offending someone is the last thing he ever wanted to do.  Ted had a huge heart and the truth of the matter is that he cared more for children than some of their parents did.  For almost 100 years he’s been offering an entertaining and educational alternative to TV and screens.

Maybe the thing I’m struggling with is not whether or not you think some Seuss drawings are offensive.  Maybe my struggle is the implication that we need everyone to agree on everything and to never offend anyone else.  I wholeheartedly reject this idea.  We are a society who claims to celebrate diversity.  You can’t celebrate diversity when you’re actively trying to stamp out our differences.  What you really value is homogeneity.  Sameness.  How boring is that?

If you’re reading this, you probably don’t disagree.  I know I’m different from you and that’s one of the reasons I like you so much.  The people I’ve surrounded myself with in physical environment as well as in the digital realm are people who are different from me.  I find differences fascinating.  The last thing I want is for you to change to be like me.  Of course I love it when I find things between us that are similar.  I enjoy having things in common, just not everything.  I have friends in both worlds who are very different from me in religious, political, and social beliefs.  You know, the very things that break up families, friendships, and cause us to tap the “unfollow” button?  The way I see it, these differences make great friendships and discussions.  I’m not threatened by my vegetarian friends, my homosexual friends, nor my atheist friends.  I love them.  They’re so fun to talk with.  I learn from them.  I grow because of them.  Ted definitely drew some sketchy things.  I'm not asking you to like them, I'm asking you to see the whole person.  And maybe let your kids be exposed to some things that lets them know everyone in their life will not share their values or perspectives.  Maybe have a conversation about that.

As I said, I’m a bit of a Dr. Seuss fan.  I don’t remember having his books when I was a kid, but I almost certainly had a few.  I discovered (or rediscovered) Dr. Seuss in college back in the early 1990s.  My roommates and I would make a late night run to the 24 hour Walmart out of boredom, and I would grab Dr. Seuss books and hold a mini concert/reading to see how fast I could read them aloud.  I guess when you’re 19 and not fond of partying that passes as entertainment.  In grad school I realized the art and creativity of Dr. Seuss was an influence on my artwork and I threw myself into a rabbit hole of research of this most interesting human.  If you want to be upset about some artwork by ignoring the culture and time period in which it was created, there’s a lot more than just a few books to be upset about.  And if you’re so short-sighted that you are unable to consider the historical socio-political setting in which an artist worked, I think maybe that’s actually “cultural insensitivity”.

By the way, Seuss was Ted Geisel’s middle name.  It’s of German descent and it’s meant to be pronounced “Zoyce”.  Ted’s move to use this name for his children’s books was related to the idea that the Americanized pronunciation of “Seuss” rhymed with “Goose” as in “Mother Goose”.  He added the “Dr.” prefix because his father always said he wanted a doctor in the family.

If you still want to get rid of your Dr. Seuss books, I’ll send you my address.

Posted by e-sketchbook at 9:42 AM No comments: