Cooler temperatures have arrived and the kids are changing their minds about what they're going to be for Halloween almost daily.  That means it's time to go to Stewart Farms and get pumpkins. 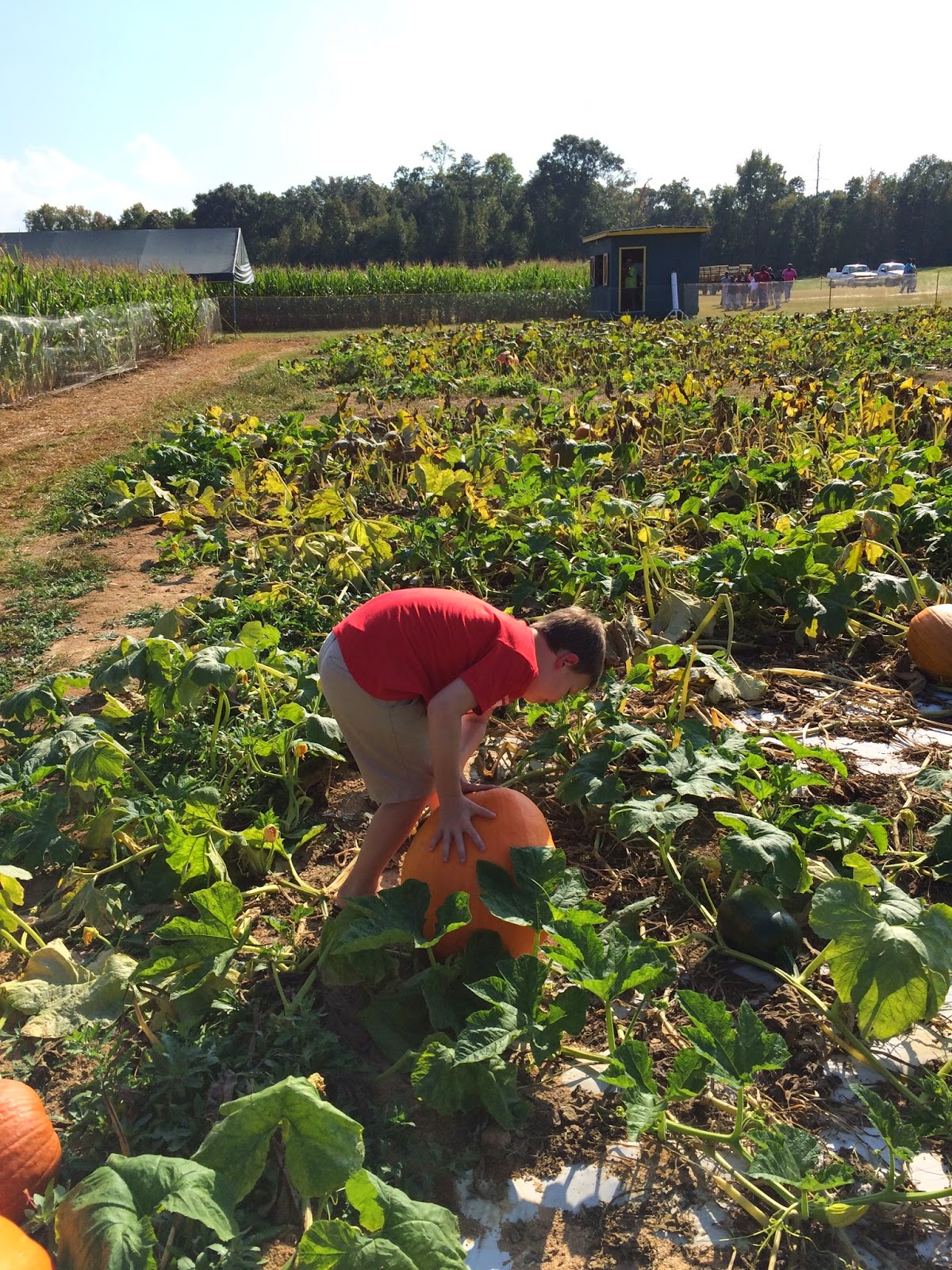 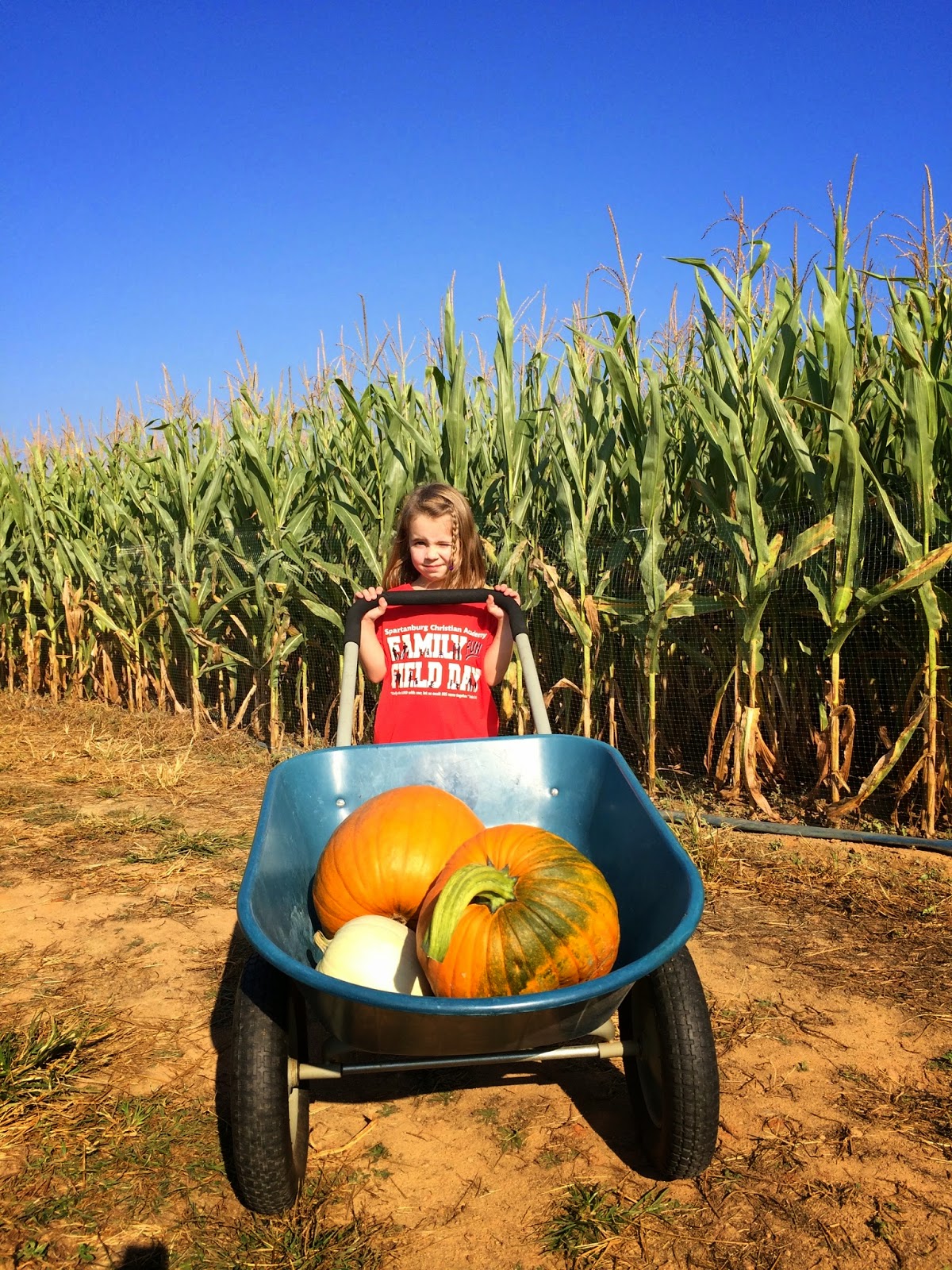 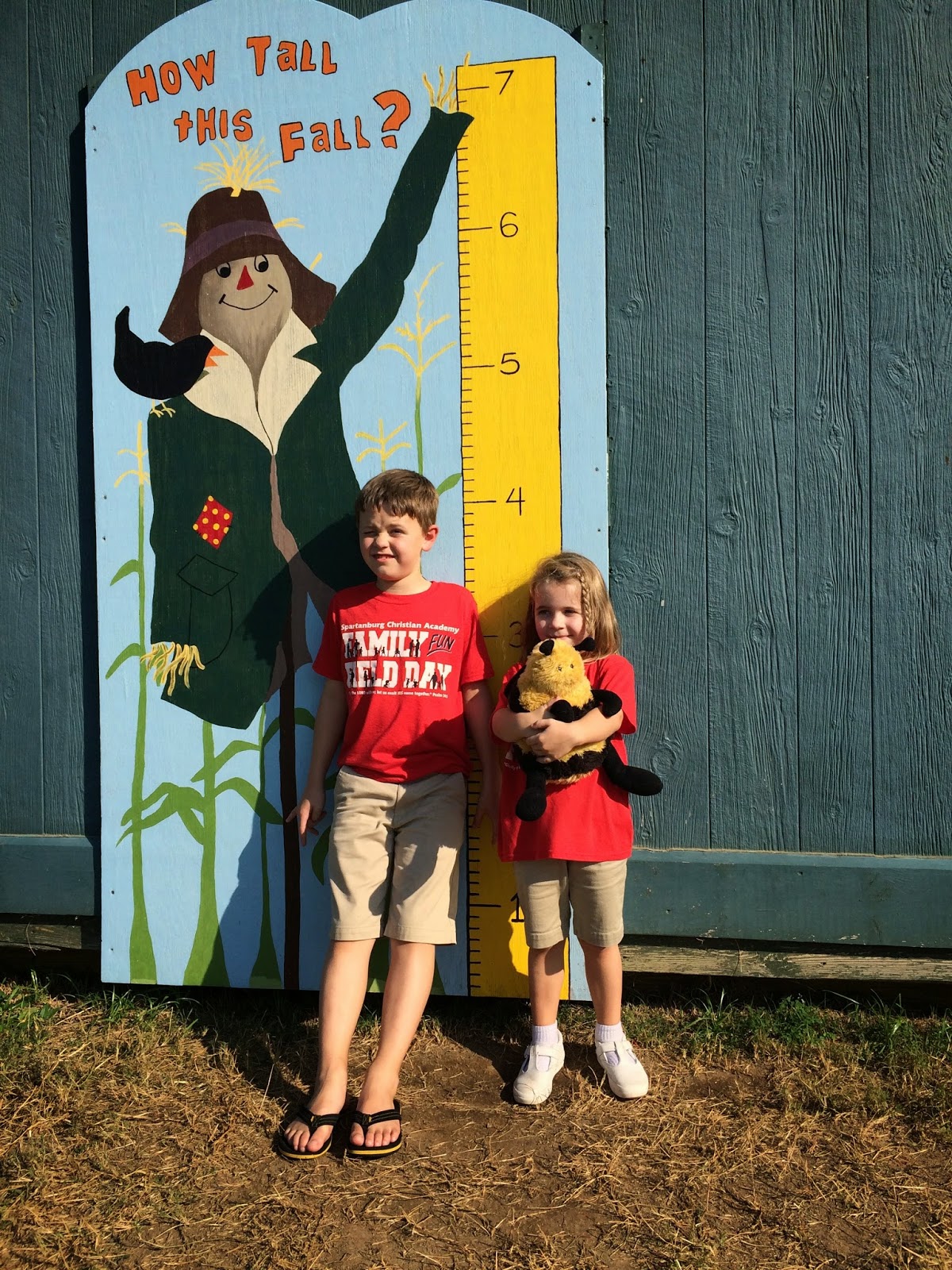 The kids have grown a bit since last year 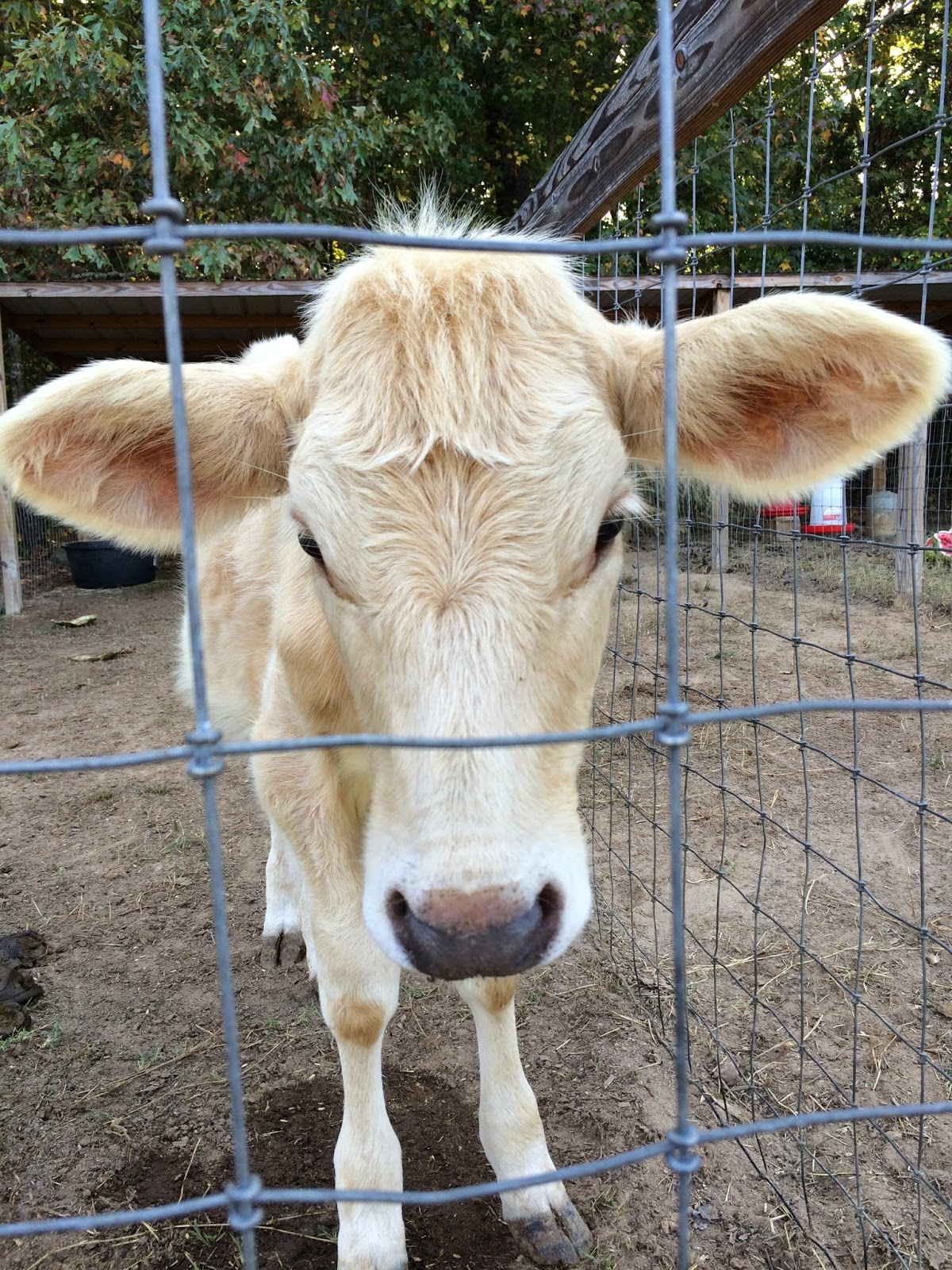 Our favorite animal this year was the cow.  We all got to pet him and Violet got several good licks to the face and arm. 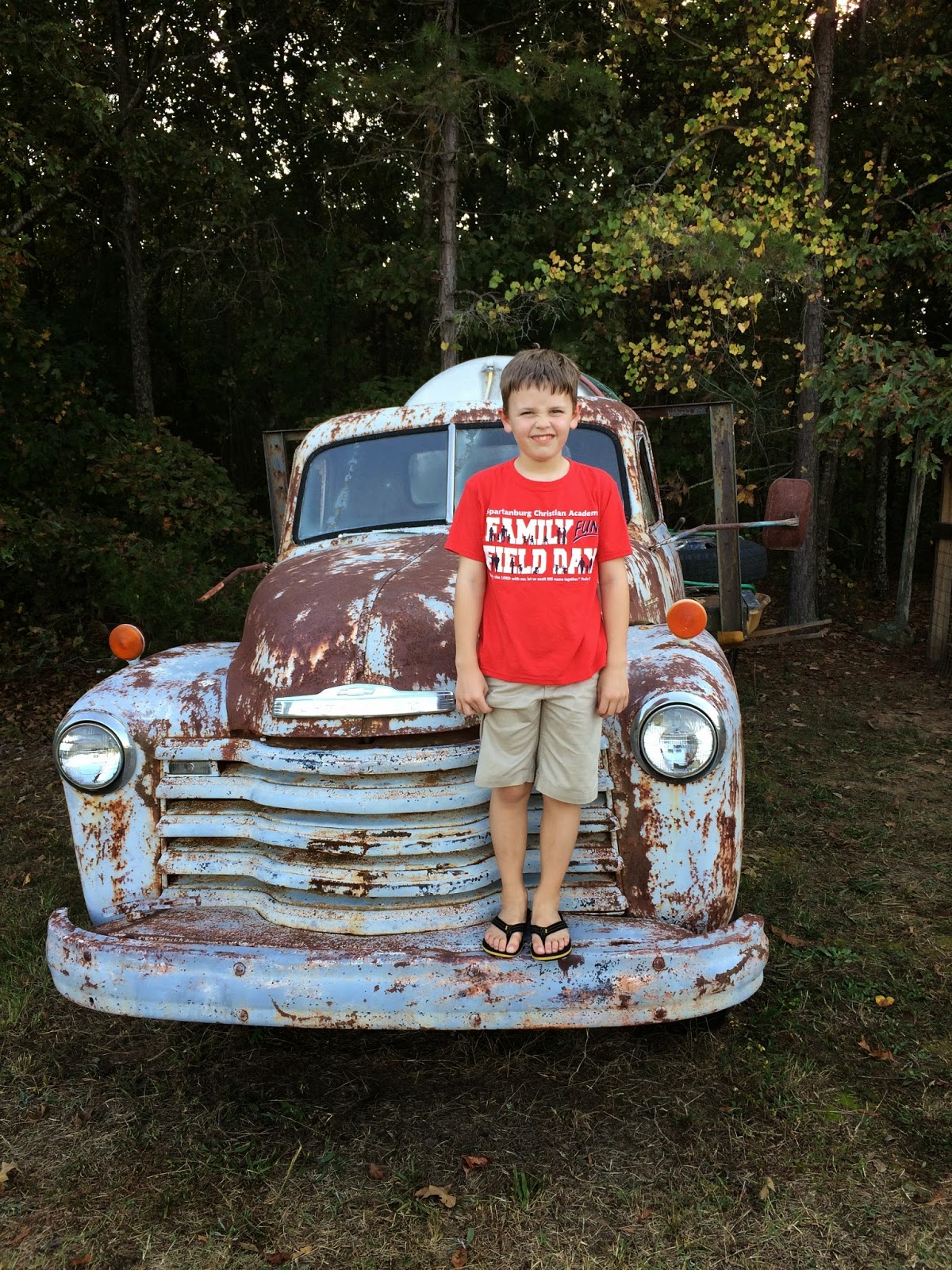 Violet and G took the wagon ride and Blue and I did the mini corn maze.  We took a wrong turn and ended up somewhere inside the big maze. 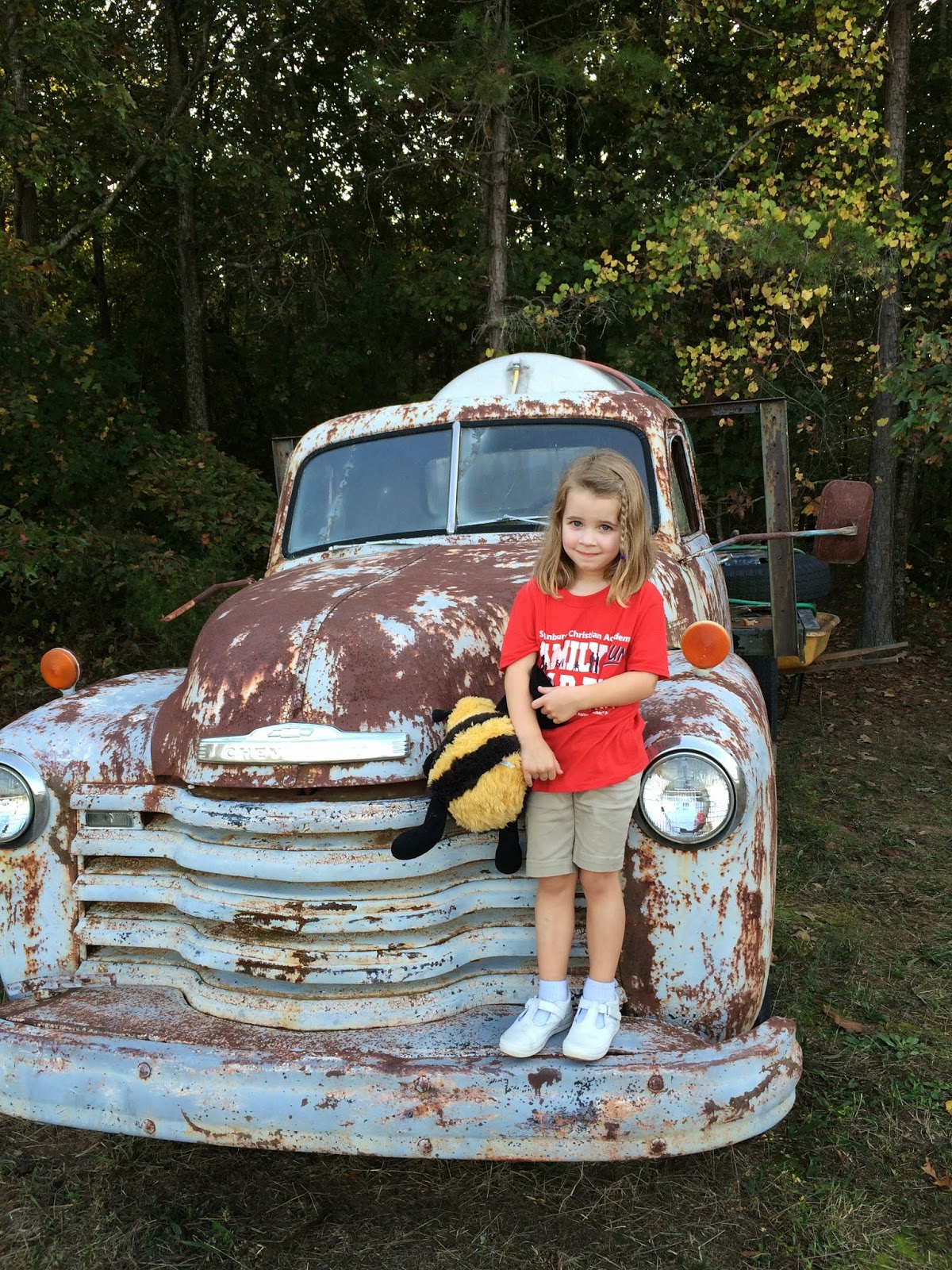 And after our pumpkins were chosen and the photos were made, we said goodbye to the farm until strawberry season.

Monday was the first day of Fall Break and it was particularly exciting for me.  I loaded up all the new sculptures I created over the summer and delivered them to the powder coating place and picked out their colors.  I'm really looking forward to getting those back and sharing them with people. 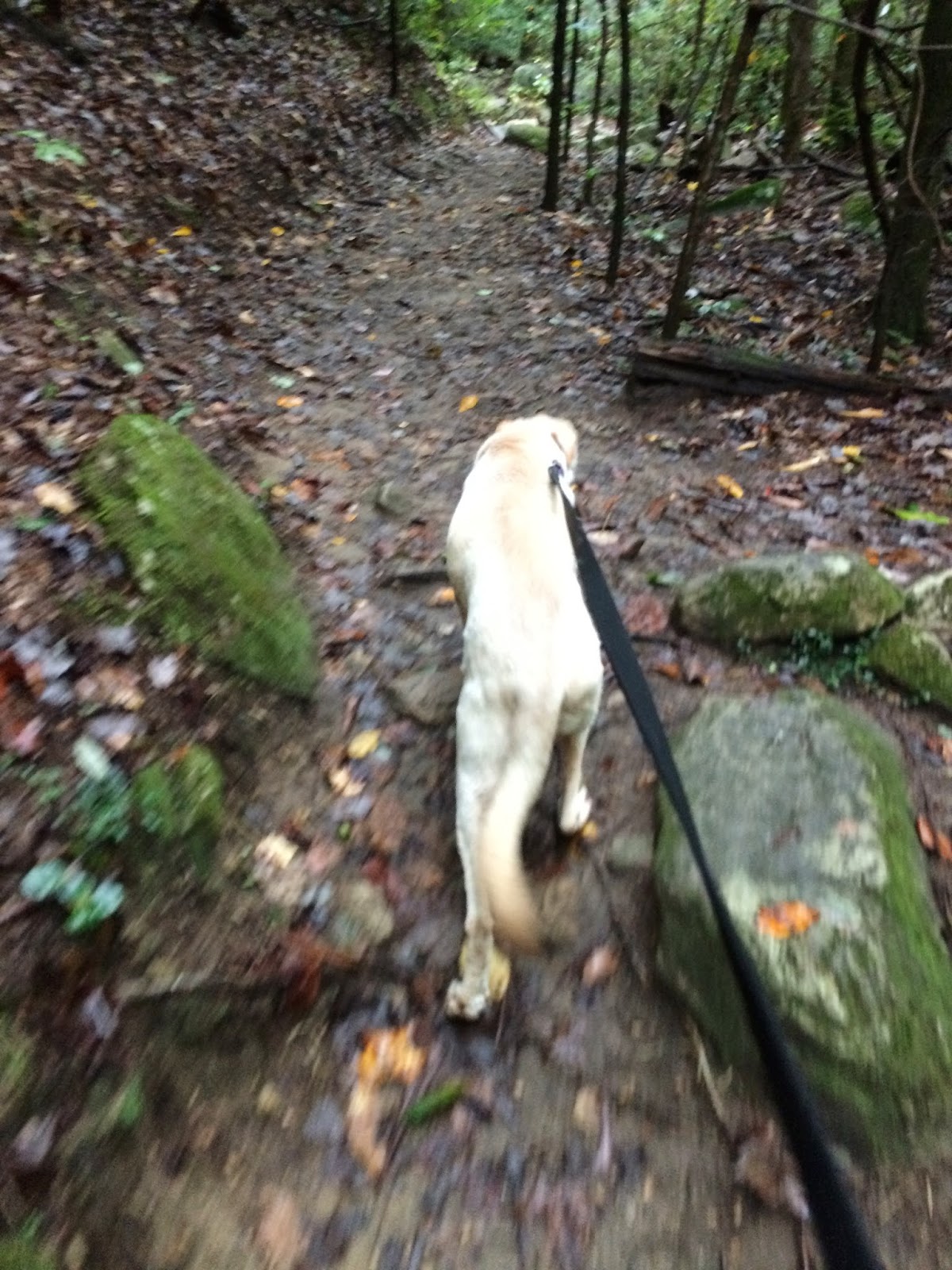 Tuesday I put Zeke in the truck and drove up to Jones Gap State Park for a hike. A coupe of years ago Blue and I tried out the Rainbow Falls trail on a whim.  The hike is about 2 1/2 miles and it ascends 1000 feet over that distance.  We climbed and climbed and the very young Blue complained and complained.  When he could go no more we turned around and started back.  He was young but he was too heavy to carry back down on my shoulders.  Last Tuesday I realized that where we turned around, we were about 10 mins from the end of the trail and this beautiful waterfall. 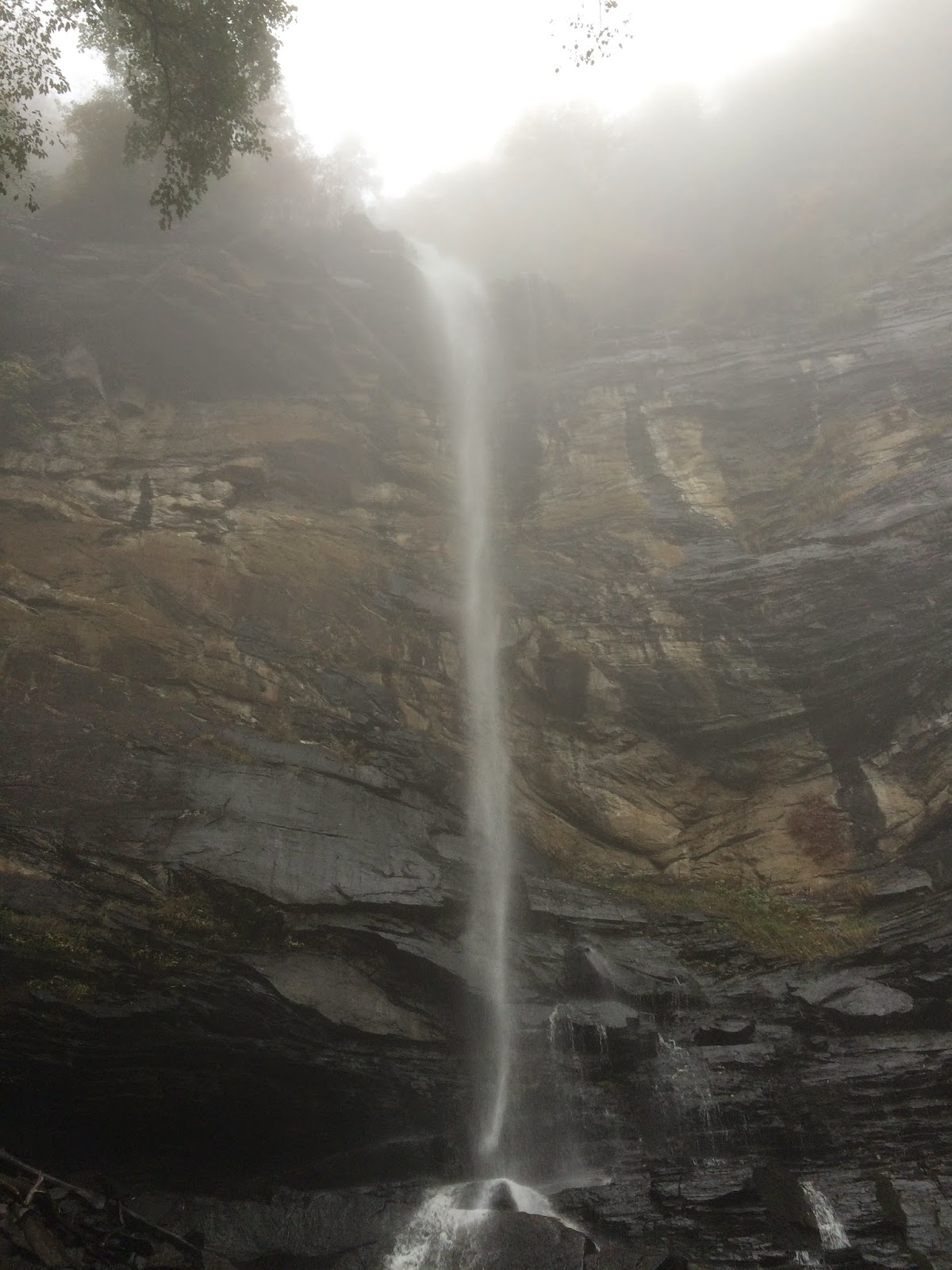 Everything is so vertical here pictures just cant show it to you.  You have to be in the space and tilt your head all the way back and hear the rushing water and feel the mist on your skin. 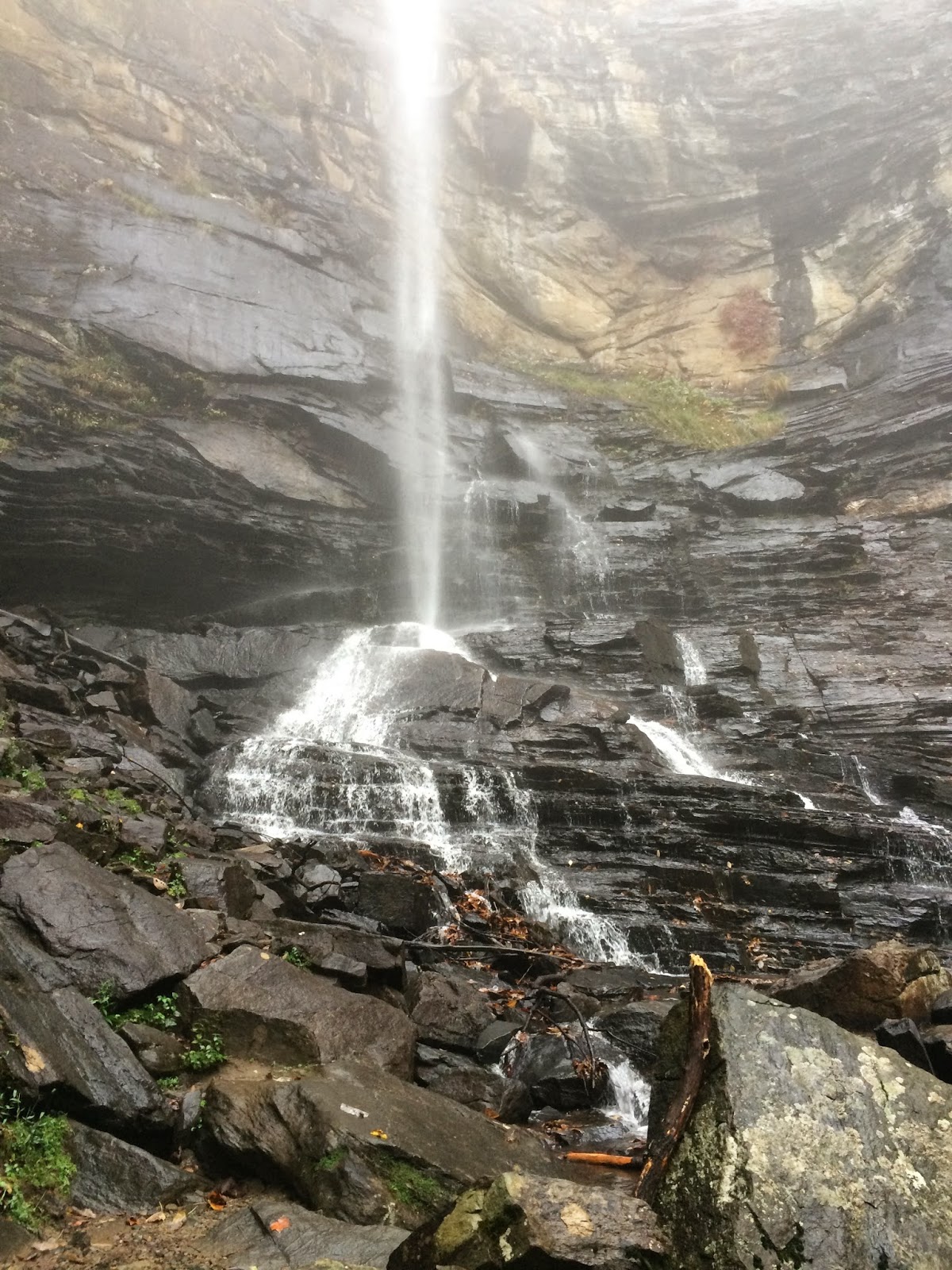 Zeke helped pull me up the entire trail and he would have tried to scale the sheer rock face if I had told him to. 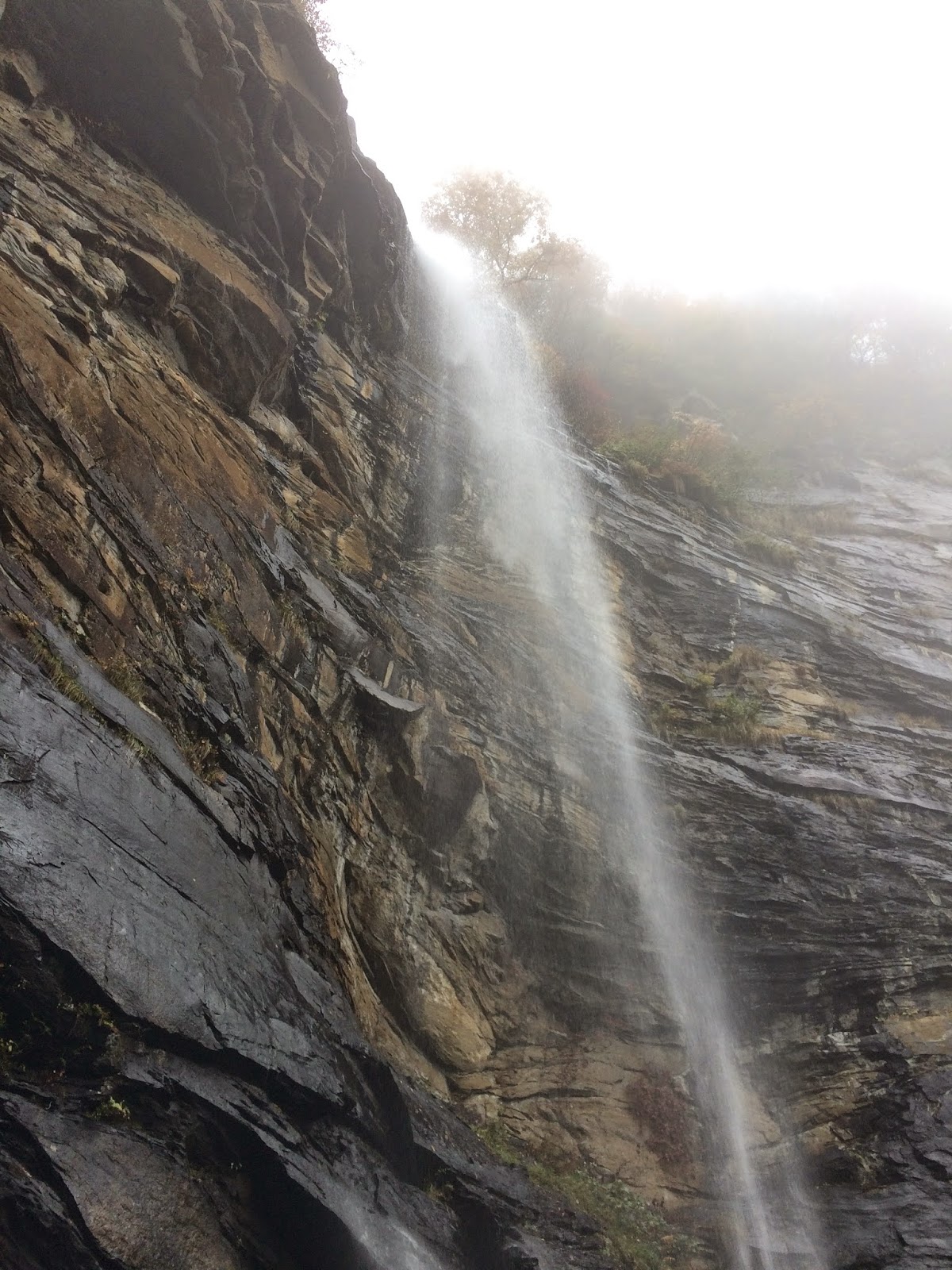 We climbed up close to see how the water fell out from the rock face. 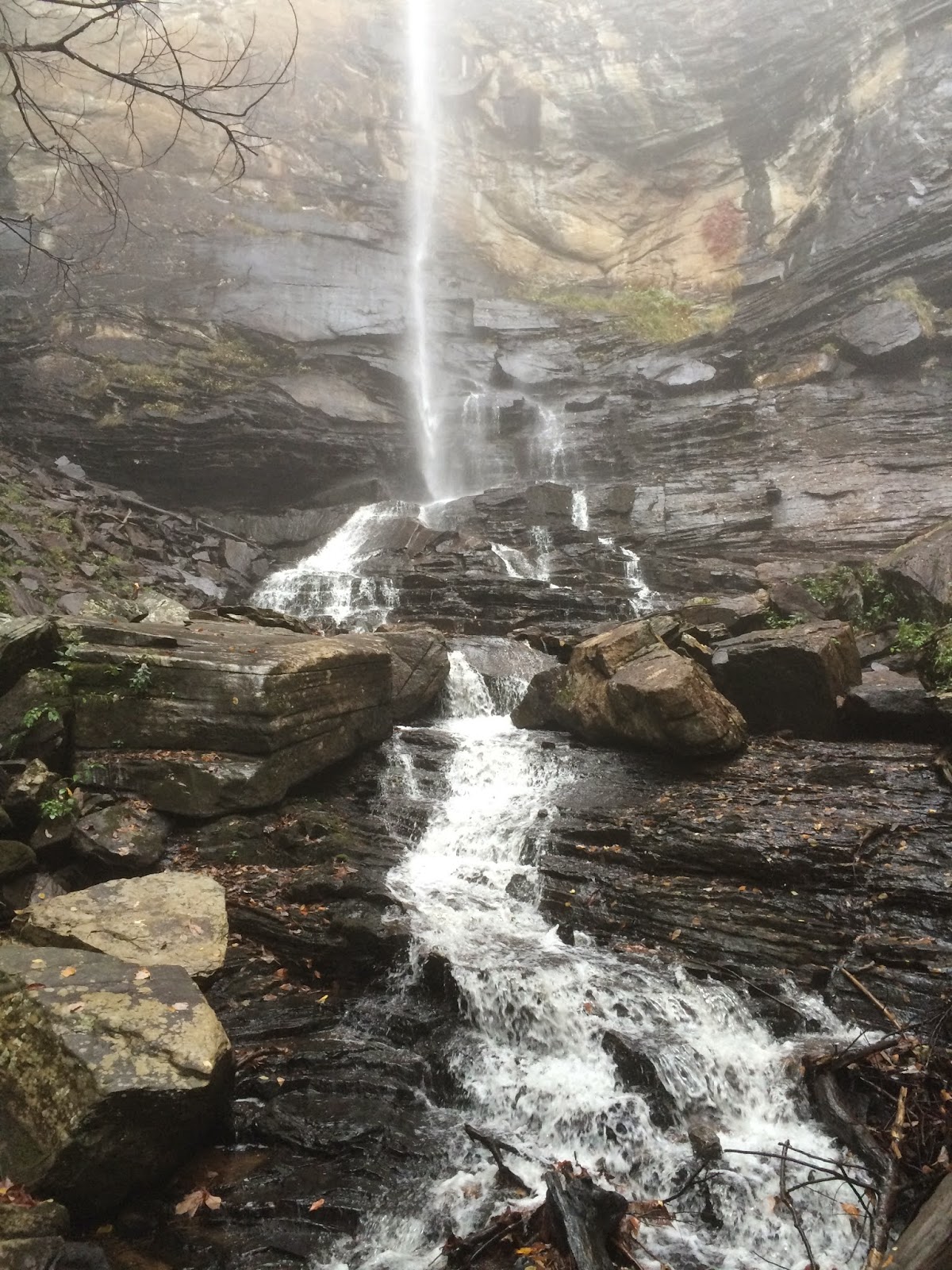 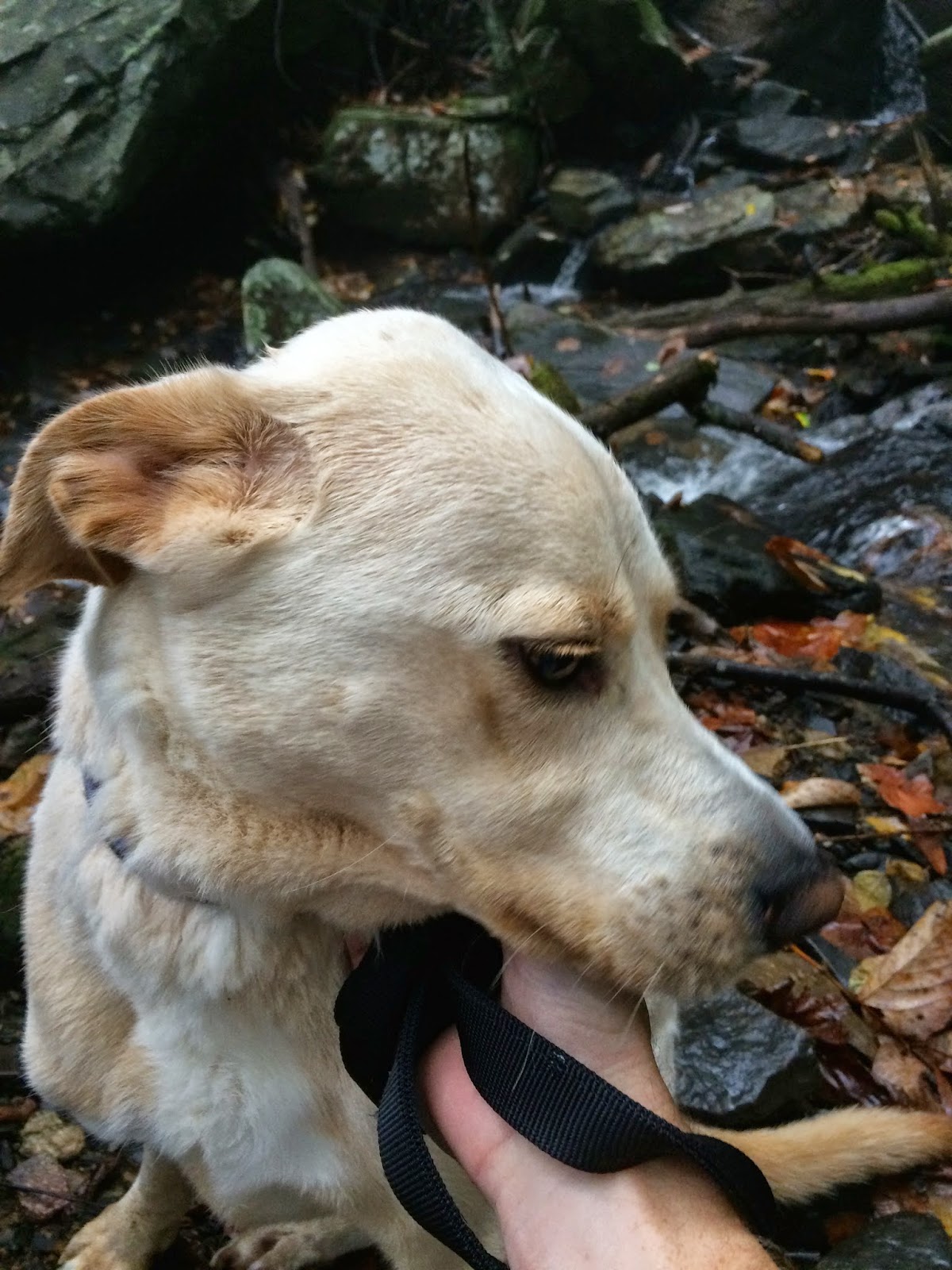 And after a short rest, we started back down the hill. 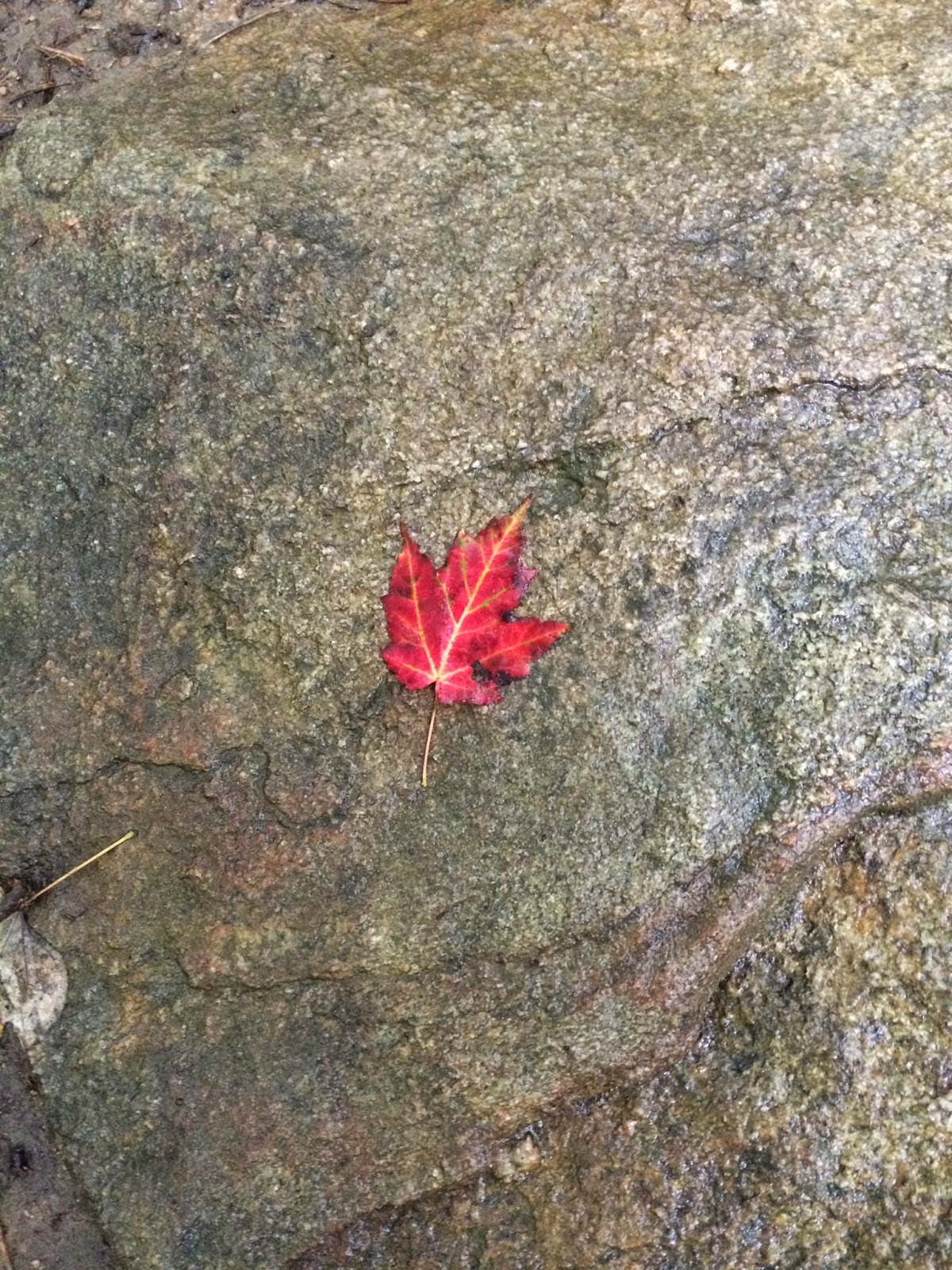 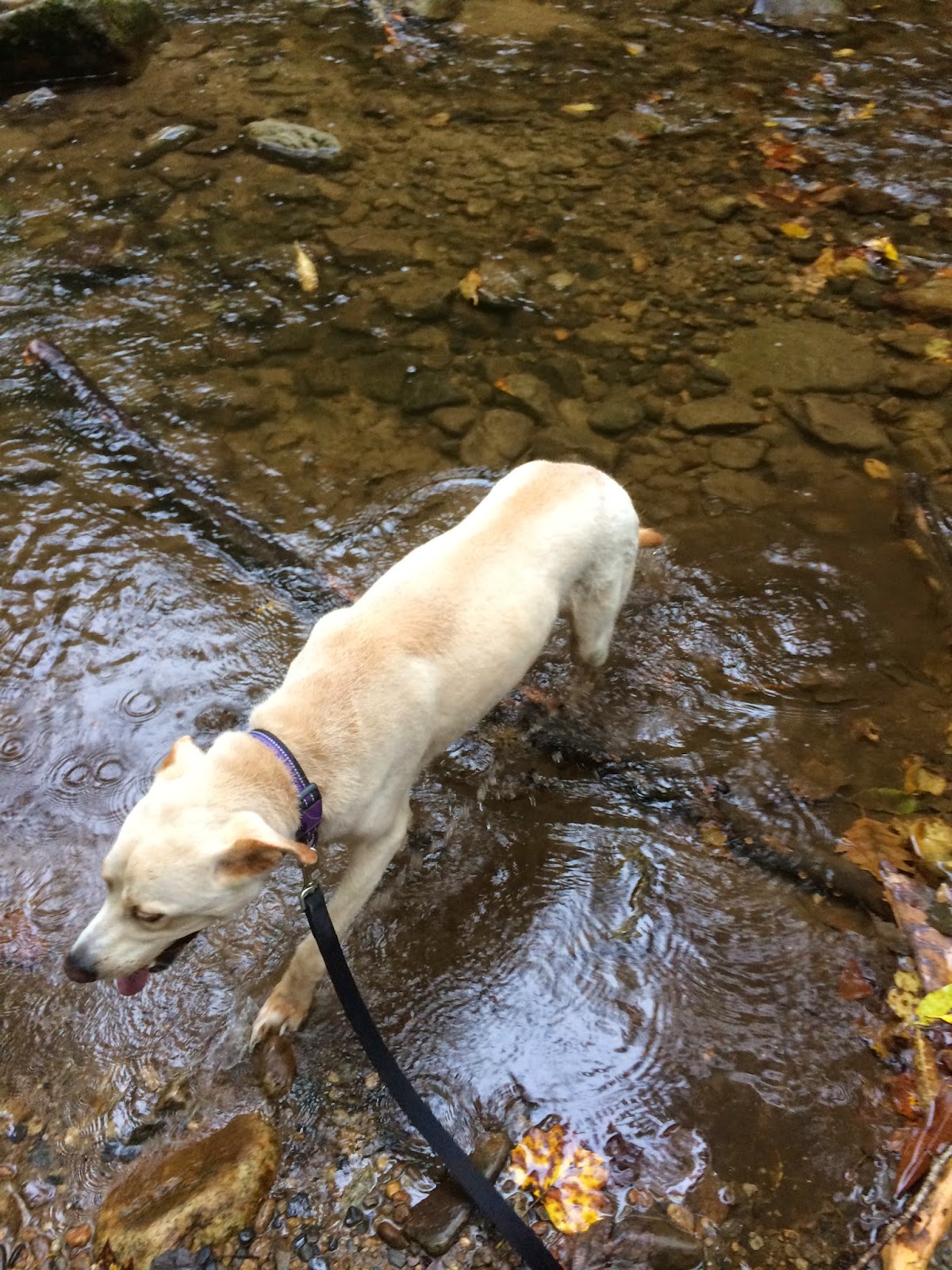 Zeke did great though he did get off to a shaky start.  Like me, he's not the biggest fan of people.  There were a couple of groups of school kids taking in some nature walks.  As we approached the first loud and energetic group in order to pass them on the trail, Zeke freaked out and decided he'd rather go back to the truck.  He slipped his collar over his head and galloped back down the trail.  After a few yards he left the trail and found a nice bed of poison ivy to nestle down in.  We got hitched back up and then headed over to the river to rinse all the potential itchy stuff off our legs.  Then we headed back to the trail and successfully passed the noisy kids and continued on our great hike.

He did great the rest of the day and since I didn't get poison ivy, I decided to forgive him. 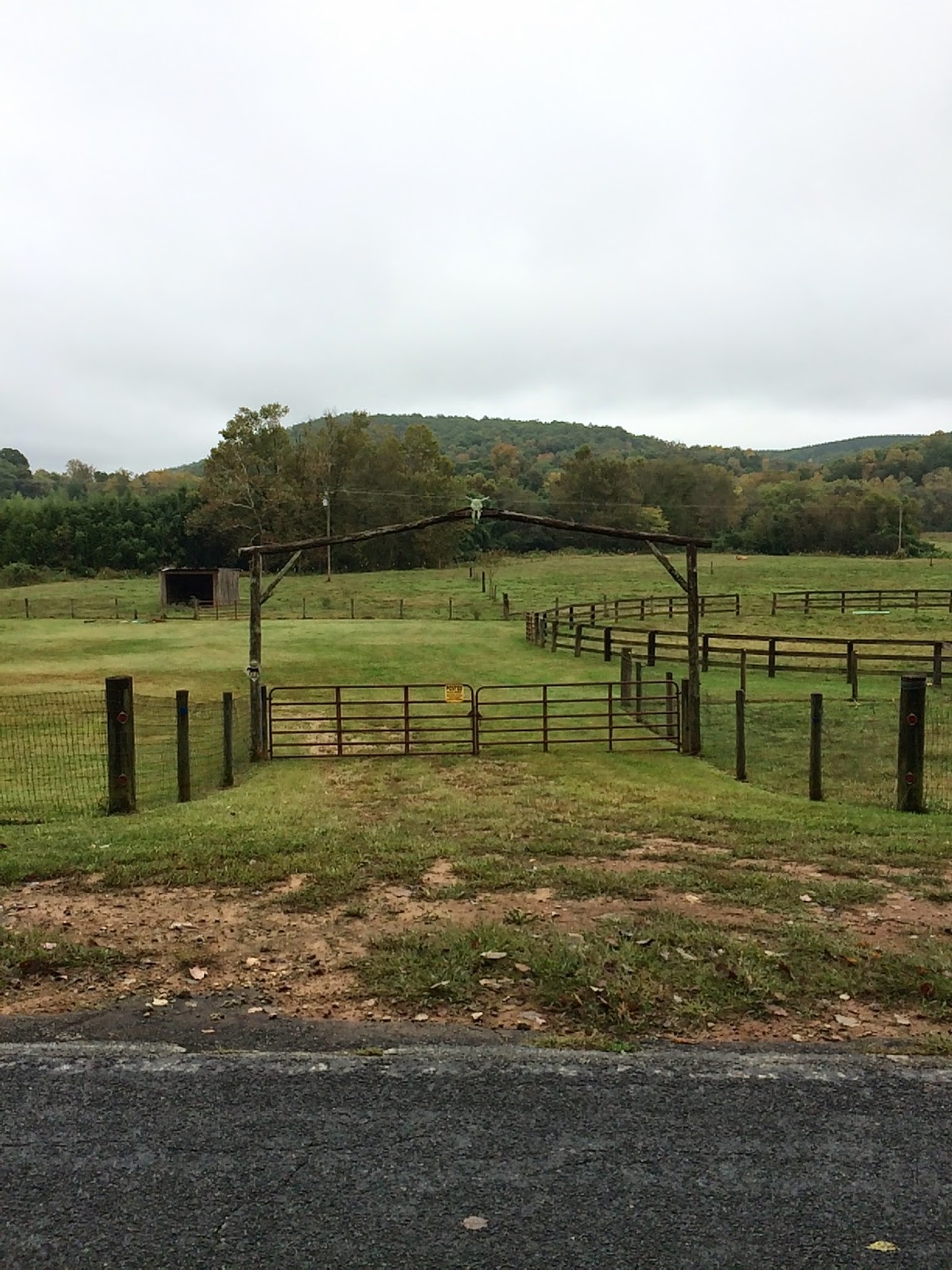 Posted by e-sketchbook at 6:52 PM No comments:

The school is doing some construction outside the sculpture area causing the regular pedestrian patterns to be obstructed.  Some of us have changed our paths at least a little but others are more stubborn.  This morning the heavy equipment moved even closer to us and started taking down trees at the edge of the busiest sidewalk.  As the backhoe downed the trees and the Bobcat grabbed the pieces and dragged them away, we watched out our window as students continued using the sidewalk.  Several students had their faces buried deep in their cell phones and did not even look up to notice the dangerous and interesting events happening beside them.  One nice lady did not look up from her phone as she stepped over limbs and as the Bobcat sat and waited on her to pass.

Y’all, these phones are killing us.

I guess if we get flattened by a backhoe because we’re taking a selfie justice has been served.  We all know what a tempting danger our phones pose as we are driving.  But I’m not sure we consider what our phones are doing to us on a more subtle level.

I got an iphone 3g about 6 years ago.  I loved it immediately.  I never talk on the phone, so the ability to call someone was not important to me.  I didn’t text and I was never a member of the Facebook cult.  But this constant connection to the internet was so convenient.  I could read and send email anytime from anywhere.  If I needed an image to draw or to show a student for reference, it was there in seconds.  And then there was the camera.  I never knew how much I needed to have a camera at my fingertips during every waking hour.  I’ve upgraded a couple of times and I’ve added Instagram and Twitter to my life.  Both of these things add a constant feed of photos and information that demands to be scrolled through everyday.  I’ve decided that both applications can be useful both personally and professionally but both also take up large amounts of time.  Even still, I wasn’t one of those people with “a problem”.

I learned the importance of regularly drawing in my sketchbook in grad school.  Since then, I’ve kept a sketchbook in the rotation and worked my way through many of them and it’s been hugely beneficial to my work.  About a year ago I picked up my sketchbook to go to a meeting and when I opened it up I saw that the last time I drew something in it was the last meeting I had been to about a month earlier.  I chalked it up to being busy and moved on.  When the semester ended I told myself I’d have more time for sketching with a few weeks off from school.  When classes began again in January I think I’d filled two pages…and this is not a large sketchbook.

While I still did not have “a problem”, I was ready to admit that I had neglected my sketching time.  For Lent I set out to deliberately sketch everyday.  I wont make you scroll back in time to see how that went – I failed.  By Easter I could admit where my sketching time was going.  The phone and it’s constant flow of information was slowing taking over my life.  Yes friends, I was a phoneaholic.

Comparably, my students made me look like a beginner at wasting time on the phone.  They can pull out their phones to look up an image and within seconds they’ve texted two people, checked email, updated Facebook, posted a picture of themselves holding a power tool on Instagram and uploaded a video of me to Snapchat.  (In their defense, I do some really goofy things sometimes.)

As the spring semester ended I made a conscious effort to keep the phone in my hand less.  I drew more and had a very productive summer.  The temptation is still there and if I’m not very careful I’ll find myself zombied out scrolling through a feed of images while all around me my kids are growing, leaves are changing and time is passing.

I’m not alone.  A while back Justin Zoradi wrote an article on Donald Miller’s “Storyline” blog in which he argues for what he calls “Mobile Mindfulness” or “the art of deliberately tempering your relationship with technology”.  Justin ends his article with this line: “Use technology.  Milk it for all it’s worth.  Then learn to put it down, cultivate real human relationships, and get to work.”

Of course I’m all for people getting to work but those human relationships are the things that are really important.  We grab our phones in a waiting room so people wont talk to us.  We “talk” to each other through cold text messages, tweets and comments on social media.  We have “friends” or “followers” that we’ve never looked in the eye.  All this while we walk past hundreds of people each day, never looking up from our phones to smile or say hello.

I guess a hermit is not exactly the poster child for more human interaction, but if even I can see there’s a problem, there’s really a problem.  You do what you want, but I’m going to put my phone in my pocket and watch phoneaholics run blindly into things.
Posted by e-sketchbook at 6:59 PM 1 comment: