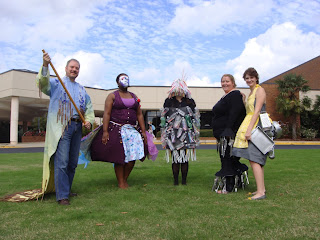 Posted by e-sketchbook at 7:51 PM No comments: work begins on "the peg-leg project" 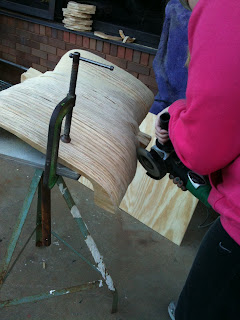 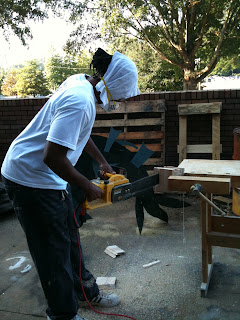 the chainsaw was a big hit. so was corey's dreadlock protective covering. 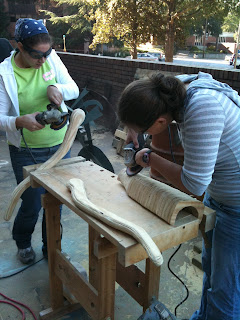 Over the first several weeks of the semester I watched at least 3 students as they held a power tool for the first time. They literally trembled as they prepared to pull the trigger. One student did her best to avoid using the chainsaw. When she finally gathered her strength and used it to carve on her project she loved it so much she asked her parents to buy her one. Probably not what you'd expect to hear from your college aged daughter.
I maintain that we have more fun in Sculpture than in any other area. I mean, come on.......we have chainsaws.
Posted by e-sketchbook at 7:25 PM No comments: 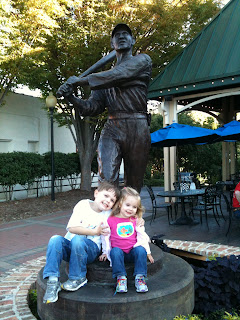 A photo with Shoeless Joe. Because it's never too early to start warning your kids about the dangers of hanging with the wrong crowd.
The last two days of Fall Break ended up with time spent at Fall for Greenville. The kids are all about some festivals these days and Greenville is always nice. There were rides.... 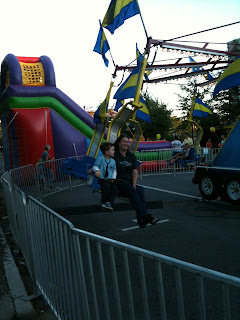 ...and shameless ads aimed at children.... 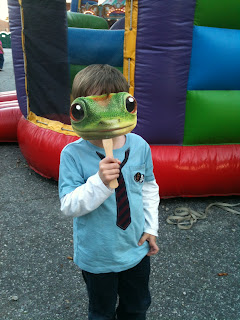 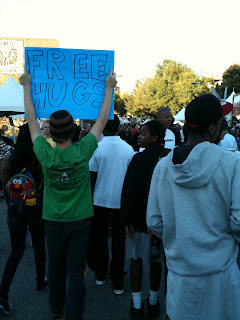 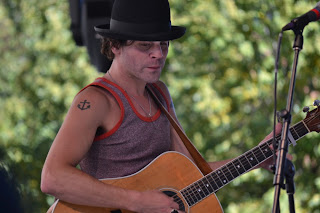 Fall for Greenville is all about food and music. The food is cheap and the music is free. We met some friends at the stage for Langhorne's show and we walked up and seized a spot right in front of the stage. Ever the caring parents, we had our 5 year old and 2 year old in tow. Before you get uptight about that, just know that the music was not too loud and as a daytime all ages show, the language was pleasantly PG at the worst. And what kind of parents would we be if we let our kids grow up thinking that the radio was the only source of music, that that Bieber kid was worth hearing, or heaven forbid.....that they NOT know what the word Americana means?
So we sat down on East Washington street, right on the center line and waited for the band to tune up. I'm a realist (most days) so I understood that the only way our kids were going to sit still and relatively quiet for an hour or so was with some technology help. At the first sign of fidgeting I handed Blue my phone and he went to town on some Angry Birds. When the show started everyone was on their feet.....everyone except Blue. He sat in the street with crazy fans jumping all around him for the entire concert. He didn't look up but he did catch the beat a few times and start swaying to the music.
For the final tune Langhorne launched into a particular song he's known for singing while moving through the crowd. At the Handlebar last year he sat down with a fan in the seats near us and sang to her. At the Visulite a month or so ago he jumped off stage and walked right up between G and me. Sunday he climbed down off the stage, jumped the metal barrier and walked right over to where we were standing. He was singing away when he spotted Blue sitting on the ground playing games on the phone. Langhorne smiled and quickly sat down in front of Blue and began to sing directly to him. Blue was so into the games I had to tap him to get him to look up. He saw what was happening and this huge smile washed over his face. Then Langhorne got up and continued his stroll through the crowd. Since Blue had my phone I couldn't get a photo of the experience. But as a wise man once said, "We have it in our hearts". 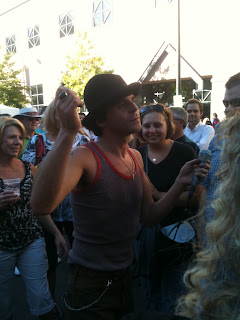 This was just after he left Blue's perch. That's Ginger's hair on the left. I took the photo and Blue asked for the phone again so he could finish his game. He's a tough crowd.
Posted by e-sketchbook at 6:35 PM No comments: 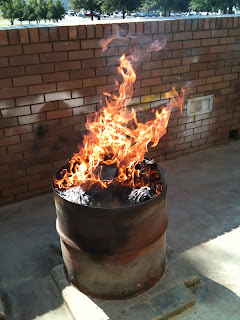 There are 63 ceramic sculptures inside this fire.
My students spent a couple of weeks developing ideas and creating fragile projects and when they were finished I put them in a barrel and set them on fire.
Typing that out helps me see just how odd it may seem to you. It also explains why some students were so nervous about the idea. It's easy to get so caught up in your own little world that you forget just how odd some of your routine experiences may seem to others.
All the projects survived and the results were great.
Posted by e-sketchbook at 6:21 PM No comments: 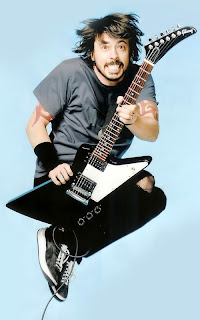 After the BBQ festival last week we drove out to Walhalla, SC for my friend's gallery opening. Stan DuBose is an elementary school teacher, an excellent ceramic artist and he was one of my college roommates. He built a cool house a few years ago up on a hill and had this really great studio with a view. Last spring he married an artist and they soon found out that the cool studio was only big enough for one artist.
The solution? Build a whole new building to house two perfect studios joined in the middle by a gallery for display. And throw in a bedroom, a bathroom and a kitchen while you're at it.
They call it End of the Road Studios and I don't even want to waste your time by trying to explain it in words. When we go back I'll take photos. To get the idea of antique doors for a ceiling, license plates for siding, a horse trough for a bath tub or pennies for kitchen floor tiles....you really just have to see it. It's really great and if you're interested in seeing it and perhaps buying some art at the same time, you can make an appointment or find out the next open studio time by emailing: artist@endoftheroadstudios.com
There's going to be a website but it doesn't seem to be working at the moment.
While we were there getting the tour I was watching people and apparently some of the people were watching me. I was wearing a Nirvana t-shirt because I have no fashion sense and because I tend to feel that t-shirts can be appropriate for just about any occasion. A very small, very white-haired lady ambled over to me and told me she liked my shirt. That's right, a lady pushing 70 was envying the Nirvana shirt. This particular shirt shows a concert poster for a Sacramento show back when I was in college. The lady asks if I'm from Sacramento. I say no. She says that she thought that I might have known "Dave". She's talking about Dave Grohl the drummer for Nirvana. I stood silent not really being able to process why she thought I would have personally known a famous guy. After a brief pause she continued...."Well you know, before we moved here we lived in Alexandria, VA and Dave used to live next door to us. Oh, he was such a nice guy! What a charming neighbor! We're so proud of him."
These are the kinds of things that happen in Walhalla, the garden of the gods.
Robin Cooper and Stan DuBose. Look them up.
Posted by e-sketchbook at 7:18 PM 1 comment: 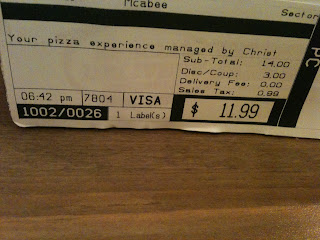 I guess that explains why this pizza was so good.
Posted by e-sketchbook at 5:12 PM No comments: 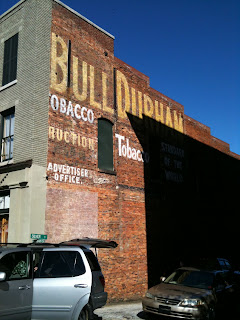 Squealin' On The Square is something we've looked forward to since moving here. It's a BBQ competition and festival and it's a pretty big deal. There were vendors and people giving away nice free things... 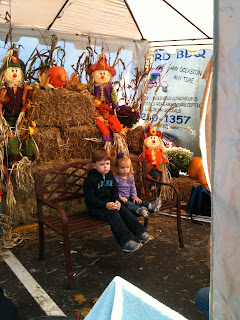 ...like free autumn photos where your kids act like they are having teeth pulled. They laugh and cackle until you make them sit down and someone pulls out a camera. Then they slouch and sulk. 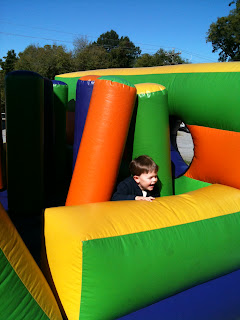 And then they laugh and cackle again. Blue loved the obstacle course. 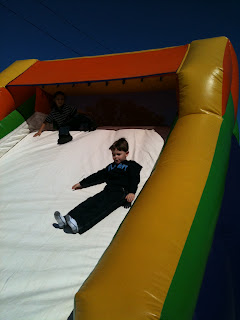 He also enjoyed the ice cream... 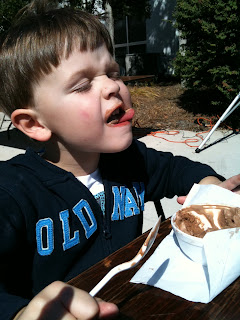 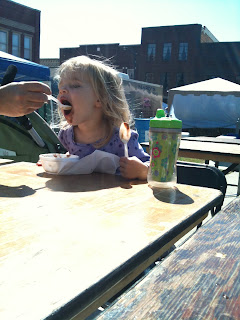 I stayed veggie-free with the pulled pork. BBQ is one of our staple foods. BBQ restaurants are called "Pig Places" by Blue and Violet. I'm not looking forward to the conversation we'll have after Blue asks about the connection between cute pigs and BBQ.
Posted by e-sketchbook at 6:18 PM No comments: 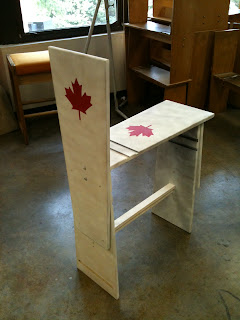 Jermel is 6' 6" and most of that seems to be made up of legs. He is one of our art majors and he is a star on the basketball team. Those legs are the right proportion for sprinting back and forth on the court but they make sitting on the drawing benches for 3 hours rather uncomfortable. On the regular size benches he looked like an adult riding a toy tricycle.
Ever wonder what individualized instruction really looks like? Sometimes it looks like this. I took some time last week and hooked him up with a sweet Jermel-sized bench splashed with a bit of his Toronto hometown. 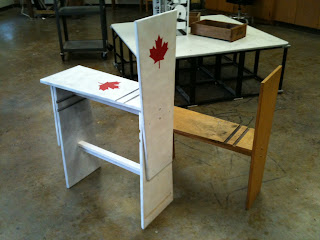 A photo of the Canadian ride along with a regular sized bench for comparison. When I tried it out my feet were a good six inches above the floor. 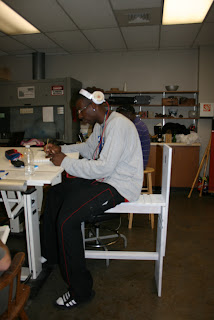 This is Jermel with his ever-present headphones enjoying his personalized seat. This is not the intended use for the bench, but it was so tall he was able to substitute it for a high stool to work on a tabletop.
Why choose a small liberal arts university? Because the professors will not only know you by name, they may also choose to modify the classroom furniture to suit your needs.
Posted by e-sketchbook at 7:40 PM 3 comments: