For reasons beyond my understanding at this time, music has been mostly absent from my daily life since the start of the semester. The long drives have been dominated by podcasts or just the silence of decompression. My guitar and amp have nodded off in the corner of my office and even when I've had moments when I wanted to listen to music I've had a tough time finding something that fit my mood.

And yet....all semester I've been looking forward to seeing Langhorne Slim at the Handlebar in Greenville. 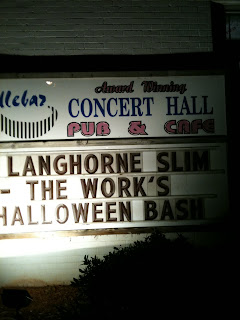 Part of the anticipation had to do with this being a social event. You probably know that I do not really socialize in the "social" sense of that word. Rarely do I set out to actually meet up with specific people with the intentions of engaging them in conversations about profound and silly things.

I'm not saying a concert is a social event. Far from it. Just because I'm standing beside you in a room while you attempt to jump up and down in place while balancing your beer, singing off key, and making a bootleg video on your little computer phone does not mean you and I are socializing.

(Which brings up a detached side note: I'm not sure why it's considered appropriate for people to go to a concert to hear a professional singer and then have the average concert-goer decide to try their hand at singing all the songs right there on the spot. I've never gone to one of my sculpture exhibits and had some random guy named Earl wheel in a MIG welder and take up steel sculpting on the gallery floor. Wouldn't that be awkward?) 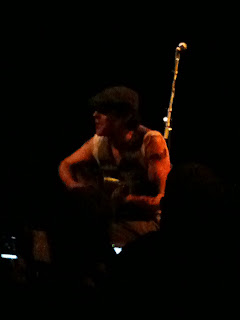 Anyway, this concert was a fully sanctioned Hooligans event. Jolly, Mosh, Sandy, Ginger, G & I all made plans to converge on Greenville at the same time. Actually I think we converged on Greer first making a stop at a nice little Tex Mex restaurant downtown....that I've totally forgotten the name of right now. Our waitress was dressed up as a crazy cat lady and we saw a Ghostbuster, a couple of pirates, and several people we thought were dressed up until we realized that was just how they dressed all the time.

After the good food and some catching up we made it to the Handlebar to find the crowd really thin. The opening act was already playing and there was only a scattering of people in the building. The delay between the opener and the grand entrance of Langhorne was minimal. And when I say "grand entrance" what you should picture in your head is a reasonably small framed guy quietly walking out on to the stage, picking up a guitar and sitting down on a monitor and whispering a stunningly pleasant tune. 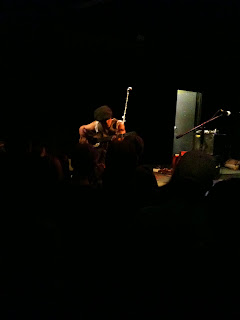 The first time I saw Langhorne Slim was there at the Handlebar about 4 years ago. Back then he was the opening act for the Avett Brothers and he had a similar feel to his stage personality. He wasn't flashy except for his ironic white suit - a simple nod to the fact that while he was an average guy, he was also working a job that carried some level of glitzy expectation.
Last night he started out playing that same old beat up guitar he had 4 years ago. Well, it was the same old guitar except for one new addition......a classy little silver glitter pick guard. A tiny speck of glitz on a heavily worn workhorse. 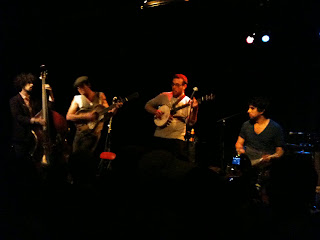 The band joined him for several acoustic songs as the small crowd more or less gathered around the musicians. The Hooligans had staked out a front and center spot about 10 feet from the stage but it felt more like we were standing in some one's living room listening to some guys play music.
Even after everyone plugged in their instruments and started using the microphones the show felt quite informal and almost conversational. 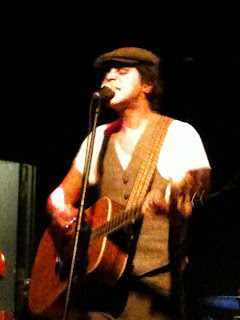 It was louder than any living room I've been in though. The stand up bass and the bass drum were loud enough that their vibrations rattled the high-hat significantly. And while these photos give you the impression that this is just a little folk band you should know that these guys know how to thrash with the best.
The energy, integrity and movement amplified by these guys can not be properly explained with words alone. You actually need to see the completely sober and normally rational thinking middle aged listener break into some sort of awkward dance to understand. 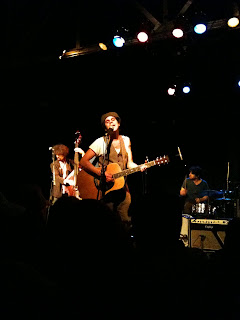 At one point Langhorne calmly walked down into the crowd with the microphone in mid song and sat in an empty seat in order to sing the rest of that song to the person beside him. When he walked back up on stage a few fans politely handed him back his cap and his microphone.
Near the end of the encore he shook off his guitar and grabbed several ladies from the audience and helped them up on stage to back him up on vocals. Our very own SandySingletary was THIS close to being pulled on stage. It was almost amazing. 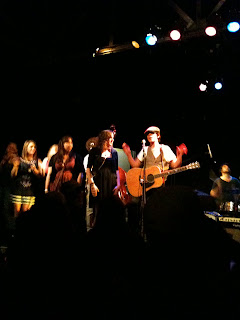 When we saw him there 4 years ago I remember seeing him finish his opening set and just walk off the stage into the crowd so he could see the Avetts just like everyone else. It may seem like an odd detail to recall but he was wearing a white suit so cut me some slack. Not long after that Ginger went to one of his shows in San Francisco and accidentally had a conversation with him at the bar before the concert began. Last night we saw him a couple of times while the opening act was playing and then after the show he came out and chit chatted with people as they left. Walking out I found myself shoulder to shoulder with him and I couldn't resist the opportunity to speak and shake his hand. My wife thinks I'm an idiot but it's nice to let people know you appreciate what they do.
And this morning I rolled the old iPod over from "podcasts" to "music" and I enjoyed some vintage Langhorne Slim....or "Sean" as his friends call him.
Posted by e-sketchbook at 7:22 PM No comments: 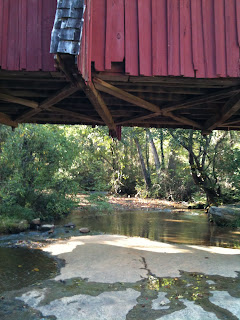 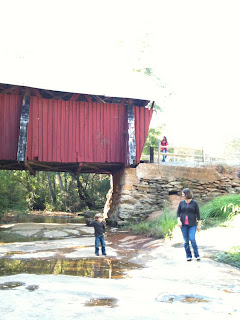 We had some photos made at this bridge which might be the only covered bridge left in SC. Blue and Violet were defiant and both seemed to resent the idea of being told when they should smile.
Speaking of smiling....
I picked up the new David Sedaris book of short stories this week and was surprised to see that not only was the entire book about animals, it was also illustrated. I read the name of the illustrator on the cover and it almost rang a bell but my synapses didn't quite make a connection. Each story had an illustration and as the chapters went on the drawings looked more and more familiar. I read the illustrator's name again and finally resorted to searching it online to see why his drawings nagged my mind.
Turns out the same guy who drew this: 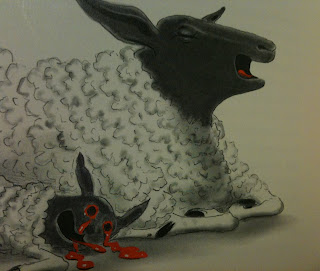 Also created and drew this: 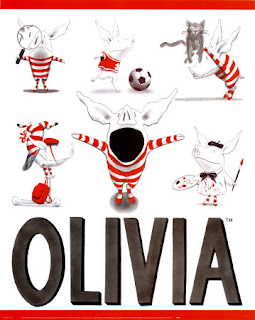 That's right. Baby sheep's eyes freshly plucked out by a crafty crow AND Olivia the cute piglet featured in the series of books and animated shows on the kid channel all came from the mind of Ian Falconer.

It would be impressive to say that I recognized his work from his early career stage sets or from some other fine art visual display. But no....I recognized his style because our kids watch Nick Jr. or Noggin or whatever they're calling the kid channel these days. That little Olivia series of books and shows operates with a minimal format. The characters are drawn in black and white with little shots of red for emphasis. The same minimalism and color use are found in the Sedaris book.

The illustrations and the stories work together very well as both deal with juxtaposition of ideas. The drawings are of cute animals interacting with one another in social situations and the red accent often draws attention to some negative or menacing aspect. In the same way, the stories begin innocently enough with some adorable little personified animal and continue on until the story tilts sharply in an awkward or dark direction. 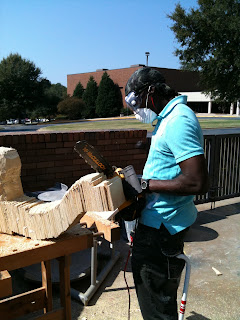 Here we find Kendrick working with a chainsaw to create his sculpture project. It's interesting to think that graceful curves and smooth surfaces can be generated by something as tough and rugged as a chainsaw. And you probably wouldn't think that operating a chainsaw for 3 hours would be any one's definition of fun, but I'm pretty sure he enjoyed it. He worked straight through class without a break. At one point a friend gave him some Mountain Dew but he wouldn't stop working so they had to spray it in his mouth like a marathon runner while he continued carving.

Posted by e-sketchbook at 6:34 PM No comments:

Dr. Tom Pitts, the supreme Art Historian of Lander University would have you believe he is not an artist. Do not believe him.

Because now, for a limited time only, you can see original works of art created by none other than THE Dr. Pitts himself. 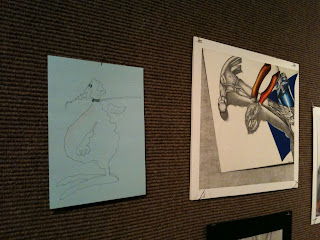 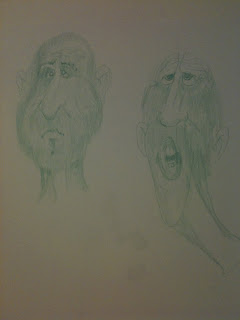 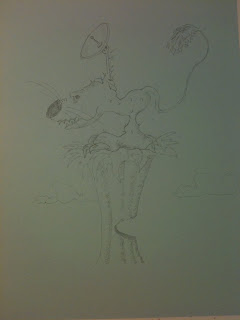 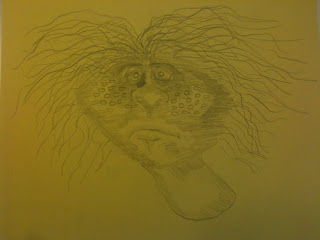 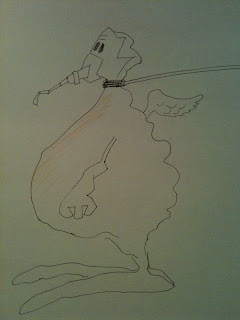 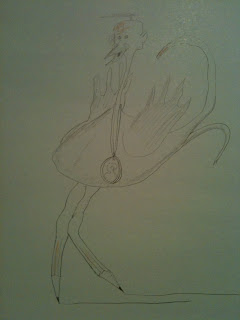 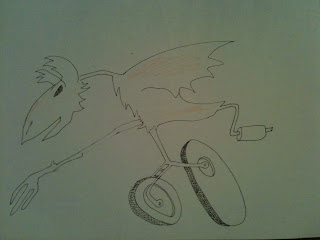 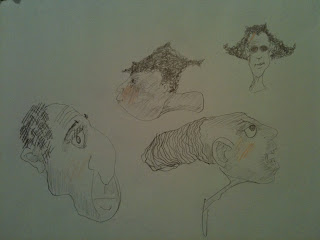 Four of Dr. Pitts original works of art are currently hanging in the hallway gallery. Come out and see them now before someone realizes they're up.

Posted by e-sketchbook at 7:28 PM No comments:

The first half of the semester has been very good. Good students, good projects and good progress in the direction of some early goals. Still a very long commute but how can you complain when you have Gumby living in your Sculpture room to greet you every day with his permanent wave?

When Gumby made the move from his Graphic Design job to his new life in Academia he needed to be able to suit up. These young ladies are tying Gumby's new necktie in place. 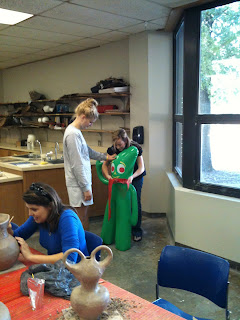 I'm pretty sure I could write a sitcom about my Ceramics class. We have a good time and these students are doing some really surprising work. Thanks to SandySingletary we've got some sweet glazes to put on these projects. I'll need to write about Eli and Doris at some point but there's no time for that today. I have to spend the rest of my time trying to decide why this next photo cracks me up so much... 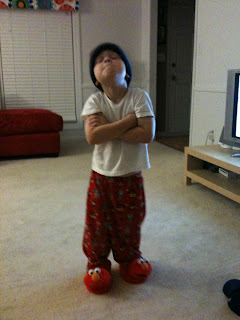 Is it the facial expression? The matter of fact folding of the arms? Maybe it's the beanie on his head? Or could it be the Elmo slippers?
Oh...and go here: http://www.northbrook.info/artshow/
I didn't win an award but it's a good show and a nice website. If you're in the Chicago area you can't see the Cubs play so run by the library and see my drawing in the show.

Posted by e-sketchbook at 5:50 PM No comments: