The Effort
-Billy Collins
from his collection of poems, Ballistics, Random House, 2008


Would anyone care to join me
in flicking a few pebbles in the direction
of teachers who are fond of asking the question:
“What is the poet trying to say?”

as if Thomas Hardy and Emily Dickinson
had struggled but ultimately failed in their efforts-
inarticulate wretches that they were,
biting their pens and staring out the window for a clue.

Yes, it seems that Whitman, Amy Lowell
and the rest could only try and fail,
but we in Mrs. Parker’s third-period English class
here at Springfield High will succeed

Tonight, however, I am the one trying
to say what it is this absence means,
the two of us sleeping and waking under different roofs.
The image of this vase of cut flowers,

not from our garden, is no help.
And the same goes for the single plate,
the solitary lamp, and the weather that presses its face
against these new windows-the drizzle and the
morning frost.

So I will leave it up to Mrs. Parker,
who is tapping a piece of chalk against the blackboard,
and her students-a few with their hands up,
others slouching with their caps on backwards-

to figure out what it is I am trying to say
about this place where I find myself
and to do it before the noon bell rings
and that whirlwind of meatloaf is unleashed.

If you've never read Billy Collins, shame on you. Go out right now and buy something of his, starting with this most recent collection of his work. Collins has the ability to draw the spiritual out of the mundane and mixes cocktails of goofy humor, head-splitting truth, and the ordinarily divine. It will make you a better person and will probably crack you up.
Posted by e-sketchbook at 4:52 PM 1 comment:

One of the hard lessons I learned directly after leaving undergraduate school was that without specific project assignments and deadlines for completion it was easy to become stagnant as an artist. In school I had the benefit of those irritating professors coming up with challenging new assignments and barking at me like a drill sergeant to make sure I finished each project by the appropriate date. Without that irritation, however, I found it difficult to know what I should do next and even when I came up with an idea for a new creative project, the lack of a hard deadline allowed me to idly procrastinate for weeks on end.

During graduate school I focused on this idea of deadlines and began to enforce my own deadlines as a means to developing a larger quantity of work in a relatively short period of time. The creative process became more important when there was a sense of urgency to the production time. I was forced to plan ahead and develop several sketches and ideas before getting my hands on steel or paper. This approach also pushed me to make assessments and changes as the project developed adding analysis and synthesis to the process. Not every decision made on the fly was a good one, but I was generally able to recognize my mistakes and not repeat them in successive projects.

In life after school I continue to work under self imposed deadlines. Often this is made easier by an approaching exhibition date, a request from a gallery, or a call for artist submissions. But if no outside force acts, I still often set a specific date for completing a project. Sometimes these deadlines are selfish in terms of creating opportunities for me to relax or shift gears for a while and focus on something different. An approaching vacation or trip presents a good opportunity to set a deadline the week before leaving. With a project finished my mind is free to move on to other thought processes and I can spend more time away from the shop or art room and spend that time with my family. I may also shift from working on a sculpture project to a drawing project or I may decide to spend a few weeks reading and sketching in preparation for the next big sculpture.

Other times these deadlines are almost impossible. Last year I did the “one drawing per week” deadline. A few years ago I did the “five new large scale sculptures in 3 months” deadline. And this month I did the “finish this one by Thanksgiving” deadline, essentially allowing 8 work days to complete a seven foot sculpture from start to finish. But while I did meet all these deadlines, I’m not always so successful. There was the never-ending sculpture this last summer, there was the acrylic painting that gave me fits last spring, and there was the big sculpture that attempted suicide by leaping out on the highway a few miles from the metal shop. Yet even in the ones I missed, deadlines are always motivators.

I am much more realistic with deadlines for my students although they’d tell you a different story. I fight a constant battle against the slackers and procrastinators and do my best to stamp out such enemies of creativity. Even with my most generous deadlines I regularly have students who turn in projects late despite the tough penalty for tardiness. My goal is to teach each student early on what I had to learn on my own….that deadlines can be most helpful in developing a creative process that works for the individual. Those who listen and observe will find that they gain time management skills, learn creative problem solving skills, and develop advanced techniques in handling each new medium. I’ve watched recently as one student began to realize this and made advances in his design work as a result despite some bad luck. After pulling an all-nighter and subsisting mostly on Red Bull he accidentally nudged the Red Bull can over spilling the contents across his freshly painted design just hours before the deadline. That is of course, the bad luck part. The good part is after he composed himself he started over and nearly completed the new design on time. The really good part is that the new design gave him the opportunity to solve some mistakes and problems he was able to identify in the first draft and he was able to see how much he could accomplish when he was intensely focused on meeting the deadline.

Now there’s a foundation to build on.
Posted by e-sketchbook at 8:30 AM 3 comments: 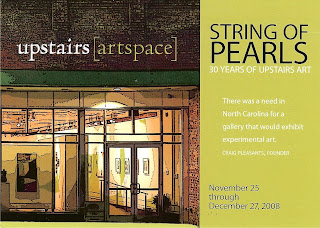 The Upstairs Artspace is marking their 30th anniversary with a special exhibit comprised of nearly 200 individual artists' works. These artists have exhibited work at the Upstairs from 1978 - 2008 and the fact that so many of them responded is a testament to the legacy of this fine contemporary art gallery.
Exhibiting artists are donating an extra 10% of all sales to benefit the gallery and opening reception attendees are asked to donate $19.78 to help sure up the financial status of the gallery.
I know it seems like everyone is looking for some sort of financial help lately, but do not be discouraged from attending this event or from purchasing some exceptional art. This gallery is known for it's focus on the artist - instead of the gallery...something that is rare these days indeed. In fact, I'd go so far as to say that this is likely why the gallery seems to struggle just to keep it's head above water at times.
So if you want some art or if you just want something to do this Saturday night, come out and put a small amount of money to good use. Donate it to a gallery that really deserves it....and that gallery will use it to promote more great contemporary art in the Southest.
The Upstairs Artspace is located at
49 South Trade Street
Tryon, NC 28782
www.upstairsartspace.org
Posted by e-sketchbook at 5:09 AM No comments: 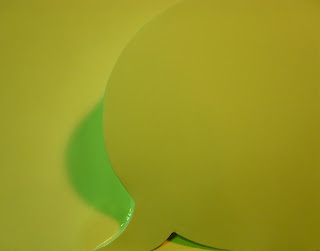 2nd coat of primer. it's gray...the color is from the sodium lights.
i'm tired.

Posted by e-sketchbook at 5:30 PM No comments: 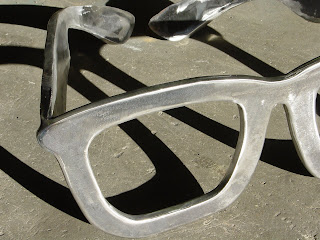 Right now the spaces at the Gallery at Carillon are enriched with some fresh-out-of-the-studio contemporary art.
These paintings and ceramics recall the florid colors of the “Fauves,” the abstracted human forms of Willem de Kooning, the meticulous technique of the French “Pointillists.” This current art bears plenty of other references to 19th- and 20th-century art history.
Of the five artists' work on display, David JP Hooker's multiple-part glazed ceramic construction (it's 8-by-12-feet across a wall) most resembles “Cascade,” Jean Tinguely's permanent installation that dominates the lobby. Though static rather than mobile, Hooker's “Tumblestack IV” promotes unusual juxtapositions, as does Tinguely's work. Hooker, who studied at Winthrop University in Rock Hill, lives in Wheaton, Ill.
But it is the vivid color and loose execution of paintings by Philip Morsberger that will catch your attention.
The huge staring face of the ragged-edged man with the startled cartoon eyes in Morsberger's “Epiphany” is the right scale for the sharp corporate lobby. His lively impasto paintings command their spaces here. Using thickly drawn lines, Morsberger applies abstracted figures of men and dogs, sometimes combined, over a background of splashy scrubbed color painted by the Abstract Expressionist brush load.
The inward-looking, tightly controlled pencil and brushwork of Paul Matheny of Rock Hill makes a good counterpoint to the unleashed mania of Morsberger's brush.
Matheny's small panels are covered with networks of fine lines with some of the spaces filled in with thin layers and thick pinpoints of paint to create the intense “pointillist” appearance. Birds, heads, suns, targets are transformed into a mystical realm of symbols with obscure meanings. In “Seeds,” images of targets form a halo effect around a whitened profile, symbolizing floating thoughts or ideas.
Notably, all eight pieces of Matheny's contain the motif of the silhouetted profile. “Finding Frogmore” features a bottle tree branching from one such head. Dozens of bottles rendered with the inner glow of lapis lazuli float amid stars; the whole surface is rendered with an obsessive texture reminiscent of Arabic or Islamic tile decoration.
Two brightly painted anthropomorphic steel sculptures by Doug McAbee of Spartanburg stand on both sides of the lobby door, acting as otherworldly sentinels.
The work of the solitary woman in the show, Jill Allan of Portland, Ore., is subdued by contrast. Her slab-built earthenware sculptures – two larger-than-life birds nesting among upright wires twisted into spoon shapes –nestle in a quieter corner of the lobby, inviting muted conversation.
The work on view through Jan.16 certainly contains some abstracted characteristics; strictly speaking, however, this is not an abstract show.
Abstract or not, it is a good show, and kudos go to Hodges Taylor Gallery for bolstering the uptown experience with art of good quality. 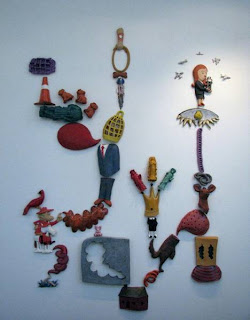 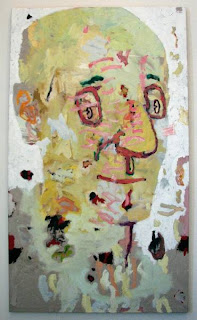 "The Man Himself"
Philip Morsberger
Oil on Canvas 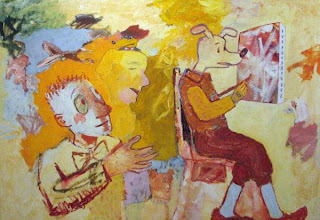 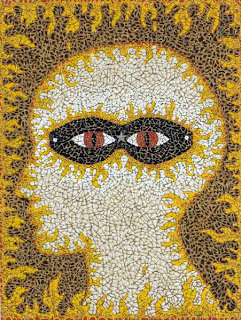 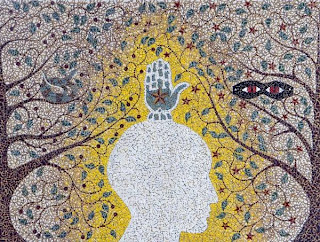 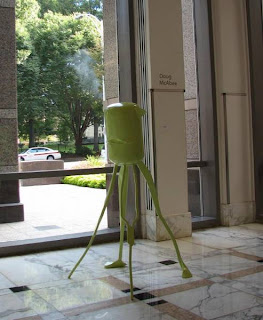 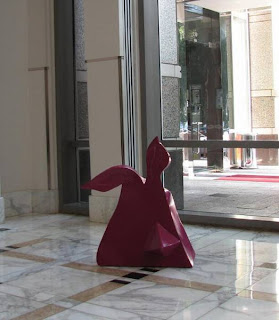 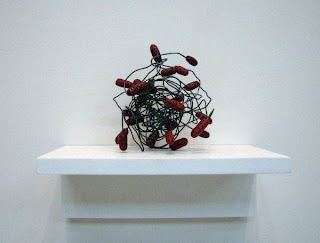 Posted by e-sketchbook at 5:37 AM No comments: 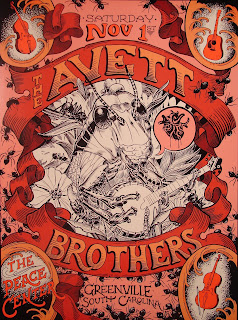 Posted by e-sketchbook at 5:05 PM No comments: