Violet came home from school the other day with a sad face.  This was odd because she’s a very happy 7 year old.  I heard my wife say, for my benefit, “Ask daddy about it, I’m sure he can help you”.

The dad mind immediately kicked into high gear.  What had happened?  What sort of horrible thing was I about to be forced to explain to a 7 year old?  Why had my wife forsaken me and thrown me under the bus like this?

After a minute that felt like 6 years in the dad mind, Violet asked “Daddy, do you think Santa Claus is real?”

It was the Monday after Thanksgiving and not quite December yet.  Violet and Blue had been singing Christmas songs for a solid month.  I know this because I already had to yell at them to stop twice before Thanksgiving.  We were headed deep into Santa territory.

She explained that several of her friends in 2nd grade had laughed at her that day because she believed in Santa.  I find it very difficult to explain here the exact type of pain this caused in my heart.  Punk kids were laughing at my Violet.  They were making fun of her for believing in something.  These little goblins had been on the Earth only 7 years and they were insinuating that they were smarter and more sophisticated than my beautiful, creative, free spirit of a child.

Belief is such an interesting thing to me.  It’s such a simple and overused word and we all think we know what it means.  But it’s also a very misused word.  There are generally two acceptable definitions.  One is essentially synonymous with “think”.  That definition is accepting that something is true.  The second definition is more challenging as it involves “faith”, “trust” or “confidence”.  The first definition has more to do with the mind and the second has more to do with action.

Of course, this is not a debate.  It’s not an argument for or against belief in my God.  Sadly this is one area where my people have screwed things up for everyone over the years.  They’ve treated it like a debate where they try to sit down with rational people and attempt to logically rationalize belief in a completely irrational idea.  And if you’re a fellow Christian reading this, don’t you dare get offended by me using the word “irrational” to describe what we believe.  What we believe defies logic, physics and reason.  We believe in the supernatural.  It’s wonderful and it is irrational.  You can’t rationalize the irrational.  And it’s a fool’s errand to use reason to attempt to argue someone into believing it.

In addition to my Christian spirituality, I’m also an artist.  Yeah, I have enough weird to fill a pickup truck.  In the creative world, it’s not usually considered cool at all to believe what I believe.  The thing is, I find that very odd.  Of all the people in the world to believe in a Creator, a vast and unimaginable artist, shouldn’t the artist be at the top of that list?  Wasn’t it the artists who imagined the first visual depictions of Biblical narratives?  Wasn’t it the artist/shaman who was believed to stand with one foot in the physical world and one foot in the spiritual world to relay messages and visions?  Isn’t it still the artist today who longs to communicate the truths and experiences that lie beyond the reach of mere words?

Of course I don’t expect you to understand what I believe, even when I try to explain it.  You see, my belief is not based on what someone told me.  It’s not based simply on what I read somewhere.  It’s not even based on what my family did.  My belief is based on a mixture of all that, but also a heavy dose of experience.  What I believe has been tested in real life and has come up feeling true.  When put into practice, all that irrational thought held up.  As weird as it was, it ended up holding water.

Knowing that these are my experiences and not yours, I can’t fault you for having different beliefs.  You see, what we truly believe by the first definition ends up causing us to live by the second definition.  Our belief then becomes the main filter through which we experience life.  When things happen, good or bad, those things are tinted by the filter of our belief.  Coming from a Christian background, my filter tends to point me toward a Christian understanding of my experiences.  This is a bias I am happy to live with.  I live with mine just like you live with yours.  If you happen to be of a different spiritual belief system, that doesn’t make you less intelligent.  We just believe different things.  And I’m certainly not going to laugh at you for what you believe.  Doing so would surely only indicate insecurity and ignorance on my part.  And I’m pretty sure laughing at someone’s beliefs would not qualify as love and my belief system is kinda adamant about love.

Belief is a wonderful thing.  Whether you believe in a God or unicorns or bigfoot (I might believe in bigfoot) it is a wonderful thing to believe.  Belief indicates possibility.  It leaves room for magic.  I mean, don’t we all hate the know-it-all guy in our social circles who is quick to tell you everything you know isn’t really true?  Of course we do because deep down inside, we all want to live in world where supernatural things are possible.  We want to live in a world of miracles and wonder.  Sure it’s highly unlikely that a giant ape-like critter has managed to live hundreds of thousands of years only managing to be spotted by crazy drunk people with blurry cameras.  But I want it to be possible somehow.  I would rather live in a world of possibility.  I would rather live in a world of yes. 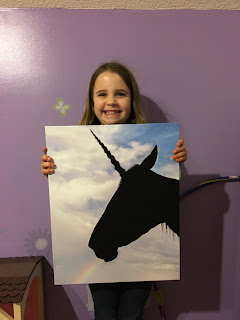 (thanks to ramey, unicorns do exist)


On Christmas eve, Violet went to bed super early because she was afraid Santa would come before she fell asleep and he’d have to skip her house.  She left him peppermint cookies and milk.  She shook off the naysayers and chose belief over logic.  She chose yes.  She chose possibility.  The smile she had Christmas morning was the smile each of us have when what we believe actually turns out to be true.
Posted by e-sketchbook at 7:02 PM No comments: