a busy summer part 1: the artist in residence week

The McAbee Summer Studio Sale was July 17 (thank you to everyone who made that a great day).  After the sale ended at 5:00 pm, we raced to put the art away and return the furniture to its designated places.  Later that night I tried to pack tools and clothes for a week-long stay at 701 Center for Contemporary Art in Columbia.  Sunday morning I was up at 6:00 am to run and to pack up the truck for two conjoined adventures.  The house was a little less topsy but still a little turvy when I left.  This is also an accurate description of my brain at the time.

I’ve been lucky to have so many great opportunities this summer and I don’t mind being busy.  The constant adventures have required me to compartmentalize things pretty tightly.  Leading up to the sale, I tried to only think about the sale and all that was related to that.  Once the sale ended, I focused on the week-long Artist In Residence stay at 701 CCA.  I tried not to think about the weekend adventure in Summerville, SC that was stacked on to the end of that week.

The first adventure was painting a mural and leading a summer camp for the Boys and Girls Club.  This was planned back in the spring and I requested an assistant because, well, I’ve worked with kids before and I knew it would be a full time job just doing the camp.  They hired Katherine to be my assistant for the week.  She’s worked for me for a few years now and I knew I could trust her artistically, that she’d do a good job with the kids, and that she could tolerate my nonsense for a week.  She also has tools and that became a very handy thing pretty quickly.  We arrived Sunday just after noon and got to work prepping the wood panels for the week.  My circular saw and belt sander both died fast and permanent deaths.  They were cheap tools that I bought 25 years ago so it wasn’t a major loss, just inconvenient timing.  Katherine walked to the trunk of her car and popped out a saw and a sander and we were back in business.  We spent the entire afternoon cutting and sanding a few hundred square feet of wood panels.  We got some take-out food from across the street and then primed all the wood before quitting for the day. 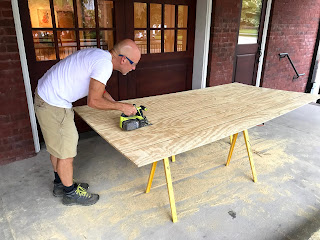 After a good run on Monday morning, we were ready to meet the kids when they arrived at 9:00 am.  It was chaos.  No, not really, but even though we were very prepared and had everything ready for the kids, including step by step instruction, it sometimes felt chaotic.  Around noon I realized the idea of actually producing a work of art on my own while also leading this camp was not realistic.  The kids took both of us full time to manage in order to keep them from getting bored and off task.  Jasmine was their main leader from the Boys and Girls Club and she let us do our thing and only stepped in to manage the kids when she thought they were being too loud.  We went through brainstorming and sketching ideas in the camp that day.  The kids left at 2:30 pm and we were exhausted.  Still, we had a few hours of clean-up and prep work for the next day, so we took a short snack break and got back to it.  Late that night I was able to put some marks down on my mural and once I had an idea of where that was going, I felt a little better. 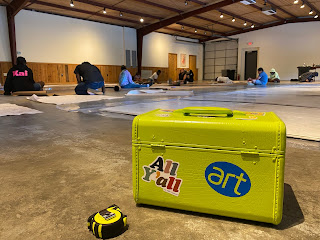 Tuesday was more of the same.  A good run through the mill villages helped me gather more ideas and feel a sense of the place where my mural is designed to go.  A couple of bananas and some coffee had us ready for the kids at 9:00 am.  We both spent all day working with the group trying to get everyone ready to start painting.  Most of Tuesday was spent getting students to think about composition and how to fill the entire space with images or words.  We broke the Elements of Design down into bite sized chunks and talked about balance a good bit.  Most of them seemed to understand quickly, which was cool for a group with an age range from 5-13.  We may have had an orange and a granola bar for lunch.  At 2:30 the kids boarded their bus and we took a quick break before spending several more hours getting paint ready for the next day.  The clean-up and prep work was a killer.  I spent a little more late night time on my mural before turning in exhausted. 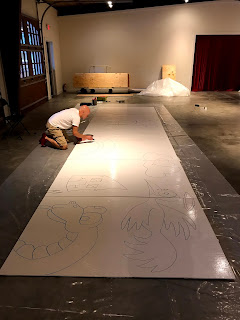 I’ve been a bit lazier this summer with waking up.  When I’m working at home, I may sleep until 8:00 or 9:00 am.  This made the 6:00 am alarm feel a bit traumatizing.  Once I was up and outside running, I felt so much better.  We were very lucky weather-wise, though.  My friend Paul Matheny, a Columbia area resident, once told me “there’s nothing between Columbia and Hell but a screen door.”  I mean, Columbia is called “famously hot” for a reason.  But we lucked into some cooler than usual weather this week.  There was a bit of rain for a few days, but the mornings were dry and the morning air seemed cool while running.  I am grateful. 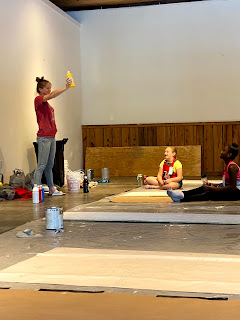 Once the boys and girls were painting on Wednesday, I slipped back to my mural and let Katherine take over.  She advised, encouraged, and directed each student while also providing paint and clean up instructions.  Most of this was individual and the kids worked pretty diligently.  They seemed to enjoy the process.  I helped out in a couple of the busier times, but I was able to get a lot more done on this day.  After the bus left, I continued to work on the mural while Katherine handled the clean-up and prep for the final day.  By midnight on Wednesday my mural was looking more and more finished. 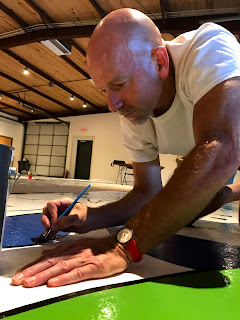 Thursday was the final day for the camp and that meant we had to get everyone to a finish line with their mural by the end of the day.  Some students were “finished” as soon as they started.  Some took their time and could have worked another month.  Art teachers will understand this.  It’s a delicate balance and you have to have things prepared for students to do during down times.  Some had to wait for paint to dry, some actually finished, and some just got bored and wanted to do something different.  We had cleaning sessions and we had helpers to do all sorts of tasks during these times.  We also had a community mural on extra wood panels that students worked on during these times.  After lunch on Thursday, several of the ones who were finished helped transfer the community mural over to the panels before it was time to go.  We ended up finishing on time and we somehow managed to keep the paint from becoming a permanent part of the building we were in.  It took a lot of plastic and so many hours of scrubbing, but we did it. 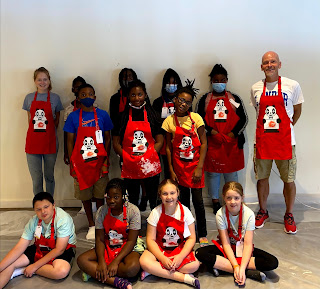 Most nights we grabbed quick take-out food from nearby restaurants and ate in the mural painting room.  Pawley’s Front Porch was a highlight of the take out week.  We ran to Main Street one night late and caught a restaurant just before it closed.  On Thursday we needed to get out of the building for a while so after a few hours of cleaning, we headed back to Main Street to sit and actually enjoy some food.  It was ok, but not stellar.  All week I had wanted to get a Double Doozie from the cookie place.  Blue and I LOVE Double Doozies and I had stopped at this location about a year ago to grab a couple of Doozies to take home and had a somewhat bad experience with the worker who clearly didn’t enjoy her job.  I tried to run by and get one on Wednesday but they had already closed.  We were a little earlier on Thursday, so as soon as we finished eating, we briskly walked to the cookie place.  There was a considerable line but Double Doozies are worth a wait.  As we waited in line for just over 20 minutes, I noticed that most of the patrons were buying ice cream (Marble Slab occupies half the space).  Katherine noticed that there didn’t seem to be any Double Doozies on display.  I didn’t worry.  It takes 30 seconds to make one.  You take two cookies and squeeze white icing between them.  As a long time Double Doozie buyer, I’ve seen this happen on many occasions.  We typically order 4 because if you buy 3 the 4th one is free.  Blue and I eat 1.5 each and Violet eats 1.  When I finally got to order, the young guy looks at me for a second and then walks over to the cookie side of the restaurant.  He looks around aimlessly and then opens a cabinet door.  He slowly comes back and says, “Umm, we don’t have any.  Sorry.”  I took the high ground.  I thanked him and walked out.

We found a restaurant across the street and decided to just grab a dessert there.  I opened the menu and to my delight I saw that they had cremé brulé.  I almost forgot about the cookie.  The waitress came over and I ordered.  She looked at me like I had said something in a foreign language.  “Umm, I don’t think we serve that”, she said.  I showed her the menu.  She said she’d go ask.  Guess what?  They didn’t serve it.  No dessert for me.  I finished my water and headed back to my room to eat peanut butter M&Ms mixed with disappointment. 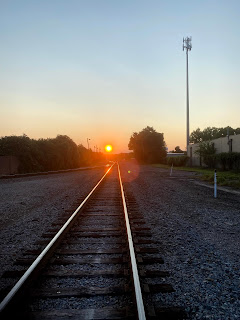 Friday started at 7:00 am and that was delightful.  I ran through the USC campus and passed people going to freshman orientation.  The sun was rising over the city skyline and I was feeling good.  We had made it through the camp and I only needed a couple of hours to put finishing touches on my mural before storing it.  There was still a LOT of clean-up to do but after a few hours, we returned the building to the condition we found it.  My paint dried enough to move the panels to storage just as G and the kids pulled into town.  They helped move some stuff and then helped us pack all our stuff into the cars.  We all drove to California Dreaming and had a nice late lunch together.  It was the best food we’d had all week and just what we needed before starting the second part of our adventure. 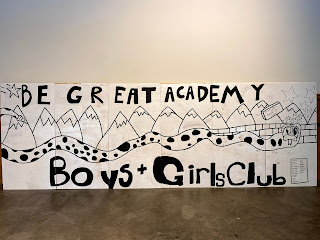 I think I may have been at fault for being late for the next part.  Lunch was good and I took my time enjoying it.  I had to do a bit of texting since I had been missing from online stuff most of the week.  When you compartmentalize as well as I do, you tend to totally ignore messages that come in if they don’t fit in the compartment you’re in.  I don’t see this as rude, it’s simply a way of surviving and doing my best on a project.  It was getting close to 3:30 pm and we were still sitting around the table.  We still had a drive to Summerville ahead of us so we decided to get on the road.
Posted by e-sketchbook at 12:55 PM