I forget what happened for most of November this year, but the last few days of it were really nice. 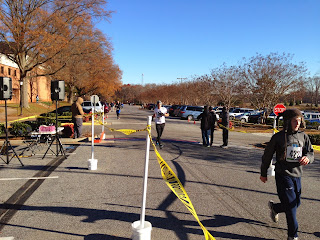 Brother Daniel couldn't run the Gobble Your Giblets 5K this year but he's the kind of brother who gets up early on Thanksgiving anyway just so he can come cheer his brother on and take a photo of him crossing the finish line.  He's a pretty good guy.  That's me in the super-cool white Lander University Sculpture shirt.  I ran hard, almost exploded on the killer hill and made good time, but still got beat by a lot of people.  It was fun. 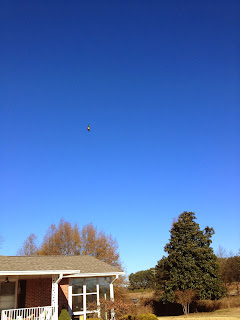 After the race, a drove to mom's to shower before the ginormous feast she prepared.  When I got out of my truck the first thing I saw was a large red tailed hawk circling low over the house.  Coincidence?

Mom cooked again this year for more than 50 people.  And these are McAbee people mostly, with huge appetites.  I scoped out the desserts and piled my turkey and ham lightly so I would have room left for the sweet sampler platter.  We ate, we visited a bit and then we hit the road. 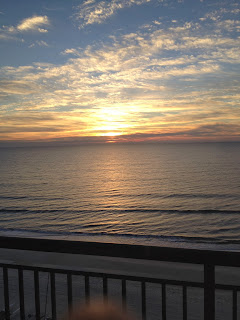 Half of our Thanksgiving tradition is to feast at mom's with the entire McAbee family.  The other half is to hit the coast and enjoy the beach for the rest of the weekend.  We love the beach any time of year, but I always seem to enjoy it more when it's cold.  The light is great, the wind is brisk and everything is beautiful.  We made good time this year and caught the sunset just after check in.  I couldn't get that photo to load through iCloud....man, that iCloud is temperamental.  We had our usual Thanksgiving restaurant meal and the kids were so excited about being at the beach, they made sure we were up in time to catch the sunrise. 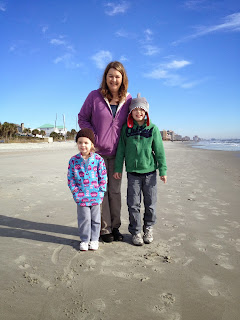 G is shrinking, the kids are growing and just look at that light.  That blue....certainly worthy of naming your firstborn son, am I right? 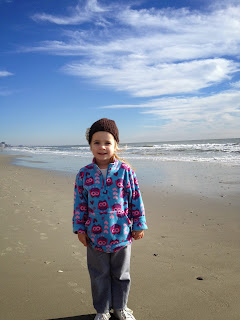 Violet in her happy place. 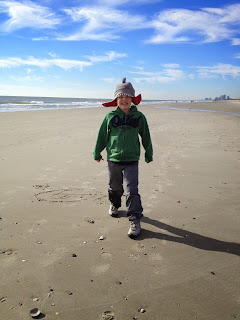 And Blue in his happy place.  It was still early on Beach Friday and it was cold.  Very cold.  But that didn't stop him from getting his pants soaked with sand and water from the knees down. 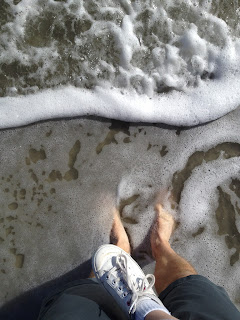 Violet wanted to jump in the waves as we do in the summer.  She couldn't understand why we wouldn't be able to in late November.  The great parents we are, we thought we'd be clever and make this a teachable moment.  I led the kids in our swimsuits to the door and we bolted out across the sand to jump in the waves together.  We hit the cold water and of course, the kids didn't think it was nearly as cold as I did.  I made it out to knee deep water before my legs went numb.  We ran back inside to the warm pool area.  The kids had blue lips and their teeth were chattering and they were begging to go back to the ocean again.  So much for that plan.  The image above is when we went back out later and someone talked me into carrying them out into the water again.  I'm a sucker. 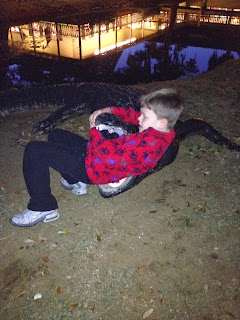 Blue shares my appreciation for silly photos.  I talked him into wrestling with the alligator. 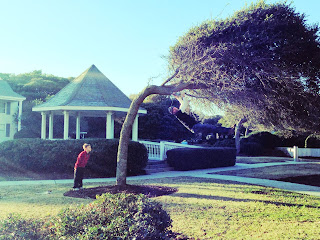 And this year we tried to top our photo from last year.  Last time we posed him in front of the tree to make it appear he was blowing it over.  This year I jumped up into the tree and G timed it to look like I was being blown with the tree.  Not as good as last year, but still goofy. 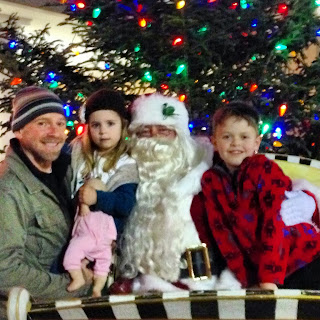 We are quick learners, though.  Last year we suffered through a Christmas program that was far too long for our collective attention spans.  This year we timed it just right so that when we finished our ice cream, we walked out just in time to see Santa arrive to light the Christmas tree at the Market Common.  We hit the book store while the people with patience waited in line to see Santa and when we came out again we walked right up and had our turn.

Blue jumped right up and started sharing his list of "wants".  Violet wanted nothing to do with the bearded guy.  Eventually I slipped over and held her close to Santa and he leaned over and jolly talked her into almost smiling.  She said nothing, but she didn't scream, so I'm calling it a victory.

Blue never stopped with his list the entire time.  He was listing things from the time he climbed up until we made him get down.  He seemed to be running out of ideas at the end because as he jumped down I heard him ask Santa for "one of those back massager things".  I asked what he meant and he said that sometimes his back itches where he can't scratch it and he needs something to reach it for him.  I suppose it's the simple things. 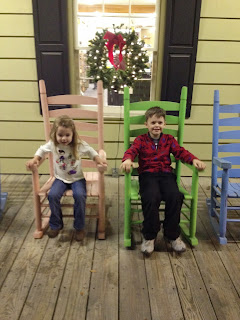 And now that Thanksgiving is done, these two are ready for Christmas.
Posted by e-sketchbook at 7:26 PM