a dog on the loose and student exhibits

Lander art students have had two exhibits in the last two weeks and they've shown some great work.  But before we get to that... 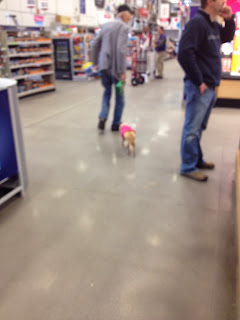 I've spent a ton of money in Lowe's the last week or so and while I was waiting for paint mixing one morning, I noticed a chihuahua, off leash, cruising around the store in a hot pink puffy jacket with a white fur collar.  I tend to notice things like that.  After her third lap around the area I realized she was trailing behind the elderly gentleman with the black baseball cap.  He ambled around like he was lost and muttered to people as he passed.  The dog would follow loosely behind and would venture over to other aisles to sniff shoes before trotting to catch up.  I looked around to see if anyone else thought this odd.  No one seemed to notice the free roaming dog in a trendy coat.  No one.  Maybe the dog was trained to alert to blood sugar issues or maybe the dog was better at helping customers than some employees, but I'm pretty sure dogs that wear trendy jackets are not allowed in Lowe's, especially off leash. Now back to our story. 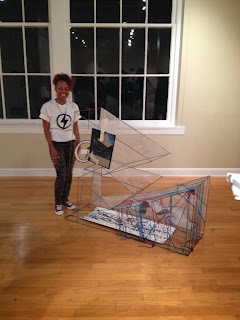 A fun group of our art students traveled to Italy last summer.  As a part of their study, they were required to create art in response to their trip and put together an exhibit.  The County Bank Gallery at the Arts Center of Greenwood had an opening and the exhibit was held there.  The work was as creative and diverse as the group of students.  That's Mia up there sporting her sculpture shirt.  Mia is the Queen of Sculpture, meaning she's the sculpture studio assistant.  She created three dimensional graffiti letters and mixed in 3D and 2D pieces within the letters. 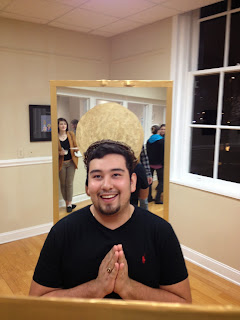 That's Oscar, no doubt influenced by the religious works he saw in Rome.  Kayla appears as a vision in the mirror. 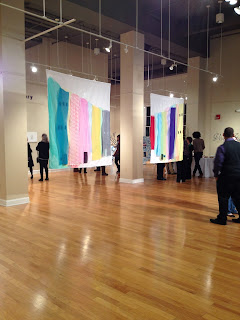 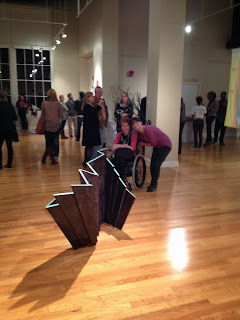 Emily's wood sculpture was based on a parasol she purchased on the trip.  Photo-bombing provided by Colleen and Haley. 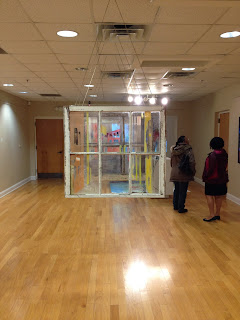 Cessquatch used her 2D and 3D skills to create this visual memory from an Italian street. 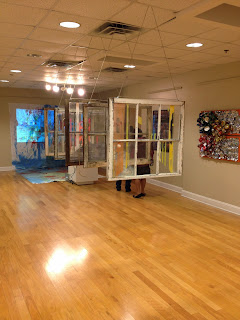 Different parts of the scene are painted on each window. 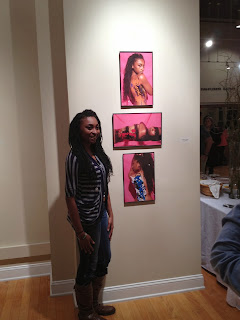 And Ashanta did her own modeling in her photographs. 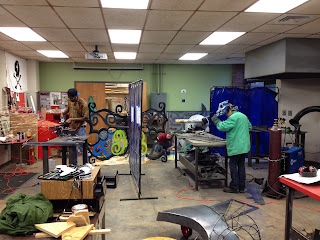 After that reception and before the next one, everyone was scrambling to put the finishing touches on their sculptures.  It warms my heart to see the studio this full and to hear it so noisy. 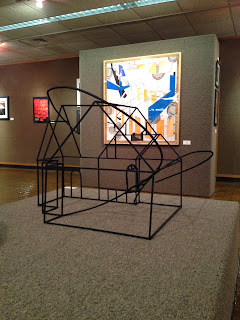 Last Thursday was the reception for the Annual Juried Student Exhibit.  This year we moved this show to the end of the fall semester to free up more time in the spring semester for the Senior Exhibit.  Our friend Paul Matheny from the SC State Museum was our juror and he selected some great work. 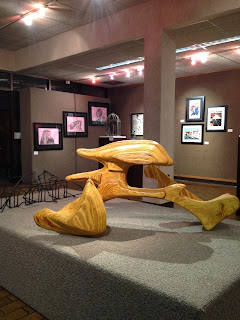 All of the media areas were well represented and once again we had a ton of awards to present to our students. 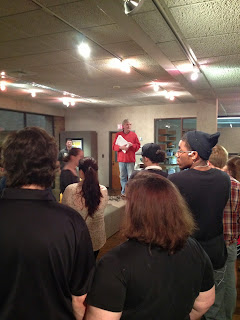 Tom Pitts always does our awards presentation and this one was special as he's decided to retire after this year.  His sense of humor will be irreplaceable. 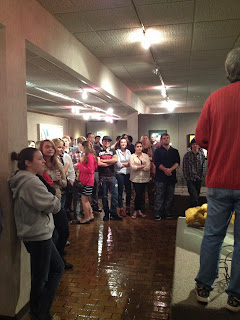 And when he holds court, the students listen intently. 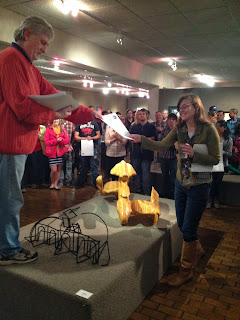 Our Friends of the Gallery made generous donations and chose a stack of awards to give out.  Tom worked his way through the pile with ease and he never once stepped back and fell off the riser.  That's Abby getting her purchase award for her drawing. 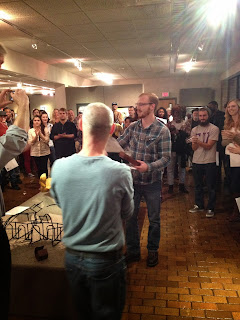 And that's Tyler getting his Best in Show Award for the cool wood sculpture in the photos above.  He was stunned to win but everyone was pleased with the selection. 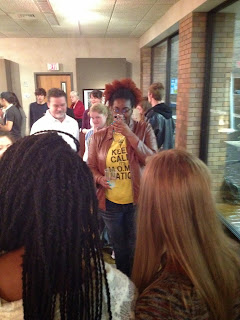 That's Shawny taking a photo that I was photo-bombing.  Poor Ashanta and Cessquatch just wanted a photo and I ruined it.  All three of these ladies will be graduating in May.  They're going to miss me. 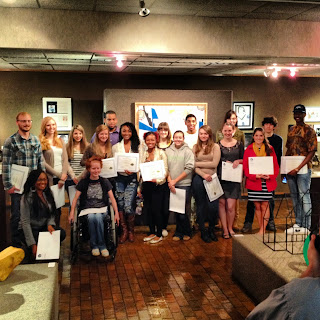 All the award winners...let's see if I can get this right...Starting with Tyler on the left, Daisha, Danielle, Erin, Colleen, Brandy, Sean, Ashanta, Mia, Katertot, Ashley, that guy who's name I can't remember because I haven't had him in a class yet, Ashley, Caitlin, Abby, Laura, James, & KJ.