The One About David Freeman

I met David Freeman unofficially in the fall of 1990.  I was a freshman (with hair) at Winthrop and I would pass him in the halls of McLaurin from time to time.  Like all the professors there, I held him in some sort of mystical, intriguing position in my head.  Back then we felt it was important to show respect to our professors so we refrained from calling them by their first names.  Mr. Freeman was always "Mr. Freeman" to me, even after I got to know him better.

Mr. Freeman began teaching at Winthrop in 1972 - the same year I was born.  He retired from full time teaching a couple of years ago, spending all that time as a fixture in the Department of Fine Arts at Winthrop.  In the hours he was not teaching next door in Rutledge, he held down the front corner of McLaurin.  Like many other professors, he always seemed to be in his office studio creating.

During my sophomore year I officially met him as my professor in Painting I and what little I know about painting, I owe to him.  (This is no reflection on him as a teacher, I'm just not a painter.)  You know how you can remember seemingly random, specific things a teacher says for the rest of your life?  At midterm in Painting I he lined up my work and said, "You have a way of working well with color relationships.  I'm not sure you know you're doing it, but it's in there."  He was right about the not knowing part.  I was clueless and perhaps this is why the feedback stuck with me all these years. 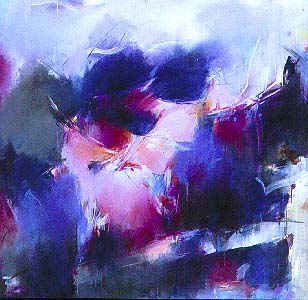 Mr. Freeman had a way with color as well.  The above painting is his from 2001 and I borrowed it from an old online edition of Carolina Arts (www.carolinaarts.com).  The title is "Shelf Life" and after seeing him always working on a painting just like this in my undergrad years I was sure he worked nonrepresentational.  From an interview printed in Carolina Arts (http://www.carolinaarts.com/1101winthrop.html), Mr. Freeman indicated that he did, in fact, work from representational imagery.  He loved plants and music and taking photographs and apparently all three of these things played important roles in his creative process.  I remember the photos tacked beside his large canvases, the classical music slipping out of his propped open door and his potted plants spilling out from his office into the hall.

If you saw Mr. Freeman outside of class and not in his studio, you saw Mary Mintich.  They were peas and carrots when they were not working.  Always going to lunch together or one always seeking the other out for some feedback.  Their friendship was a great one.  When I started getting serious about going back to school for my MFA I contacted Ms. Mintich, my first sculpture professor and set up a time to talk with her.  She said we'd go have dinner and chat.  It went without saying that Mr. Freeman would also go with us.  And he did.

When the time came for me to choose my graduate committee, I chose Mr. Freeman to be a member.  It was a decision I gave little thought to, honestly.  It made sense to me for him to be in the group who would eventually decide if I was good enough to be released back into the wild.  And it was kind of him to agree to be on the committee since it meant he would have to read several drafts of a boring thesis.  A thesis that turned out to be about color - almost as if he could see it coming years earlier.

Mr. Freeman eventually gave his consent to me receiving my MFA and I have his signature on my copy of my thesis.  I'm not sure exactly why yet, but for some reason that signature is what came to mind when I learned that Mr. Freeman passed away earlier this week.  I wasn't wealthy enough to own any of his paintings but I have that signature.  Maybe the signature is a tangible reminder of the intangible gift he gave to me as a teacher.

You see, there were students who thought Mr. Freeman was too positive.  Critiques at Winthrop could be brutal and there were plenty of professors who were known for bringing tears regularly in critiques, so much so, that students came to expect it.  Mr. Freeman provided balance to that extreme.  Trust me, he brought up plenty of things I needed to work on both in Painting and in the Advanced Drawing courses.  But his delivery was such that I didn't feel like I needed to take my own life after the critique.  He was honest and straightforward but when there were positive aspects to point out, he was sure to point those out.  Mr. Freeman was encouraging both in class and in one-on-one critiques.  He said some very kind things to me as I finished up grad school and I remember those things just as well as I remember what he said years earlier about color.

In art school encouragement can be a rare and precious commodity.  Mr. Freeman knew that and I, and countless other students over the years, were lucky to Mr. Freeman as a professor.