It's good to be here.

Last weekend was the annual art department retreat at Lake Greenwood.  Our dear friend and professor of photography, jon holloway invites us down to his family's lake home just before the start of the fall semester each year.  The house is beautiful and it sits on a very pleasant part of the lake.  This was our view: 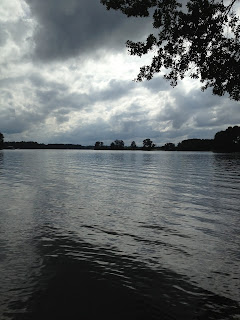 We arrived and got down to business with our first meeting of the semester.  In that first meeting there's a year's worth of stuff to cover.  Jim, our fearless leader, had everything organized and ready so we covered the important things quickly.  Our department is an amazing thing.  Really, I could tell you how well we work together, how well we support one another and how great each individual is, but you wouldn't believe me.  So you'll have to trust me when I say it's a great group and the fluidity we have in the department helps make problem solving quick and easy.

We took an intermission after the first half of the meeting to celebrate Jim's birthday. 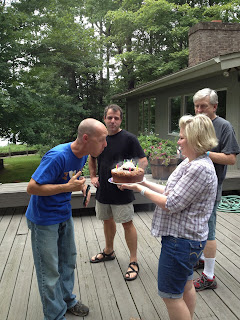 At the end of the second half of the meeting, it was time to begin cooking our potluck dinner. We all brought whatever we thought we would want to cook and as if to prove what I just said about our group, we had an excellent meal complete with appetizers, salads, entrees, bread and desserts.  And since bacon is our department mascot, Jim's rosemary, molasses and black pepper grilled bacon sticks are pictured here for your enjoyment. 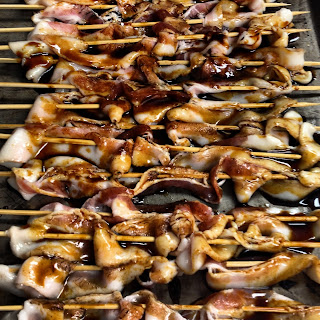 After dinner we goofed around, shared photos of our summer adventures and stayed up late telling stories.  The next morning we were up for breakfast featuring bacon, of course, and coffee.  There were also pancakes and eggs.  As has been the case most of this summer, it rained a few inches during the morning, delaying our planned river excursion for a few hours.

We used the time to finalize some decisions and to continue discussion on some topics from our meeting.  As soon as the rain tapered off Jim, jon and I drove way down a muddy road to drop off jon's truck at the designated river take out point at the river cabin seen here. 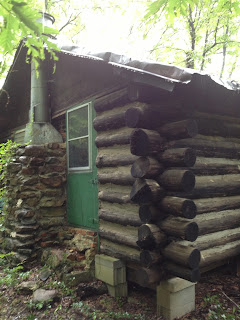 The cabin and the long muddy road are both on jon's family farmland.  At that particular time, though, it was jon's flooded family farmland.  There was mud and water everywhere and there were a couple of hairy moments as we drove in and drove out.

Once we were back at the lake, we gathered up some food and water and tossed the boats into the lake.  Here's the "before" group photo. 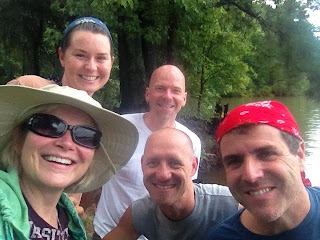 From the dock we paddled across the lake to the dam and portaged over down into the Saluda river.  As I said, it's been raining pretty much all summer so the river was several feet up and it was racing along very quickly.  The water wasn't rough, just fast, shaving about an hour off the length of our trip.  Here's jon and me right before we got back in the boats to start the river run. 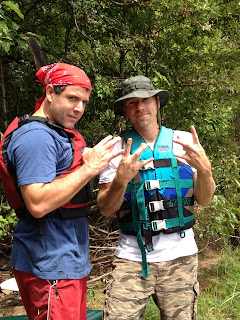 If you're paying attention you'll notice that there are no photos from the river here.  We all spend way too much time on our iphones and sometimes I think I can feel my soul being sucked down into that tiny little screen.  For our outdoor adventure, I chose to leave my iphone at the lake house to ensure that I would be focused on being outside and living in the beauty of my surroundings.  Too often I view nature through the filter of that screen as I'm trying to take a photo.  It was nice to see something amazing and beautiful and to not be tempted to grab my phone for a photo.

The river was lovely.  We saw herons, osprey, otters and fish.  We saw the clear lake water clash with the red muddy runoff creeks downstream where the water mixed in small explosions under the water.  There was sun and clouds and 14,000 different greens along the way.  And after about 3 hours we rowed our boats up on the grass near the cabin.

Here's the "after" photo: 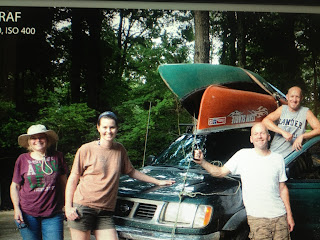 It was interesting driving all three boats out on jon's truck.  We tied the canoes to the top and crammed my kayak and all our gear into the back.  And then we threw mud everywhere as we climbed back out to civilization. 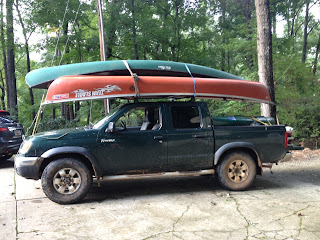 By the time we got the boats unloaded and tied back to their respective vehicles, it was once again time to eat.  Our department takes food very seriously and we tend to eat a lot.  Singletary and Esnipes handled breakfast, so Jim, jon and me were responsible for dinner.  We grilled steaks and chicken and had baked potatoes and a few vegetables.  Oh and we found an old rotten baseball floating down the river and we dried him out and he was our guest of honor at dinner. 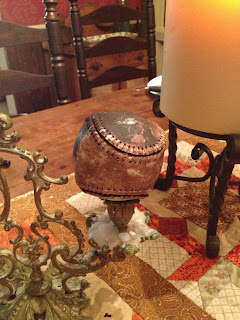 After dinner we headed down to the dock for a moonlight cruise up the lake.  jon took us upstream a while where we stopped under the almost full moon and broke out jim's homemade ice cream and some cookies. 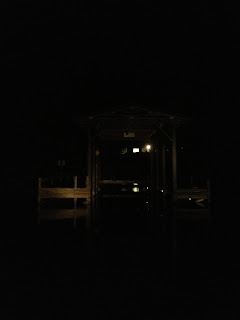 There were a few ghost stories and other fun tales before we docked again and called it a night.

The next morning we were up early to clean up and pack.  Once everything was in order, we drove back down to the family farm for a little target practice.  A few of us brought some rifles and pistols for a fun shooting session.  Here's our department chair blasting some plastic bottles: 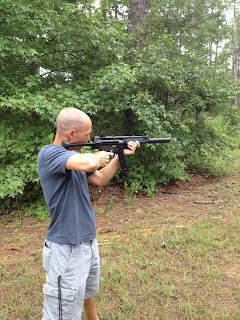 And we couldn't resist taking some funny photos at the hunting lodge.  In the photo below Singletary is telling you to "git" off her property. 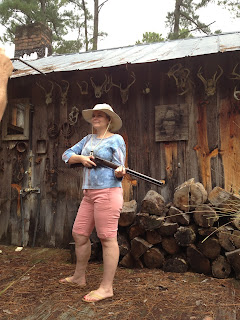 It's great to have a photographer around.  He can take the goofiest, happiest, nicest bunch of people and somehow make them look like mean, gun-toting country folk. 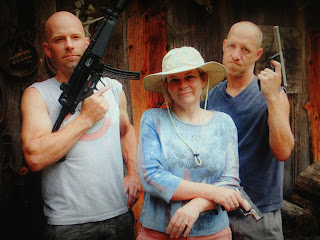 And with some convincing and the help of technology, the photographer was able to get in on the fun. 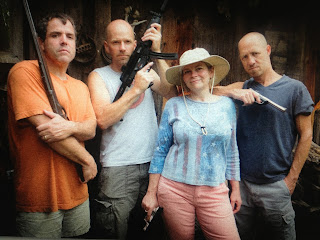 Now the guns and boats are put away and we have another week to get our studios in order before the students return.  It's going to be a very good semester.