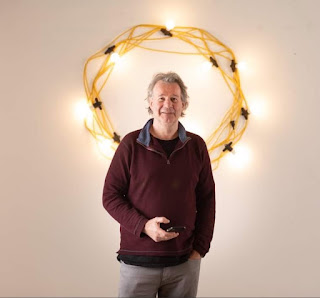 Last Friday morning I received a mass email informing me of the passing of arts advocate Wim Roefs.  Ten days earlier, Wim and I had a text conversation about a sculpture he purchased from me.  When people we know die, we tend to do that thing where we think of our personal interactions with the recently deceased.  You’ll get mocked for it on social media where folks will say you found a way to make the death about you.  In truth, we all do it.  We think about the last time we saw them, the first time we met them, and the impact they made on our lives.

Wim liked the truth.  That’s one of the reasons we got along well.

I met him in an interesting way.  I had several sculptures in a nice gallery in downtown Greenville in 2005 and he happened upon them.  He didn’t know me so he reached out by email, telling me his young niece was quite fond of a particular sculpture.  Soon I asked for her mailing address and we arranged a nice little art trade, my sculpture for her drawing.  She signed her drawing and noted that she was in 2nd grade on the back.  Her drawing has been in every studio I have maintained since I received it in 2005.

A few years later Wim contacted me about putting some public sculptures out in an interstate town several hours away.  Due to all sorts of strange circumstances, that exhibit ended very late and Wim himself delivered my sculptures back to me because he felt bad about the delay.  He wasn’t just a nice, funny guy, he was a decent man.

I knew that Wim owned a gallery and represented many artists, and while he never asked me to be one of those precious few, he did stay in regular contact to check in on me.  When he was the juror of an exhibit, he would often choose my work for the show.  At the reception, he would tell me that my photographs of my work were terrible and that I needed to do better with documentation.  He said this not as an insult, but as a helpful tip, and I listened.

He was always booked during my summer studio sales but a few years ago, he and his wife Eileen called about a week after the sale.  They were on the road and wanted to know if it was cool if they stopped by.  I cleaned up the mess, dug out some of the art I had put back into storage, and they stopped for a visit.  Every artist I knew wanted Wim to like their work.  They knew he was one of the main arteries of contemporary art in our state and for him to like your work would mean some sort of success.  During those years, he said some very complementary things about my work, but I was never sure if he liked it or not.  He was very careful with his words.  Nevertheless, he encouraged his wife to pick out a drawing and they left with it that day.  This was the first thing Wim bought from me.

In subsequent summers he would text me to tell me he was working the gallery during my studio sale so he wouldn’t be able to attend.  He told me that it was a risky move to have a studio sale with reduced prices for people who drove out to my house.  He made it clear that it wasn’t a bad move on my part, but that it would prevent galleries from wanting to represent me.  I was very aware that I was cutting out the middle man but I had chosen this path because of the freedom it allowed me.  Wim would poke at me verbally, laugh, and we’d move on.  Then he’d call and tell me the city wanted to buy a public sculpture from me.

As the pandemic drove most of us to the internet for a connection with the outside world, Wim embraced Instagram during 2020.  I was doing my ridiculously fun “Art Remixes” and posting them every day.  Violet and I were also posting our “Quarantunes” songs each day.  Early on, Wim messaged me on Instagram to say he was enjoying the goofy posts.  He would still text occasionally about art but a lot of the banter now happened on Instagram.  He made fun of me for running so much, which is how I learned that he ran a marathon.  Once he even laid claim to being the greatest waffle maker of all time, can you even imagine???  Eventually he texted me with official business saying that he wanted to find a way to give an artistic presentation to the silly things I had posted during quarantine.

This turned into his idea of having a show of my Art Remixes at 701 CCA in Columbia.  Then he had the idea that we could try to have the first real art reception there since quarantine ended and he invited Violet to perform.  Wim was no stranger to music, nor to hosting bands.  This was huge to Violet as it was her first real public performance.  We played many of our favorite Quarantunes songs and she got to do a couple of songs solo.  Wim really made Violet feel special.  It was great.  Wim then managed to turn that exhibit into a drive-through exhibit at the SC State Fair.  He was always thinking of creative solutions.

Not long after that, Wim was in touch again to see if I had interest in doing a mural and hosting a weeklong workshop for the Boys and Girls Club.  This was part of a very busy summer but it was also the opportunity that gave me the most in-person time with Wim.  We had many conversations during that week and beyond, that continued to confirm what I had learned about him.  He cared deeply about his friends and about the life of the arts in South Carolina.  He looked for artists who were being honest in their work and who were actually working hard doing their work.  When he found them, he supported them.  He bought their work and encouraged others to buy their work.  He brought them into his circle and used his massive influence to benefit them.

Much of the artistic success I have found over the last several years owes a debt to Wim.  After hearing the news of his passing, I’ve thought back over our interactions.  I can see that Wim supported me as an artist.  I can see how he was brutally honest with me over the years in an effort to sharpen me.  I can see that he chose to interact with me personally and professionally and for all of this, I am grateful.  I’m also grateful for the ways in which Wim allowed me to know him.

I’ve read a few things written about Wim by artists who were in his circle over the last few days.  They all spoke kindly of him and all wrote about the impact he had on the arts in our state.  Thinking about his impact in his absence undoubtedly turns our thoughts inward.  Hearing about death forces us face to face with our own mortality but it should also force us to process what we have learned from the deceased.  For those who did not know Wim, there’s a line in his obituary that reads, “Wim was alive, challenging and mischievous, always looking for the next bit of fun to be had.”

That resonates as truth.

I learned so much from Wim over the years about how the arts work in South Carolina.  I learned that it is a quest forward, with the goal to be better every day.  I want that to be my approach and my work ethic.  We carry pieces of those who have formed us as we live.  Wim was a person who gave pieces of himself freely.

If you knew Wim, I’m glad for you.  If you did not, I hope you’ll ask someone about him.  But whether you knew him or not, there’s something to learn about him from the last line of his obituary:

May we all reach across the gap he leaves behind, love each other and continue to build community with a quest toward excellence – only excellence.”