Lumpy was the distinct impression I got anyway.  There were rocks and rivers and all, but everything was just so lumpy.

Last Thursday I made the drive to Nashville for my day as a guest at Belmont University.  Right up front I'd like to say that I am aware that Belmont is looking for a 3D faculty member and I was reminded of this several times while on campus, but my visit had nothing to do with this search.  I was invited to speak by the School of Religion, if you can believe that, and to specifically speak about the collision of religion and the arts as it applies to my creative work. 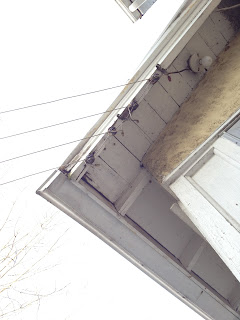 An old friend of mine teaches in the School of Religion and he teaches some of the Religion and the Arts classes.  He lives in the house in the photo above where I stayed for the trip.  He invited me to speak to his class and to present a slide lecture at one of their Convo events.  The event was advertised with the poster I showed you recently and with this little blurb written by my friend:

"Have you ever stepped into a rabbit hole that dropped you face first into a Salvador Dali painting where Billy Graham was eating peaches and talking theology with Donald Miller? Well, it's kind of like that."

Keep in mind that it was in his best interest to make me sound much better than I really am.  But speaking of Billy Graham.... 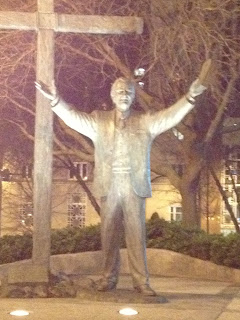 There is a large statue of him in front of the Lifeway building in Nashville.  I think it's related to the proportions but there's something unsettling and awkward about the sculpture. 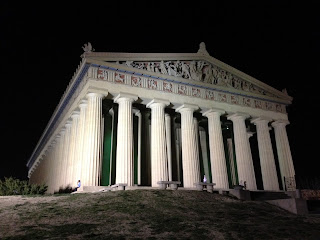 Equally odd is the presence of this large scale Greek building from my art history book in the middle of a southern town built on country music.  Who knew Athena loved Johnny Cash? 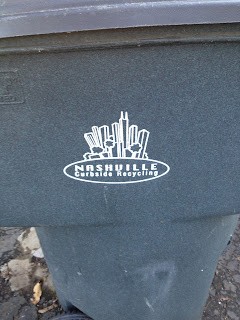 But this is the wrong state for Athens.  The architecture on the trash cans was more appropriate and I was assured I was in the correct city just in time for a 45 mph tour of the sights.  I saw it all....I just saw it all very fast. 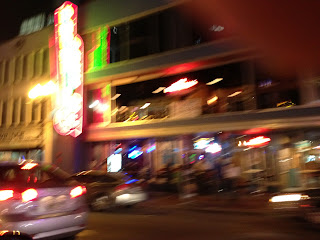 Yes, that's a blurry photo of the moving car tour and yes that's my finger in the top right corner.  I used to blame all my bad photos on the camera in the 3Gs.  Now that my phone is new and the camera is great....I suppose I'll have to admit that I'm a terrible photographer.  Sorry.

The blurry tour was appropriate for Nashville.  There are tons of celebrities in and around Nashville and it's pretty common to see them in Whole Foods, Starbucks or the Belmont campus for that matter, but it's one of the prides of Nashvillians to act like such sightings are no big deal.  It really is a big deal but it's not cool to act like it's a big deal.  It's also not cool to go to the touristy places.  I learned it's a bragging point to tell how long you've lived in Nashville and have never even gone to those areas.  I understand all this but I'm just enough of an idiot to not care. 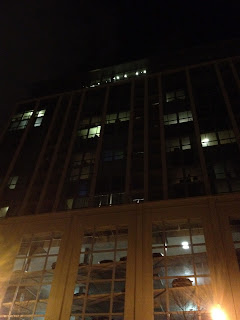 And enough of an idiot to seek out what my sources say is where Taylor Swift lives when she's in town.  And if those sources are correct, that's what you're looking at in the photo above.  I know, you're thinking, "Really Doug, Taylor Swift?".

And the answer to that question is simply, yes.  I am not ashamed.  Deal with it.  In this country...and especially in this town if you can make it big by writing your own songs, playing several instruments to create your own music, and by singing those songs well, then you have my respect.  You know what we call those people who criticize talented people like this?  We call them Sandy Singletary....or we call them jealous.  -Don't worry, Sandy doesn't read the blog. 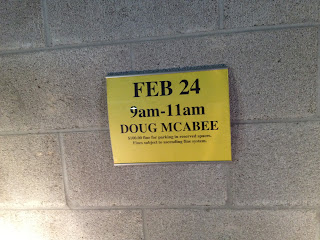 So on 2/24/2012 for a whole 2 hour span, I got to be a little bit famous.  Ok not really famous, but I did get a personalized parking spot on a campus where parking is a pretty big deal.  I'll take it. 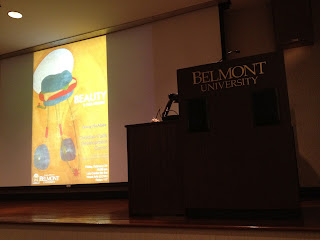 I spoke about beauty and absurdity and how those two elements swirl together in my drawings and sculptures.  If you wanted to go and couldn't, just imagine me standing there at the podium and it looked just like that.  Here's the Cliff's Notes version for you:  The Monty Python guys were skilled at using absurd humor as a tool to get viewers to laugh, to think, and to be more creative in their problem solving.  Beauty is more than the aesthetic value of the surface (or of Katie Holmes) and is quite often tied to personal experiences instead.  Add in some Sharpies and some welded steel and you get my drawings and sculptures. 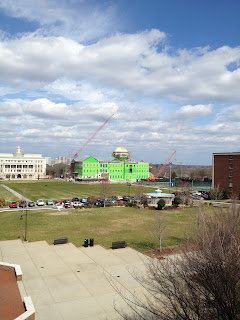 The photo of the new building on Belmont's campus is for my students.  I thought they might want to see how plywood was bent and cut to make the half sphere of the dome.  Very helpful now that the plywood project is over, right? 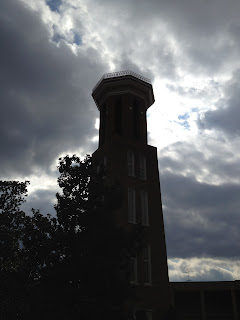 The bell tower/water tower/prayer chapel.  An interesting combination that is almost Python-esque. 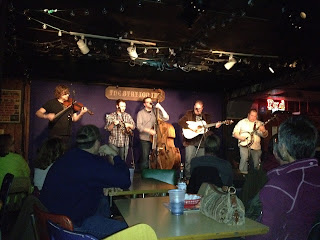 No one is allowed to leave Nashville without having some sort of musical experience, so after all the official academic work was done we were invited to join a lovely family at a music dive called The Station Inn.  It's a bluegrass venue and we got to see Blue Moon Rising play a great set of music after working all day recording on Music Row.  They fired and rehired the new banjo player, cracked everyone up several times and played some great music.  It was an excellent way to end the trip. 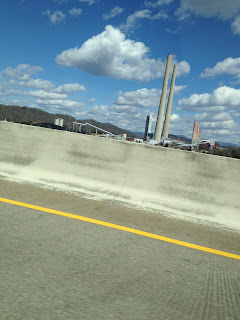 Lumpy with smokestacks and clouds.

I'd be more impressed with a picture of Taylor though! Sandy must exemplify the haters in "Mean", no? ;)

If you were on facebook, you'd know that Mike and I love Taylor, too. Just sayin' ...

Facebook is the devil. but you and mike are awesome. I hope mike is loving his job. hey from us to both of you.

sandy is indeed a hater. I tell her so often.