all words, no photos

The fall semester is in full swing.  I've got 24 Sculpture I students using power tools, many for the first time ever.  I'm having to take photos of them using the jigsaw and table saw so they can email the photos to their dads who are flabbergasted that they are using power tools.  It's funny how fast fear can be overcome.

Then there's 7 Advanced Sculpture students who have already sent public art proposals to a client and are well into their second project.

Oh and the MAT students who are nearing the end of their first project.

And there are meetings and deadlines galore and everything is pretty much chaos.

So a few things to pass along amid the chaos....

Go to downtown Greenville and visit Gallery Seventeen at 17 West North Street.  I left a few sculptures with them and it would be nice for people to go in and ask about my work.  It's a great gallery space and downtown Greenville is awesome so consider this an excuse to go eat and enjoy a stroll.  The website is www.gallery-seventeen.com.

I have a sculpture in the Spartanburg Artists' Guild Annual Juried Exhibit in the Spartanburg Art Museum.  The opening reception is next Saturday.  I think there's some sort of popular vote award so if you're into that sort of thing, swing by and vote for my sculpture.  Or better yet, vote for your favorite work in the exhibit, even if it's not mine.  I have several artist pals in there and their work is pretty great.

The Art Center of Greenwood is featuring the work of Lander University's art faculty in the show "Independent Study" during the month of October.  This is going to be a really cool exhibit.  Somehow Lander has gathered together a department that is second to none in terms of teaching, making art, getting along and laughing.  The exhibit is designed to showcase the very diverse creative processes of the professors and how cohesively that diversity can be brought together into one exhibit.  Even Dr. Tom Pitts, the art historian is making work for the exhibit.  And as a special bonus, he and I will be doing a live drawing performance during the reception on the night of October 17 from 5:00 - 6:30 pm.  I think we will be giving away the drawings we produce during that time.  And, this performance will keep Tom and I from having to stand around awkwardly during the reception, so it's a win-win for us.

And then there's this super cool sculpture event  we're having at Lander on Saturday, October 5.  But I'll explain that one later.
Posted by e-sketchbook at 3:14 PM No comments:

the time that kid from forest gump spilled beer on me

Several months ago G somehow managed to get an email announcing a special invitation only ticket sale for a concert.  Mumford and Sons, it said, was coming to Simpsonville, SC.  That's right, Simpsonville, South Carolina.

Of course we dismissed it as spam or a joke because, well, they're Mumford and Sons and this was, well, Simpsonville.

But we were curious enough to look it up and sure enough, it seemed to be true. We really enjoy Mumford's music and they are the type of high energy band we like to see live.  So then the real question came:  Were we willing to endure the large venue?

If you've read any of my concert rambles here, you know that while I'm a big fan of music, I'm not a big fan of crowds.  And concert crowds are worse than regular crowds.  Generally speaking, they're drunk, obnoxious, loud and sweaty.  Not a few of my favorite things.

Maybe it was the lure of seeing the spectacle of a band this big play in such a small town or maybe it was the laid back attitude of summer, but for whatever reason, I agreed and G signed up for the "chance" to be invited to purchase tickets.  She enlisted her friend to also sign up just in case.  That proved to be a good move since G never got invited but the friend did.  Tickets were purchased and I tried not to think about it.  Back then September was a long way away.

Over the last few weeks, emails started coming in to ticket holders with weird alerts and warnings in them.  There were traffic advisories for the entire town of Simpsonville and rules stating that the outdoor venue would not be allowing the normal lawn chairs and blankets.  It seems the place sold out in minutes and apparently the number of tickets sold translated into that number of humans only fitting in the place if they were stacked upright, shoulder to shoulder.

Dread set in.  We strongly considered selling our tickets.

Again, not sure why, but we procured a babysitter and went full speed ahead with concert plans. 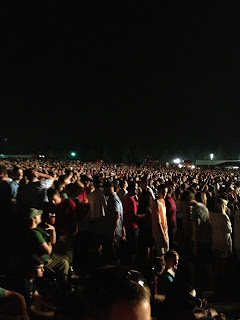 That was the crowd to my left during the second opening act.  That's a lot of humans.  When we arrived, much later than the emails encouraged, we walked in with no line and staked out a good spot.  We had plenty of room and we spread out our group of Alicia, Austin, Ali, G and me in battle formation ready to defend our territory.  Every once in a while people would push forward into our airspace and dance and bump into us but usually they moved on after the old bald guy started at them for a few minutes.  Still, ever so slightly, the crowd encroached on us until we were surrounded and our space was shrinking.

We all saw people we knew.  Some spoke, others waved, and still others just saluted through Instagram.  One guy wandered into our zone and spotted Ali and began to chit chat as if they were long lost pals.  When he wandered off again Ali explained that she had not seen him since high school and that he was in the movie Forest Gump when he was a child.  He was apparently one of the southern boys who teased Gump about his leg braces.  A while later on a beer run, the same guy happens back into our space and speaks to Ali again.  Then it happened again.  It was starting to be a thing...where he was going to keep doing this accidentally on purpose as a joke all night.  But suddenly it stopped.

I don't drink beer.  I don't care for the taste and I abhor the smell.  Of course this means that I always get beer spilled on me.  Always.  The first concert I ever attended - a full cup spilled down my back by Sir Drinks Alot.  The second concert - beer down my back.  I think maybe there have been two shows, maybe three where I got out un-beered.

The kid from Forest Gump was several beers in by the time of his last visit.  He was loud and staggering and was apparently attempting to balance by having a full cup of beer in each hand.  You don't need a map to see where this is going, huh?  He speaks again to Ali and stumbles on by me where, right on cue, he loses his balance and begins to fall right where I'm seated on the grass.  I knew it was coming and I made contact with him just as the first drop of beer made contact with my skin.  I shoved him up off of me and held him there until he got his balance.  He didn't seem to like what happened but he must have realized that I didn't like it either.  When I told him to "Go." he moved right along and that was the last time we saw him.  A very kind man behind me handed me a couple of clean napkins and I was able to remove most of the beer from my arm.  This act of kindness softened my anger and saved my mood.  Thanks nice guy behind me. 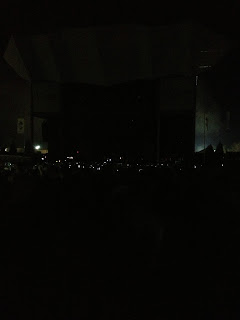 Eventually Mumford and Sons took the stage.  As soon as they did, I was reminded of another human trait I dislike.  In the photo above they've started singing the first song.  The stage lights are out and those thousands of lights you see in the photo are phones and cameras lifted high in the air.  We do love our phones, don't we?  So much so that we prefer to experience the great moments of life through that tiny little rectangular screen.  If you're an alert reader you've already noted that I must have had my phone up in the air too.  And you're right, but someone had to document this silliness didn't they? 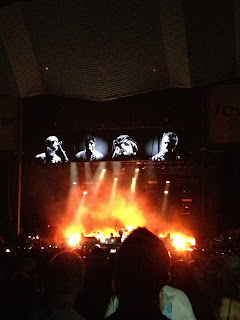 Then, to add insult to injury, most of us in the crowd were so far away, we resorted to watching the four monitor screens mounted above the stage for close-up views.  So then people were using their tiny rectangular screens to take photos of larger rectangular screens that were recording what was happening live right in front of them.  It all makes my head hurt. 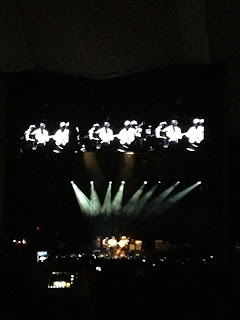 In all seriousness, Mumford and Sons put on a great show.  They go at their instruments fiercely and they play and sing very well live.  During song breaks they indicated that this was their first time ever in South Carolina.  I tried to imagine them walking around Target during the boring afternoon hours and hijacking the tour bus to run through the Taco Bell drive through at midnight.

We fought the sea of cars and eventually got out of the parking lot and made the trip back down the interstate just in time for about four hours of sleep before the next workday.  As usual, G and I both swore this was our last large venue concert.  We agreed we were too old for this sort of nonsense.  But Langhorne Slim is playing near us soon and G tried earlier today to talk me into another large venue Avett show.  Maybe I'll hold out and this will be our last concert.  If so, I'm going to blame that kid from Forest Gump.
Posted by e-sketchbook at 8:40 PM No comments: