After days of hearing that there was another chance of snow coming our way, I started to pay attention to the forecast.  This one was billed as a huge storm.  "One for the record books" they kept saying.  The threat was so bad that on Monday night they called off school for Blue on Tuesday.  While he rejoiced, G was less happy about the approaching storm.  She has to be at work regardless of weather, so the days of mess that were predicted meant she was going to be dropping the kids off and camping out in her office for the week. 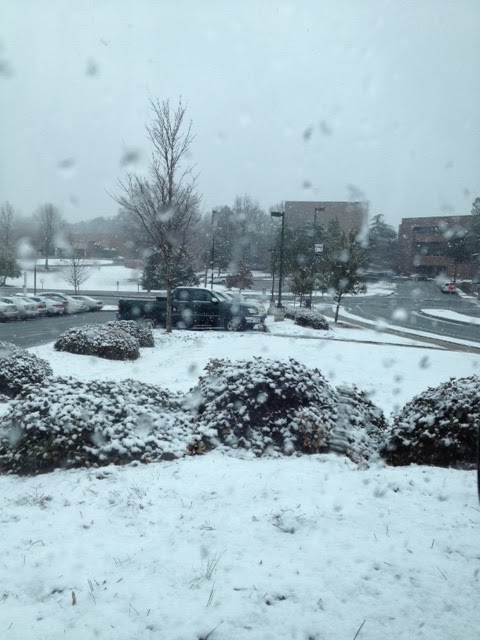 Tuesday morning they drove that way and I drove this way.  It snowed steadily on my drive and when I arrived at school this is what I saw. And within minutes of being on campus, I got the official email stating that the school would close at 11:30 and remain closed for the next few days.  That meant that we had about half of our Advanced Sculpture class to work before leaving.  After allowing for getting everything out, putting everything up and cleaning up the studio, we would have accomplished very little.  So instead of working on our current projects, we all went out on the front lawn for a little snow sculpting.  The students came up with the idea for what to make and they were pretty excited to get to use the chainsaw. 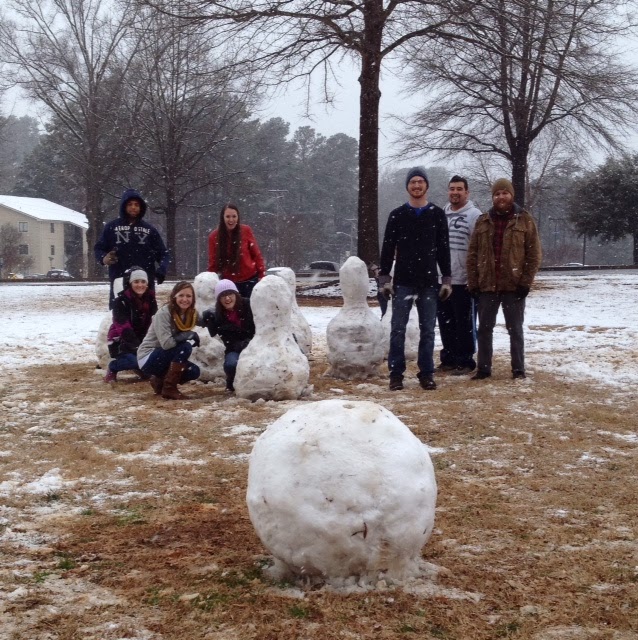 They created a bowing alley with a ball and 6 bowling pins.  That's the class in the photo with a couple of extra helpers included (Sean, Laura, Cessquatch, Katertot, Caitlin, Tyler, Oscar & Andrew).  And of course, they hit me with snowballs the whole time. 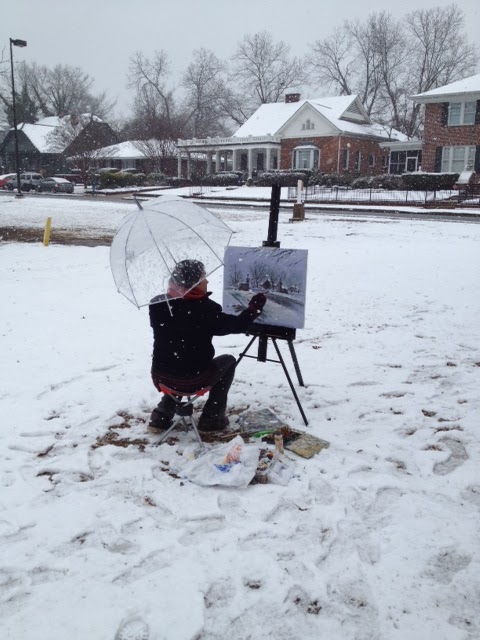 When we were done, I started for home but stopped when I saw Professor Liu sitting out in the snow painting.  He's a visiting scholar from China and he's having an exhibit of his stunning work in our gallery in a couple of months. 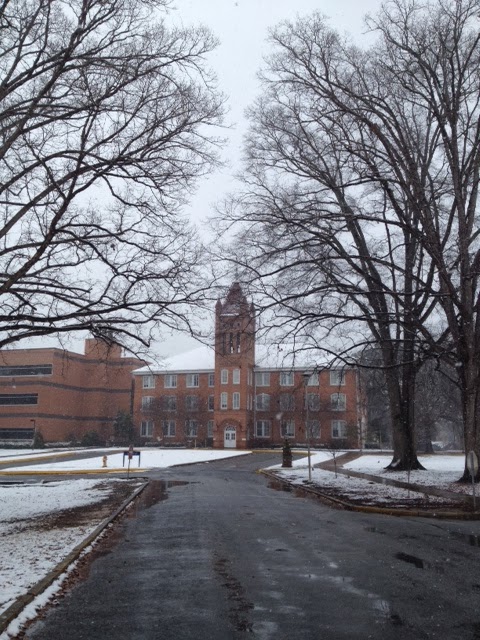 The snow was still coming down pretty good, but was not sticking to the roads. 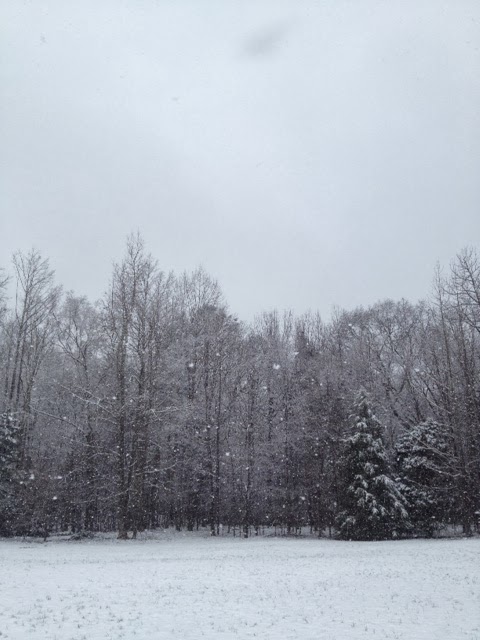 When I got home I got my run in before the snow got any deeper.  The weather people told us that this was just the first round of light precipitation before the main storm arrived.  I prepared myself for complete and utter boredom knowing that the wife and kids would not be home until the storm was gone and the roads were clear. 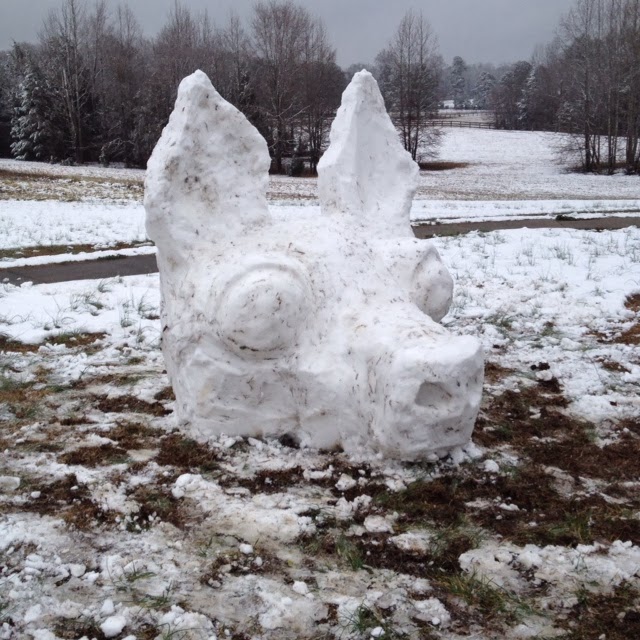 The first round of snow was the good kind...it was wet enough to stick together.  I had plenty of drawing, sculpting and school work to do, but I couldn't resist the chance to get out in the snow and play a little.  That's a 5 foot tall chihuahua head in the front yard. 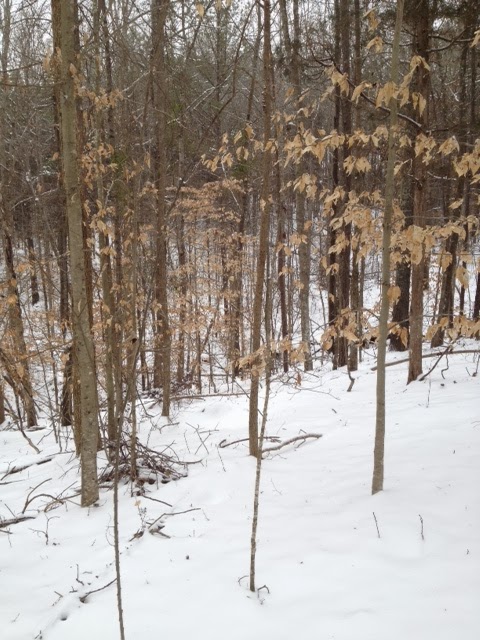 Wednesday brought more snow through most of the morning.  I did draw a little, but I also got out and walked, took photos and rode the 4 wheeler in the snow. 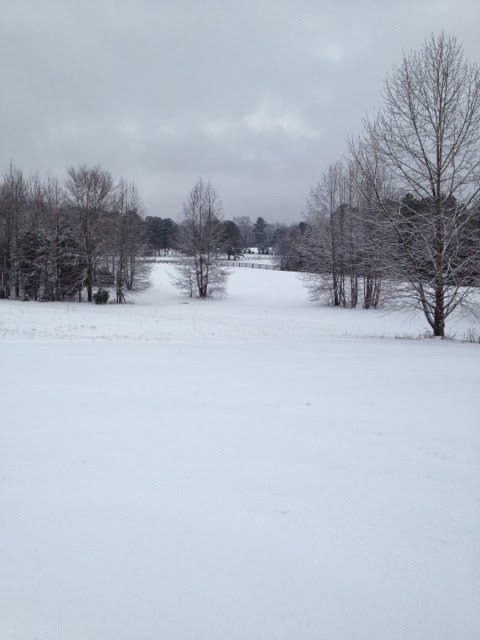 The morning snow was followed by some sleet and freezing rain.  The roads were white and despite the state of emergency, it seemed everyone in town was determined to get out and drive.  A guy across the road was four wheeling in his pasture but everyone else was driving on the icy road.  I stuck to the 4 wheeler.  By this point I was so bored I was carrying on conversations with the dogs.  They mostly seemed confused. 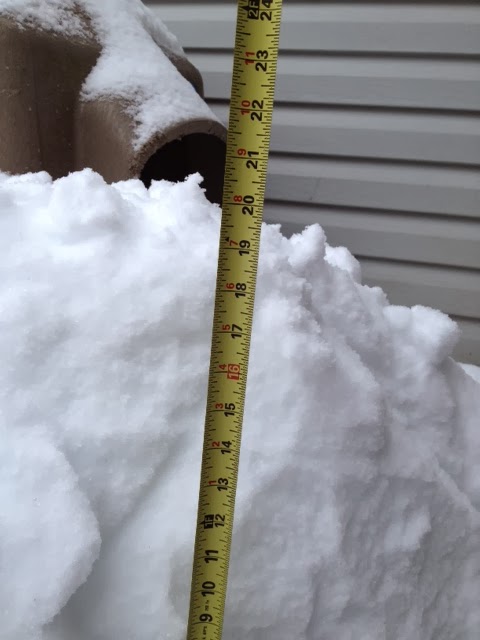 The wind kept blowing the snow off the roof of the house.  When I tried to go out this morning I met some resistance from the 20 inch snow drift on the back deck. 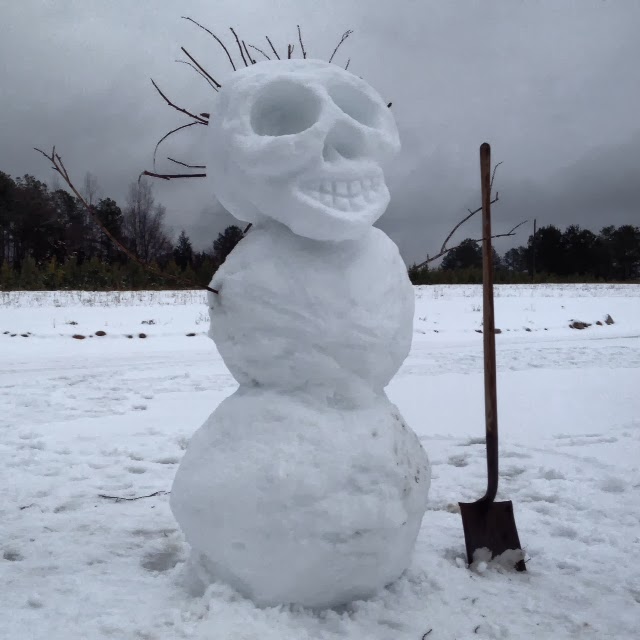 After a nice hot breakfast and coffee I discovered that the 2 inches of snow on top of the layer of ice was perfect for sculpting.  I set out to make a more traditional snowman for the kids to enjoy when they got home.  I was bored by the time I got to the head, so I got a little weird there. 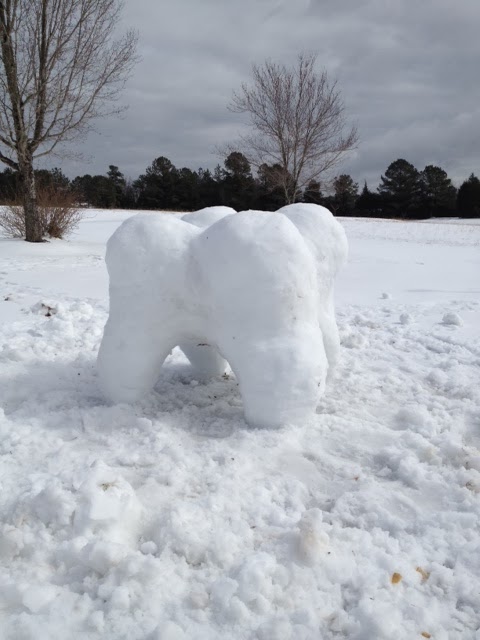 By the time I finished that one, I was warm so I shed my jacket and hat and started on another snow project.  My back was hurting from rolling up snowballs but I couldn't miss the chance to make snow sculptures.  It's not every day we get to do this hear in the south.  I ended up making a giant molar to complete the snow sculpture park in the front yard. Not everyone was having fun.  G was trying unsuccessfully to sleep in her office, Zeke had cabin fever and the chihuahua couldn't figure out where the grass went or why her feet were so cold. 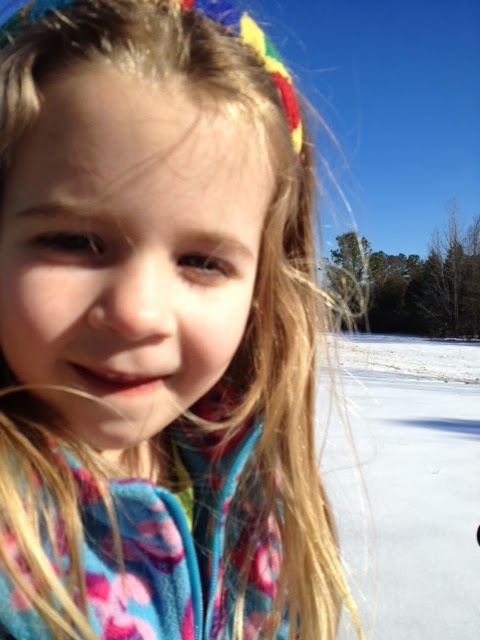 After the sun came out and cleared the roads, the family came home to play with me.  Violet and I did some 4 wheeler doughnuts and I pulled them on the sled through the melting snow. 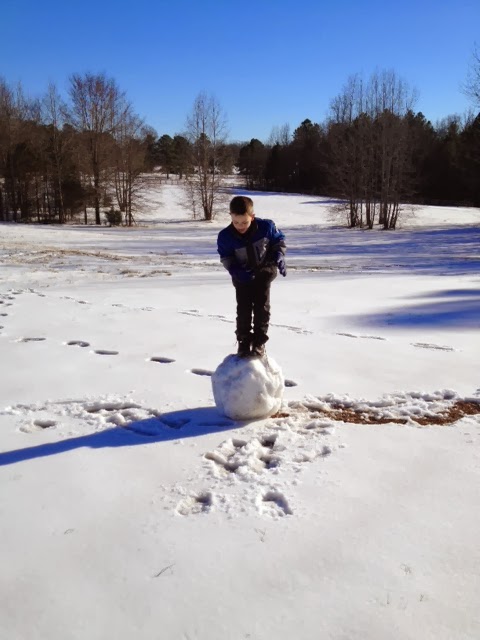 Blue started a snowman of his own but then realized how fun it would be to balance on it and then jump off. 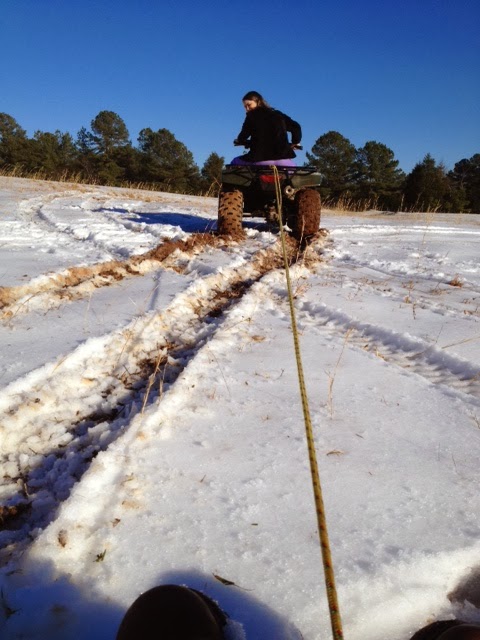 I even took a shot at being dragged behind the 4 wheeler.  It was a slow start and just as was thinking I was too heavy, G took off and slung me around the field as I held on for dear life.

Next week the temperatures are predicted to be in the 70s and I'm thrilled.  I've enjoyed the very cold winter and the snow and now I'm ready for a warm beach and a cool breeze.

Posted by e-sketchbook at 6:37 PM No comments:

So, it snowed here.

It snowed 1-2 inches in our area and you know what?  It was a big deal.  The northern transplants love to make the jokes about how an inch of snow shuts down a southern city.  They love to trash talk our snow driving and our Department of Transportation's inability to keep the roads dry and ice free.  They even laugh at us for calling such an event a "storm".

Here's the thing:  It snows here maybe once a year.  I'm talking about a notable snow event being more than just a "dusting" of snowflakes.  With such infrequency, of course we do not know how to drive in the snow, of course our DOT doesn't spend much on de-icing and of course we're going to get excited about such a rare and beautiful event.

Yes, we are aware that it took 10 feet of snow to cancel school wherever you emigrated from, but think about why you relocated here.  Because the weather is better!  We actually have 4 seasons here in the south, even if summer lasts for about 6 months.  And when we get our annual or biannual snow event, it gets us a holiday from work or school and lets us act like children for a whole day.  Perhaps best of all, the temperatures often return to 60 degrees 24-48 hours after the snowpocalypse and life gets back to normal.  These miniature winter vacations are reason enough for us to go a little crazy and binge on milk and bread.  (And just as a side note, not a single one of your southern friends and neighbors enjoy hearing about how silly we are in the snow or how much bigger the snow was "up there".  We are only smiling and nodding because we are kind and hospitable here.  We just want you to be quiet and hold on to the rope while we pull your sled with our four wheel drive pickup truck.) 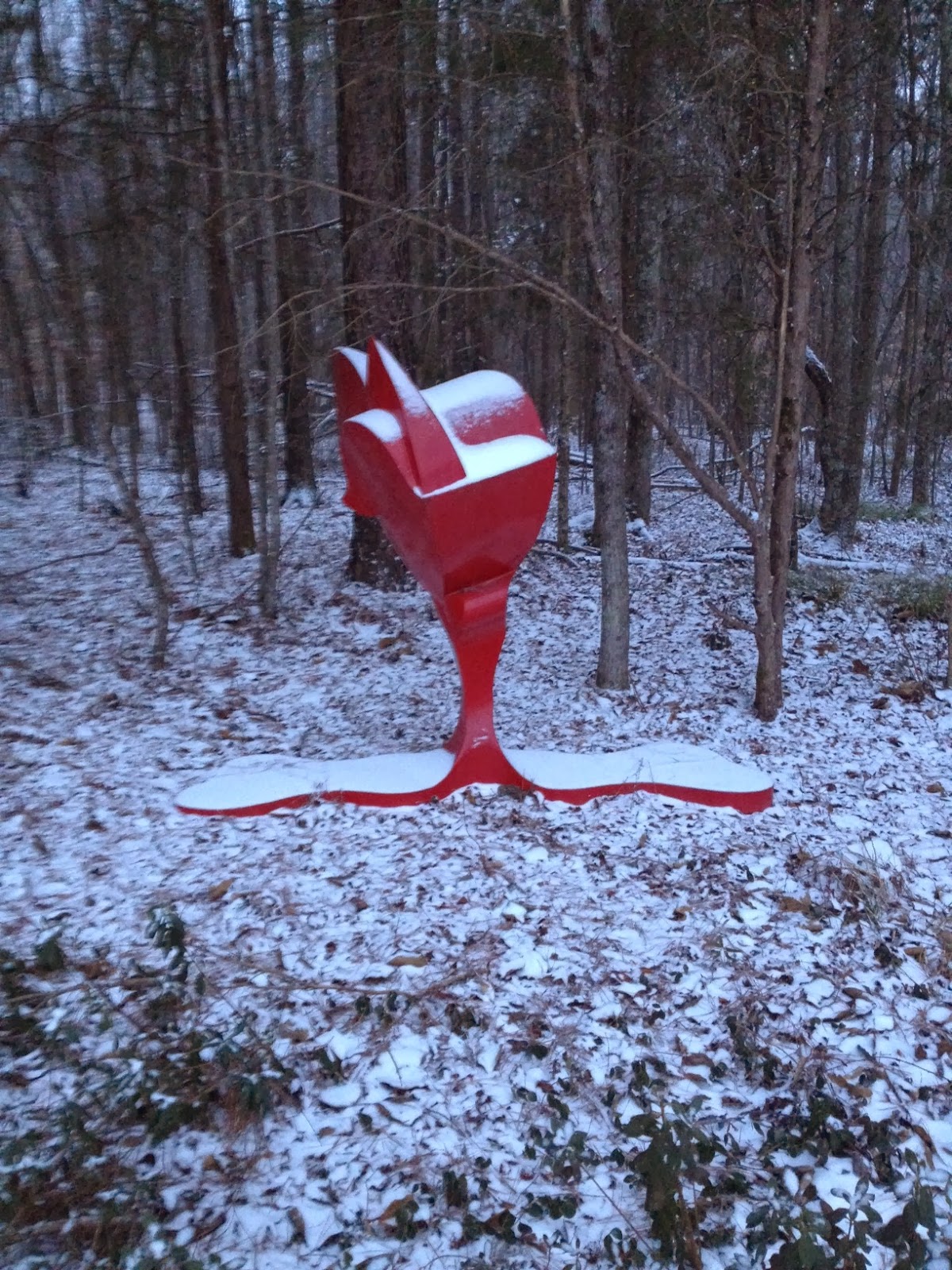 Last Tuesday, the tiniest little specks of flurries started falling when my 1:15 pm class was getting ready to start.  I tried to distract my students from the flakes and the possibility of what was to come but soon the school sent everyone text messages about closing school at 3:00 pm.  Snow was not accumulating at all at this point and while the teacher in me was pushing my students to work, the Southerner in me was thrilled to be heading home early to enjoy the chance of weather.

After a stop at Ingles (for hamburger meat, not milk or bread) everything started to change.  As I filled up with gas in the bitter cold I noticed the crazy guy in the Statue of Liberty costume who normally violently tries to draw attention to the local tax place across the street.  Instead of waving and jumping he looked around at the falling snow, tucked his sign under his arm and headed for the warmth of the storefront lobby.  That's pretty much when I knew that this storm was happening.

Once I was home the Plantation looked like the photo above.  I put on my warmest running clothes and enjoyed a scenic run in the snow.  The couple next door arrived at their driveway separately while this old idiot was running in the falling snow and I'm pretty sure they both laughed at me as they drove by. 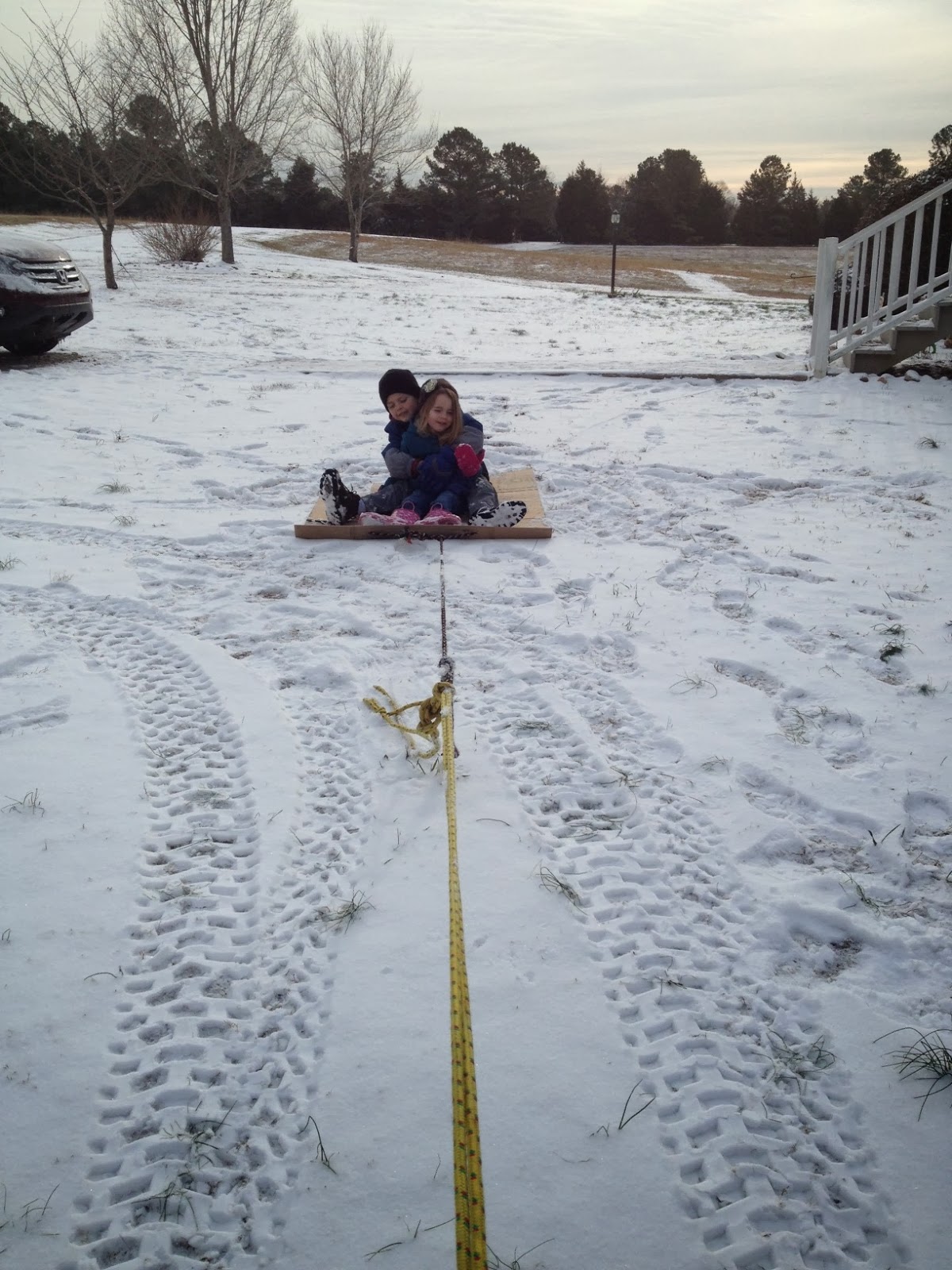 The next morning the snow had stopped but the bitter cold remained.  Schools were canceled and schedules cleared.  After my coffee the kids were ready to get outside.  I reached deep down in my heritage and put together an idea they would love.  G bundled them up tight and I hitched them to the four wheeler for some level ground sledding. 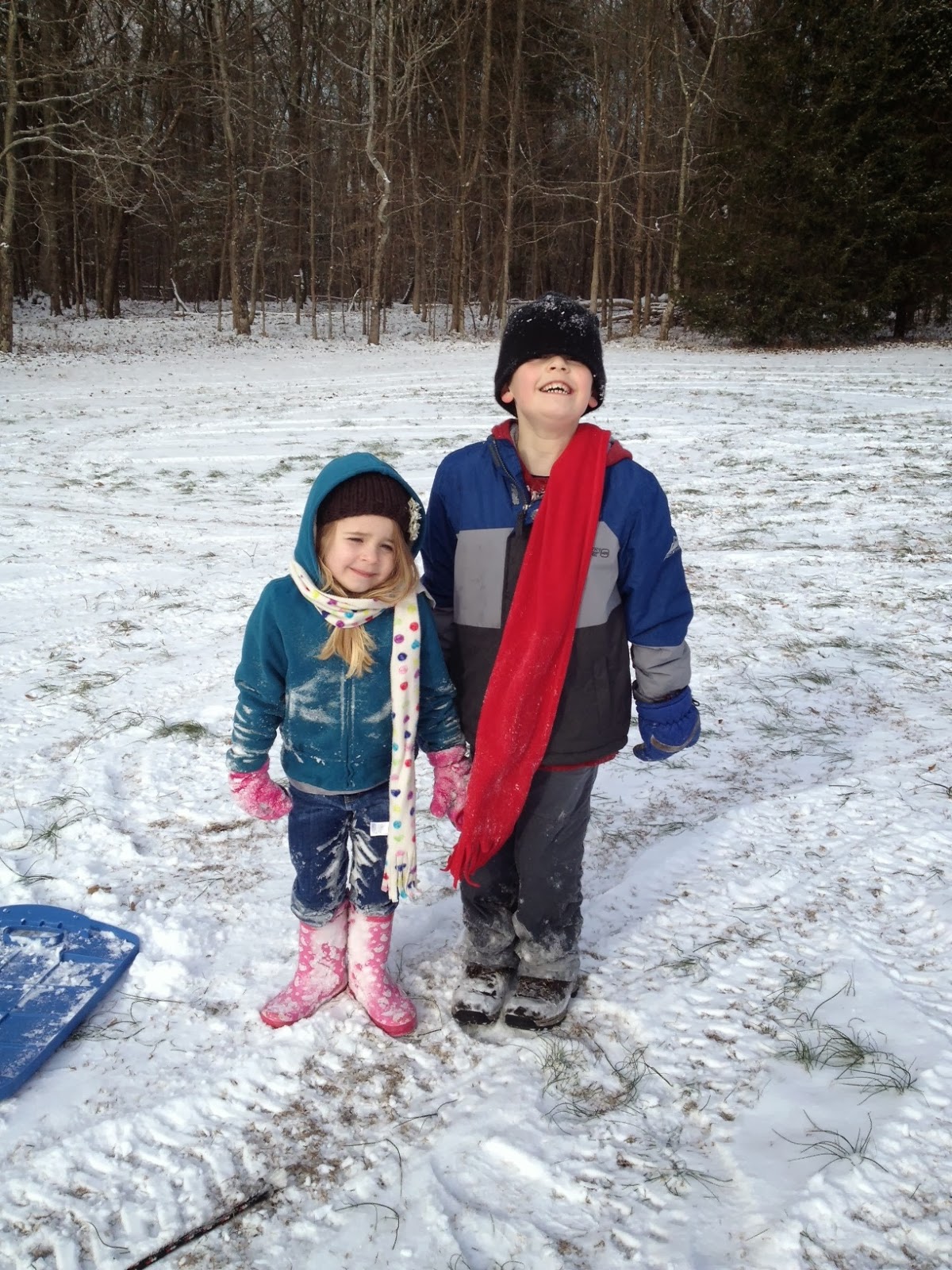 We were careful and safe and all that.  I stayed away from trees and things and made sure they had plenty of room to skid through the turns.  We churned up all the snow in the back yard and the kids stored some of it inside their boots and pants.  It was so cold, there wasn't much melting so their clothes stayed dry. 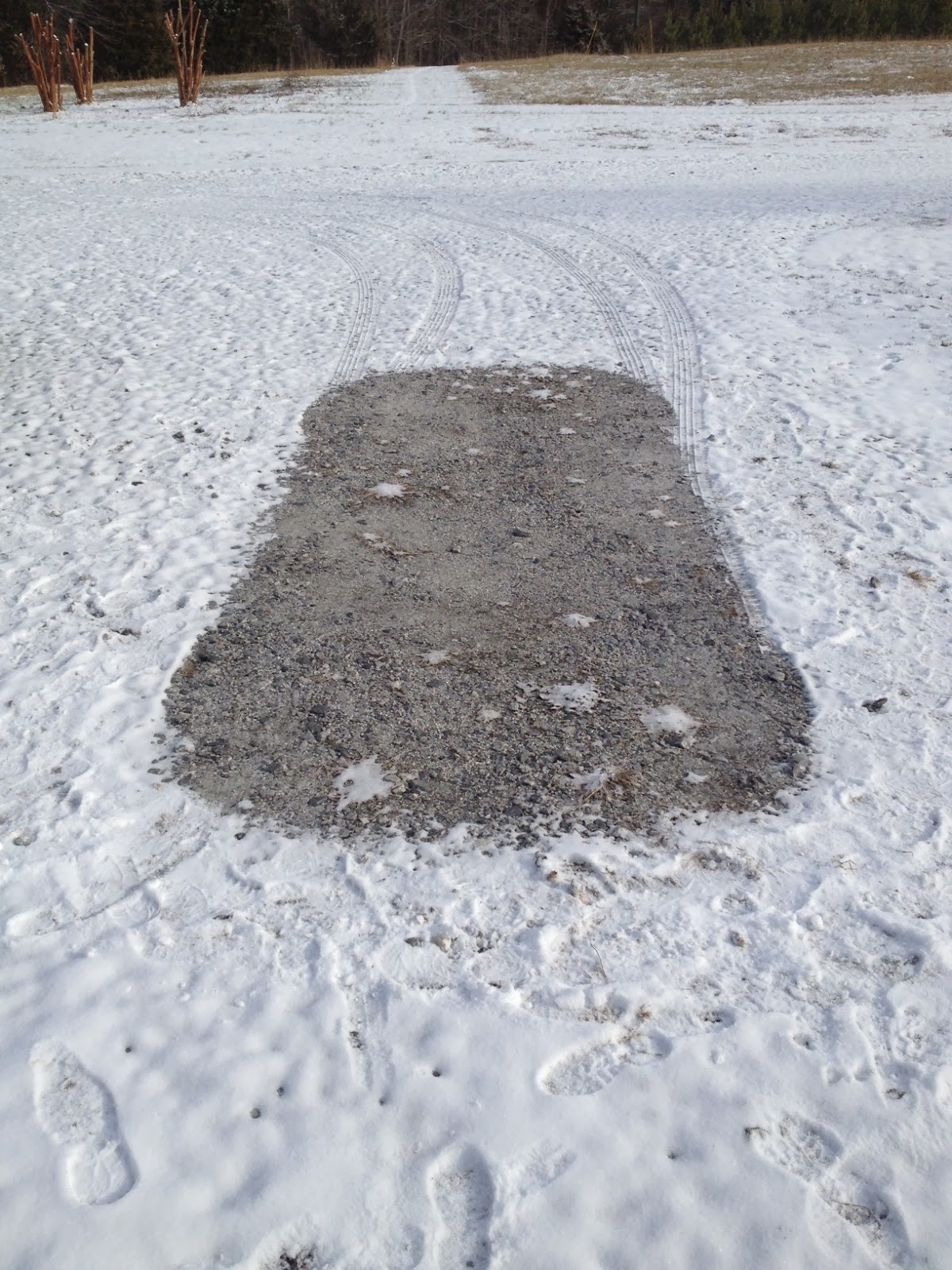 As soon as the fun started, G had to leave.  It seems that nurses have to report to work regardless of weather.  I guess we need the nurses there because crazy people pull others around in the snow on four wheelers, huh? 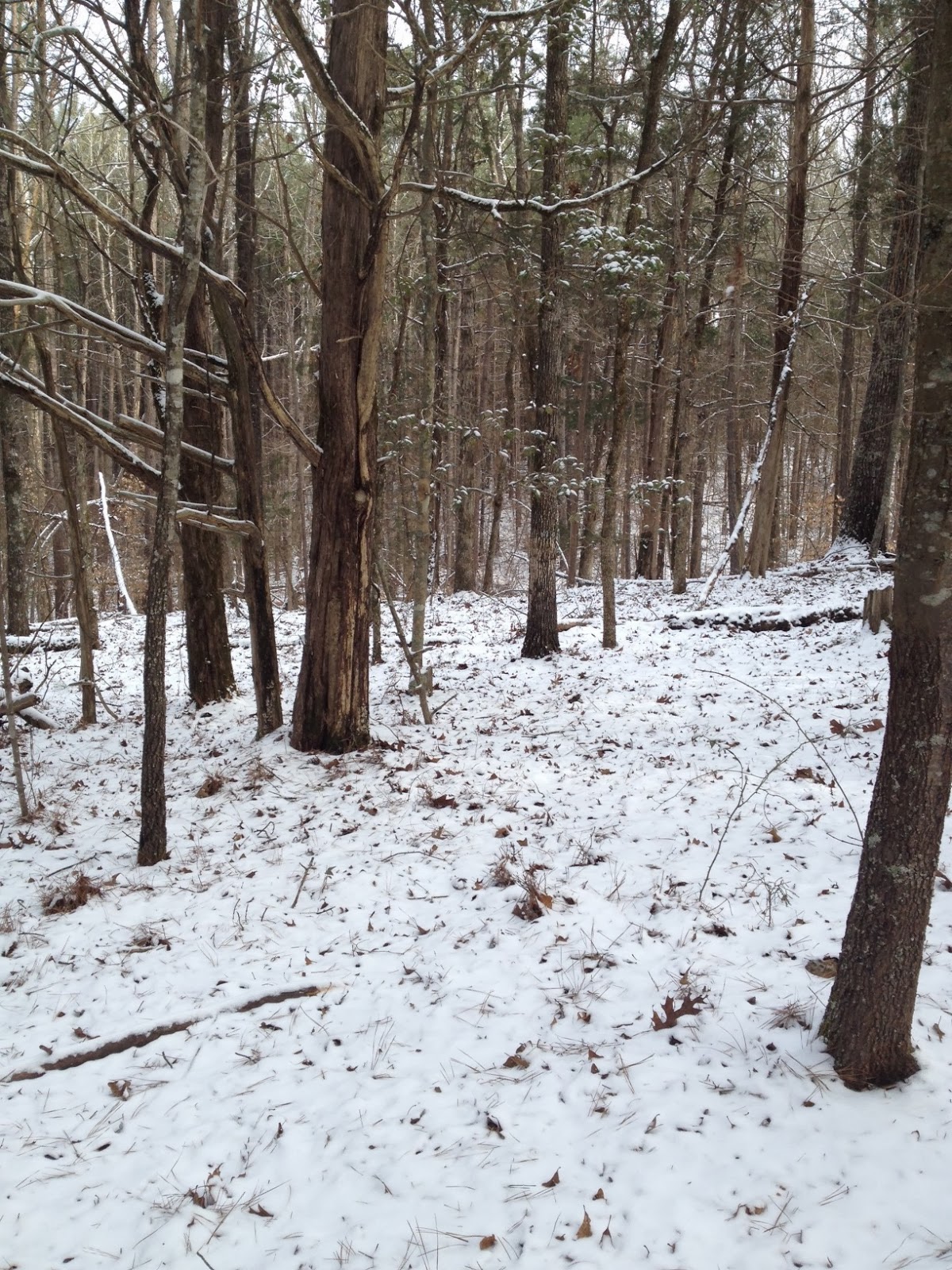 A couple of inches of snow makes everything more beautiful.  The kids were blown away with the redneck sledding and when they started to get cold we took a ride on the four wheeler where they were ecstatic about how pretty everything was. 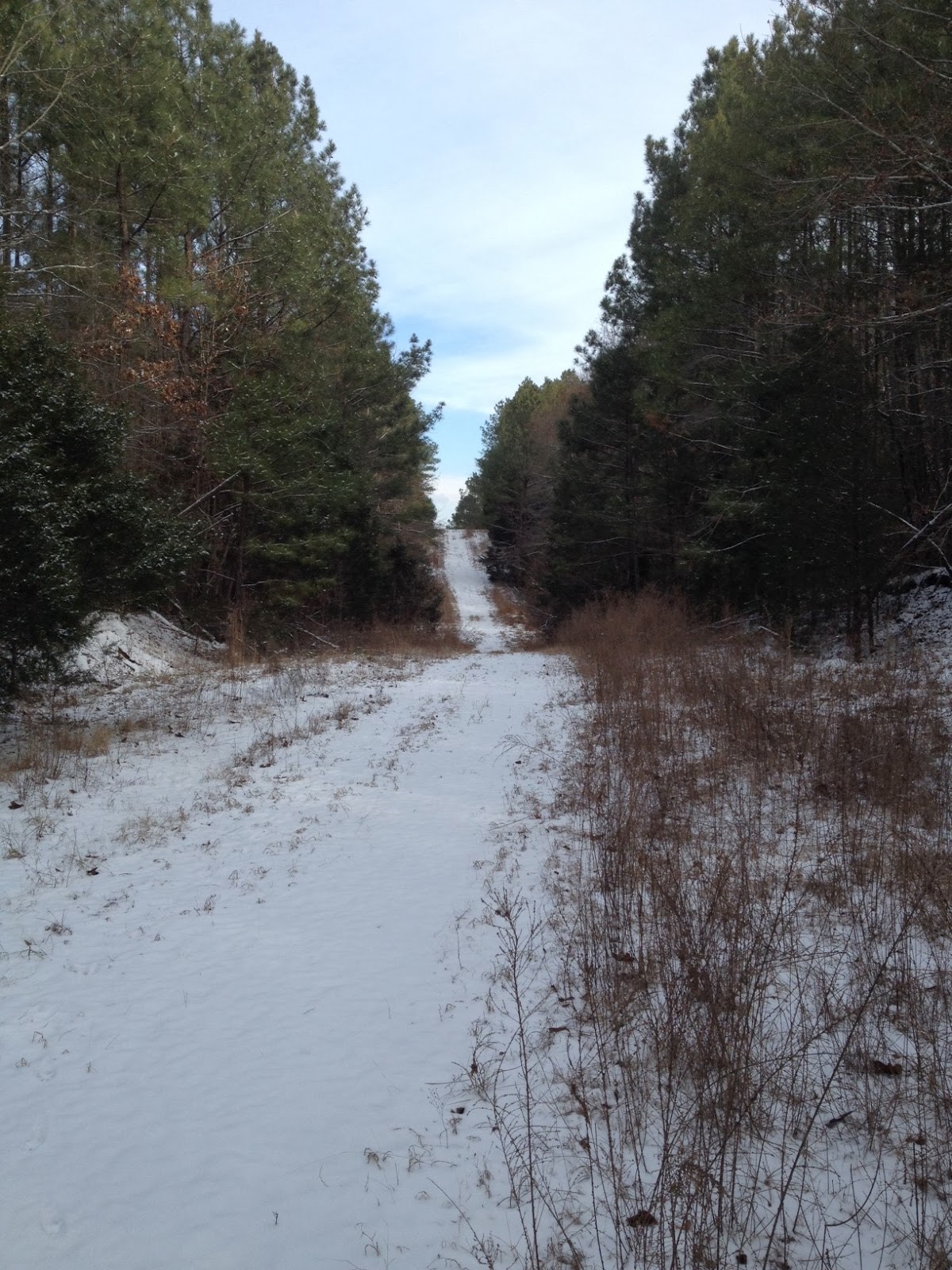 They were right, though.  Everything looked different and more beautiful than it did the day before.  The absolute joy of a southern snow. 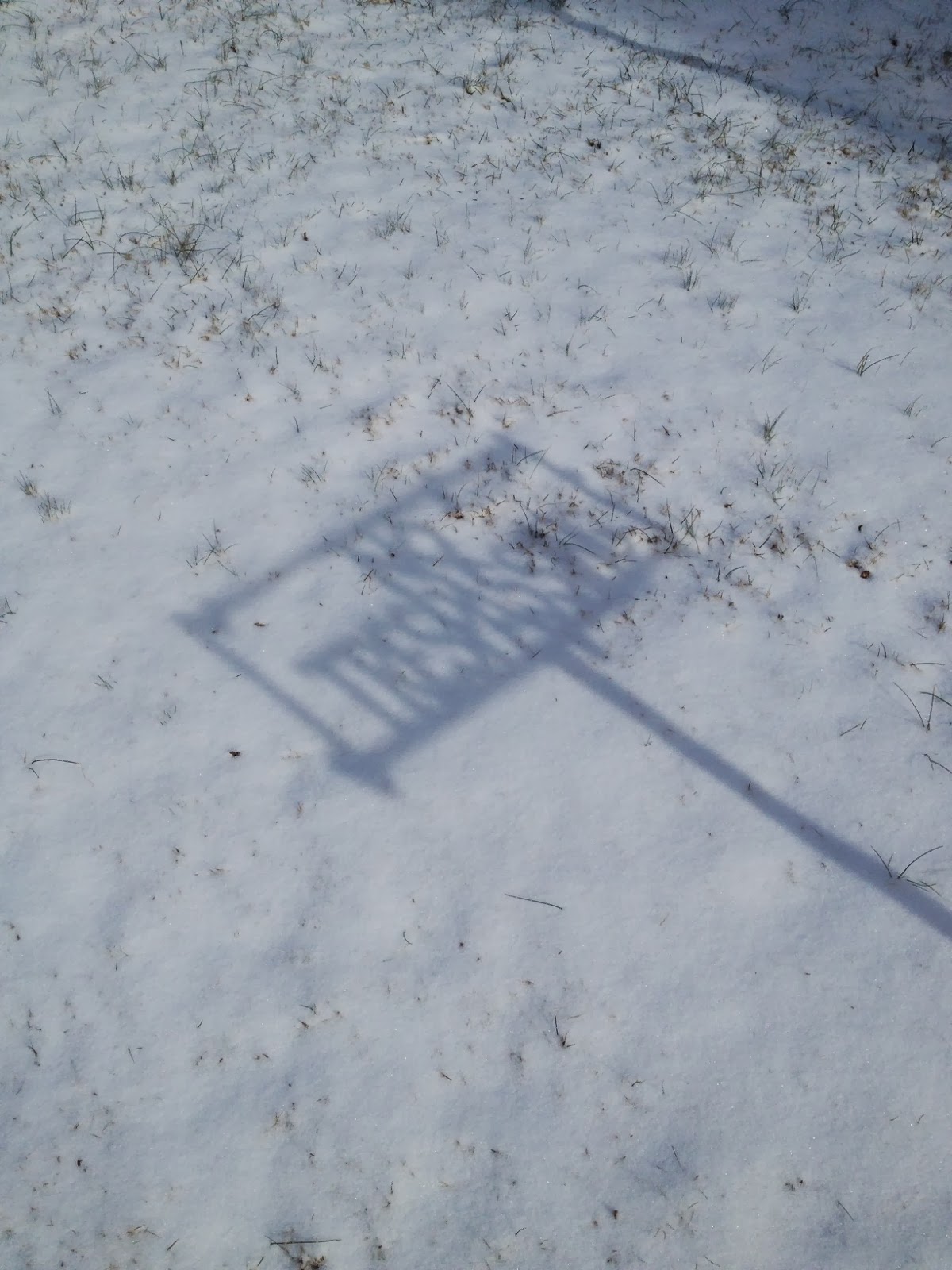 Even my cold and forbidding "no trespassing" sign looked nicer in the snow. 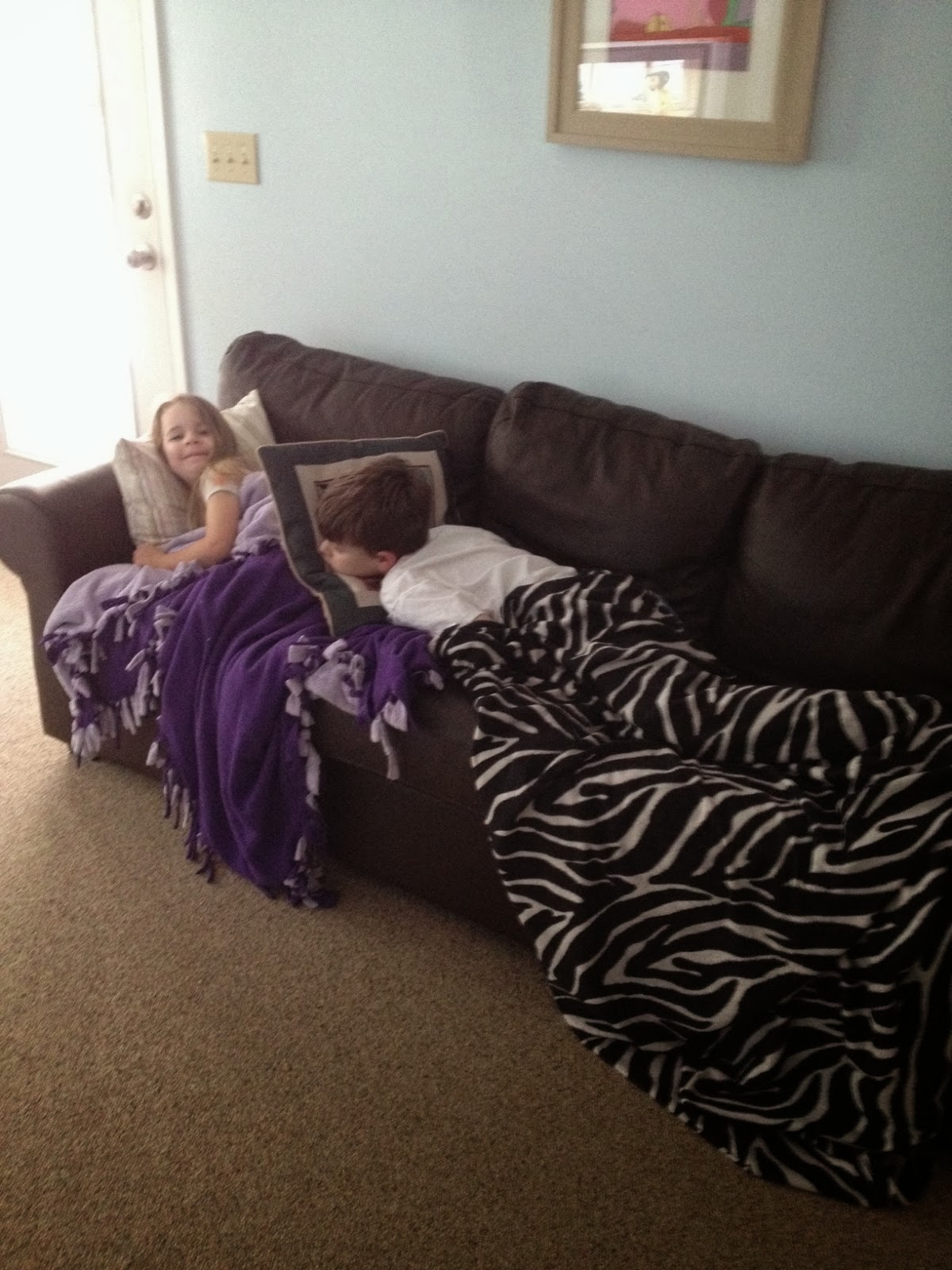 Soon we had to go inside to thaw out.  Clothes were changed, hot chocolate was served and "Coraline" was requested on the TV.  Blue and Violet were tired and they stayed almost completely still for the duration of the movie. 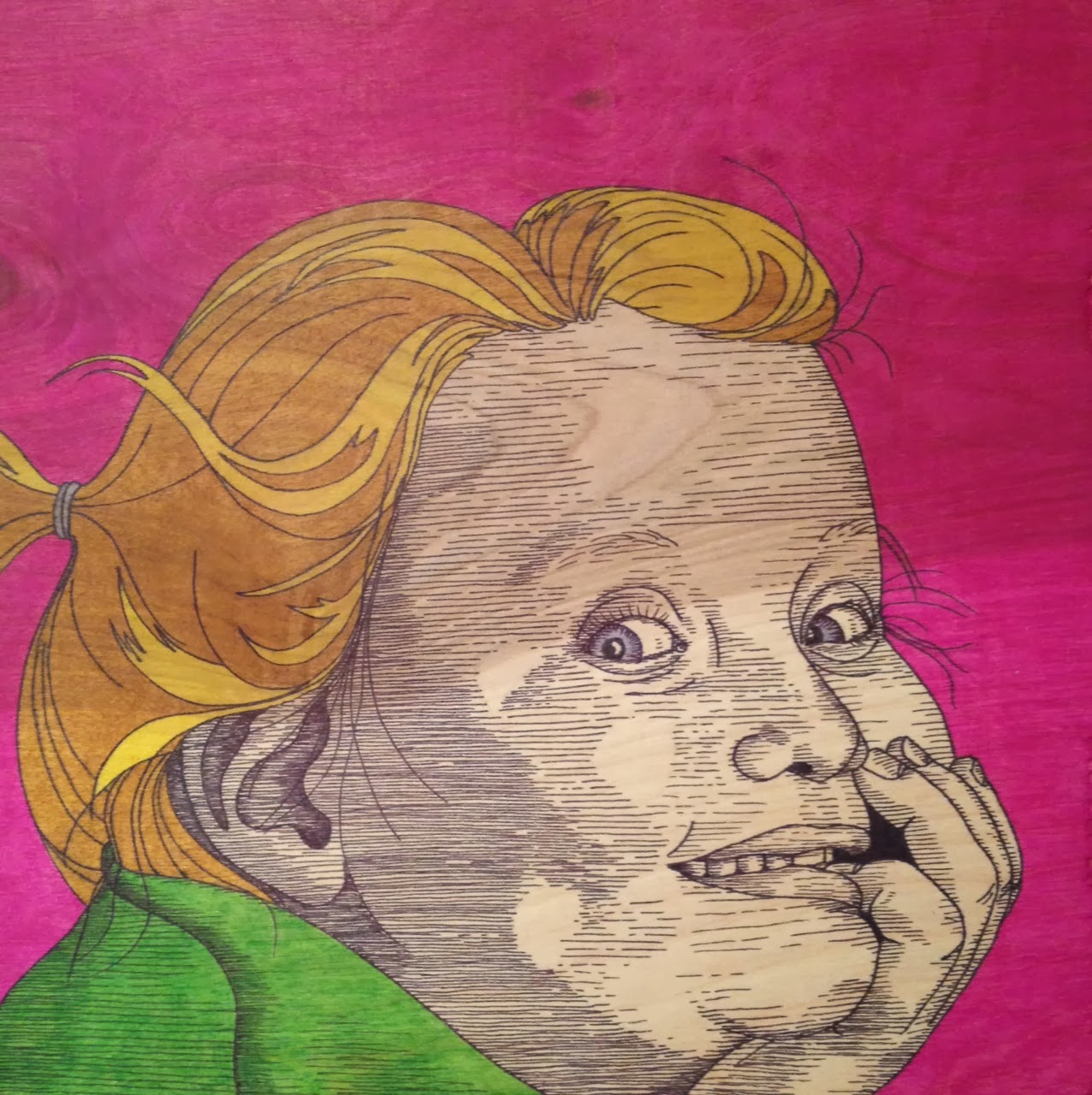 While they were entertained, I worked to finish a silly drawing of Honey Boo Boo. 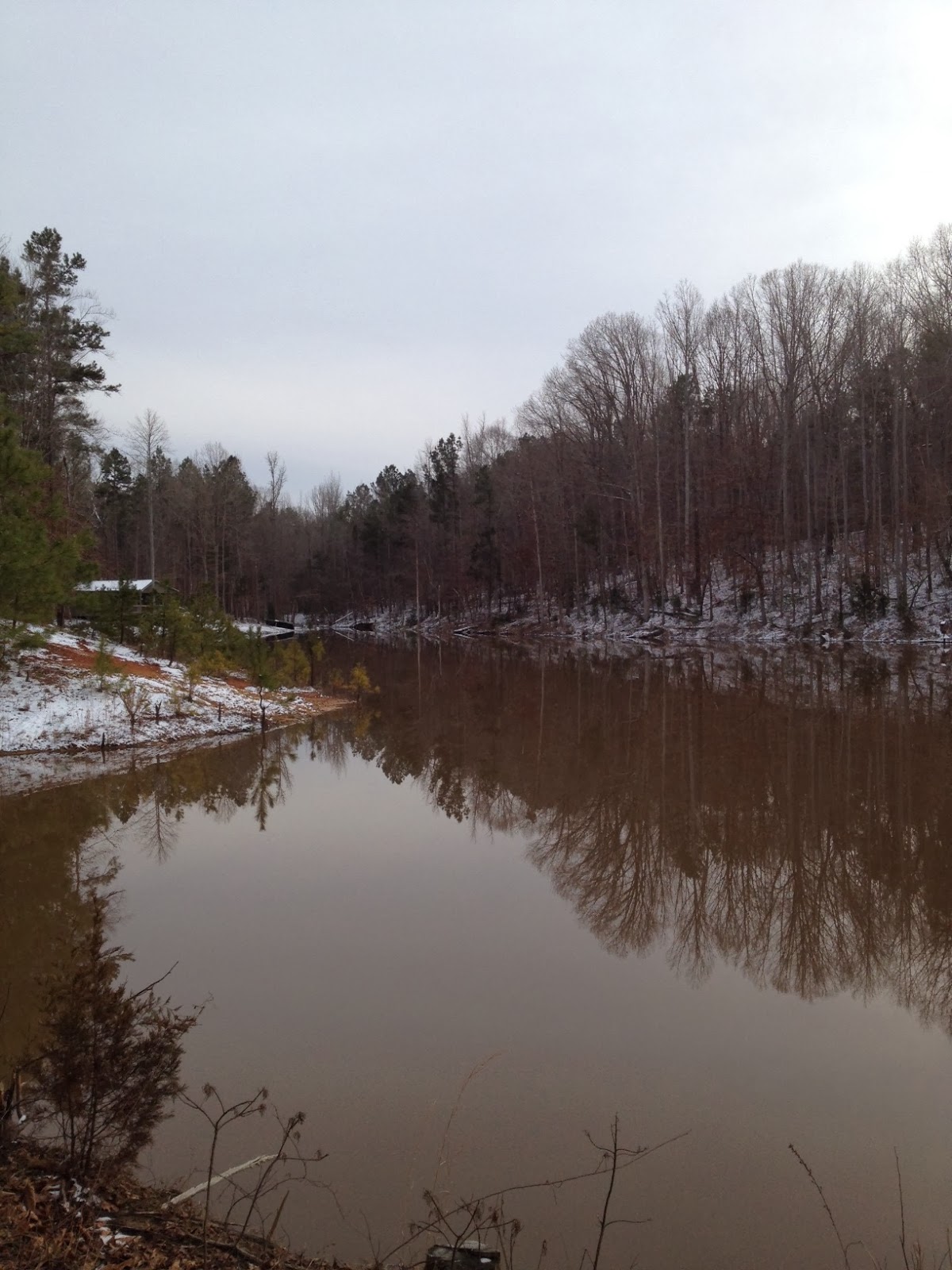 Later I got everyone back outside for a snow hike.  You have to enjoy the snow here while you can.  You never know when you'll see it again.


As soon as it starts to melt every single one of us starts checking that extended forecast to see if John is gonna give us another chance at a winter vacation.  G says next weekend is looking promising.
Posted by e-sketchbook at 1:59 PM No comments: