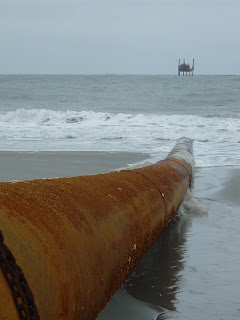 Euripides said, "Being so close to the sea will wash away all human ills."
Which begs the question, who the heck is Euripides?

Posted by e-sketchbook at 6:08 AM No comments: 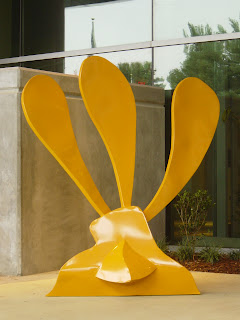 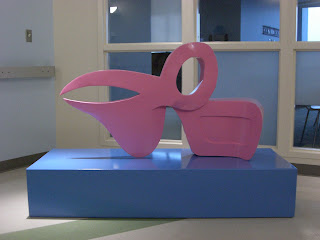 Posted by e-sketchbook at 6:37 AM No comments: 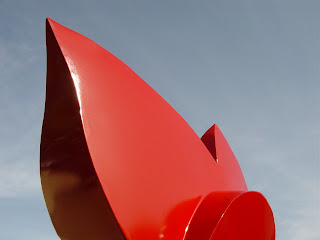 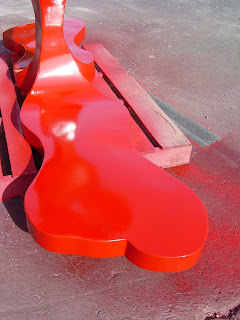 Posted by e-sketchbook at 8:01 PM No comments:

I'll be the first to admit that in the past I have been skeptical of abstract artists. As a student I remember listening to artists give slide lectures about their abstract or non-representational artwork and not believing a single word they spoke. I doubted their motives for creating art. I doubted their abilities and skills. The more they talked, they more I became convinced that this person was just making stuff up. I imagined that they would stand in front of a canvas, throw something on it, then make up a wild story about how the blob of paint related to starving kids in third world countries.
Part of this skepticism came from my own ignorance and lack of experience. But part of it came from the artist's inability to articulate exactly what was happening in their creative process.
Eventually I realized that I too was doomed to become one of those abstract artists. Once I accepted this fact, I wanted to make sure that I became a better ambassador for abstract art to my viewers. I just didn't want to be that inarticulate, scatterbrained artist. As a result I have payed careful attention to my own creative process over the years. I realize that I'm only in the beginning stages of understanding even small portions of that process and that there are some areas I may never fully comprehend, but I am actively pursing that understanding.
One topic has called attention to itself repeatedly over the last few months and as luck would have it, this topic may be one of the most difficult to understand. Just so you know, I do not bring it up here because I feel that I am prepared to be articulate about it, but rather as a means of recording my thoughts and research about it so far in the hopes that one day I can be a little more knowledgeable and a little more convincing.
The topic is intuition and the role it plays in the creative process.
I've mentioned my goofy decision to make 2007 the year of the drawing. As I've worked this year to make one new drawing each week I've noted the differences in the process of creating each new drawing. Some weeks I labor over the ideas, imagery, and composition and make logical decisions that impact the finished product. These drawings end up a sum of some of the most basic uses of the elements and principles of design added to images developed from personal narratives that have been manipulated to incorporate multiple layers of interpretation. These two things are then combined with the medium and what I've learned about the physical process of applying the ink to the paper. There are weeks that this process takes a little more than 7 days.
But there are also times like last week when I sit down to draw and have no idea what I want to do. I turned on my lights and sat down...not because I wanted to...but because I had to appease myself. I figured that if I went and sat there with no ideas for 10 minutes or so then it would be excusable to go watch TV with the family instead. That way, I could say that I tried. That is what I expected to happen, it's just not what happened. So I turned on the lights and sat down and stared at the little white piece of bristol paper. I had no ideas and no images. I picked up the pencil (because that's just what you do) and without consciously thinking about what I wanted to draw or what I wanted to communicate, I put the pencil to the paper and began drawing. At first it was just a line, then a curved line, then a shape. Soon it became an image with a story and a setting and a meaning. A few hours later it was a finished drawing and I had to stop and ask myself what just happened. Without any preconceived ideas some part of me intuitively knew what to draw and how to draw it. Thinking back, I could see that many of my drawings this year have come about in a similar manner. At times I have just "known" that this color goes there or that this particular image is the right one to use.
This realization presents a problem for me though. I'm a teacher. Every week I explain to my students that they cant just go through my class doing whatever they want just because they want to. Now it's true that this is a class that focuses on the effective use of the elements and principles of design, but still. I tell them that there are reasons for everything. I tell them to assess the design and size up the situation. Once they begin to analyze the design, locate the needs of the design, and identify the strengths and weaknesses, only then can they begin to use the elements and principles to solve those problems and make their design more effective. The patterns they choose relate to the types of shapes and or forms they have. Color is chosen to unify a chaotic design or to emphasize areas of a design they want the viewer to focus more attention on. They are taught to do everything for a reason and to be able to articulate that reason on demand.
While their teacher sits in front of his finished drawing that he cant explain. So what gives?

Cognitive psychologist Gary Klein has researched just this sort of thing. Just not in art. Instead, Klein spent his time studying firemen, EMTs, and other emergency responders. It is here that decisions matter. In seconds theses men and women are making decisions that essentially will either cause people to live or die. In issue 38 of Fast Company Magazine (www.fastcompany.com/magazine/38/klein) Bill Breen discusses Klein's research in this area. Breen describes a situation where an emergency responder ignores the emergency-medical procedure and moves a victim before checking for other injuries. This split second decision is made to save time as the victim is quickly losing blood and is in danger of bleeding to death. The time saved by this rejection of procedure allows the crew to get the victim to the ER in exactly 10 minutes and ultimately saves his life. When asked to explain his decision making process, the rescue worker indicated that he did not make a logical decision, he only drew from his experience. He seemed to arrive at his life saving move as the result of intuition. He just sort of knew what to do.
Another example of Klein's research is described by Breen as firemen responded to a fire alarm. The team of firemen arrive and enter the building. They begin to battle the fire but the fire seems to ignore them. Soon "the commander is gripped by an uneasy feeling. His intuition tells him they should get out of the house." He gets his crew out and no sooner than they exit the building, the floor they were standing on gives way to a raging basement fire. Another moment inside the house and they would not have escaped.
As Klein questioned the commander about his intuitive decision he made some discoveries. As the firefighters hosed what they thought to be a small kitchen fire, the fire did not respond in the expected manner. It did not decrease as they doused it with the hose. It was also much hotter inside the house than it would have normally been for a small kitchen fire. The scenario did not match up with any of the commander's previous fire experiences, so he sensed danger and got everyone out. According to Klein, firefighters develop a library of fire experiences over time. Particular fires fit into different categories in the mind. In the heat of the moment their brains search those mental files rapidly to find the fire that matches the one they are facing. When the correct file is found, they instantly know how to deal with that fire based on previous experience.
With this in mind, Klein suggests that what we call intuition is actually more of a split second decision making process based on our previous experiences. The human mind is able to work at such a fast pace that there is no need for the firemen to sit down with a legal pad and list the pros and cons of each situation before making a logical choice . Breen writes that the commander in the story above did not have extra sensory perception, but instead he had sensory perception.
This article suggests that humans are able to perceive a situation unconsciously and almost simultaneously simulate different solutions from previous experiences. This happens so fast that we do not recognize it as a decision making process. We may not realize that we are in fact, making logical and reasonable decisions. The thought process is over before we realize it began and we are left sitting in front of a finished drawing wondering if we've really been practicing what we've been preaching.
So what may have really happened that night at the drawing table? Klein may indicate that I sat there with my blank page and subconsciously processed several different approaches to beginning a new drawing. My mind instinctively pulled out the file of unused images and began to select an interesting image. Another file was opened that allowed me assess, analyze and synthesize it's design qualities. When I realized what the design needed another file was opened and I was able to select images and ideas that met those needs in terms of design and concept until the drawing was complete.
If this is true, then I can reconcile my actions with my teaching. The firefighters and EMTs had to go through the training and had to learn the correct procedures in order to begin gaining a knowledge base. After many years of on the job experience and learning about real world applications of those procedures that knowledge base is expanded until eventually they no longer have to rely on the books or the training manuals. The teaching and training had to come first and it is just as important as everyone told them it would be. They may not realize why they are making the split second decisions and may not take the time to understand exactly what goes into that process and they may mistakenly think that they are just making gut decisions or doing what they felt was right, but actually they are following Klein's model.
This takes the magic out of the word intuition, but I admit, it does make sense. And it also may follow Paul Klee's explanation of the circular life of the artist.
Posted by e-sketchbook at 4:32 AM No comments: 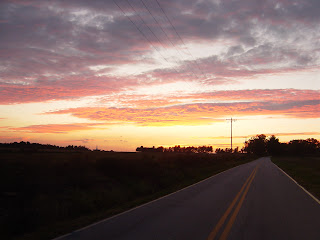 Sometimes all you need to do is open your eyes and see what is right in front of you.
...and then stop and photograph it.
We need beauty.
Posted by e-sketchbook at 5:57 AM No comments: 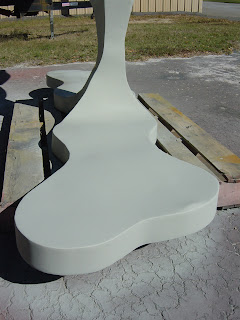 Posted by e-sketchbook at 7:07 PM No comments: 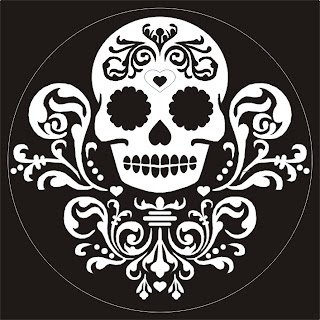 Posted by e-sketchbook at 4:10 AM No comments: