the next big thing 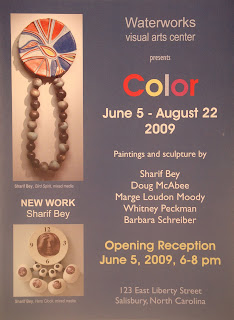 Posted by e-sketchbook at 1:34 PM No comments: 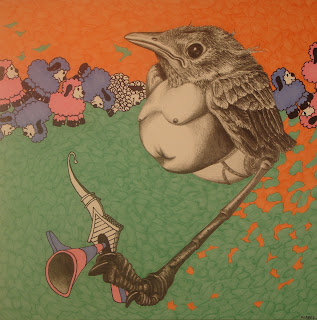 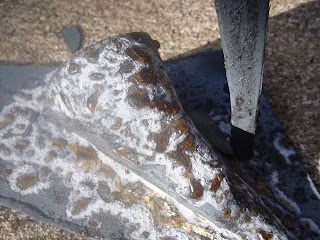 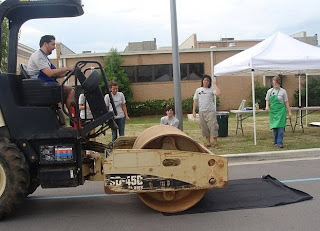 I had to put this one up too. I love the expression on Josh's face.

A few Saturdays ago Josh Drews held the Printmaking Extravaganza at Spring Valley High School in Columbia. He invited schools and artists to produce linoleum or wood block prints and come to the Extravaganza where he provided paper and a steamroller. That's right...a steamroller.
Normally a printer would cut a block and stand inside a little room and roll the block and paper through a little press and no one would get excited about that. But Josh likes to do things the fun way and the fun way almost always involves a steamroller.

The artists inked the blocks and covered them with paper... 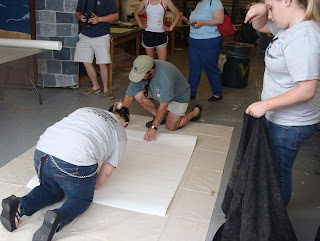 The blocks were placed in front of the steamroller... 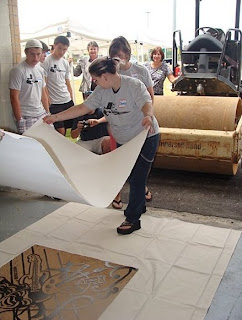 Then Josh was released from his chains and he wildly climbed up on the steamroller... 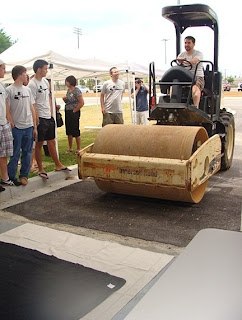 After he popped a few wheelies Mr. Drews steamrolled a couple of compact cars to warm up and then he was ready to go... 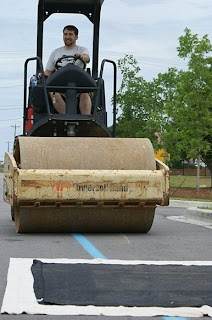 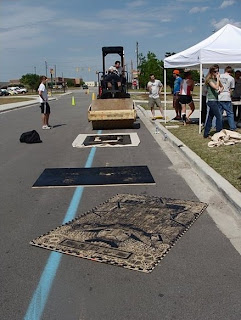 This poor girl was not able to get out of the way in time... 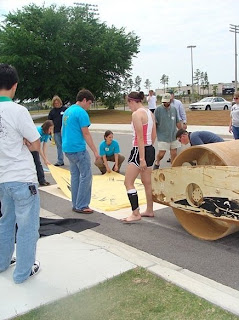 But after a quick cleaning of the roller, Josh was back in business... 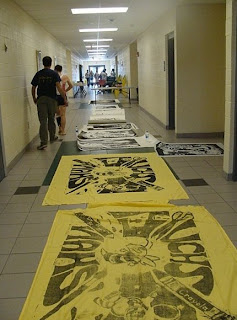 He also may have clipped that telephone utility box at some point... 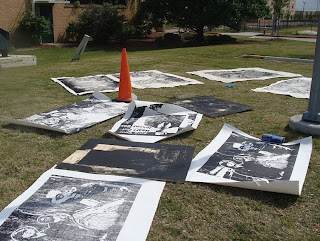 Seriously, Josh was safe and kind and no one was steamrolled during the process. Some very good quality prints were created. I was able to take part in the Extravaganza as an absentee artist. Molly and I collaborated on a design and she was able to attend the event and handle all the manual labor. Neither of us had ever collaborated with anyone before but the design and the process turned out very well.
The important thing to note is that Josh is teaching this kind of creative approach to art to the students in our state. He's not just giving them assignments, he's creating events that bring different people together and allow his students to have experiences beyond the classroom. It's this kind of approach to teaching that won Josh the title of SC Art Educator of the Year last year.
And now I leave you with a couple of prints from the Extravaganza. This one by Sandy Singletary...

And this, the Molly and Doug collaboration... 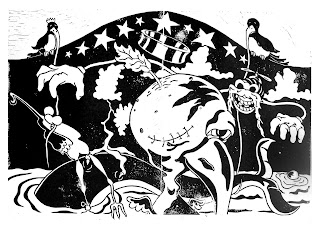 Posted by e-sketchbook at 5:41 PM No comments: 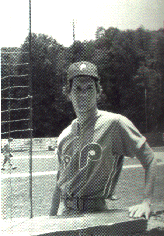 That's Ryne Sandberg in his Spartanburg Phillies uniform in 1979. The honorable Mr. Sandberg just happens to be the greatest second baseman to ever play the game of baseball - for those of you who were wondering. It's a bad image of what appears to be an old newspaper photo and I know you're not going to complain about it because it took me several months to find it.
Ryno was my favorite baseball player as I was growing up. Wanting to be just like him, I played second base and wore his number 23 on every jersey I played in. Eventually I realized I would not be a Hall of Famer like him because apparently you have to actually be good to play past little league and I, sadly, was not.
Sandberg was signed with Philadelphia and played single A ball here in lovely Spartanburg for a year before moving on and eventually ending up with the Chicago Cubs. But when he was a mere ten minutes from my house I was only seven and had no idea who he was. So instead of telling a riveting story about how he and I played catch after a game in the Beacon parking lot, I have to settle for sharing that blurry and pixelated photo.

Sorry this has nothing to do with art. Just consider this your liberal arts education for the week.
Posted by e-sketchbook at 4:53 PM 1 comment: 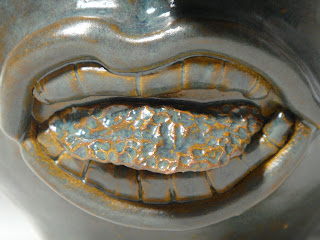 After the pottery sale at the Green’s we meandered over to The Garden of the Gods – also known as Walhalla, SC. That weekend was also the Pickens Oconee Pendleton (POP) Open Studios and one of my college roommates was a featured artist. Stan DuBose is king of the Art Education world in the Upstate area and seriously holds some sort of really high position with the National Art Education folks. Among the tons of things he manages to have time to do, he runs Bearswamp Pottery out of his home studio with his vicious, biting dog by his side. I’m not kidding about the vicious part. Nor the biting part. Anytime people come by his house, he has to make arrangements for Pablo the dog to be dog-sat by his mom down the road. This is the only inherently evil dog I’ve ever met. 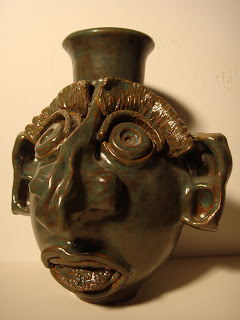 So with Pablo’s teeth at a safe distance the studio was open for visitors and shoppers and Stan was ready. I’ve been to his studio a couple of times in the last few years and I’ve never seen it so clean and neat. It was like a little store in there and you could barely see his throwing wheel and kiln for all the cool, shiny things for sale. It’s worth the trip to Stan’s simply for the view. He built this house a while back up on top of a hill on his family’s land. The house and studio face a gorgeous mountain view with several pastures and trees and animals in the foreground. I forgot to take my camera with us so you’ll just need to imagine the view I’m describing. We had our 2 ½ year old son with us and after having a couple of visions of a bull running through a china shop, we spent much of our time outside on the front porch which not only showcased the view but also featured Stan’s awesome landscaping. With the mulch, trees, flowers, and water features he’s built something just shy of a children’s museum out there. Little Blue chased lizards and bumble bees and jumped in the plants while his mom spent lots of money on the even cooler things inside. 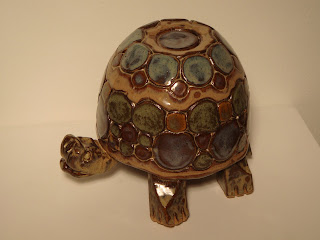 Stan’s work is best described as clean. He takes craftsmanship to the absolute highest level in all his work and the results are amazing. His work is so well done you can spend some time looking over his damaged rack and never find the flaw that failed to pass his inspection. There were many utilitarian objects for sale including kitchen tools, dishes, fridge magnets, clocks, and containers with intricate carvings on the exteriors. There were wall hanging pieces with designs and carvings and several small framed ink drawings that featured nature abstractions. And while all these things are good, he seems to really excel in creating his more sculptural pieces. Among those are some face jugs that buck the traditional style and approach and feature some very bold and very three-dimensional facial features. He also produced a series of patchwork turtles created out of small discs of clay pushed together around a form to create the dome of the turtle shell. These varied in color combinations and had some expressive heads and legs attached to them. By far, though, my favorite things were the birds. His birds are carved out of solid clay just around life size or slightly smaller and have realistic bird legs perched on an assortment of antique found objects. I can’t even begin to describe the amount of detailed carving he does with each of these birds. Every single feather has been etched out in the clay surface revealing patterns and textures that almost make you forget these birds are not real. 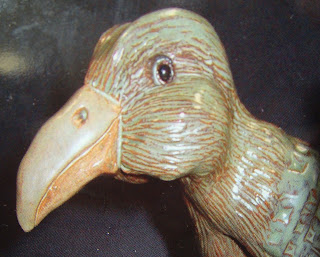 (terrible photo of a postcard)

By the way, the name Bearswamp Pottery comes from the wonderfully named road that Stan lives on – East Bearswamp Road. I know you were wondering.
Posted by e-sketchbook at 5:58 PM No comments: 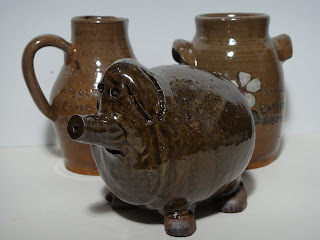 Last Saturday folk art potters Billy and Linda Green had a sale of their recent work and my wife, my son, and I were lucky enough to attend. The Greens only live about 20 minutes from my home but I had never been to one of their firings or sales. They live in an area of Spartanburg that was a hotbed of ceramic activity during the 1800’s and up until about 1940. I was told that Billy Green picked up pottery from his neighbor Billy Henson years ago and recently Linda picked up the habit from her husband.

We didn’t know exactly what to expect when we arrived. We had been told that it would be a lottery style sale where everyone would be allowed to draw a number at 10:00am. The people with the lowest numbers get the first picks of the work and they continue through all the numbers until everyone has had a chance to choose. When all numbers have been called it turns into a free-for-all and everyone is allowed to choose among the pottery that is left. Having been to many art related events I half expected the scene to into Wal-Mart a couple of weeks before Christmas complete with pushing and shoving and swearing.

Instead we found the friendliest group of people in the state. As we arrived and walked directly into the Green’s backyard, I felt completely at home. Behind their house there were several outbuildings and a few tables set up and loaded down with pots. People were milling around and chatting while making mental lists of their favorite pieces. There were plows and tractors and chickens and it was wonderful. Complete strangers came up and talked with us as if they’d known us all our lives as everyone came together over this shared interest. My friend Paul was there from Columbia and after we let the kids check out the roosters he introduced me to Linda and she told me a little about some of her favorite pieces and her interests in making pottery. A little while later Billy and I talked about dogs while we waited for the sale to begin. A person would be hard pressed to find any pair of people nicer and more genuine than Billy and Linda.

My luck had me draw a number in the 50’s and when Linda asked who had the highest number I found out that only one person was lucky enough to draw a higher number than mine. And in a very classy move, Linda awarded the man with the highest number a very cool pot with a large flower glazed on it. Missed it by one. When the selecting began it moved quickly and everyone seemed thoroughly pleased with their choices. This was likely due to the fact that there were so many quality pieces to choose from. Most of the work was by Linda and in addition to the regular jugs and pitchers she had several more sculptural pieces she had turned into elephants, people, and pigs. Of course there were face jugs too and while those carried on the tradition of the face jug, these had their own style and individual charm. Very much like Billy and Linda themselves.
Posted by e-sketchbook at 5:43 PM 7 comments: