on the first day of christmas... 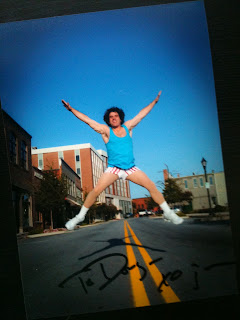 ...I was gifted an autographed photo of Richard Simmons *

*Not the actual Richard Simmons.

The actor portraying Richard Simmons in the photo is none other than jon holloway, famous photographer & infamous photography professor.  jon is so dedicated to getting into character that he spent an entire year growing out his "haystack" hairstyle so he could be Richard Simmons for Halloween.  And before you ask, yes, he's wearing pantyhose.
Posted by e-sketchbook at 1:27 PM

I didn't realize that was the reason for the haystack hair. Lovely photo.