2011 Reindeer Run or Too Cold For This 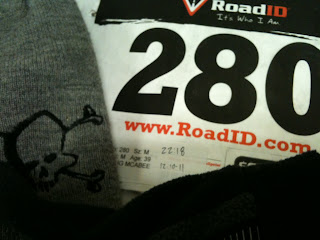 Brother Daniel and I signed up for the 2011 Laurens YMCA Reindeer Run mostly because I live in Laurens now. I drove past a sign one day and saw the entry form in the paper. The only thing left to do was to convince my brother to get up early on a Saturday and drive 30 minutes to my house so we could go run 3.1 miles....just 2 weeks after we ran on Thanksgiving day.
He fell for it and off we went. At race time the temperatures were just above freezing. It's tough to know what to wear for a good run. Even at mid 30's temperatures you're likely to sweat a lot so the tendency is to dress light. Then you find yourself suddenly wet and cold when the running is done.
But we'd both rather run in the cold than in the soupy summer air. 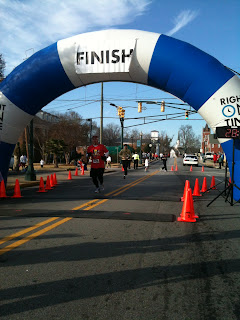 That's brother Daniel finishing with his fastest time yet. I hit my best time too and was lucky enough that there were very few dudes my age running ahead of me so I got second place in my age range.
The cold also affected the free post race bananas. We had trouble peeling the frozen husks and eating the banana was like chewing ice cream. I was afraid Daniel would drop his and break his toe.
Now we're trying to talk each other into the Charleston Bridge Run in the spring.
Posted by e-sketchbook at 3:21 PM

You really live in Laurens? I didn't know that. My old studio mate, Stephen Crotts, is from Laurens, and I'm there around once or twice a year visiting with his family.
Congratulations on your run. I'm a little jealous. I want to run but I'm afraid it would hurt my knees. Frozen bananas are good if they're dipped in chocolate.

You should definitely do the bridge run.