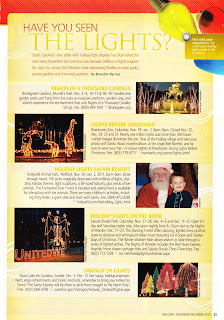 Here's one I forgot. Last November a lady at church gave us a page out of her AAA Magazine and told us she thought we might want it. I stared at the page trying to figure out why I'd want to know about regional holiday lights options. Then I noted the delightfully handsome chap perched on Santa's lap.
That's right, our boy Blue became a spokes-face for Hollywild Animal Park's seasonal attractions. Last year we took the boy to Hollywild for the drive through light display. It was memorable for two reasons.
Reason one: Hollywild has a portion of the drive-through display that goes through the fenced in area where bread hungry wild animals roam free. The idea is that you will buy bread and feed it to the animals out your window. You get cow saliva on your hands and the other large animals brush up against your car and try to eat your windshield wiper blades. You are instructed to stay INSIDE your car for obvious reasons. No one wants to be trampled or slashed or eaten by bulls, ostriches, or bison. About midway through this part is when I was forced to get out of the car, unstrap Blue, and stand with him beside the truck while emptied his bladder in front of God, festive families, and overly curious animals. The animals concerned me most. They seemed sure Blue had some bread for them and I barely made it back into the truck before the huge bison or buffalo or whatever he was....was right on me.
Reason two: In a new area they had a little Christmas village set up. There were more animals for petting and foods for buying. And there was Santa. That night Blue was one of the first kids to seek Santa's lap out and no sooner had he plopped down on St. Nick's sleigh than some ninja photographer appeared and snapped a few photos. We expected to get the sales pitch about how we could own one of those photos for a low price but when he came over he only asked for our permission to use the image for promotions.
With a smile that adorable it's easy to see why he'd make the highlight reel. It also makes it easier to forgive him for almost getting me trampled by wild animals.
Posted by e-sketchbook at 7:05 PM

Emu - not ostriches. Dylan wanted me to let you know. You can find us in the Summery-Summer time (unofficially) heading up the Safari Bus Rides.

Dylan, are you sure there's not an ostrich? I guess from the neck up they look similar, but I thought I saw those giant claws coming at me.

Brooke....we miss laughing with you and Mike. Hope everyone is well and having fun.

Yep, only emu. They are like ostriches, but not. - Dylan. (They remind us of the Skeksis from the Dark Crystal movie - very creepy - Brooke)

We miss y'all too and will be thinking of you fondly when we are at the OCMS/John Prine show 2/24 :-)