swatches - past, present and future

Back in the day we used to wear these things on our wrists called watches.  After we graduated from the sundial, the mechanical clock was how we told time.  Having a small, portable version on your arm was pretty dang convenient.  I'm being a little sarcastic because technology has moved us to an era where the younger generations can't imagine the inconvenience of not having a digital clock face on the small computer screen in their pocket.  More recently I've noticed that people are wearing things on their wrists again, but it's the tiny Apple watch computer screen or one of those huge Garmin fitness watch faces.  I remember when our first kid was having to learn how to tell time manually when he first started school and he asked why this was important because every clock in his life was digital.  Kid arguments like that are the reason "because I said so" was invented.

A year ago I decided to go back to the wrist watch.  I don't wear any jewelry.  Not only is it a hazard in my line of work, I also just don't like things hanging off of me.  But I often found myself in conversations with people and also really needing to know what time it was.  When they pulled out their phone and looked at it, I felt that was rude and not conducive to conversation.  I know they could have been just checking the time, but they also could have been bored and hoping to find something more interesting and stimulating than me on their phone.  I never wanted to be that rude to them.  Even if I needed to be across town to pick up my kids in eleven minutes.

Even in conversations I didn't want to be a part of...when I was being held hostage by a non-stop talker and really needed to escape, basic decency kept me from pulling my phone out of my pocket to check to see how long they had been talking.

But the wrist watch.  I was quick enough to be able to check the time on a watch without being rude.  You just have to watch the eye contact.  You maintain eye contact with a smile and wait for them to look away.  Your arm is already positioned so that a quick glance is all you need.  As soon as their eyes move left or right, boom, you check the watch and you're back at eye contact before they come back.  Such is the inner thought process of a socially awkward person.  Still, I know what time it is without being rude.  All I needed was to find my old watch.

I'm sure I had any number of watches as a kid.  I think I even had one of those calculator watches in elementary school.  I didn't do math, I think it was just cool for a couple of months.  I probably spelled questionable words with the upside down numbers and found various other ways to not pay attention in class.

I was in high school in the 80s (class of 1990!) and that was right up in the wheelhouse of the rise of Swatches.  Swatch was a Swiss brand name of colorful, plastic watches.  When the plastic neon 1980s bloomed, their designers jumped on the train and produced cheaply made, durable watches with interchangeable bands.

I worked in my dad's metal shop and cut grass for the lady with the big yard on the corner.  Swatches were cheap enough that I could afford them.  The idea was that you could buy a Swatch and when you wanted to change it up, you could buy new bands in whatever colors you wanted.  They even had those rubber "Swatch Guards" in bright colors to protect the watch face which also gave you more ways to change things up. 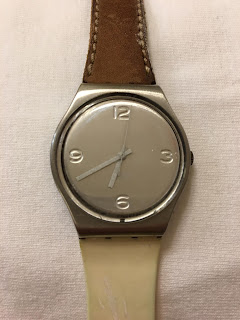 As best I can remember, this was one of my first Swatches from around 1988.  The silver watch came with the leather band still attached to the top.  At some point I changed it out with a white plastic one. 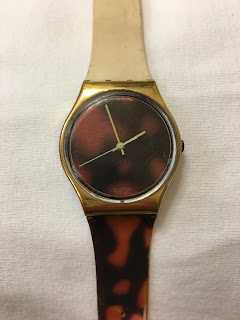 The animal print one above was probably from the same time period and had both plastic printed bands to match the face.  Swatches were water resistant up to several feet under water so as a teenager, I don't think I ever took it off.  It swam with me and showered with me.  Eventually the plastic bands would crack and break, so you'd just dig into your box of spare bands that you thought were a good idea one night at the mall and you'd switch it out.  Apparently I thought white was a good idea. 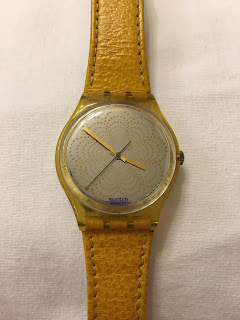 In college, I'd like to think my artistic taste developed a little more fully.  Swatches were not really the thing anymore, but I still appreciated the inexpensive functionality and the design.  There's always been a beauty to the proportion of the watch to the bands and the sleek flow of the watch casing into the curve of the bands.  I took this one off to sleep, swim and shower so that helped prolong the life of the bands.  I still think the design of this one is cool but mustard yellow?  What was I thinking?  This one is probably from '91 or '92. 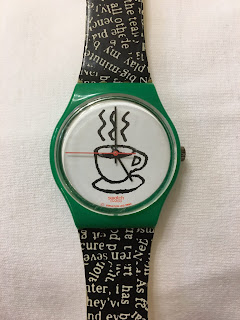 I still love this one.  They started printing the date on the watch face and this one is from 1992.  It was probably purchased from the Belk store in the Galleria mall in Rock Hill, SC.  I discovered my love of coffee in college and this seemed to be the perfect design. 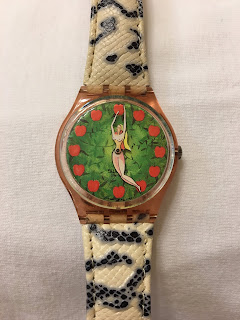 I never got to wear this one much but it's from 1993.  I bought it just because it made me laugh.  It's Eve, she's naked and at every hour she's picking forbidden fruit.  The top of her body and the bottom of her body work as the watch hands.  The band is fake snake skin.  It still cracks me up.  I think I kept wearing the coffee watch instead of this one to protect Eve.  She's still in really great condition. 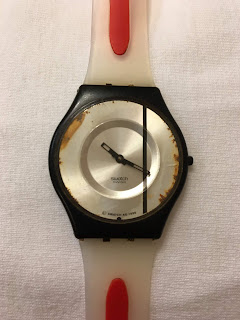 In less great condition is this beauty from 1996.  This puppy really got used.  It's one of my all time favorites.  One of the owners of the place I did graphic design for a long time got me this one from Switzerland in '96.  It was the first "skin" Swatch I owned.  These are much thinner and lighter watches and for a person who hates to wear things, it's perfect.  This one got a ton of use in the late '90s and early 2000s and it served me through graduate school.  It got beat up pretty bad in the sculpture studio and even took a couple of good hits on the concrete block walls there.  I wore out the original bands and got these replacements at the Swatch store in Times Square in 2003.

It still kept perfect time until I got my first iPhone 3 and decided I didn't need a watch anymore.  This is the one I dug out of a drawer last year during the spring semester.  I got a new battery for it and I was back on manual time again.  I wore it to our first Sand Sculpture class in May, 2017 and the cracks in the face proved to no longer be water resistant.  It took on some salt water during our surfing escapades and the interior started to rust.  The watch worked fine, though.  At least for several more months.  That's when I noticed it running a bit slow and had to set it every couple of weeks. 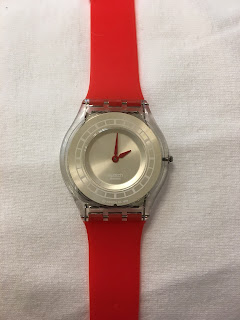 That brings us to my current Swatch from 2017.  G got me this one for my birthday to replace the old skin.  This one is also a skin and it goes with me every time I leave the house.  It survived the Sand Sculpture trip of 2018 although I admit I took it off for surfing this time.  Shopping for this one was difficult.  I think we ended up getting it from Amazon second hand.  There were so many Swatches to choose from and I discovered so many designs I never knew existed.  The James Bond collectible series was pretty cool, but nothing came close to the one I've wanted for several years now... 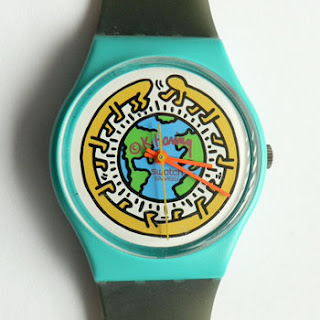 A Keith Haring designed Swatch from 1986.  I should have splurged for it years ago when I saw it on Ebay for $300ish.  When you can find them now they seem to be a good bit more.  I talked myself out of it then because I'm pretty realistic about functional things.  I want them to look good but I also want to use them.  The fancy plates that you aren't supposed to eat off of?  I have no use for that nonsense.  A Swatch designed by Keith Haring is useless in the box sitting at home.  I'd need to wear it and I'd scratch the face on the first day and have paint on it within a week.  But still, it's really cool. 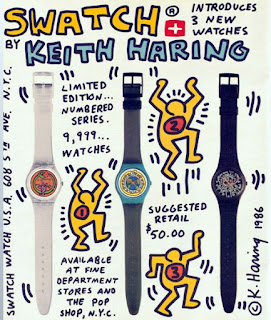 A couple of my students came back from Paris last summer with new Swatches on their wrists.  That made me happy.  I'd love to see the Swatch Company continue to be successful and I'd love for humans to start wearing manual wrist watches again.