When the new green leaves come out, the hummingbirds return and the flowers start blooming there's an excitement in the air.  Not excitement for spring, I'm talking about the annual Sculpture Deathmatch! 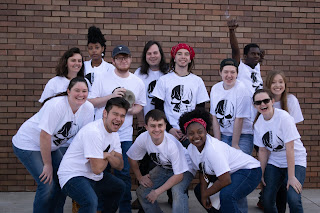 Each year we hold this event on a spring Saturday in the sculpture studios.  Normally we have 2 teams of sculptors battling it out for a 12 hour period of time.  The teams compete to design, create and install outdoor public sculptures on campus between 9am and 9pm.

But this year there was a bit of a twist... 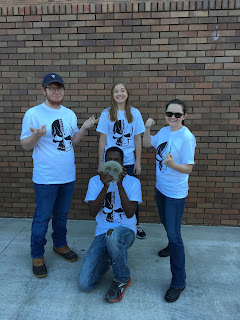 We had Team Skeletor made up of students who have not yet taken Sculpture I (Drayton, Justin, Katherine and Hannah) 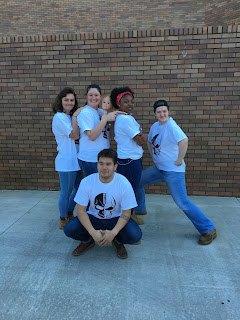 And Team Bad & Boujee Barbies made up of students who have only had Sculpture I (Ashley, Jarecki, Brandon, Jamea and Jax) 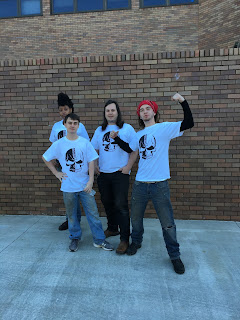 And Team $30 or Less made up of my advanced sculptors who have taken classes beyond Sculpture I (Kenya, Dillon, Seth and Adam)

That's right, 3 teams this year.  And boy were they confused by this. 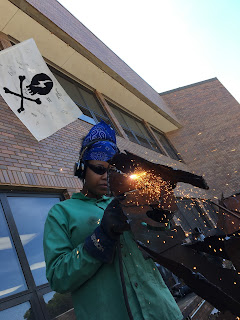 It was such a fun day.  I put out the call for interested students several weeks back and I really never know what's going to happen.  Again this is a Saturday amid one of the busiest times of the academic year.  These students could go home, they could work all day for pay, they could tan by the campus pool or they could stay in their underwear all day.  They really have to be a little bit crazy to volunteer to work a 12 hour day for free.  Did I mention this isn't related to any class credit or grade?

So the people who sign up must really want to be there.  I had more volunteers this year than ever before.  This is why we had three teams.  Every person who volunteered who had not already done a Deathmatch was accepted.  One had to cancel when we moved the date back a week.  One slacked out on me.  The rest showed up with smiles and sleepy eyes.  They had some sugar and carbs and they got to work. 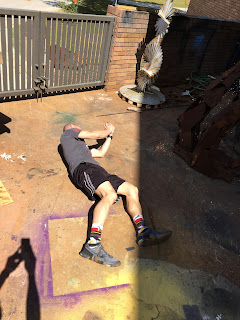 The Slagle always shows up to support us.  He'll do anything to get good photo angles. 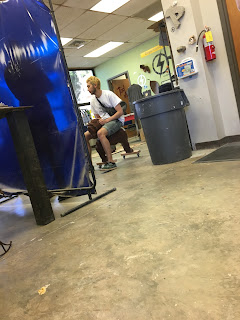 We also had a ton of visitors.  Spencer came to hang out and ride the new Sculpture horse, Lightnin'.  I put him to work a bit while I went on a supply run to Lowes and he taught a freshman to weld.  He's my student worker so he was qualified and I trust him.  He may not realize what a big deal that is. 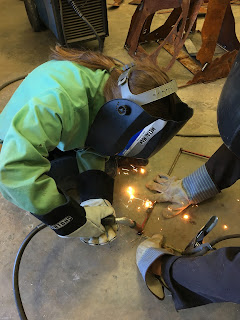 I think that's him on the right and Hannah on the left.  I'm not positive. 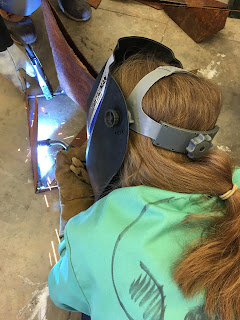 And that's Katherine, also a freshman welding for the first time. 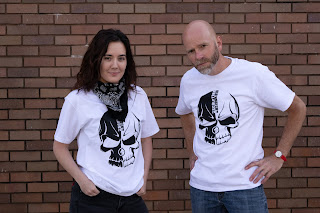 We've been doing this thing since 2013 and I've learned a few things along the way to make it better.  I know how to stretch the budget to feed the troops all day and I've learned to have some help.  I can only be in one place at a time and I can only stand to hear "MCABEE!!!" yelled across the studio about 4,237 times before I snap.  This year I acquired help from Sabrina "Captain Side Eye" Sullivan.  Somehow she has ended up being a student in one of my classes every semester for the past 3 years...until this semester.  Each semester we've accidentally dressed alike at least once and when it happens, someone always documents it with a "twin photo".  We have a collection of these saved on our phones. 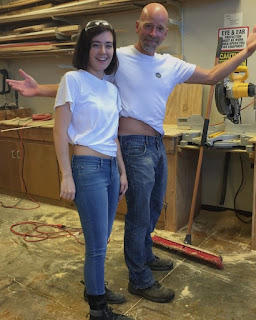 This is probably the funniest one from 2 years ago.  She's a hard core sculptor and it seemed right to bring her in to be the Mini Me for a day.  I think students are more afraid of her than they are of me anyway.  She took over the LanderVisualArt Instagram account for the day.  She took photos, published things to the IG story all day, helped with supply runs and gave people the side eye when they deserved it. 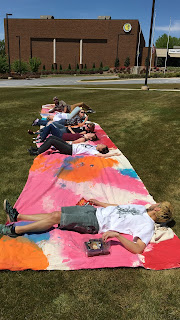 It was a gorgeous spring day on campus.  There were a couple of random students lying in the sun on the front lawn when we came back from Lowes.  As a goof we talked about running out there in our sculpture clothes and tanning with them.  By the time we organized a plan, gathered all the non-Deathmatch people and checked in on each team, the tanners were gone but we still decided to take a break in the sun.  We didn't have a towel but Spencer carries things like this around in his truck all the time so we all fit on his large scale painting with room to spare. 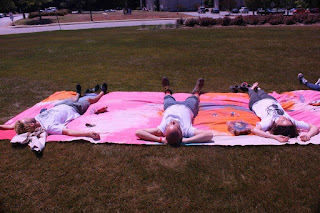 Maybe we should keep this between us.  I'm not sure if the Deathmatch people knew where we went for 30 minutes.  And we took the brownie bites with us.  They warmed in the sun inside the container while we dozed in the sun and when we ate them it was like they were fresh out of the oven.  We shared them with the Deathmatchers when we went back inside. 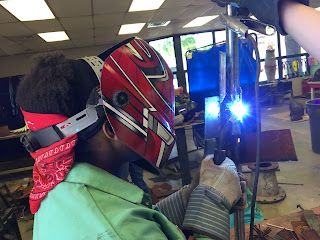 Back in the studio it was crunch time.  In the late afternoon the teams were feeling the pressure.  J-J-Jamea protected her poof while welding for the Barbies. 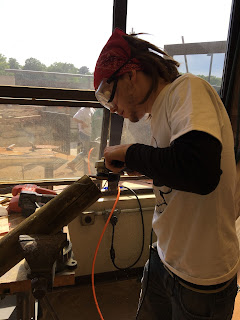 My advanced sculptors hit the ground running and acted like they were not even fazed by the no welding rule.  They went straight to the woodshop and took up residence there.  Adam carved some wood to fit. 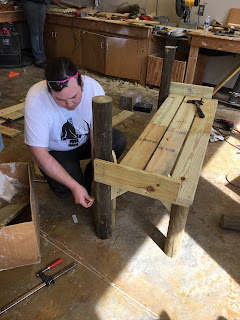 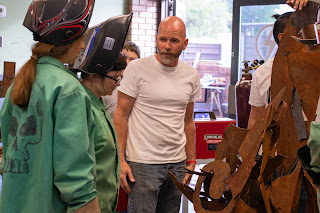 Another helper I had this year was an official photographer from our gallery staff.  Amber Snodgrass spent a few hours with us at various times through the day to take photos for us.  She did all the official group and team photos, took some action shots through the day and came back at the end to do wrap up pics.  She's really good with the camera.  So that's me giving some advice to Hannah and Katherine, Uncle Ricky's little man bun sticking out from behind the sculpture on the right and the top of Blue's head over my shoulder.  G and the kids came in the afternoon to see the show and hang out. 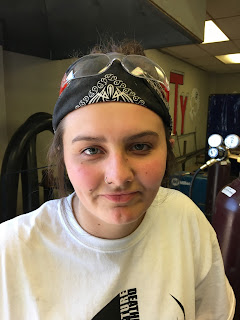 When you stick a camera in a Deathmatcher's face after about 8 hours of hard work, this is the kind of face you get.  There's steel dust smeared across the skin, exhaustion in the eyes but there's still a smile lurking on the face. 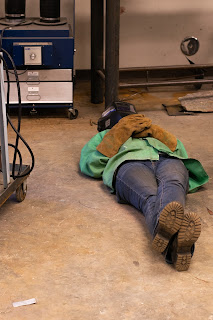 It's difficult to describe the amount of energy the Deathmatch takes from a human.  Sometimes impromptu naps have to take place.  It may be right in the middle of the noisy studio. 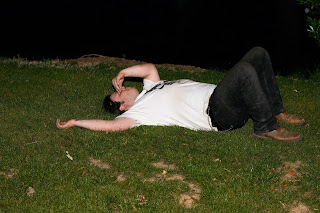 Or it may be on the grass the moment your team's sculpture is installed. 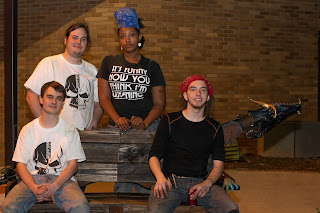 Team $30 or Less finished first.  They were smart enough to design a bench that needed no anchor to the ground saving them a good bit of time and effort. 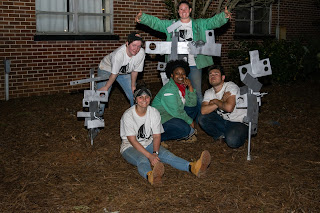 Team B&B Barbies send a couple of people out to dig holes while a couple stayed back to finish the painting.  They installed with a little time to spare. 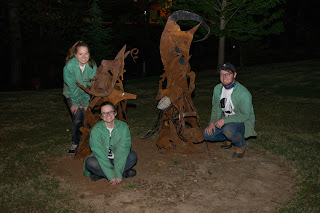 Team Skeletor ran right up to the last couple of minutes of the deadline.  The two pieces were installed about 3 minutes left before the 9pm deadline. 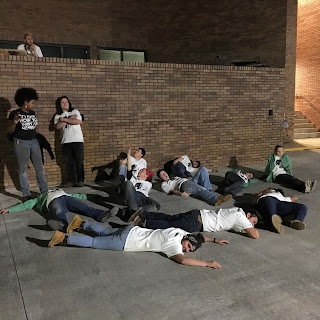 After the last one was installed, we gathered back at the Sculpture deck for some final photos.  Energy was low. 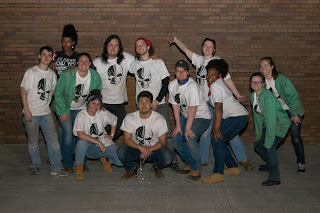 They rallied for this one and then we locked up and headed for LaHa for a late dinner.  I'm told some of them slept most of the next day.

One of the Deathmatch traditions that has developed over the last couple of years is the Official Sculpture Deathmatch Portrait.  After taking some iPhone close up pics of each team member to post on Instagram, I'll use downtime throughout the day to do some quick sketches of the Deathmatchers on scraps of paper and matboard found in the studio.  This year I thought I'd skip it because there were so many faces involved but this almost led to a riot.  So I sucked it up and found a piece of plywood and got to work.  The day was busy and people tend to get upset when you screw up their likeness, so it was slow going.  I think I got 3.5 faces done during the Deathmatch.  I was told I had to finish it, so I used some office hours the following week to add more faces.  I still screwed up some of the faces but for the most part there were parts of each soul on the board.  Then I decided to add Sabrina and me since I didn't nail her likeness last year when she participated.  This is the finished official portrait for 2018.  It's no Barack and Michelle, but it's not bad. 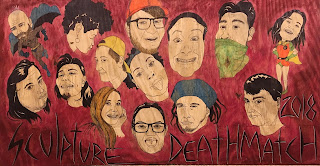 Back to our story... 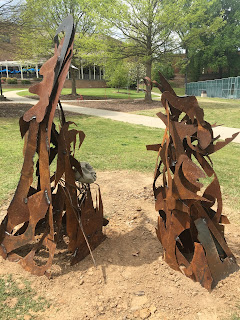 In the daylight of Sunday we could see what was created.  Team Skeletor's steel forms. 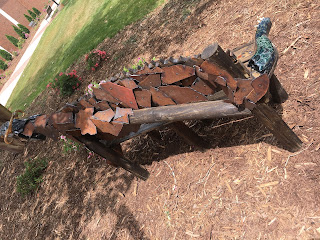 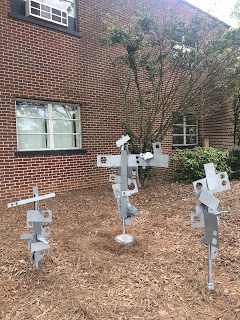 Voting for the winner of the Sculpture Deathmatch is always done by popular vote.  This year we returned to Instagram for voting on the LanderVisualArt account.  Anyone in the world could vote by liking the image of the team's sculpture.  You could vote for one, two or all three of the sculptures.  When the votes were counted it was Team Skeletor who came out on top.  Drayton, Katherine and Hannah will be immortalized when they sign the Sculpture Deathmatch Flag to be displayed throughout the academic year in the sculpture studio.

Each team and each student who finished the day has a lot to be proud of.  All three teams met the goal of designing, creating and installing an outdoor public sculpture within 12 hours.  Each individual made me proud by giving their best and working hard all day.  These are my people.

Special thanks to the entire Art Department for allowing me to do this ridiculous thing each year.  Thanks to each member of our art family who came out to heckle, snack and work on projects in the sculpture studio just to be a part of the fun.  Thanks to Daniel Sorrow, art teacher at Laurens High School and to Adri Jordan, art teacher at Clinton High School for coming out to visit and watch the Deathmatch.  Thanks to Spencer and Sabrina for helping me keep it all under control.  And thanks to every person who voted.  We'll look forward to doing it all again next year.