Some students sent me an internet link to a video over the summer.  The video showed how to make a small charcoal forge for about $50 from common items bought from a home improvement store.

We all know the internet is full of lies.  I assumed this was questionable information despite the tutorial video so I did a little research and figured that it must be really close to the truth.  At least close enough to give it a try. 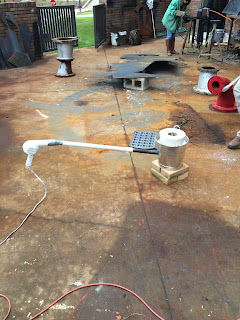 $50 later I took an afternoon to make the refractory chamber and lid.  An old fire extinguisher that was rotting in the sculpture room made a perfect crucible and an old hair dryer and some duct tape gave us a blower. 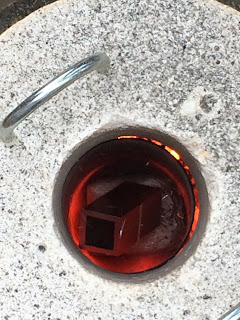 Luke took a keen interest in these parts lying around the studio.  He asked some questions and had the same amount of disbelief I had.  But he also had the same amount of interest I had.  It didn't take much encouragement for us to start carrying things out on the sculpture patio.  Everything assembled as expected and soon we had the heat to melt our aluminum scraps. 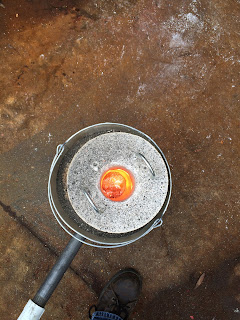 Fire is always interesting to watch but molten metal is awe inspiring. 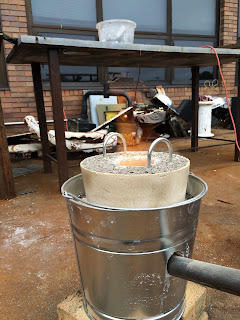 The blower did it's job of heating up the coals and blasting a nice little orange flame up and out of the vent. 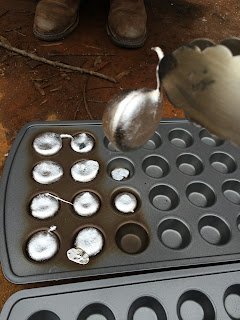 Once the aluminum was liquid, we poured it into the mini muffin pans.  This gave us small nuggets of pure aluminum that would be easy to melt down when we were ready to cast a sculpture.

Apparently Luke was ready to to cast something pretty soon.  A couple of days later he showed up saying he bought some foam and he wanted to give it a try.  Later that day he came back to the studio with a small owl carved out of foam.  This was not part of my plan for this already busy day, but how could I resist such an opportunity?  Again we carried the parts outside and got the charcoal burning. 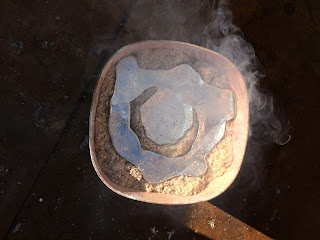 While the aluminum ingots melted in the forge, we grabbed a small bucket and filled it with sand.  We scooped out enough space to insert the foam carving and carefully packed sand around it in the center of the bucket.  The sand we had on hand was pretty coarse but we didn't exactly have time to run out and get more.  As soon as the aluminum was ready, we poured it onto the exposed foam and into the mold. 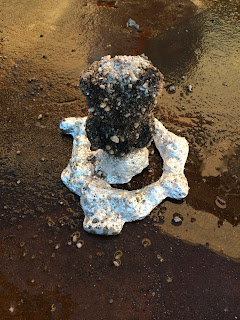 The foam instantly burned away and the liquid aluminum took it's place in the sand.  We grabbed the exposed aluminum with the tongs and lifted the cast owl out of the sand. 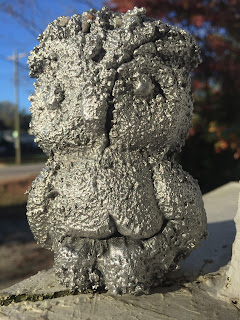 Luke took a wire brush to the owl and cleaned it up.  Not bad for our first try.  We're going to have a lot of fun with this in the near future.
Posted by e-sketchbook at 7:18 PM