For Lent this year, I gave up watching TV.  Compared to most of the things I've given up in the past, this one was easy.  Easy and also very good for me.

There were some bad things about not watching TV.  There was some family time lost.  The kids love their TV and when they feel bad and ask you to sit and watch TV with them, it's tough to say no.  Once I did have to let Violet sit on my lap while I stared out the window trying my best not to watch Dora or whatever she was watching.

G mostly played along with my weirdness.  She taped a ton of shows for me on the DVR and even waited on Easter to watch a few of them with me.  Some I'll still have to watch on my own, but she was nice enough to not tell me what happened in them.

There were a couple of nights when I had worked hard during the day and was dog tired.  Those nights I wanted to collapse into my chair and zonk out on the TV.  I resisted.  As time went on, it got easier and easier to resist.

I've decided that TV is a presence.  It becomes a character in a house.  You spend time with it and it provides things for you.  Sadly, these things can get in the way of being productive.  Yes, it's tempting to just sit and not think when you are mentally and physically exhausted, but maybe it's better for you to draw or read.  And that's pretty much what I did during Lent.  I finished a book, completed 6 new drawings and started another book. 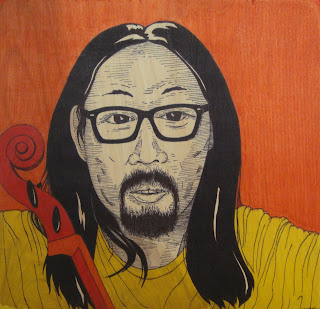 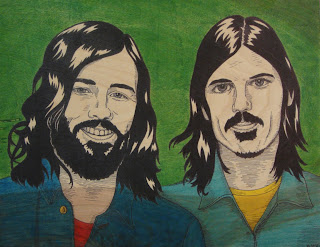 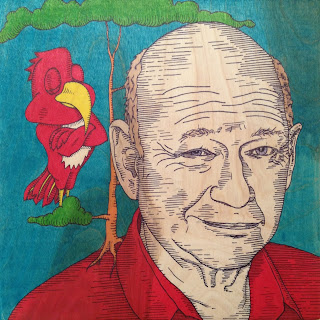 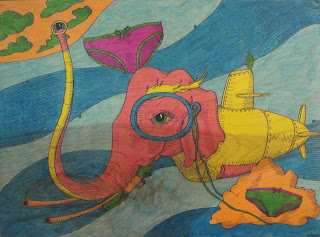 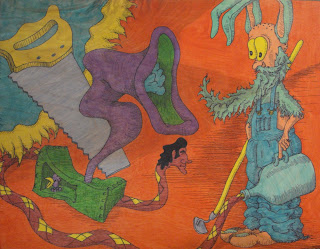 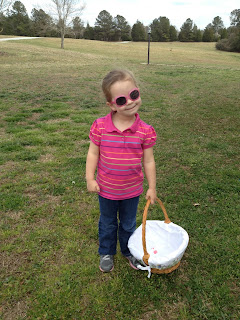 Easter weekend seemed to come quickly.  On Saturday we fished out the baskets and headed to Fountain Inn for an egg drop.  G found this in the paper and we decided we'd go see what it was about. 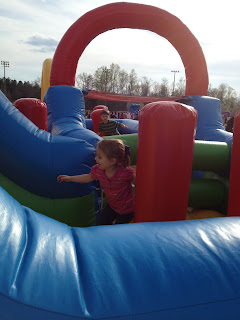 There were tons of bouncy things for kids to do and tons of kids there to do them.  So many kids, that the lines were super long to get into each one.  Think Disneyland in the summer.  It was crazy.  And it was a people watching goldmine.  All shapes, sizes and backgrounds were represented.  So we stood in line and stared at people. 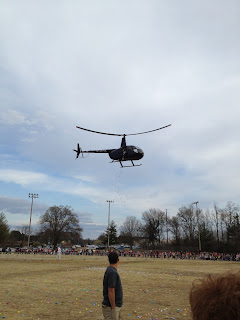 We were told the helicopter would be coming soon and we took our places at the barrier around the egg field.  The instructions were clearly repeated again and again.  Stand at the barrier.  Wait.  Watch the helicopter drop the eggs and prizes.  Wait until the helicopter clears the area.  You will be told when to grab the eggs.  Please limit each child to 10-12 eggs so there will be enough for everyone.  That's pretty clear, right?

But that's not what happened.  The helicopter dropped thousands of eggs with a tiny piece of candy inside each one.  Then it dropped these little Chick Fil A cows with parachutes.  They dropped straight down and the downdraft would scatter them across the field.  As the helicopter repositioned itself to evenly distribute the goods, the downdraft pushed some close to the barrier.  The temptation was apparently too strong.  These kids wanted the stuffed cows so bad they pushed past the barrier and spilled onto the egg field.  Thousands of other kids, feeling like they were being cheated, raced onto the field just a few feet under this flying machine with steel blades rotating above them.  The helicopter fled the scene and within seconds the eggs were gone.  Or, not gone exactly.  Most of them were opened, emptied and crushed on the grass.  Blue got 7 eggs and 2 of those were empty.  Violet got 2 eggs and both were empty.  They were not happy.  Running children crashed into each other violently and full baskets flew into the air.  Parents and other adults who were old enough to know better, ran through a sea of tiny children chasing after the stuffed cows still falling from the air from the helicopter now high above.  When a parachuting cow would fall a huge crowd of big people would gather and jump. Then, they'd grasp and fight for the cow.  A cow I'm pretty sure you get for free if you go into a Chick Fil A restaurant with a kid.  Who needs TV when you can this kind of reality train wreck in real life? 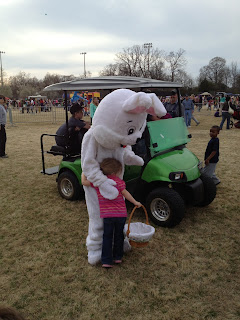 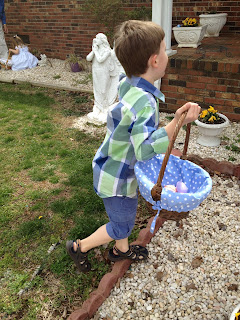 Then came the real egg hunt on Sunday after church.  My kids' eggs were hard boiled and decorated by Sharpie markers.  There were no mobs, no helicopters, no flying cows and no TVs.  Only happy kids playing outside - the way it should be.
Posted by e-sketchbook at 1:02 PM