Last Thursday was the reception for "The One About Pop", a solo exhibit at the Chapman Cultural Center Guild Gallery in my hometown of Spartanburg.

Sparkle City is a tough town for contemporary art and I've had some less than stellar experiences with exhibits there.  In fact, a few years ago I told myself I'd never go out of my way to try to show there again.  Nothing personal against anyone there, it's just that there are expenses involved with any sort of exhibit and when you do several and sell nothing, it's just good business sense to cut your losses and move on to greener pastures.

This exhibit happened because of Robin, the executive director of the guild.  She's cool and she asked.  As much as I did not want to invest in another exhibit there, I decided that this was an opportunity to get people exposed to contemporary art and possibly even make them smile. 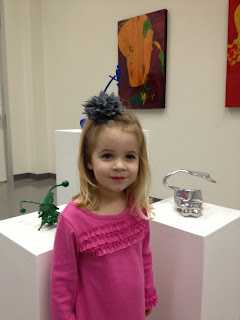 It ended up being worth the trouble if only because of the fun my kids had with it.  That's Violet being adorable with the art.  You saw the images of Blue drawing with tape on the gallery floor, right?  Well, he enjoyed being a part of the installation so much that I decided that he needed to be the designer for the poster to hang out in front of the gallery. 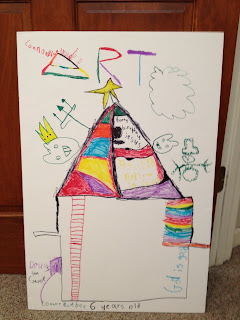 He was so proud.  It's a house with space inside for a printed ad for the show.  There are angry bird pigs on the roof, a trident, a ladder, a snowman cloud, "ART" at the top, several references to God and my favorite part "Doug's son Connor, Connor McAbee 6 years old".

He looked forward to the reception for weeks and he and Violet reminded us every day that soon we'd get to go to the "art show".  They enjoyed being there. 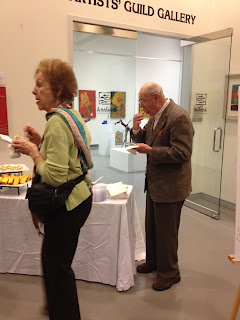 Lots of family and friends came out to make the hours pass by faster.  The reception was timed with the local art walk which runs from 5-9 pm.  That's a long time for me to be social.  I mostly stood around and watched people.  There were lots of elderly visitors and some of them were very kind and supportive.  One elderly gentleman told me how good it was to see contemporary art in Spartanburg and he couldn't believe that I was showing it there.  He urged me to get my work in galleries in New York or Los Angeles....believe me, I've tried....and then he told me a very interesting story about how he met his wife.

It was also fun to watch people react to the food we served.  Since the show was about my dad, Ginger had the idea to serve some of his favorite foods.  We had his favorite cake made by my mom, peanut butter and banana treats, sweet tea, and chicken, rice and gravy in a cup.  You read that correctly, chicken, rice and gravy in a cup.  The nice lady in the photo above is eating it and she's just realizing that it's delicious instead of gross.  It was really good.  That's Delightful Dishes in Inman, SC for all your catering and lunch needs.

As I said, lots of friends and family came out.  Aunts, uncles, cousins, nieces, second cousins...the works.  Laura Jean and mom were there.  Brother David and his wife and oldest daughter ventured down from the mountain.  Doris drove from Greenwood as did Dr. Neely.  Beth and Wayne drove from Rock Hill.  I was honored that they made such an effort, especially on a night when the National Weather Service was predicting 1-3 inches of snow to fall during the reception hours.  The only bad part about it was that they all came to hear the artist talk I was supposed to give at 7:30.  My secret plan was that if only a couple of people were there, I'd just try to forget about it.  But when people drive for more than an hour, you have to suck it up and do the talk. 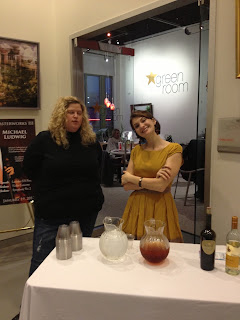 I think someone said that the key to success is to surround yourself with good people.  I think I've got that part under control.  Georgie juggled kids, delivered wine and prepped food, all while making sure homework was done.  Ginger (photo above on the left, the one with her eyes closed while she's telling me not to take her picture) came up with the food idea, made the food in creative ways, served the food from her traveling kitchen and still managed to take in some art and people watching.  Did I mention she owns Delightful Dishes in Inman?  Excellent club sandwiches, baked spaghetti and chicken & rice casseroles.  Ali (the one beside Ginger) drove all the way from Saluda, SC to be the bouncer and bartender. These are good people.

The exhibit is up through Jan 29.  Go see it and write something funny in the guest book.
Posted by e-sketchbook at 9:18 PM