The March of Dimes is a great organization. Each year they raise money and awareness in support of helping babies. In our area the March of Dimes has provided very expensive medical equipment to local hospitals to care for premature and sick babies and they work with the public to provide information and help to mothers.

Seriously…they’re great. And to you this probably means pledging some dollars or maybe even getting out and walking on a Saturday to raise money. But let me tell you what it often means for me…

The March of Dimes provides a theme each year and companies and groups create cute t-shirt designs based on this theme. Most often the theme is a simple image-oriented phrase and 99% of the t-shirts on the planet somehow contain the exact same image. For example, one year the theme was something along the lines of “taking ACTION for babies”. That year almost every shirt design featured a director’s clapper board with the word “ACTION” on it. (Spoiler alert: this year’s theme is “FIGHTING for babies” so prepare for the onslaught of boxing gloves images)

For the creative mind there’s no joy in taking the expected route. So each year I’ve been asked to design something – and we’re talking about high school years up to now – I’ve always tried to come up with something that went with the theme, but did not take the road more travelled. Keep in mind that the people asking for the free design are not looking for something clever or witty or especially creative. They have to wear these shirts usually and they want something cute. They want something that fits in.

I have a goofy sense of humor so you can just imagine how many awkward situations I’ve created for the requesters of these free designs. They know they are imposing on you, but it’s for a good cause and all….but this is just not the design they had in mind. So they ask you to do it again. Something cute this time. There was even this one time when the lady who imposed on me almost refused to submit the design I came up with and after I stood my ground with her she submitted it only to return to me with apologies and thanksgiving after the design won an award. But it would be petty to bring that up again, right? No really, it was a stupid design and she was right to be embarrassed about it…but it was funny, and sometimes funny wins.

So I can’t say I was surprised at all last week when an email popped up from someone wanting to know if I could design a t-shirt for their March of Dimes fundraiser really fast. Like within the hour fast. I couldn’t say no because I really like this person so the wheels began turning and within the hour I sent them a great idea. OK, not great, but a very funny idea. Ladies and gentlemen, I give you, “Ninja Babies”: 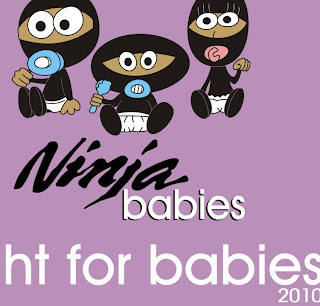 And guess what? Though this person and her cohorts loved it, it was voted down in the larger organization in favor of a design with……that's right……boxing gloves.