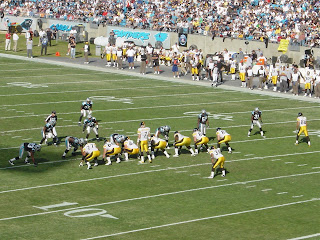 I know I'm supposed to like the Panthers since I live just an hour away from their stadium, but my father had the good sense to raise his sons to be Steelers fans. My first jersey was a Terry Bradshaw number 12 and when I was wearing it in elementary school there was only one other Steeler fan in my school.
My cool brother and I have been able to visit the stadium in Charlotte a few times, but only when the Steelers are in town. I took the photo above on our last visit there during the 2006 regular season and the Steelers won. Tonight they won the Super Bowl. Again.

In less than 2 weeks pitchers and catchers report to spring training. Now if only my Cubs could put together a championship season.

My friend uses blogspot too, and on top of the site you can press a button called next blog or something? So I pressed it a couple of times until I saw a blog with a language I at least could read;)

Nice meeting you too

Cool blog. Did you make the "for sale" picture? or the one at the bottom of you'r page?

Yes, I draw, paint, and make steel sculptures. You can see more of my artwork at www.dougmcabee.com.

Thanks for looking around.