Close to a year ago I received a text from a friend. He knew of a hospital working on a renovation project, and they were interested in having some art.  They asked him to provide some photography work for the hospital, and he heard they wanted an outdoor sculpture.  He suggested that we all get together and have a meeting to discuss.

I try not to get excited about these types of meetings.  It’s common for potential clients to not understand the nature of public sculpture and, specifically, to not understand the costs involved.  I went to the meeting with no expectations and gave them a ballpark price. I wanted to see if this was something any of us wanted to pursue seriously.  They were interested and wanted me to come up with some designs.

Of all the parts of a privately funded public sculpture project, this may be the most difficult to navigate.  Even if the client is familiar with the style of your work, this does not mean they want a sculpture like your typical work.  Most often a project like this will have a theme or an expectation and they’ll ask you to work in that direction.  With this particular client, I was given a lot of freedom and while they did provide a clear starting point and theme, they understood that it was important to find a design that would make the client and the artist happy.  In this case, there was also an architect firm directly involved in the process, and it was important to make them happy as well.

The starting point was a rocking horse.  The rocking horse is an image the hospital has used for many years for a special donation fund to support their newborn and infant care services.  The original image was very literal and looked exactly as you would expect. 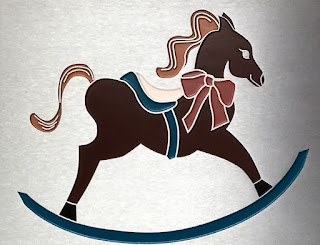 Using that as a jumping off point, I spent several weeks working to abstract the image to a point that would satisfy all the entities involved.  Communicating by email with everyone and meeting in person a few more times, I was able to arrive at a design that everyone agreed on.  I brought the designs on paper to our next meeting and also created a small wooden model using some scrap wood and some bright yellow spray paint.  The model made an impact and helped everyone understand exactly what the sculpture would look like. 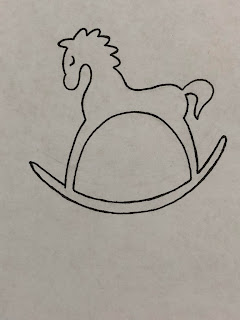 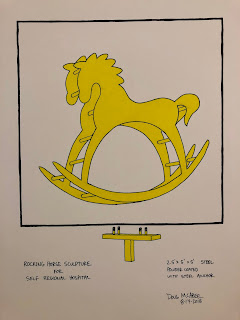 This was still early in the renovation process.  The public sculpture location was to be outside the building in a small plaza area.  Logistically this meant that the installation of the sculpture would need to happen at the very end of the project.  There would be some waiting around to finalize exact sizes and exactly how things would be connected.  We were also told there would be some waiting on fundraising to get the final approval to begin the sculpture project.

After this, months went by.  I had blocked off time to create the sculpture during my winter break in the month of December.  This would allow the sculpture to be created and then be sent off to be powder coated which can take several weeks.  After the sculpture was totally finished, I would then just need a day to install it.  The installation was penciled in for March.  That was the plan.
Plans change with construction projects.  It’s common for completion dates to be pushed back.  During this project, I was waiting on the hospital to give the final go-ahead to start the public sculpture project.  The architect firm thought this was the plan as well.  The hospital thought everything was moving forward.  Winter break came and went and I had no new information.  I should have contacted more people and asked more questions, but my assumption was that like many projects of this nature, the funds didn’t come through and the sculpture part of the renovation may have fizzled out.

In February I remembered the sculpture and sent an email to the architect.  That’s when everything kicked into fast forward.  Essentially, everyone but me thought the sculpture was all taken care of and that we were all still on the same installation plan.  That installation plan was for March if you remember.  Lucky for me the architect firm was on the ball.  Once they realized no one had given me the final approval to create the sculpture, they stepped in and took charge.  Instead of the hospital hiring me to create the sculpture, the architect firm took me on as a client in order to speed up the process.  Everyone I dealt with there was really great.  They kept me informed and worked very hard to get all the signatures, amounts, and approvals needed to get me started making the sculpture in less than two weeks.

When the materials arrived, I spent some focused time in the studio, and the form was built in a few days.  It was cleaned, perfected and prepared for powder coating in a whirlwind of activity.  I had some help loading the sculpture into my trailer for delivery to the powder coating company, and it was around this time that the horse needed a name.  He was christened “Charlie”.  I drove Charlie up the interstate, providing some visual entertainment for other motorists. Charlie was dropped off in the capable hands of my powder coating friends. I said goodbye to him for a few weeks. 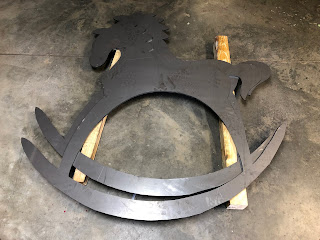 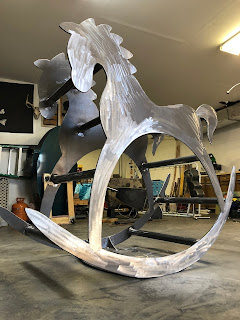 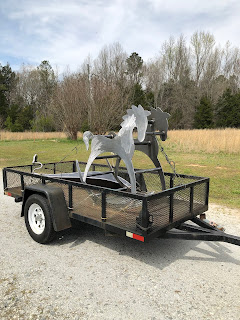 Soon Charlie was ready to come home. I marveled at his beautiful, bright yellow coating.  This particular yellow was going to set the tone for my spring.  It was inspiring.  It was happy.  It was perfect. 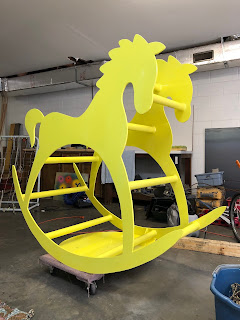 Since starting the sculpture, everything moved so quickly and smoothly that Charlie was a couple of weeks ahead of schedule for installation.  The architect firm coordinated the schedule with the construction company and gave us all a firm date for installation.  This date would be just one week before the grand opening ceremonies, but I only needed a few hours to install, so I didn’t feel a lot of pressure.  The pressure seemed to be on the construction company to get the pedestal and the surrounding plaza area ready in time.

When installation day arrived, we rolled in and gathered some kind workers to help lift Charlie into place.  The pedestal was three feet tall and as a group gathered to help lift, I got pushed out and was forced to watch nervously.  My architect friend came to help get the positioning correct, and then it was just a matter of securing Charlie to the pedestal before taking some photos and gathering up the tools. 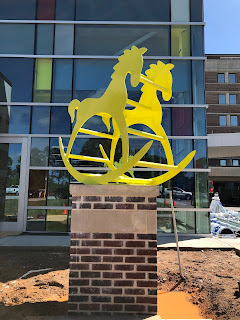 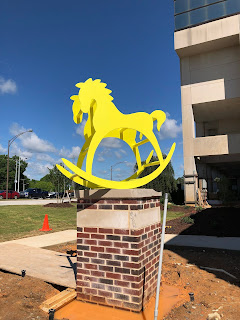 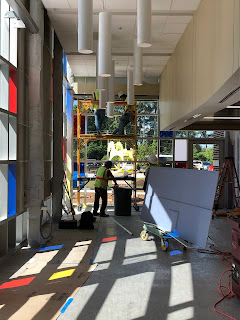 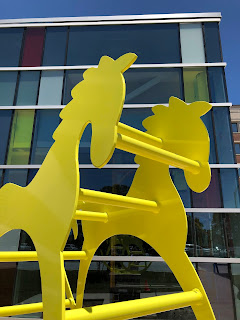 But then things went a little weird.  There were some people involved who apparently didn’t get to see the sketches, drawings, and the model.  They were under the impression they were getting one of those classy bronze sculptures, and you can imagine their surprise when they looked out their windows and saw a bright yellow Charlie shining across the way.  With only one week until the big grand opening, things started moving very fast.  It started with text messages, then emails, and then more lengthy emails.  I went out of town to teach the sand sculpture class the next day and continued to deal with the possibility that Charlie would have his color changed by the time I returned a week later.

This is the sort of occasion when the reality of ownership comes to the surface.  I made Charlie according to plans that were approved, and I met those expectations completely.  A hospital employee stuck in the middle of the confusion told me I had “exceeded their expectations”.  I’m pretty sure he was being sincere.  But I had sold the sculpture to a client, and the client wanted the color changed.  All I could do was accept it and move on.  It took a few days, but I did get over it.  Perhaps it helped that I was at the beach.  Everyone apologized, everyone comforted me about it, and everyone was genuinely nice.

A week later I returned from the class four hours away.  I wheeled into the hospital parking lot with buckets, shovels, and a surfboard tied to the roof of my truck.  I grabbed a Walmart bag with some decent clothes inside and rushed into the closest bathroom I could find to change.  Georgie and the kids were waiting with a crowd of people when I came out. They told me I just missed the announcement of my name.  Later I posed for some photos with some hospital people and with Charlie in his new, neutral coat.

I explained the whole situation to several people during the weeks following the color change.  Many of my friends expressed outrage.  "This is a work of art," they said.  "Why would anyone pick YOU to make something unless they wanted a bright color?" they asked.  "Tell them no," they said.  Luckily I had some time to reflect on the project before getting this advice from my faithful and well-meaning friends.  That time of reflection assured me that outrage was not the best emotion to trust, blame was not the best way to approach the situation, and that telling a customer no was simply not good for business.  And after you sift away all the “This is my art” and “I told you this before we started” stuff, that’s what this is…business.

I make mistakes, I misunderstand things, and maybe I even assume things from time to time.  As regular humans we all do. We’d all like some mercy and grace extended to us when we screw up.  I need to be ready to extend that same mercy and grace to others.

So am I mad?  Heck no.  I made a cool thing from my head and someone wanted to buy that cool thing.  They may have changed the color, but they also put that cool thing on public display in a place where it will make people smile.  How could I be mad about that?  I’m so grateful to have created “Charlie” exactly the way it happened.