This year I asked friends on Instagram to run with me for my birthday.  Y'all know I love running and maybe I talk about it too much.  Through Instagram, I've found a community of people who are just as weird about running as I am and over time I've even developed friendships with many of them.  I've observed them and learned from them over the last few years and I can tell you that I have never found a more happy, grateful and supportive group of people anywhere.

When I woke up on the morning of my birthday, I had a small, warm dog curled up against me so I wasn't in a hurry to get up. I could also hear the steady rain beating on the roof and I wasn't eager to get up and get out in it right away.  So I grabbed my phone and checked mail and opened Instagram to find messages from running friends in countries closer to the International Date Line.  (forgive the lazy screenshots below) 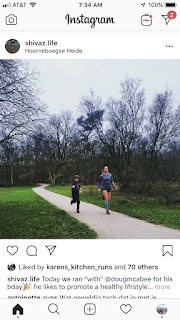 My Friend Shiva had already ran for me with her son in The Netherlands.  Shiva hosted a runstreak during the month of December and gave away prizes.  She's a super cool person who does a lot to promote a healthy lifestyle in her community and she's an advocate of cold water dipping for good health.  I'm still working up my nerve to try therapeutic cold showers. 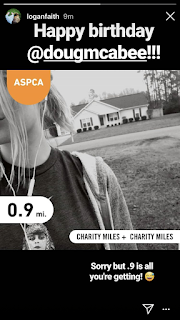 And then Logan Edwards Parker sent this!  She's wearing her cool Lumineers shirt and she and her husband Duncan did .9 miles through Charity Miles for ASPCA.  Charity Miles is an app I use when running that has large corporate sponsors donate money to your favorite charities based on miles you log.  I highly recommend it.  Logan is a Lander Art grad and she was one of my favorites to have in class. 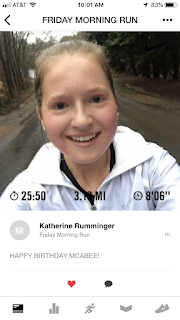 The Gazelle got up and ran in the rain. Gazelle is a current student and a consistent slogger at school.  She's been running a 5K every day for about a month now.  She's getting faster too.  I could learn a thing or two from her determination. 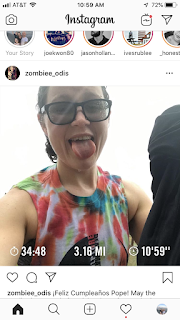 Cardinal Bolt is also an everyday runner.  She's logged miles every day...even when she had her gall bladder yanked out.  She got out in the rain and cranked out a 5K too! 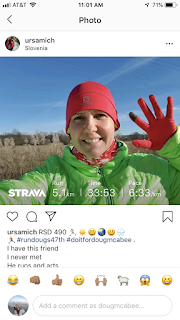 This is my friend Ursa.  She's from Slovenia and she's just finished her PHD thesis.  She does cancer research and I'm pretty sure she's going to be famous for that one day.  She's also a run streaker and has over 490 daily runs in a row going for her.  She's also very kind.  When I was forbidden to run after surgery this year, Ursa took up my daily 5Ks for me for over a month she worked a 3.1 mile run into her busy schedule because she knew how much I wanted to be out there.  This is a kindness I will not forget. 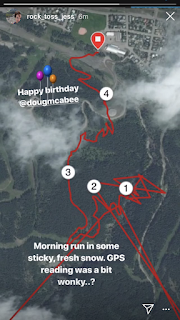 Jess is a friend from the Canadian wilderness.  I mailed her something once and it took months to arrive.  I think the Pony Express delivered it.  Jess owns a bakery and coffee shop and I'm pretty sure I'm going to work there when I retire, if only to draw her chalk street sign each day.  Jess ran over 4 miles with grizzlies and mountains and stuff. 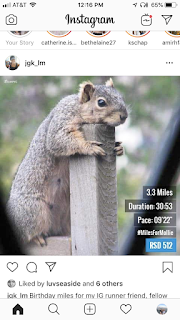 My friend Jessica from Michigan takes cool photos on her runs.  She got out and logged a 5K for me and paired it with this cool pic.  Jessica is a good example of the caring community of runners in IG.  Even though we don't know each other very well, she was thoughtful enough to do this for me.  Really awesome. 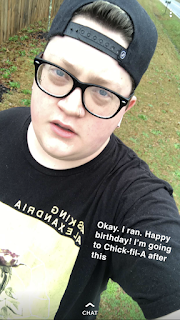 All of these messages made me smile but this one made me laugh out loud.  I didn't expect Nick to run for me.  I've tried to get Nick to slog with me at school and he's laughed in my face.  But dude got out and ran.  He totally deserved Chick-fil-A afterwards. 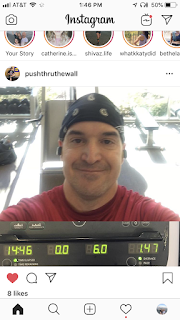 I met Dominic this year through a virtual run.  He lives in Texas and travels a ton but he's always finding a way to squeeze a run into his day.  He'll run at 5am, he'll run at lunch, he'll run at night, but he always gets it done.  He was thoughtful enough to run 1.47 miles with the .47 dedicated to me turning 47.  He's so cool. 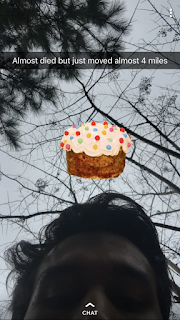 Spencer waited until the rain passed, I think, but he sent me this Snap after his run.  He used to tell me he couldn't run because his heart would explode but last semester he took the Walk/Job exercise class and he took it very seriously.  He went from not running, to running a 5K with a decent time in just a couple of months.  I'm proud of him. 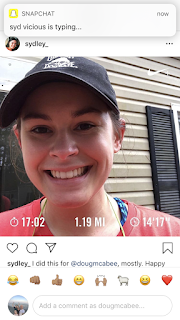 Sydney (Syd Vicious) decided to start running on my birthday.  She said she felt like she was dying but what a huge step in the right direction.  Syd is becoming a potter and she's going to need to stay in shape to lug clay around and throw.  She's even ran another time since this one! 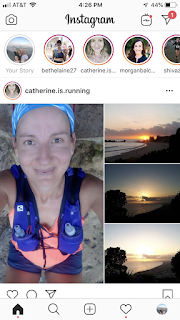 There's Catherine, my New Zealand friend.  She got up before the sun and ran up a mountain to catch the sunrise.  For her it was already the day after my birthday (because the Earth is round and physics or something) but as she said, we celebrate birthdays all week!  She's such a sunshine soul and she's really someone you need to know.  She has a beautiful family and lives in a gorgeous place. 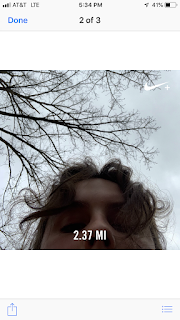 Ashley is another sculpture student and regular slogger.  She got out and ran and sent this very Spencer-esque pic.  She's been running on her own and I think she understands how much running can help with stress and clearing your mind.  Fun fact about Ashley...she used to be a gymnast. 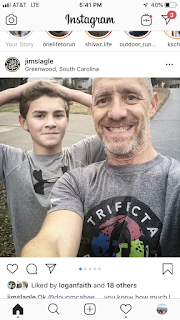 Sweet Jimmy.  Jim is my colleague, buddy and Lander look-a-like.  Just yesterday someone saw him and thought it was me.  Happens all the time.  He and Tyler got out and ran with me in addition to his crazy regular work out. 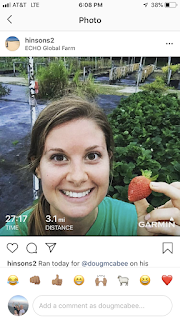 And look at this....Sarah Hinson who I haven't seen in maybe 15 years or so got out and ran with me at the ECHO Global Farm in Florida.  Sarah was so fun as a student, one of those happy people you want to be around.  I can't believe she remembers me! 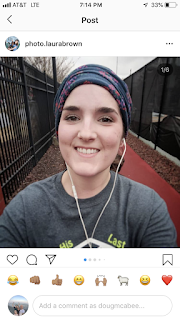 Laura is the school photographer at Lander.  She does other important things too, but this is the job she's been perfect for forever.  She's taken photos of the kids, babysat for us and even watched the dogs for us a couple of times.  She's slogged with us several times this last semester and we've made her go farther even when she didn't want to.  It was so cool for her to run for me. 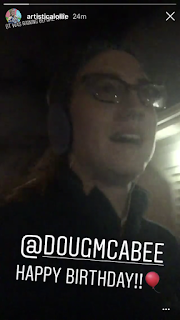 And look at Ms. Oliver!  Hayden is a high school art teacher in our region and she's sent us some really great students recently.  She got out late but she's creative enough to put together a safety bag before going out running in the dark.  It was a clear plastic bag with a flashlight and a can of mace....perfection!  This was a great surprise! 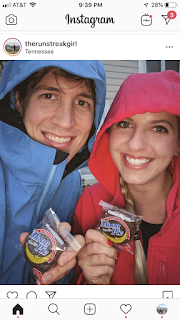 This one cracked me up too.  This is Holly and her husband Preston.  They're super active people.  Holly is a runstreaker, a horse rider and an artist.  We just got to know each other this last year and she's really great.  On my birthday I made a joke about the only gift I really wanted was for Moonpie to sponsor me as a runner.  I still think I'm the perfect person to start The Official Moonpie Running Team.  Holly and Preston had my back when they held up their Moonpies and tagged Moonpie in their post.  Such a thoughtful thing to do. 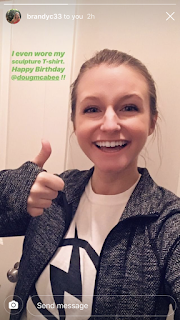 Do y'all know Cessquatch?  Brandy is an all time favorite former student and an excellent racquetball opponent.  When she's not stealing my doughnuts, she's being a graphic designer full time and she's running with Charity Miles for my favorite charity, Habitat for Humanity.  She even wore her sculpture shirt! 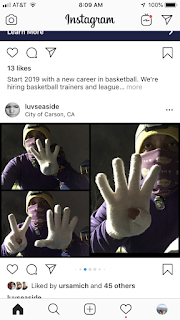 Lei is another friend I met doing a virtual run this year.  He's in California and while he has Type 2 Diabetes, he's handling it without medication by running.  He's currently on a 600 plus day runstreak!  And it's not uncommon for Lei to run double digit mileage.  He's a beast!  He did something really funny with his running post for my birthday...he ran 4.74 miles, a palindrome of my age, 47.  Then he used cookies and containers to make little "butts" as a joke because of my butt drawing Monday posts.  So thoughtful! 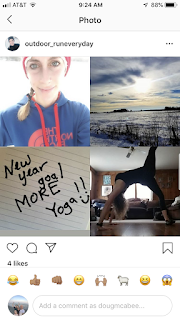 Dorothy is another runstreak friend on a 700 plus day streak.  She loves to run outside and when you live in Wisconsin, that's no easy task in winter.  But she suits up for it and runs in the ice and snow in addition to her other daily workout routines.  She's also the mom of 4 kids so she stays busy. 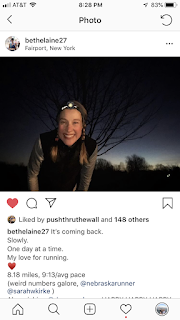 Beth did an early morning run with me.  Running virtually with Beth is all I could ever do because she runs so far and so fast.  She runs marathons the way I eat Moonpies.  She also has 4 kids, teaches piano and holds down a church pianist job too.  Can you imagine?  Earlier this year she taught me the phrase "I can do hard things" and it was particularly helpful this year.  When I get up during the semester and run in the dark, I come back inside and have a monster cup of coffee and one of the first things I see from the outside world is a pic of Beth finishing up her run in the dark.  Somehow there's comfort knowing there's another crazy person out running with me. 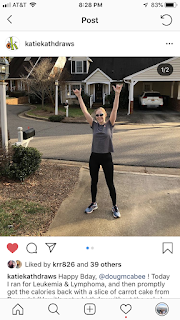 KathKath...that was her nickname in my class...downloaded Charity Miles at my request and got out and ran.  It may have been a day late, but that's how we celebrate birthdays.  We also celebrate them with a slice of cake, just as KathKath did when she returned from her run.  Katie is now an award winning book illustrator and artist. 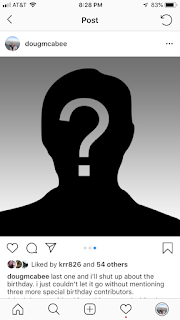 Logan Woodle is a sculpture professor at Coastal Carolina University.  He was one of my students at Winthrop back in the day.  One day I was talking to him and he just casually mentioned that he had started running and was running every day.  He didn't want to make a big deal about it but he had been running a 5K every day for about a year at that point.  I was dumbfounded.  This was the second birthday in a row that Logan ran with me.  He didn't send a photo or make a big deal about it.  He just texted me "happy birthday" and let me know that he was out there too. 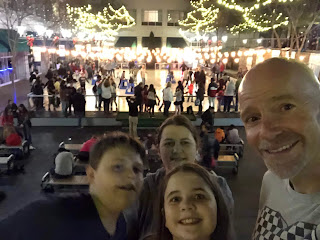 And what birthday would be fun without these people?  Blue, Violet and G always make me happy on my birthday.  They loaded me up with gifts and made me super awesome cards.  They left me notes and gifts before school and work and then took me to eat afterwards.  They are wonderful.

So that was the start of year 47.  Or was that the beginning of year 48?  I forget how birthdays work, I'm old.  But it was a great day and I'm grateful for whatever part you had in it.  And because I was lazy and didn't crop the screenshots, you can look up each one of these amazing people on social media and learn more about them.  I promise they'll add joy to your life.