a snowday with kids

Some of you may not live in the South.  We have a bit of a reputation when it comes to the way we deal with winter weather and with our recent winter event I thought it might be a good time to tell you how it really is down here.

Usually when there's any mention of the word "snow" by a meteorologist, it generates a buzz among snowbirds.  This is what I call the people who still believe the forecasters when they call for snow.  These folks anticipate the snow.  They look forward to it.  They talk about it in every other sentence for a good week before it's supposed to happen.  I've learned to ignore these people.  Last week when the little snowflake icon showed up on the daily forecast several days out, I mentioned it to G, laughed and then moved on.  The next day the snowflake disappeared.  It appeared and disappeared several more times until it started to be talked about as a very real threat.  Two days out the forecast seemed a little more certain.  One day out they told us to expect accumulating snow.  They get very specific with these things now and they're wrong 99% of the time.

Back in my day, calling off school was silly.  If there was an ice storm you might get a two hour delay.  If there was snow falling they'd tell us to come to school and if the roads got terrible before noon, they'd send us home on the bus.  I remember riding the bus home from school in a full-on snow storm.  Now that my kids are in school, if someone smells snow a day in advance they cancel school.  Many times since Blue and Violet have been in school they've called off school because of a sketchy forecast and the actual weather turned out to be sunny and nice.  True story.

Last Tuesday afternoon the schools began to call off students for Wednesday.  I would imagine that at that time the local grocery stores sold out of milk and bread.  I'm not sure if y'all know about this phenomenon wherever you live, but down here when they tell us it's going to snow, we rush out and buy milk and bread.  In reality, we buy a lot more than that, but the midweek rush on the grocery store really puts a dent on the milk and bread supply.  There's honestly a good explanation for this.  Here in the upstate of South Carolina, we have a mostly normal climate.  Hot, humid summers, long springs and really great autumns, but what most people may not realize is that we have pretty decent winters too.  It get's cold here and once or twice each year we'll get a noticeable winter weather event.  Historically we've been unprepared for these in terms of road care and while we're stuck at home it really sucks to also lose power.  The snow we get is generally heavy, wet snow and when we get ice, it's usually a really heavy icing and both of these events bring down trees and power lines.  These storms often catch us by surprise in terms of their severity.  We may be told to expect a "dusting" of snow and get 10 inches.  That happened on a spring break back when I was in college.  After you go without power in a snow storm for half a week, you learn to hit the grocery store and stock up.  You're going to use the milk and bread anyway so it's not like it's wasted.

We don't pay a lot of attention to the news in our house so it wasn't until the school cancelation that we started thinking about weather.  We had groceries and coffee, so we were good.  No milk and bread run for us.

The excitement in the house was something you could feel.  The kids were so hopeful.  A few weeks ago they got a snow day from school but only saw flurries.  Their school is a good bit north of us and we were just below the area of accumulation.  They had to listen to their friends talk about how much snow they received while they quietly brooded and blamed me for where we live.  The last forecast we heard this week indicated that the heaviest accumulation would be right over our house and that we would get more than their friends this time.  Of course that turned out to be incorrect, but it fueled their excitement.  I received word that my school was operating on a two hour delay which meant my only class was canceled.  Regardless of the actual precipitation, we were going to get a snow day.  Violet kissed me goodnight and voluntarily went to bed 15 minutes before bedtime.  She heard the weather dude say the snow would start at 5am so her plan was to get up super early to watch.

Everyone was up when I woke up.  I heard the door open and close a couple of times and saw the glow coming in the blinds so I figured it was snowing.  The phone weather confirmed when I checked the temperature so I got up and put on the warm running clothes. 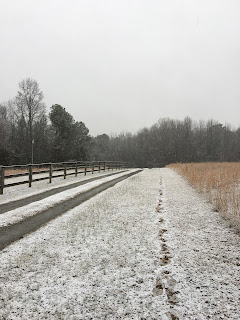 When Violet got up at 5:15, she looked out her window and it was not snowing.  She waited until she heard G get up after 6:00 and it still was not snowing.  It started just a few minutes before I got up which mixed more hope in with the excitement. 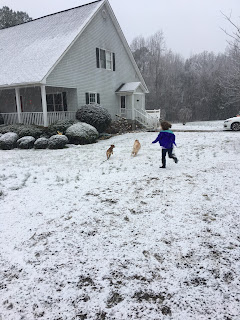 The dogs were less excited.  They ran a little but as soon as business was taken care of, they hoofed it back inside to warm their paws. 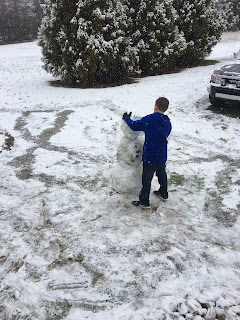 Blue wasted no time.  He had his snowman built before the waffles were even started.  It was a little below freezing and that's him in a steady snow with no hat, only a sweatshirt, running shoes and thin gloves.  He had also laid completely down in the snow several times by this point and was pretty wet. 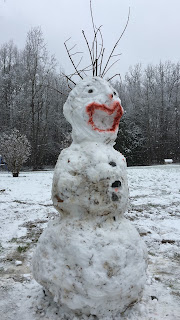 He and Violet worked together on their snowperson and made the spitting image of some annoying character on Netflix called Miranda Sings. 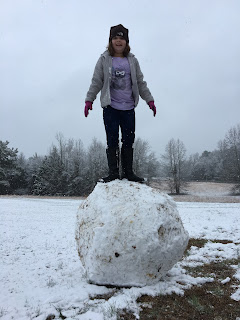 We are typically unprepared with our roads and also with our winter clothing.  While normal winter days here may start out in the 20s (F) the afternoon temperatures will climb to the 50s or 60s.  A light coat or jacket is usually good enough.  Gloves can be tough to find when it snows.  We may have to dig through closets and when we do find gloves they're not even close to being water resistant.  And with the fluctuation in temperatures, snow accumulations can be short lived.  We've learned that you don't wait until the snow stops falling if you want to play in it.  As soon as the waffles were gone, Blue, Violet and I headed outside.  G was home with us, which really never happens on a snow day.  Nurses have to go to work regardless.  But this time G had been growing some sort of sickness for a few days and she finally felt terrible enough Wednesday that she couldn't work.  So while she was home, she probably wished she wasn't.  She couldn't go out and enjoy it with us and she couldn't rest or sleep because we were making noise and running in and out all day. 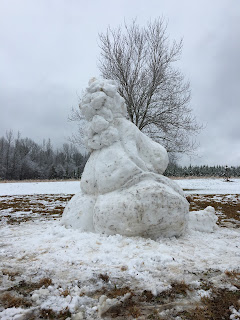 I think we went out around 8am.  The kids were in and out looking for dry gloves and socks and thawing out their fingers.  I worked on the snow sculpture and stayed outside.  I rolled snowballs as large as I could and tried to stack them into a mass that I could carve. 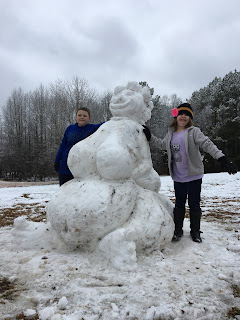 The stack of snow started to remind me of the Woman of Villendorf, one of the oldest known sculptures.  It's a tiny little carving of a curvy lady or goddess.  I turned my snow lady into a modern icy version with a comical approach.  Blue wasn't a fan and he spent a lot of time trying to convince me to put a "bathing suit" on her. 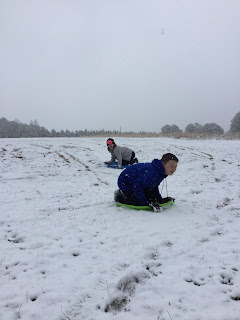 Because we try to be prepared for anything around here, we actually had plastic sleds and didn't have to resort to using cardboard boxes.  Our small hills forced us to run full speed and then try to jump on the sleds without toppling over.  I won the distance contest, but mostly just because I was the heaviest.  Moments later Blue jumped on his sled and it shattered into pieces. 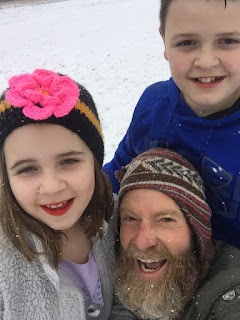 We made videos for Blue to use, made snow angels and against my better judgement the kids ate a lot of snow.  The Kool Aid juice they used for the red lips on their snowperson made them think of snowcones so they started scooping up snow and pouring juice or drinks over it.  Violet's lips are intensely red because of that. 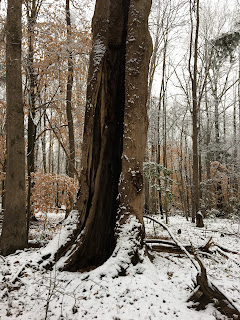 We stayed out until about 1:30pm before realizing that we needed to dry our clothes and thaw our bodies.  We let G rest for an hour or so before we headed back out to go exploring. 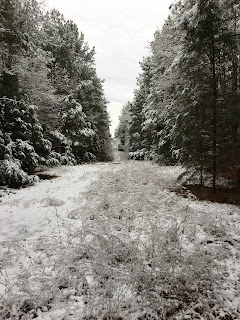 When you only see snow once or twice each year, it never looses it's magical appeal.  The quiet that falls over the snow always catches me off guard.  The white coating transforms every mundane object into something new.  We walked through the woods marveling at it all. 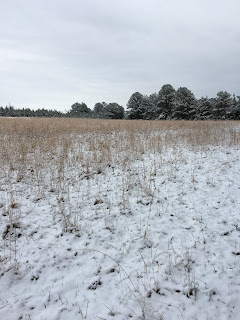 Even the front yard took on a new appeal.  The final sled battle took place in our cold, wet clothes just before dark.  G had some warm chili and cornbread ready when we went inside. 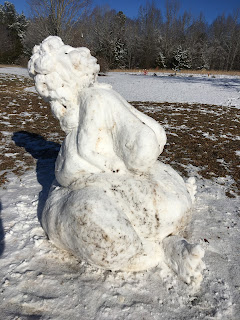 The kids' school announced they'd be closed Thursday as well.  My morning studio class was cancelled but I still had to go for the afternoon class.  That was good enough for me because I got to sleep until sunrise and run in the daylight.  The kids and the dogs played in the snow before I left for school and the kids apparently played outside all day while I was gone.  When I got back home both sleds were in pieces.  There were random pairs of wet gloves scattered across the yard.  The roads were clear around us but the schools quickly began canceling for Friday.  Every announcement built confidence with Blue and Violet that they'd get another day off.  Then came the devastating news:  the two hour delay.  They would get to sleep in a little, but they'd have to go to school.

And just like that, the snow vacation was over.  We're still watching the snow creatures melt.  The last patch of shaded snow in the back yard melted today.  Looking back, the weather folks did ok.  They were at least close with their predictions.  The local power company has taken precautionary measures against trees falling on lines for the last several years, with a serious tree trimming operation each summer along the power lines.  Even the road crews were on the ball, pre-treating the roads with brine for days in advance of the storm.  That's not to say some people didn't lose power or that there weren't goofballs out driving like idiots on icy roads, but at least we're not the dumb hillbillies the rest of the country makes us out to be in the snow.

If you're wondering what we do with all that milk and bread, I used my milk to make cappuccinos and my bread for peanut butter and jelly sandwiches.

It's not likely we'll get another snow this year but that won't stop the kids from hoping.  As for me, I'm over winter.  I'm ready for the beach.