oops we did it again

The last beach trip of summer is done.  It felt like the days flew by but when I think back on the events of the week, we packed a lot of stuff in those 7 days.  No wonder we were tired when we got back home. 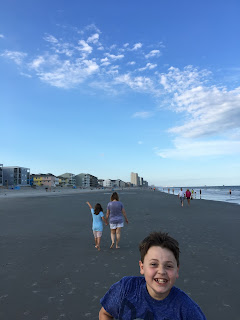 This photo pretty much sums up the week.  First, we have to talk about the weather.  The humidity was very low and there was a stiff breeze just about all week.  The temperatures were wonderfully comfortable.  Violet wore a jacket just about every morning.  Normally in August you sweat just from walking outside.  This week was a welcome change from that.  I only sweated when I ran each morning and a couple of days while I was sand sculpting, and if you know my Olympic level sweating, you understand how odd that is. 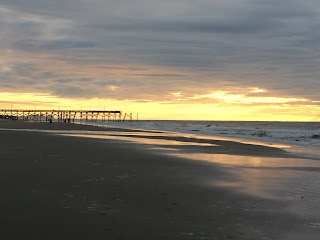 Beach days start early.  My internal clock gets me up just before sunrise almost every morning to run.  At home I can't drag myself out of the bed before 7:30 but beach rules are different I guess.  There were some great sunrises this week and more and more people seemed to be out each morning taking sunrise photos.  I ran through as many of them as possible.  I figure hundreds of people had to delete photos of some bald buy running through their pretty sunrise this week.  That photo shows the still damaged Surfside pier. 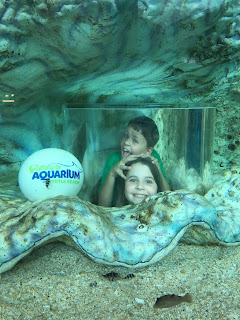 We got cheap admission into the aquarium.  Blue had been before he was old enough to appreciate it.  Violet had never been.  They both loved it.  We touched stingrays and sharks and jellyfish.  We marveled at the sharks.  Violet got to talk to a mermaid. 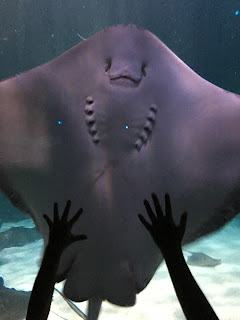 Stingrays look funny from the underside.  I guess humans do too.  The beach inspired the very first Buttdrawing Monday last year and with the addition of Belly Busting Bonanza drawings, there was a lot to look at on the beach.  With the late summer crowd crammed onto the thin high tided beach, it was like having hordes of free models.  I did a little drawing, a little writing and a little reading. 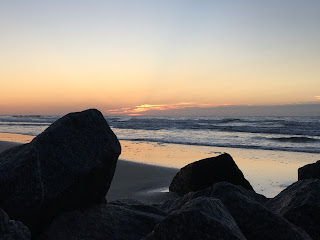 Early this summer I read Rob Bell's book, "How to Be Here".  It was pretty inspiring and generally good.  I downed another couple of books and finished one last week just before leaving for the beach.  On our first day I was able to snag Bell's latest, "What Is The Bible?"  It was really interesting and thought provoking and I finished that one before heading home.  Maybe you'll read it and we can discuss. 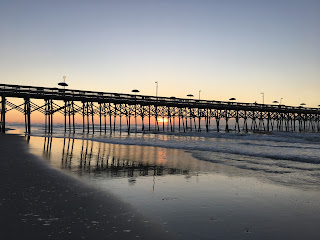 Overall, happiness ruled the week.  We ate well, had free fireworks every night, and laughed a lot.  Violet and I even did yoga on the beach with total strangers one day.  There was one incident though.  While helping the kids try to save a sand castle from the approaching tide on Wednesday, a wave splashed salt water onto the pocket of my swim trunks.  My phone was in that pocket.  I took the phone out, wiped it off and put it in a towel.  It still worked.  Worked the rest of the day too.  But when I got up the next morning to run, the phone was having none of it.  Wouldn't open the running app, wouldn't take a photo of the best sunrise of the week, wouldn't do anything.  Then it went black and stayed that way the rest of the week.  It lived in a bag of rice until yesterday when I dropped it off at a fix it place.  If you'd cross your fingers for me on that I would appreciate it.  I don't believe in phone cases (Steve Jobs did not have the iPhone designed so minimally only for you to screw it up with a bulky case) and if given a choice, I do not believe in insurance.  With that in mind, having my phone on the beach at all was probably not very smart.  In my defense, I've had a case-less iPhone since the iPhone 3 and while I almost lost one to the Ravenel bridge in Charleston, I've never cracked a screen or submerged one.  This put me on an involuntary phone ban which was kinda nice.  I'm sure I've missed some text messages this week and if it was you, I apologize.  If I ever get my phone back functional again, I'll respond then.  In the meantime, email. 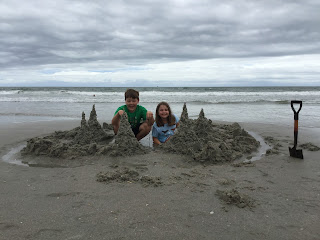 Sand is everywhere.  As tourists, we don't know the tricks to keeping sand out of the house.  It's on the running shoes, the beach bag, my feet every night as I get into bed.  Somehow it's on the counter and the TV remote.  But it's also all over the beach and it packs down and stacks up so nice.  We enjoy the sand as much as we enjoy the water.  We made a few drip castles and we made a new sculpture each day. 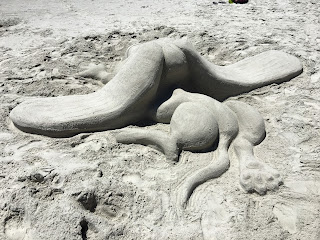 Spending a week in the same general area as several other families allows you to recognize their faces.  By mid-week you speak and wave as you pass.  This is as much social interaction as I want on any given day but on day two of sand sculpting people start talking to you.  Mostly they're kind enough to wait until you're done.  The best part is watching the beach walkers from the comfort of your shaded beach chair.  They don't know you made it so you get to see a true reaction.  First there's the double take.  Then they slow their pace and take it in.  Some will stop completely.  Some will turn around and walk closer.  Many will take their phones out and make photos.  (They have their phones on the beach and no one is giving them crap about it.)  But the one thing that almost all of them do is smile.  This is becoming an important thing for me.  I want to make strangers smile just for the sake of making them smile. 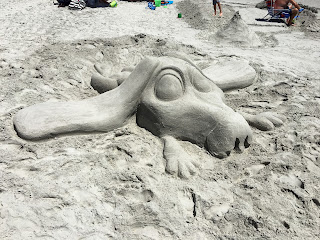 Throughout the week people would check in each day to see what I made.  Some would make the walk from several buildings away.  One lady came down from her "sick bed" just to see what I built that day.  Another lady checked in every single day, taking photos and sending them to her friends on Facebook.  A little girl came over each day to ask what I was going to make and she'd come back later to tell me how she thought I did.  Several people around us made their own castles and sculptures.  It all brought a little joy to our little part of the beach.

And all that digging and working helped keep the pounds off while we ate our way through vacation.

One more week of summer break before going back to the real world.  We don't have a beach here at home but hopefully we'll have some fun adventures before I have to start setting that alarm clock and wearing pants again.
Posted by e-sketchbook at 8:02 PM