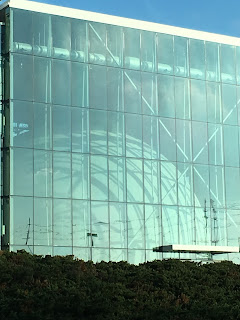 Last Friday was College Art Day at the South Carolina State Museum in Columbia.  Each spring, the museum creates a cool day for high school art students.  They get to take a field trip to the museum, see free art exhibits, shop around the art departments in the state and hear from professional artists who went to school in South Carolina.  It usually falls on the Friday before our spring break, so I round up a group of art students and we do a little recruiting and have a lot of fun. 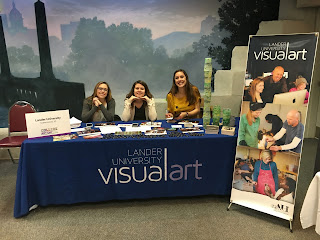 This year I invited Drinkwater, Metal Megan, Molly and Scarlett.  Scarlett came up feverish that morning so we ditched her.  This is a student led event so I'm really just there to carry the box of stuff and to make sure they don't get arrested. 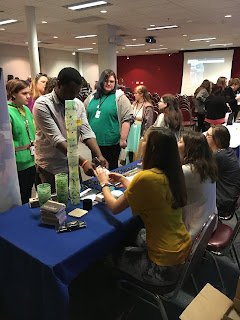 When the high schools arrived the students streamed in and gathered around our table.  We had the best free stuff and we were having the most fun.  We gave away cups, buttons, sketchbooks and stickers. 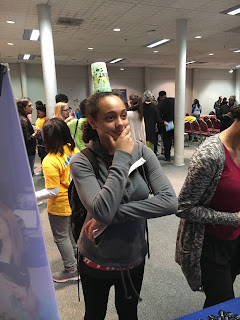 We had special gold stickers too, but if you wanted one of those you had to earn it by doing something strange and letting us post a photo of it on our department Instagram account.  (landervisualart if you're interested)  This young lady balanced a free cup on her head. 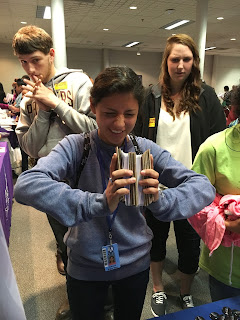 This young lady crushed a stack of sketchbooks while the people behind her tried desperately to figure out what was going on at this table.

This year the Skype interviews with professional artists was particularly interesting for us.  The first one was Lia Newman, who I had a sculpture class with back in grad school.  The second one was Vitaly Odemchuck, a Lander grad who works for Weebly out in San Francisco.  He praised the Lander art department and Professor Slagle.  It was the coolest commercial we could have had. 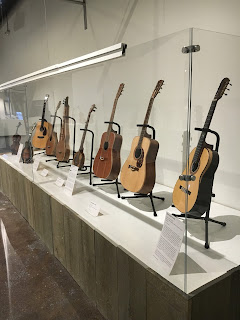 When the recruiting was over we took our team down to the gallery to see the "Carolina Makers" exhibit.  It featured creations made by artists and artisans who live in the Carolinas.  I was particularly fond of the guitars and mandolins. 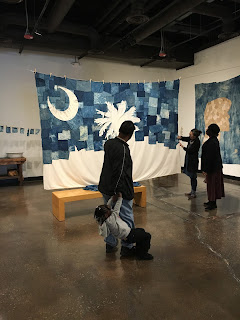 Oh and Leigh Magar's hand died, hand sew flag was very cool too.  She was working on it while people came through the exhibit. 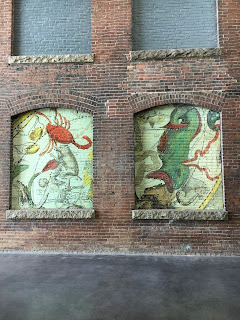 The museum is a very cool place.  They've done such a great job with it.  There's a series of cool old style constellation illustrations on the old mill windows outside the planetarium. 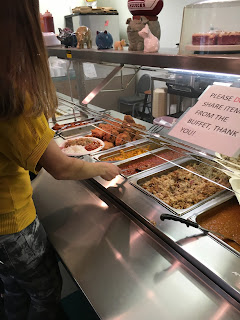 We picked at our provided lunch sandwiches but made sure to save room for a real meal afterwards.  My heart soared when they said they wanted to eat BBQ for lunch.  We mapped the closest place with 4 stars and convoyed there.  Sadly, mustard based sauce is king in the midlands.  I'm not a fan of mustard of any kind, but I am a fan of the BBQ buffet at the Palmetto Pig.  If you're willing to go with the "hot" sauce, it's more of a vinegar base and while it's very warm, it's also very good.  So were the beans and mac and cheese...and the banana pudding.  My team ate like champs.  We all had at least two plates full before dessert.  I was so proud. 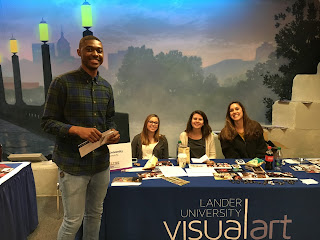 What could be better than a BBQ buffet?  Well, not much, that's for sure.  But I'll tell you, KJ Campbell is.  KJ is the coolest.  I had the pleasure of teaching KJ during my first semester at Lander.  I think I may have taught him every year during his 4 years with us.  He graduated 2 years ago and now works as a graphic designer at WIS-TV in Columbia.  When he heard we were in town, he zipped over to the museum to see us. 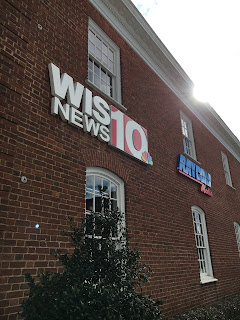 We caught up on things and chatted a while and then he invited us to come over to the TV station for a tour. 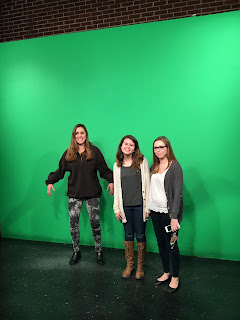 I'm not a fan of TV or TV news usually, but I have to admit this was pretty cool.  He took us right into the on air studio while someone was taping a thing for the news.  We tried to be quiet.  Then we got to go down to the desk and the green screen and goof around. 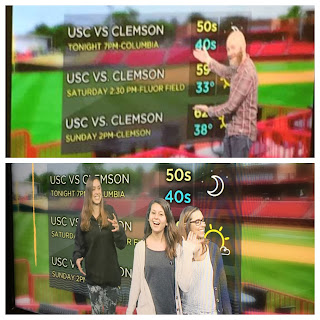 We met the weather dude and while I'm sure he's terrific at his job, I think he best be on guard because we were pretty awesome weather people too.  Look at me up there, I'm a natural.  I hear the camera adds 10 pounds to your beard. 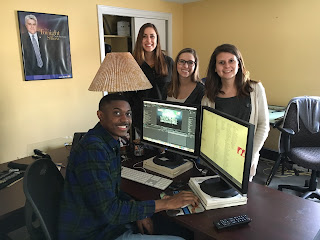 After our tour we went up to KJ's office and he showed us some of the graphics he's worked on there.  He showed us his very first moving graphic and then he showed us the cool new one he made for severe weather week.  I was amazed by both but the new one was really great. 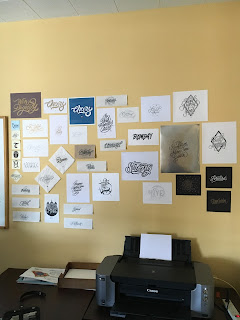 KJ is a master of hand lettering.  This is what he does in his spare time for fun.  His office wall showcases these hand lettered quotes done on napkins and scraps of paper.  They're really wonderful.  Metal Megan and Drinkwater are graphic designers and they were awestruck.  Before we left, KJ told us he wanted us to all choose a drawing to take home with us. 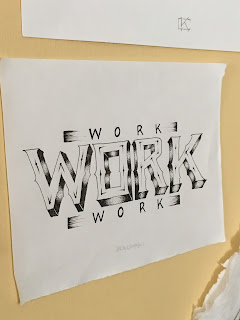 My choice was easy.

Thank you KJ!  You rock.