the summer of waterfalls: fourth installment

Summer is slipping away.  The kids go back to school and regular life schedules in just over a week.  The Summer of Waterfalls will have to wrap up soon.

But we will go out with a bang, not a whimper.

This week I used my waterfall guidebook and my map skills to locate several waterfalls in one area.  We have to drive a considerable distance now so we needed to make the most of our gas money.  I located 6 near Brevard, NC, got the kids up early, made some lunches and we headed out on a long adventure.  The adventure was made even more adventurous by two tiny disasters that happened during the day.  The first disaster didn't wait long to spring on us.

I cut 30 minutes off our travel time by driving up Hwy 276 through Caesar's Head.  The road literally climbs a mountain through a series of switchbacks.  G and I both get queasy on curvy roads unless we are driving.  The kids are always fine.  Since G had to work, I took the curvy road.  About a mile from the top of the mountain and the picturesque overlook, I heard that sound from the backseat.  If you're a parent, you know the sound.  If you're not a parent, man oh man, you will get to know the sound when you have kids.  It was the sound of your child throwing up inside your car.

It's always a little different but you know it instantaneously each time.  There's no mistaking the sound of puke on your upholstery.

G and I talked about it afterwards and as best we can remember, Violet has yakked only three times in her life.  Two of those three times she has managed to yak inside my truck.  I guess I'm just lucky that way. 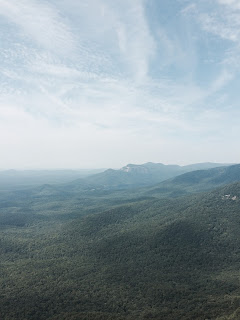 I'm not good with puke.  I figure no one is.  But we definitely needed to stop at the overlook to regain our senses.  And to clean up in a sink because I'm not smart enough to take my kids a change of clothes.  When the kids get wet on these outings, there are always towels in my truck to sit on.  Those towels got an early workout with the "incident".  Ever the problem solver, I proposed that Violet bathe in a waterfall and we'd get her all cleaned up so no one would know she had vomit on her shorts.  Off we went to the first waterfall of the day. 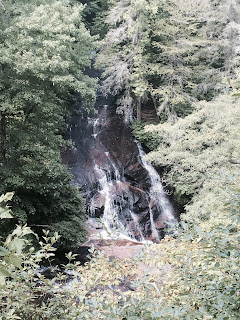 Connastee Falls was tall and impressive, but I object to viewing waterfalls from the top.  You have to be able to look up to them for the full majestic effect.  This one is only viewable now from the very fenced in observation deck.  The kids were not impressed.  They're sorta waterfall experts now and this one just didn't deliver what they need. 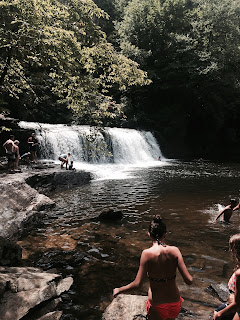 A short ride later we were in Dupont State Forest.  Our first waterfall hike was a short one to Hooker Falls.  This was my first visit to Dupont and I was surprised by how crowded it was.  The parking lot was so full we had to lurk for a space.  The short hike to Hooker Falls was easy enough for everyone so this place was teeming with humans.

There were millions of signs posted asking people to not climb the waterfall and I'm trying to teach my kids to respect nature and the reasonable posted rules, so we stayed back at the swimming/wading area.  There were plenty of rocks there and lots of shallow water to keep Blue and Violet happy.  This was when tiny disaster number 2 occurred.  Blue lost his balance jumping from rock to rock and went horizontal in the shallow water.  He recovered quickly but I think he only managed to keep a small spot on his shoulder dry.  His pants, hair, and 90% of his shirt were soaked.  He came up laughing and walked over to me and that's when I noticed the rectangular box with rounded edges in his pants pocket.  He forgot to leave his iPhone in the truck when we got out to hike.  (No, my 8 year old does not have a cell phone.  He inherited my old iPhone a year ago and it works for him like an iPod Touch.)  He lost his laugh quickly and the sadness started.  I put the phone in my dry pocket and told him to say goodbye to it. 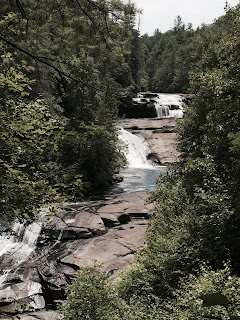 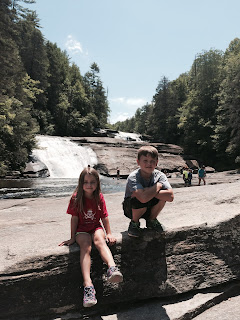 We stopped at the middle one and carefully and slowly ate our lunch. 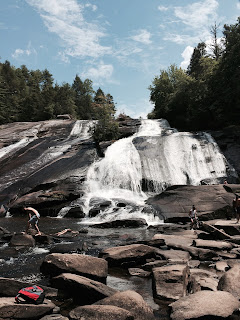 Our dessert was this beauty, High Falls.  This one was much farther up the trail but very worth the hike.  It's a huge waterfall in height and width and there are enough rocks to climb on for days.  It is viewable from a distance but you can also walk along the rocks around the edge of the river right up to the base of the falls. 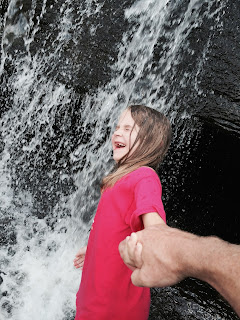 The water was refreshingly cool. 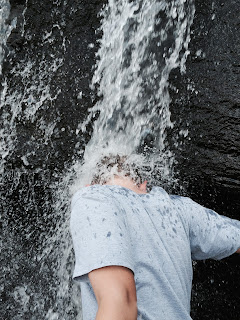 They both got to put their heads under the waterfall. 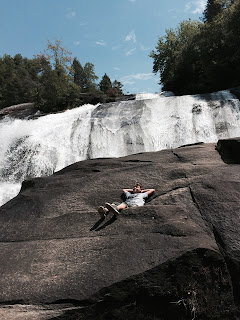 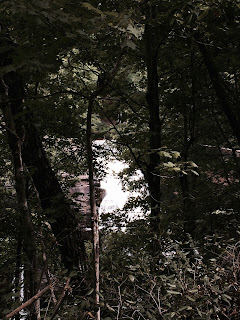 We had hiked about 5 miles at this point.  In the parking lot before we left, I happened across another roadside waterfall in my guidebook.  It was only three miles away.  We had to find it while we were there.  So three miles down a dirt road turned into 10 miles.  We missed it.  But we drove so far, we made it to a different waterfall that I did not plan to visit.  Lake Cascade Dam Falls.  The falls are created by a dam so I wasn't going to put it on our list, but since it was right outside our windows, I stopped and tried to find a good view through the trees.  The kids were not up for climbing down the steep embankment for a better view and I probably couldn't have kept them both safe doing that anyway, so this photo will have to do. 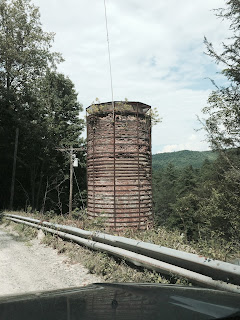 We saw this thing nearby.  No idea. 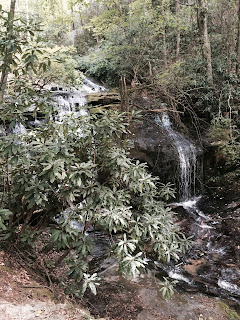 And since we are not easily deterred in our adventures, we opted to make a 7 point turn on the narrow dirt road and backtrack until we found Merry Falls.  It was a quiet but impressive little waterfall by the road.  The 8 waterfalls we added on this trip puts our total up to 30 waterfalls so far.

Back home and thoroughly showered, we pulled out Blue's phone and pressed the button.  It came on.  It's perfectly fine.  I know tons of people who have submerged their phones ever so briefly and every single phone has died as a result.  Now, every one but one.

Labels: summer, the summer of waterfalls