I've declared this the Summer Of Waterfalls.

Humans gravitate toward water.  I realize there's a survival instinct related to the primal need we have for drinking water.  That's probably ingrained in our DNA so much that even when we have free water dripping from our faucets, we still spend money for gas to drive to lakes and rivers to see water.  Lakes are cool but give me a waterfall any day of the week.  It can drop a couple of feet or a couple of hundred feet.  It can free fall or cascade.  Doesn't matter, I'll take it.  Falling water mesmerizes two legged creatures the same way that fire does.  It's just rocks and water but when the two are combined in the right way, it's magnificent beauty.

I love to hike and I can appreciate the beauty of the small things like roots, valleys, ferns, flowers and wildlife.  I've found, however, that I need some sort of reward for a long walk in the woods.  I need a panoramic view from the top or a waterfall.  And if we're honest, I have two small kids and if I'm going to talk them into putting down their electronics and leaving their air conditioned rooms, I need the promise of a waterfall.  I'd still make them go, but the waterfalls cut down on the amount of whining I have to hear. 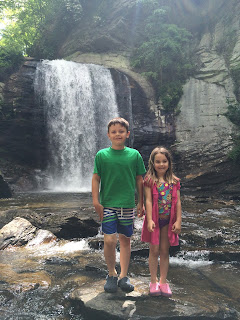 The Summer Of Waterfalls officially began in May when we drove up to Pisgah National Forest on a whim to see if we could find Looking Glass Falls.  The internet came through for us and gave us great directions. 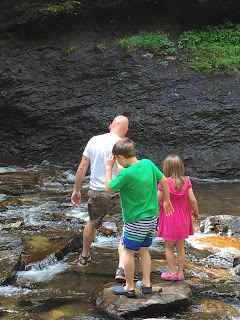 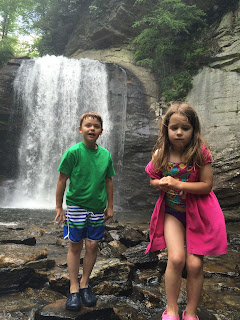 The internet did not tell us exactly how cold this water was going to be.  The amount of chilly water rushing over the edge caused a stiff breeze in the gorge and that combined with the mist from the falls was more than a little exhilarating.  Violet was not happy about this cold surprise. 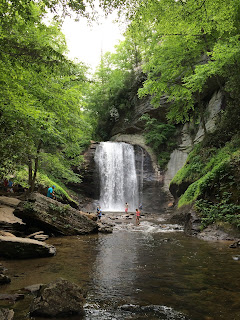 This roadside waterfall is very popular and having the humans in the photos helps give scale to the falls. 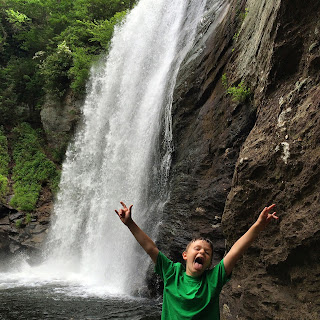 Violet got out quickly but Blue and I ventured across the stream through the foot numbing water. 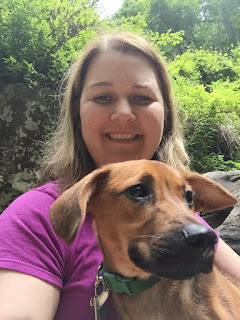 G stayed warm and dry with Timber and took photos of us getting cold and wet. 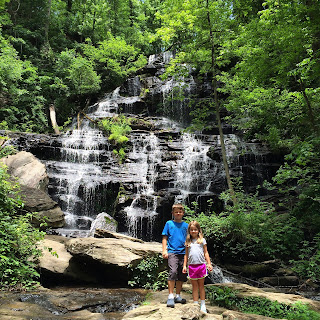 A few weeks later we decided to use our new waterfall guide books and find a couple more.  We found ourselves driving through Walhalla and we called up Stan and Robin to see if they wanted to go exploring.  Robin was out of town and Stan was in his studio looking for an excuse to not work...so he decided to join us and be our guide.  Our first stop was waterfall number 2, Issaqueena Falls. 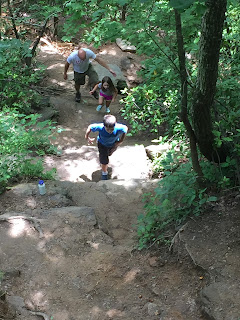 G got this cool photo of the kids and me coming back up from the base of the falls. 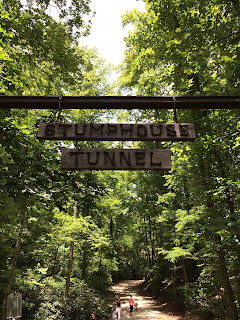 The Stumphouse Tunnel is right up the path from Issaqueena.  It's a tunnel that was started back in 18something and was carved through rock by hand.  It was never finished. 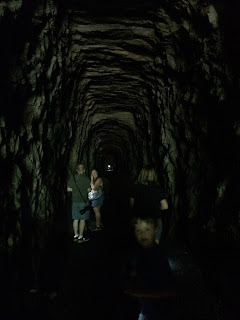 So it's a deep dark hole in the rock that needs to be explored. 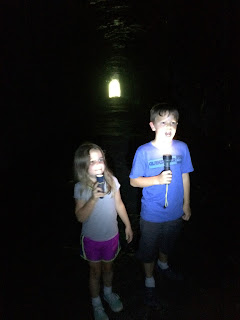 The McAbees were prepared with flashlights and we made spooky sounds to creep out all the other visitors. 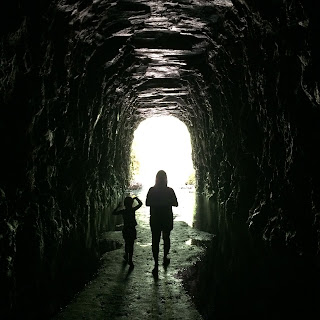 The air shaft creates a cool breeze that was welcome relief from the 90 degree heat outside. 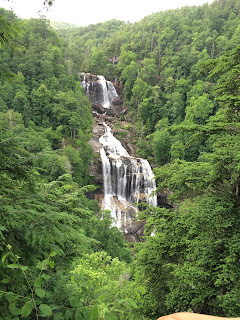 We checked in on the antique store in Walhalla, had a great pizza on Main Street and then decided to go in search of another waterfall Stan told us about.  This one is Whitewater Falls just in the edge of North Carolina and it was waterfall number 3.  This one drops 411 feet and is the highest waterfall east of the Mississippi River. 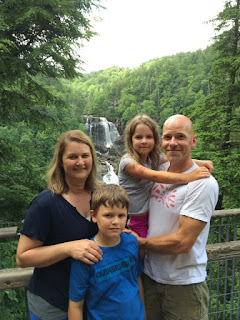 Stan got this photo of us at the observation deck.  Sadly, this gorge is so steep and dangerous the kids didn't get to climb on rocks or get in the water. 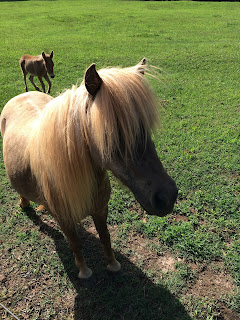 But because Stan is awesome and knows awesome people, we did get to stop by this farm on the way back to his studio.  These were miniature horses and donkeys. 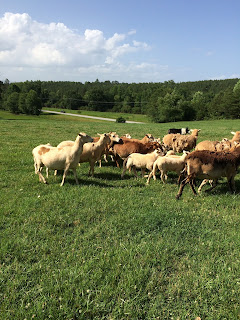 And these were sheep. 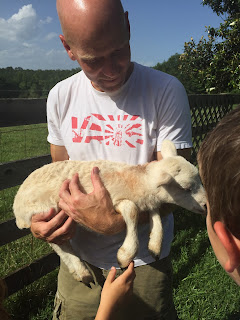 And we got to hold the baby. 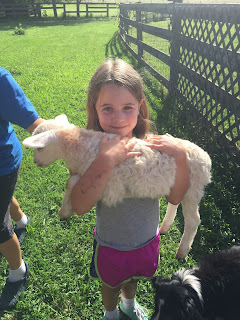 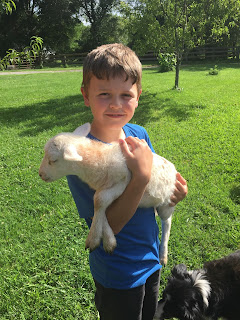 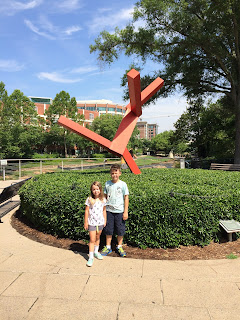 Today we had to deliver art to Greenville.  We stopped to critique Joel Shapiro's sculpture.  We approve. 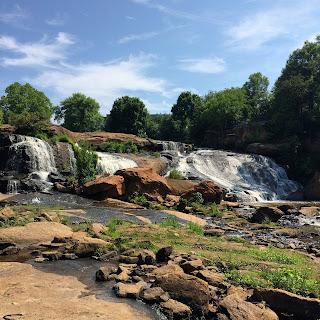 We also had to walk by Reedy River Falls in Falls Park to check waterfall number 4 off our list.  It's a really pretty waterfall. 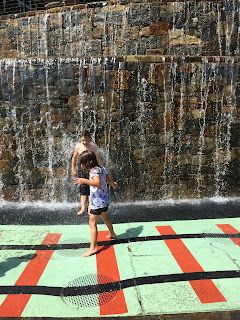 And since it was sweltering outside, I let the kids kick off their shoes and play in the fountain. 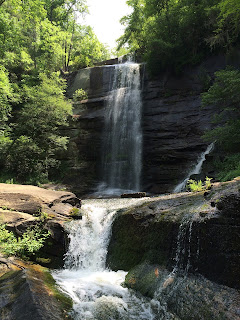 Then we drove out to Pickens County and found Twin Falls, waterfall number 5 for the summer.  This one is out there, but it's not a long walk and it's so beautiful.  This photo just shows one side. 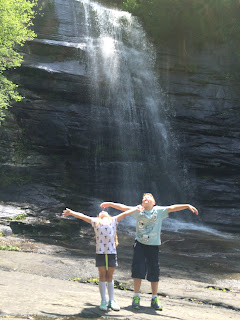 This was the side that was deemed safe enough for my crew.  We were able to get right up next to the falls. 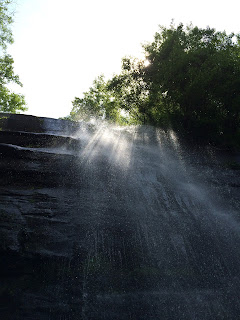 In person this sight was inspiring.  In photo I can see how that would not translate.  Sorry I'm not a better photographer. 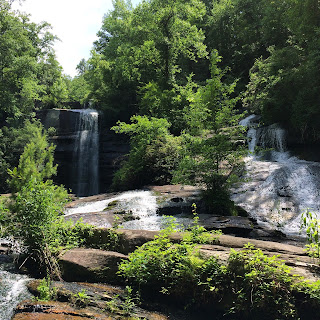 This shows both sides of the falls.  A really great place. 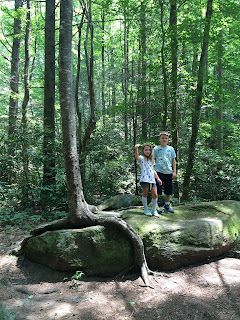 And the short walk provided plenty of time for rock climbing and adventuring. 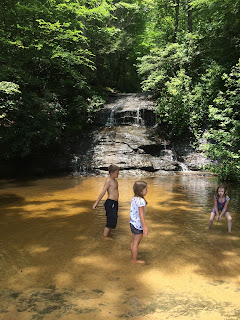 With Twin Falls behind us, we thought we were headed to Cook Out for milkshakes but on the way we saw this one by the road and busted a U-turn.  This was the lower level of Wildcat Wayside Falls.  A perfect little place for wading and playing. 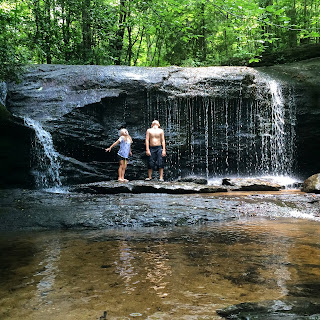 This one shows the upper level falls, also great for getting wet. 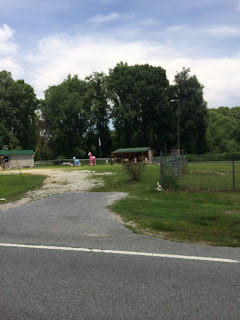 Then we were off to Cook Out, but not before we slowed down to see the two unicorns.

Labels: summer, the summer of waterfalls