The end of the semester brings loads of work and stress for students and faculty alike.  Apparently these are some of the ways we cope... 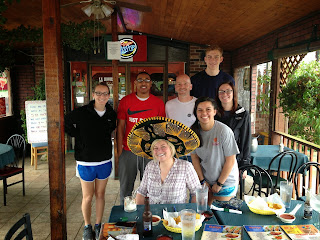 Singletary had a birthday.  For months we planned and schemed to lure her out to one of the local Mexican restaurants for a celebration.  And by "months" I mean we literally planned this while she was on the way to the restaurant.  We made a birthday card out of a napkin and made her wear the birthday sombrero while the staff sang to her.  Chelsea, Armir, Asger, Lindsay (Buttermilk) and Elizabeth(Mini Me) all had Singletary and me for classes this year. 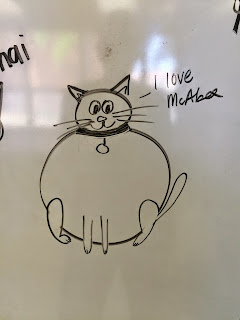 My whiteboard is like it's own little micro-Twitter.  People post things there to be read by everyone who enters the room.  My hatred of cats is well known.  This was one of several cats that appeared during the last two weeks. 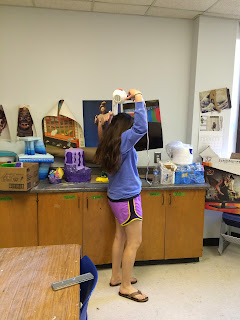 This is Sydney (Syd Vicious).  One morning I walked into class early and witnessed her using the class hair dryer to dry her hair.  Yep, that's Syd. 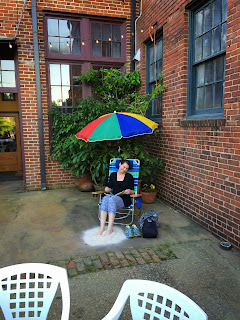 One of the cool things our department does each year is a spring cookout for the students.  It's always at the end of the semester when stress is high and deadlines are looming.  This is a fun thing we can do to get everyone's mind off the work for a few minutes.  Esnipes was ready for the beach so jon made her a mini beach to enjoy. 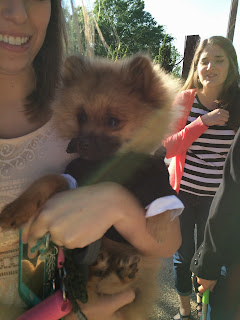 We declared the cookout to be "black tie casual".  No one had ever heard of this so it was open for interpretation.  This little guy came dressed in his tuxedo.

Pano shot of the entire group. 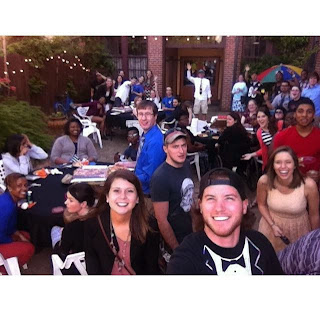 Everyone was taking photos.  Megan brought her selfie stick and James got this one of most of the group. 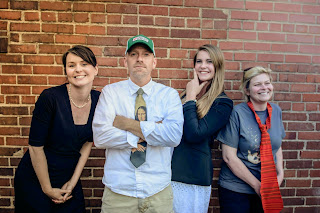 I think these photos came from Oscar.  Esnipes wore a little black dress with pajama bottoms.  I wore my Mona Lisa tie with shorts.  Singletary wore the giant tie I made for Gumby a few years ago.  Kaitlin joined us to pose for Oscar. 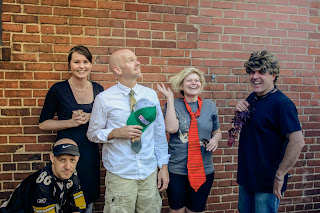 Jim wore his black tie with his Steelers jersey.  jon never misses a chance to wear a wig.  And he had lime green furry boots. 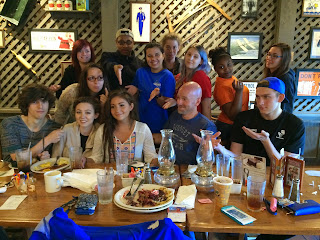 I offered to let my first early morning exam bring food to the studio clean up time.  They had a better idea.  They suggested we clean the studio and then adjourn to Cracker Barrel for a quality breakfast.  Since this was our last meeting together, we took over one side of the restaurant long enough to poorly reenact Da Vinci's Last Supper for a photo.  Kristen (Dread) played the part of Jesus.  The disciples were James, Haley, Sam, Taylor, Armir, Buttermilk, Jessie, Jamie, me, Jamea, Asger and Mini Me. 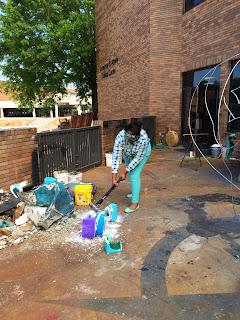 Clean up day often provides stress relief.  When students consider the possibility of moving their projects home or trashing them, the idea of smashing them with a hammer usually sounds pretty good.  Jamaica was one of the happy hammer-ers this time. 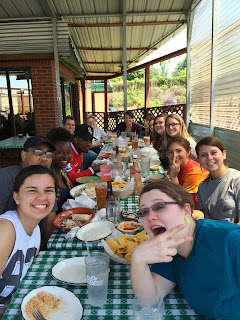 We dug holes for the better part of last week to install public sculptures.  I'll have to tell you about those later.  But while digging one of the tougher ones (or having Olivia dig it) I got a call inviting us to lunch.  I told Olivia to dig faster and after we wiped the red dirt off our clothes we dragged Megan out of the sculpture studio and met the rest of the group at a different Mexican place. 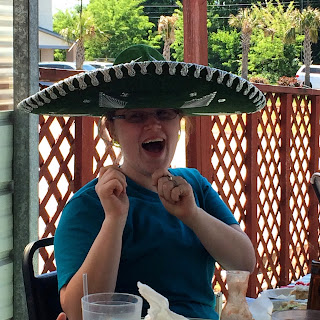 I told Olivia about Singletary's Mexican birthday the week before and she confessed that her birthday was in two days.  So we quickly went to work on a napkin birthday card.  Singletary found an old AA battery in her purse so we wrapped that up as a gift.  She also got the sombrero and song treatment. 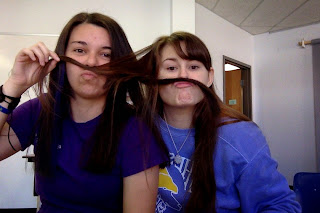 And you know how teachers bring their laptops in to give a presentation and the students respect the privacy of the teacher and do not bother the laptops while the teacher is helping other students?  Yeah, me neither.  When I walked into the next room Buttermilk and Syd Vicious stole my computer and launched Photobooth. 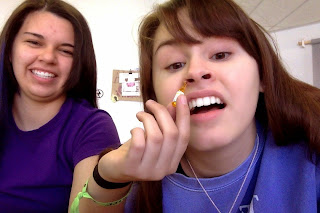 Sadly it took a week for me to find the huge series of photos they left for me. 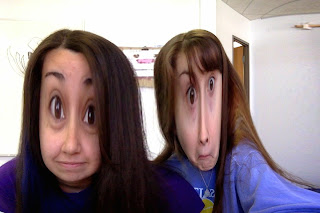 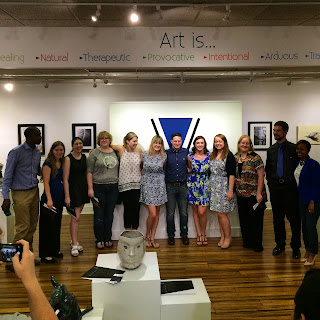 The Senior Show reception was a big, roaring success.  We took photos of the group for 10 minutes.  After each photo we realized someone was missing.  I think this was the last one so hopefully everyone is in it.  There's Sam, Jessica, Rachael, Emily, Cassie, Logan, Hunter, Stacy, Paige, Boddie, Daniel and Mia. 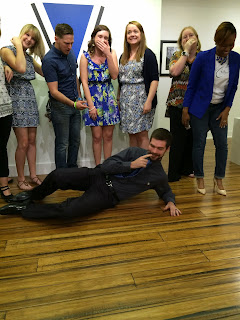 After that many photos things started to get weird. 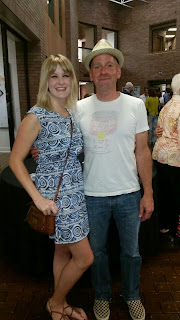 Almost as weird as my hat.  Or Logan.  (Just kidding Logan!)  I'm going to miss all the funny things you say.  Especially when you don't know they're funny.  And for the rest of you who are not Logan, we know that she'll read this because she's a known internet stalker!  Kidding again Logan.  But I will miss you. 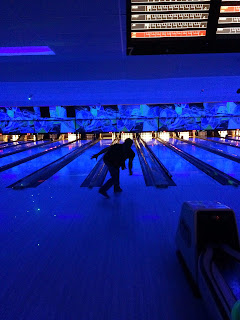 jon holloway is amazing.  We all know his photography is award winning and life changing.  We all know he's super smart and he has Olympic level social skills.  But did you know he's a world class bowler?  Check out that form.  After our year end faculty dinner the other night he gave us two choices.  We could all jump a train or go bowling.  Bowling was fun. 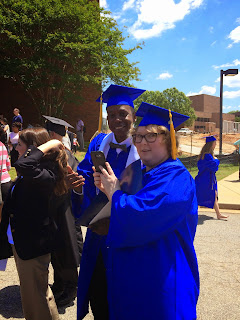 The next morning it was time to see this group of seniors off. 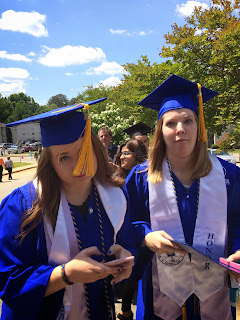 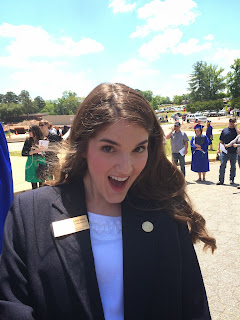 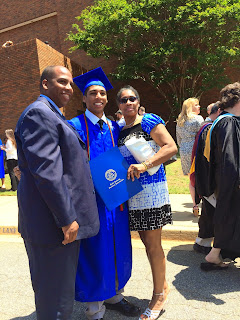 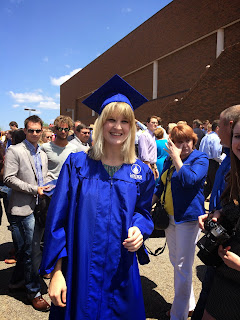 Another proud parent behind Logan. 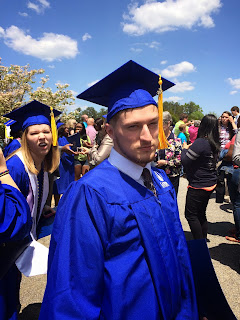 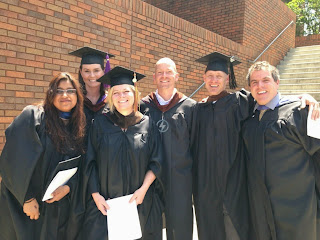 The art faculty dream team.  Minus Chrystine who was saving us a spot at The Dixie for lunch. 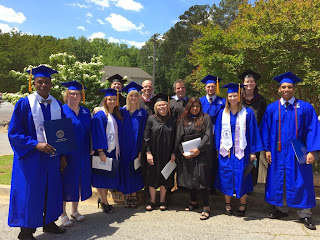 And almost everyone in all their royal robes.  Good luck y'all.  Come back home anytime to visit.