What's worse than running a 5k race?  Running a 5k race while sprinting away from zombies who are trying to kill you.  Brother Daniel called me a while back and told me I had plans for November 3.  He said something about zombies and a race and it sounded like fun to me.  With the cooler temperatures it's running season and we normally try to sign up for some races during the fall and winter.  We read over the website and read things like "there's a reason they are called the walking dead" and we assumed we'd be running a race through fields of old school zombies.  No big deal.﻿ 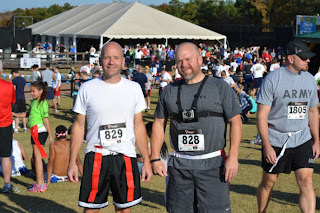 That's us still in our blissful ignorance just before the race began at Heritage Park Amphitheater.  Can you tell we're brothers?

The red things hanging around our waists are flag football flags.  Each runner was issued 2 flags and the goal was to finish the race as fast as possible with at least one flag left intact.  Runners who finished with no flags were "dead", killed by the zombies and would not be eligible for prizes or awards.  These little things are held on by a small spot of velcro and when you run they tend to hang in the air behind you like a little red zombie handle. 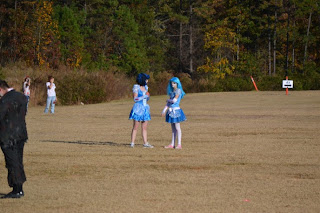 Georgie and the kids went to watch the spectacle.  They were able to hang out at a couple of places along the course and watch as the zombies tried to eat us.  These two blue zombie girls were in a field of slower zombies right at the start of the race. 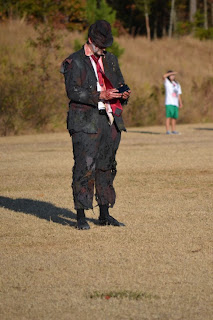 Apparently zombies are still plagued by smart phones as they walk the earth.  Perhaps he's checking his Apple maps for "brains nearby".  Not sure how Siri would respond to that. 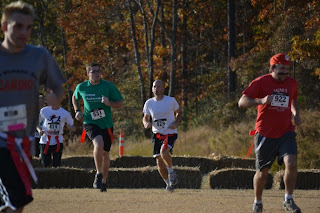 Here I am entering the "field of screams" where zombies started hobbling toward us.  Some of these people really took this seriously and had great costumes and makeup.  Most of them stayed in character during the race. 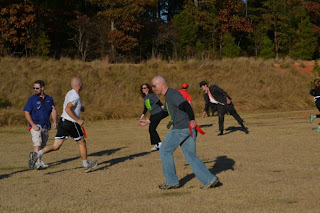 That's me navigating my way through the slower zombies.  This was about 50 seconds before I realized just how hard this race was going to be. 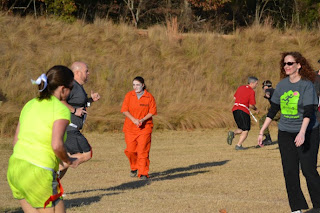 Brother Daniel makes his way through the slow zombies.  You can see that the zombies are living up to their "walking dead" name. 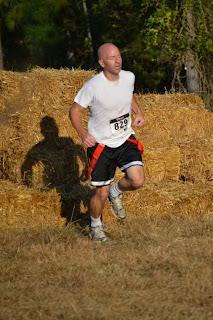 After clearing the first hay bale pyramid obstacle (did I mention there were also obstacles?) the look on my face tells you how I'm feeling.  I should explain a couple of things here.  First, I run 5 kilometers every day.  It's never easy, but I'm used to it and I can do it most days without feeling like I'm going to die.  I have a comfortable pace, lots of peace and quiet and I just do my thing.  Second, back in my day we had slow zombies.  My friend David L and I snuck into Night of the Living Dead at the theater when we were teens and we mostly laughed through the slow motion terror of zombies.  I think this was one of the first remakes of the really old Night of the Living Dead movies and by the time they started remaking them again a few years back, apparently slow zombies were not good enough for the MTV kids.  Fast zombies starting racing across the screen because they were scarier.  I didn't see those fast zombie movies so for me, zombies are supposed to bumble around looking for brains until some punk with a mohawk pops them in the head with a baseball bat.

So here was my problem:  Just before the hay bale pyramid I had my first real life encounter with fast zombies.  They would jump out of the woods and sprint toward me.  Keep in mind I've been running for several minutes now and all of the sudden I had to run as fast as I could from some very quick teenage makeup artists.  Way too much sprinting and fast zombies.  This was going to be painful. 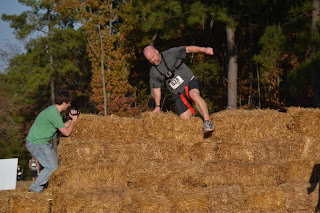 Brother Daniel cleared the pyramid with both flags still intact.  He was just as tired and just as troubled as I was. 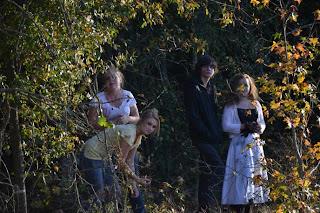 If you look closely you might note a slight age difference between most of the zombies and me.  To the tune of 20-30 years.  Lucky for me most of them have been playing video games most of their lives instead of exercising. 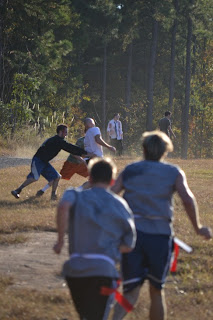 The bald guy in the white shirt in the center is me.  I'm being accosted by 2 fast zombies and I'm trying to zig zag my way through them.  I'm pretty sure one of these guys got one of my flags.  This was getting close to the halfway point of the race and the zombies started getting faster and more blood thirsty.  This was a long uphill stretch with woods on one side and a barrier on the other, trapping the runners in a narrow lane.  Uphill was bad enough but with the extra zig zagging at full speed, my heart was starting to plan a revolt.

Later in the race I almost lost my second flag to a lightning fast 12 year old girl.  At that point I was one of the first runners to encounter the zombie zones.  This one featured a sea of young and eager zombies and I swear this little girl was faster than me.  I gave her my best football moves and she was steady gaining on me when I dove head first under the next obstacle.  I heard her shouting to her friends that she had my flag in her hand twice and couldn't pull it.  I had to crawl on my hands and knees for several yards under a black tarp and I was happy to find my flag was still attached when I got out.

A long stretch followed and I had no idea if I was still on the course.  I had to ask a couple of volunteers and they seemed just as unsure as I was.  This seemed odd to me, but I kept running.  I wasn't sure how much farther I had to go but I rounded a turn that was marked again and I was jumped in a narrow gate by at least 3 zombies.  I raced past the first two and the third one ran me into a fence.  I ducked under his grabby arms and realized this was the finish line. 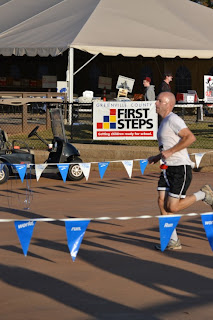 All the spectators were gathered here and realizing everyone was watching, I turned on all the speed I had left so I wouldn't look like I was about to pass out.  Apparently I was the third runner to finish the race and the first one to finish "alive" with a flag left.  Don't get excited, my time wasn't that great, I was just in the top of the first of 4 staggered starting groups. 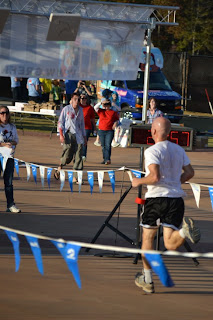 My official time was 25:57.  Georgie thought it was 21:57 and since I was too distracted to look at the clock beside the finish line I felt great about myself for a little while. 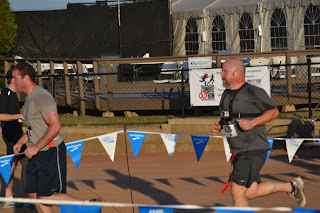 Brother Daniel finished soon after and also had his flag intact.  He had the exact same experiences with zombies.  We realized the key to doing well was to run in the later starting groups.  We saw the young cross country teams starting at the end and using the slow movers as blockers to keep them away from the zombies.  We also saw a runner dressed up as a zombie.  Genius. 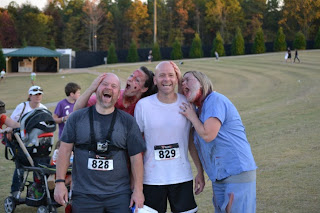 So our times were not great but we both survived the zombies and we had a blast.  Georgie and the kids enjoyed it too.  So much so, that they want to be zombies next year.  After the race we were photo bombed by zombie nurses.