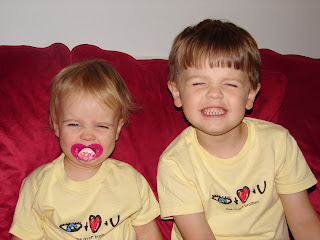 Looks like the kiddos were happy about their Avett Brothers "I and Love and You" T-shirts. Blue heard his first Avett concert from the womb and saw his first one before his first birthday. Violet is terribly jealous but just as happy about her shirt. 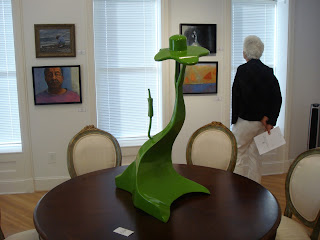 That's Lucille on the table. While we were at concerts last weekend, she was working. Saturday night she was awarded 1st place in the sculpture division at the 37th Annual Juried Exhibit sponsored by the Spartanburg Artists' Guild. She'll be on display at Carolina Gallery, 145 W. Main Street, Spartanburg through September 18.
There will be more sculptures and drawings making appearances around the country over the next few months:
*Sept 12 - Oct 15, 2010 - 19th Annual National Juried Exhibit, Art Institute & Gallery, Salisbury, MD
*Sept 14 - Oct 10, 2010 - "Sculpture in the 21st Century", Towson University, Towson, MD
*Sept 17 - Oct 15, 2010 - "A Sense of Place 2010", National Juried Exhibit, Gertrude Herbert Institute of Art, Augusta, GA
*Oct 1 - Nov 15, 2010 - "Without A Map" National Juried Exhibit, Northbrook Public Library, Northbrook, IL