Last year when we had some snow my son and I made a pregnant snow mom portrait. My wife didn’t think it was quite as funny as we did, but it was awesome. A few weeks ago we had some snow and ice and he and I made a regular 3-tier snowman. He was only 2 ½ when we made last year’s so I was surprised when we finished this one and he announced that it was nice but not as good as the last one. He noted that this one needed legs and a big ol’ belly. He’s very animated. I explained that the ice/snow mixture was not good for snowman making and I assured him when we got some good snow, we’d make something better.

Last week when the good snow started falling he could hardly contain himself. He couldn’t wait to get out and make something out of the snow. So last Saturday morning we feasted on bacon and headed out to make something. We just couldn’t figure out what it was.

At first he wanted a snowman, so we started on that. 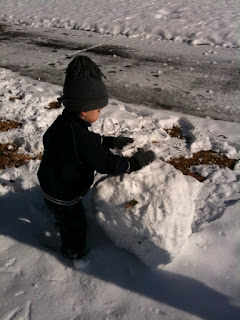 Then he wanted a snow castle so the pile of snow got bigger. 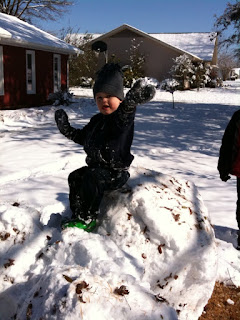 Then he wanted a monster. Then a ship. Then a hippopotamus. It was a mess. Our neighbor came over to help with the huge pile of snow and after a couple of hours I had to make a decision on what this thing was going to be. 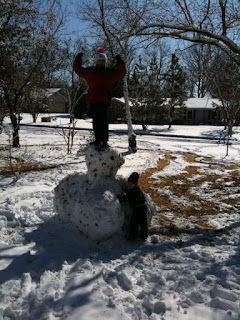 I know this is weird, but at that point it sort of looked like some cartoon animal riding a little car. We all agreed and began to work in that direction. 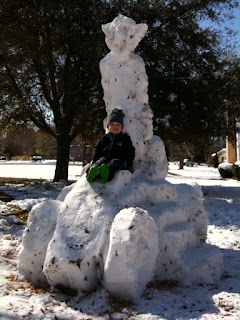 Snowcar with bear, stairs, and Blue 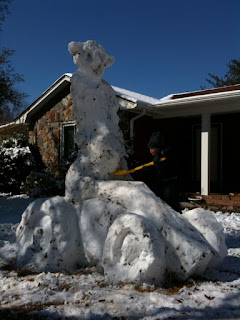 Soon almost all the snow cover from our yard was gone and the behemoth was finished. We spent about four hours out there and by the time I dragged Blue inside his feet and legs were….well, they were blue. Peanut butter and jelly seemed to fix that.
The problem is that next year he’s going to expect us to top this.
Posted by e-sketchbook at 2:49 PM