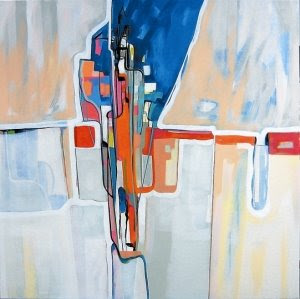 "Italy Series Village I" by Marge Loudon Moody
A few weeks ago I had the opportunity to attend an artist lecture given by Marge Loudon Moody, an abstract painter living in South Carolina. I was impressed by the straightforward approach Mrs. Moody took in addressing her audience in a small gallery setting. In such institutional environments it is not uncommon to hear artists wax poetic about the lofty goals they have for their work and to fill the air with large vocabulary words and references important only to those who may have majored in Art History in college. This type of approach does nothing to endear the audience to abstract art and if anything it increases the width of the great chasm between the average person and contemporary art. In this context Mrs. Moody's honest and personable approach was fresh and comforting.

Moody began with personal background information and made sure the audience knew that she began with a very traditional arts education in Scotland where her focus was on observational painting. After relocating to the United States in 1982 she unexpectedly began working in non-representational collage. This move was unexpected because of her traditional training yet it was a path she would follow for the next 20 years. Her most recent work (and the body of work about which she was lecturing) is representational in that it begins with observations of her immediate surroundings but she has abstracted her imagery allowing the colors, forms, and spaces to take center stage.

The gallery was filled with large and small canvases Moody has covered with vibrant colors, strong lines, and implied spaces. Some paintings give way to pieces of landscapes or chunks of architecture and hints of interior and exterior light sources. Each painting tends to attract visual attention from across the room and the placement of the subject matter draws the viewer closer into illusionary space. The hints and nudges of almost recognizable objects play a cat and mouse game with viewer's need to interpret and solve each work of art.

After getting the historical items out of the way, Moody moved confidently into discussing how often viewers wonder about the validity of abstract art. She quoted people who had wondered aloud if they or their children couldn't produce something just as good with no artistic training. Reference was made to viewers who clearly thought that artists just threw paint at a surface and carelessly produced art with no meaning and then made up stories about it after the fact.

Moody did not dismiss these ideas as always false nor did she dismiss the people who had these thoughts about abstract art. She simply explained in the tone of a kind friend over coffee exactly how she went about the process of creating her paintings and exactly what she was trying to communicate in her work.

In describing that she almost always began by observing a specific physical location as the subject of a painting, she also touched on exactly why a certain location might lend itself to being the focus of a work of art. One idea she introduced was the idea that some places we experience in our personal lives retain some special meaning or importance to us. These places may be significant because of some event or personal experience we observe there but sometimes a place can just feel special to us for reasons we can not explain logically. Some are drawn to a stream in the mountains. Others are pulled by the tides to the seashore. On a smaller scale though, there may be locations we see everyday that retain this idea of significance. For some it could be a certain water tower half covered with vines that they pass on the highway commute. For others it may be a room in their home where they have tea and unwind by a window.

Moody spoke of a grassy field near her home, a particular view through a couple of rooms in her house, and the view from a window in Italy. She spoke of her feeling of closeness with each location and compared this feeling that defies logical explanation to the idea of "thin places" an idea held dear to the Celts in Britain and Ireland for centuries. She cited examples from poets and writers who defined these "thin places" as specific physical locations where the veil between the physical world and the spiritual world is very thin. These "thin places" were thought to allow overlap and passage between the two worlds. These places were the sites of ceremonies and gatherings held by the ancients and many are still spots frequently visited today. Moody suggested that these "thin places" may exist anywhere, even in our immediate surroundings.

A part of what Moody is attempting to do is explore just what makes these places feel so special. She is attempting to assess the physical and emotional contents of such places and to find ways to communicate those ideas to her viewers. Here is an example of the artist trying to find ways to convey her questions, ideas, and feelings to the viewer instead of simply passing along factual information. This seems to be one of the important aspects of high quality abstract art. Whereas a realistic rendering of a landscape or community may tell the viewer exactly what something looks like at a particular time, such a rendering will often fail at conveying a range of feelings or questions. For the abstract artist, being able to observe and render the subject matter accurately is not the ultimate goal, but rather it is the first step in a process of discovery and communication. Instead of simply making a statement of fact, the abstract artist is interested in engaging the viewer in a conversation and a transfer of ideas. The abstract artist is not saying, "That's the way it is" they are saying "Here's what I've been thinking about this idea, what do you think?".

This relationship between the artist and the viewer is one based on mutual trust. Sadly this trust has been broken over the years by poor quality artists who work under the guise of "abstract artist" when they are simply taking the easy route to making personal or political statements with their work and by viewers who dismiss abstract artists as people who have no real talent other than passing themselves off as real artists when they should probably be working as ad copy writers or political speech writers. Each breech of trust feeds the other in a continuous cycle. If this trust relationship is to be repaired it will be by artists like Marge Moody who are stunningly honest with their audience about what they are doing and why they are doing it.
Posted by e-sketchbook at 6:29 PM