my kid is more creative than you 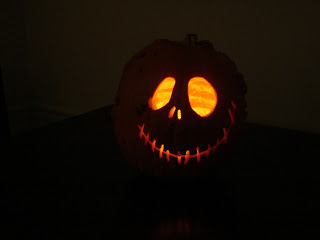 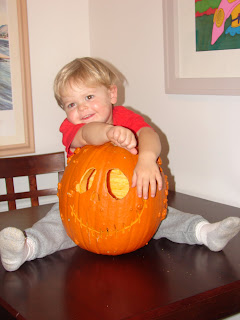 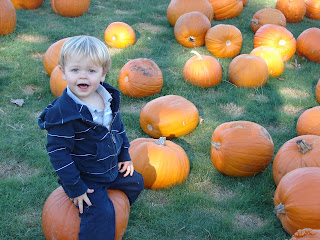 Ok, I'll admit he had some help with the carving. But if he had been properly trained in the use of sharp tools, I am convinced he would have generated a much more creative result.
This has nothing to do with the fact that I may or may not be biased when it comes to his super-intelligence and hyper-creativity. It has everything to do with his age and stage of development.
Many moons ago I endured a thorough round of education classes along with three years of art education classes under the teaching of Dr. Margaret Johnson. Since artistic exploration was closely connected with determining the developmental stages of children this was a topic we visited often. However, since I moved on to teach a much older age range, I've filed most of that information away into the darker areas of my brain. Lately though, I've been recalling much of that information as I've watched my son become good friends with his crayons.
As it turned out, it was not a crayon he used to demonstrate his amazing creativity. It was a biscuit.
We were enjoying breakfast for dinner the other night and he quietly began devouring his almost perfectly round biscuit. I watched as he took a semi-circle bite. Very intentionally he observed the remains and turned the biscuit 180 degrees. He paused briefly and took another similar sized bite. Then he proudly hoisted the twice bitten biscuit into the air high above his head and proclaimed: "It's an airplane!" Lots of airplane noises followed and then another pause. He turned the biscuit 90 degrees this time and said, "Oooooooh, it's a boat!"
Between the ages of 2 and 7 this type of uninhibited creativity flourishes in children as they begin to interact with and explore their environments. Studies consistently show that this creativity begins to decline during the elementary school years as children are taught conformity to rules and social expectations and perhaps begin to experience criticism in regard to their different thinking.
The students I teach are on the other end of this dip in creativity. Having escaped from high school, college students begin to show a marked increase in creativity as they are set free from the expectations of their primary schools and begin to experience higher levels of personal freedom. I often see students wrestling with this as they try to hold on to the comfort of thinking that there are "right answers" and formulas that work in all situations. Many of them...many of us...have a long way to go in order to get back to the point where a biscuit is not just a biscuit.
Picasso said a lot of crazy things, but one thing he said still holds weight with me. He said, "I spent the first half of my life trying to learn how to draw like an adult and the last half of my life trying to learn how to draw like a child."
See, even Picasso thinks my kid is more creative than you.

connor blue and the biscuit, (the new title of this entry) jk